Here's how to identify every important cable for use with computer monitors.

Use it for: Connecting TVs and computer displays to PCs, gaming consoles and other larger devices

If you have a choice, select it instead of: DVI, VGA, component video

It adapts to: VGA, DVI

The standard connector for most audio-visual applications over the past decade or so, HDMI was the first cable to efficiently bundle audio and video for devices like PCs and gaming consoles to send to a display.

Use it for: Connecting laptops and devices to larger monitors

It's similar in performance and use to: HDMI, Thunderbolt 2

With its thin form factor and all-in-one (power, data, video/audio) capabilities, USB-C is becoming the port of choice on laptops looking to stay on the cutting edge as well as the standard on mobile devices. Plenty of third-party adapter options exist to match this port to any existing tech and its rapid uptake means that if you don’t know by now, you need to check out our primer.

USB-C is the prevalent port option on new Apple computers and is gaining traction on laptop PCs, with their adoption of Intel’s Thunderbolt 3 standard allowing Thunderbolt-equipped USB-C ports to push graphics to two 60hz monitors, or one at 120 hz.

Thunderbolt 3 (signified by a thunderbolt logo as opposed to the traditional USB logo for USB-C) is capable of transmitting data up to four times faster than USB 3.1, and bundles the full DisplayPort AV standard along with its other capabilities. While less widespread for gaming due to the average refresh rates, Thunderbolt is one of the few standards capable of delivering 60hz. 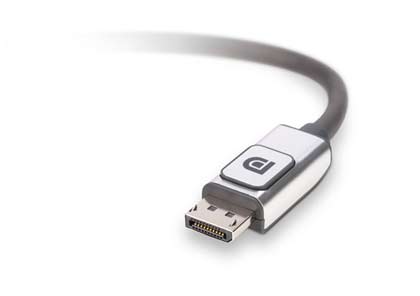 Use it for: Connecting recent computers and AV components to displays

If you have a choice, select it instead of: VGA

It's similar in performance and use to: HDMI

It adapts to: DVI and VGA (pass-through signal); Mini-DisplayPort; HDMI

Similar to HDMI, DisplayPort carries both digital audio and digital video signals. While not as widely used on televisions as HDMI, DisplayPort is designed to support higher resolutions and refresh rates out of the box and thus features alongside HDMI as standard on modern gaming monitors.

DisplayPort also supports HDCP copy protection, as the other digital signal options do - a silent requirement for most copyrighted video streaming content today.

Use it for: Connecting small devices to displays

If you have a choice, select it instead of: VGA

It's similar in performance and use to: DisplayPort, HDMI

It adapts to: DVI and VGA (pass-through signal); DisplayPort; HDMI

A small version of DisplayPort designed by Apple, this connection is most often found on previous generation Apple laptops. Mini DisplayPort is generally being phased out as USB Type-C gains popularity, due to its aforementioned combination of the DisplayPort signal for video and audio with the ability to transmit power.