It's hard not to look at the new 24-inch iMac, which I've been using for the past week, and not feel at least a little pang of nostalgia for the original iMac. Introduced in 1998, not only did the iMac G3 save Apple, it injected a blast of color into the beige world of personal computers.

That sense of nostalgia lessened when I picked up the new 24-inch iMac and carried it around my house. (The original iMac weighed about four times the new model!) And yet, for all that has changed over the past 23 years, you'd be surprised about some of the similarities between the original iMac and these new models.

The return of color 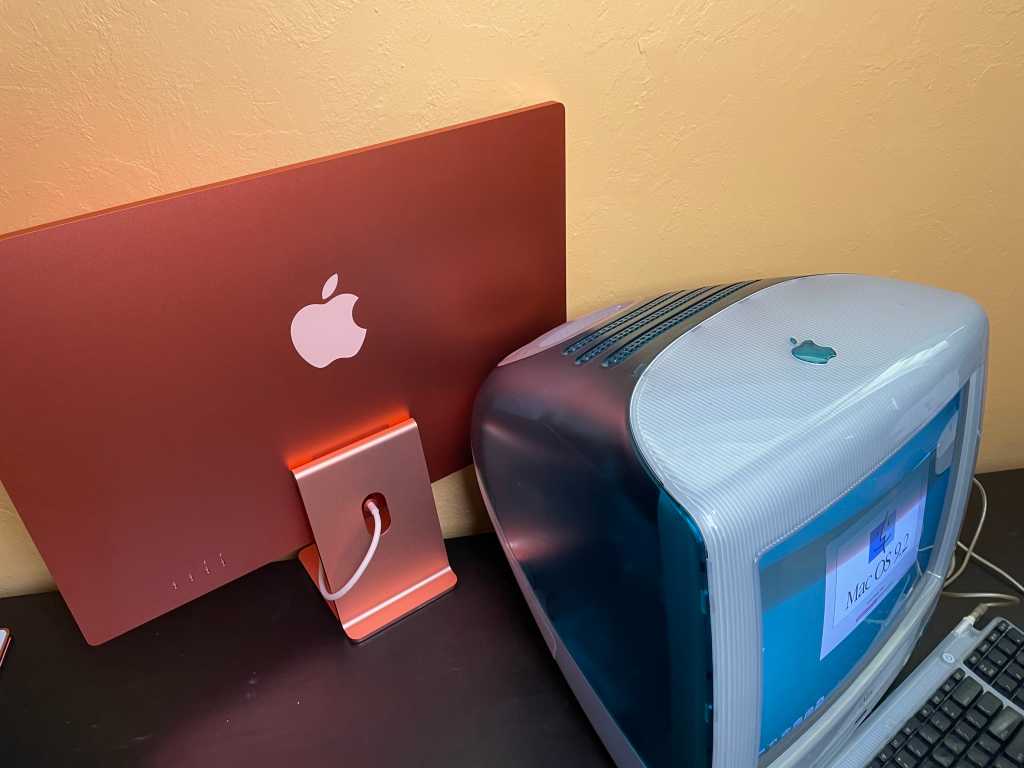 Once Apple replaced the iMac G3 with the sunflower-like iMac G4, color was banished from the Mac for many years. iMacs were white plastic, then eventually varying shades of silver aluminum. But the original Bondi Blue iMac (named after the water off Sydney's Bondi Beach)—and its successors in blueberry, lime, tangerine, strawberry, grape, sage, ruby, and indigo—has finally had its revenge.

Like the original iMac, the 24-inch iMac is meant to be shown off, not hidden away. Back in the 1990s, computers were beige towers or boxes shaped like pizza boxes, usually attached by a rat's nest of cords to a boxy beige monitor and a couple of beige speakers. Computers were utilitarian, had no personality, and were meant to be used and ignored.

The original iMac had style and begged for you to make it the centerpiece in your office or family room. Later generations of the iMac G3 added color choices and became a way to express style and personality. The 24-inch iMac brings back that same feeling.

The model Apple sent me was just what I had asked for—namely, orange. I love it. It looks amazing. I can't walk into a room where it's set up without thinking, I can't believe Apple made an orange iMac. It boggles my mind. But here's the thing: if you don't like orange, no problem! There's also pink, blue, green, purple and—for the very first time, because who wants to buy an iMac called lemon?—yellow.

Here's a lesson Apple learned the last time it made colorful computers: Not everyone has a preference for one. Apple was so excited about bringing color to the Mac, it even made a professional Mac tower, the Power Mac G3, out of bright blue plastic. Professional users revolted, and Apple relented: The Power Mac G4 was gray, and even future iMac G3 models came in sedate non-colors like graphite and snow.

That was a hard lesson learned and not forgotten. While Apple is clearly excited about offering the 24-inch iMac in six bright colors, it's also making the computer available in the same silver shade that iMacs have worn for 14 years now. Early reports suggest that silver is the second most popular color, after blue. While I am a real champion of brightly colored Macs, offering a neutral choice is the right thing to do. 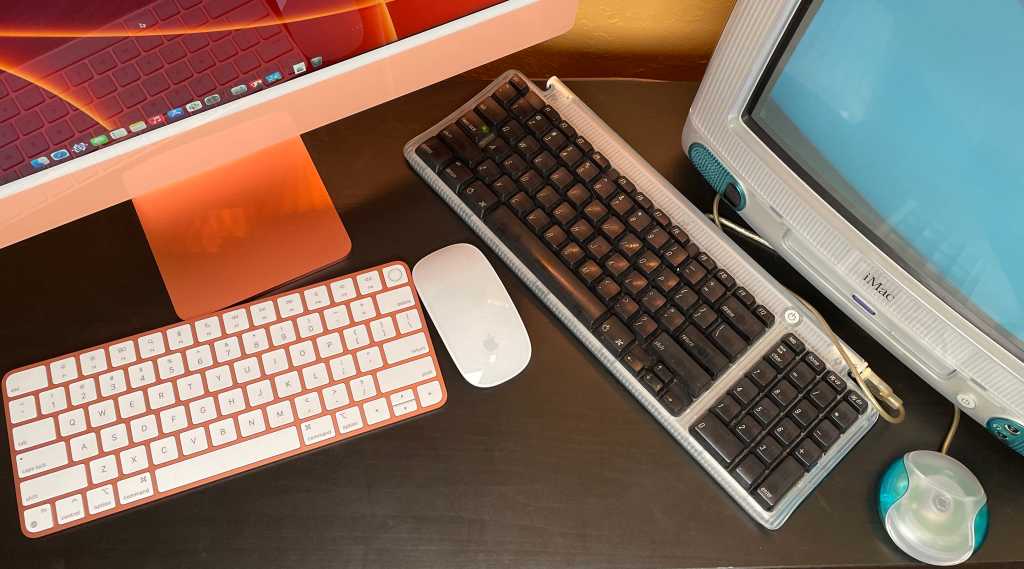 The original iMac wasn't the only thing that Apple made that was Bondi Blue. It made a keyboard and mouse that matched. And in that spirit, the 24-inch iMac has a wide array of peripherals, all available in six colorful shades, plus good ol' silver.

This has got to be a nightmare for the company's supply chain, but while Apple is much larger than it was in 1998, it's been slowly introducing more iPhone models in more colors. Apple knows how to do this. (It helps itself out by limiting the purple, orange, and yellow models to online orders only.) 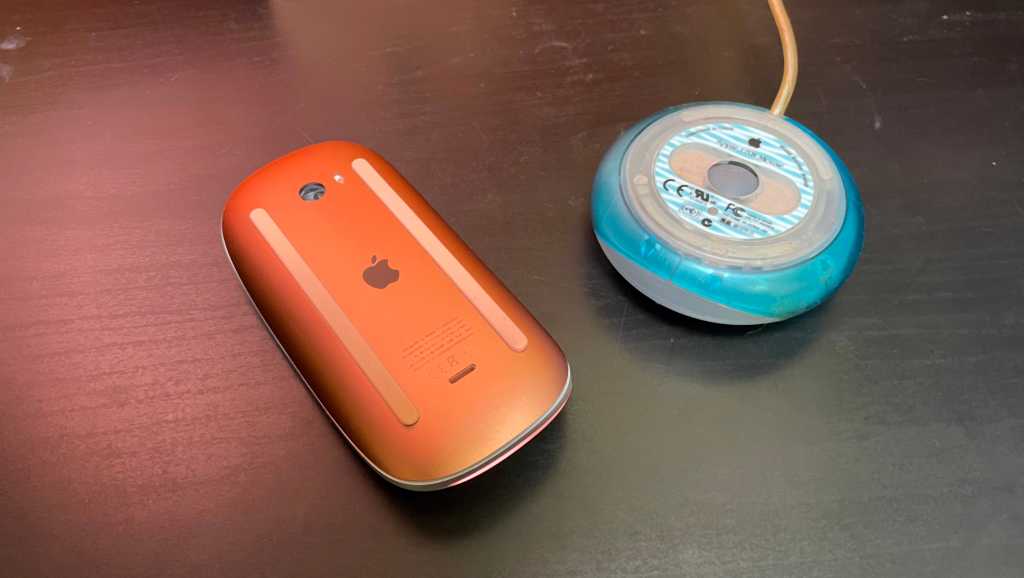 The original iMac mouse (right) doesn't have a lot in common with the new model, but they're both colored to match their iMacs.

Still, this is taking what Apple did with the original iMac to a whole new level. There's not one colorful keyboard model, but three! The $1,299 iMac comes in only four colors and has a basic Magic Keyboard. Beyond that, though, there are seven different color options for the Touch ID keyboard, and seven Magic Trackpads, and seven Magic Mouses. Throw in international keyboard layouts and things get very complicated very quickly!

It gets even more complicated. The 24-inch iMac ships with a USB-C-to-Lightning cable for pairing peripherals to the iMac. That cable, which has a braided cover—making it the nicest Lightning cable Apple has ever made—also comes in seven colors. And the magnetic power attachment on the back of the iMac is similarly braided and colored, meaning that there are seven versions of that cable. (It's actually 11 versions, because the $1,299 model ships with a power brick that lacks an ethernet port and there are four colors of that one.) 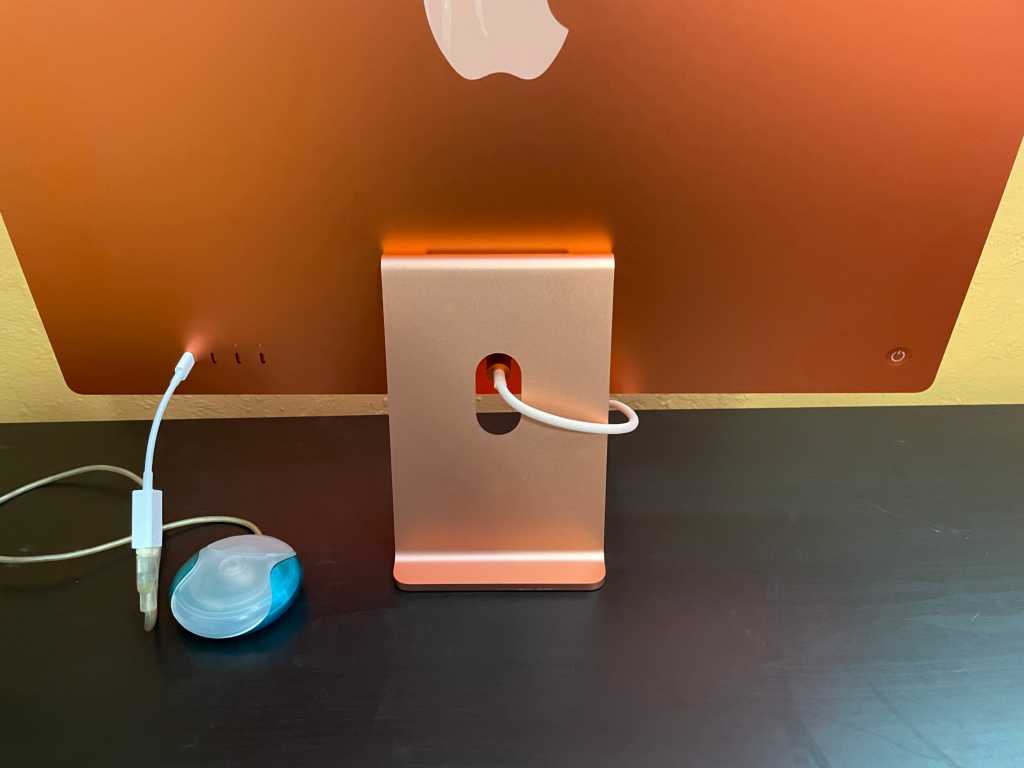 You can attach the original iMac mouse to the new 24-inch model, but now you'll need an adapter.

While I'm discussing peripherals and cables, it's worth noting a huge similarity between the two iMacs. The original iMac marked a clean break from previous Mac peripherals by dumping all old ports and replacing them with a shiny, new port type, USB. Since then, every iMac has had at least one of those blocky, non-reversible USB-A ports—until the new 24-inch iMac. Like the original, the new iMac dumps the old ports like USB-A and only has USB-C-style connectors (two with Thunderbolt), and the more expensive models have two additional USB 3 ports.

The iMac is always about the display 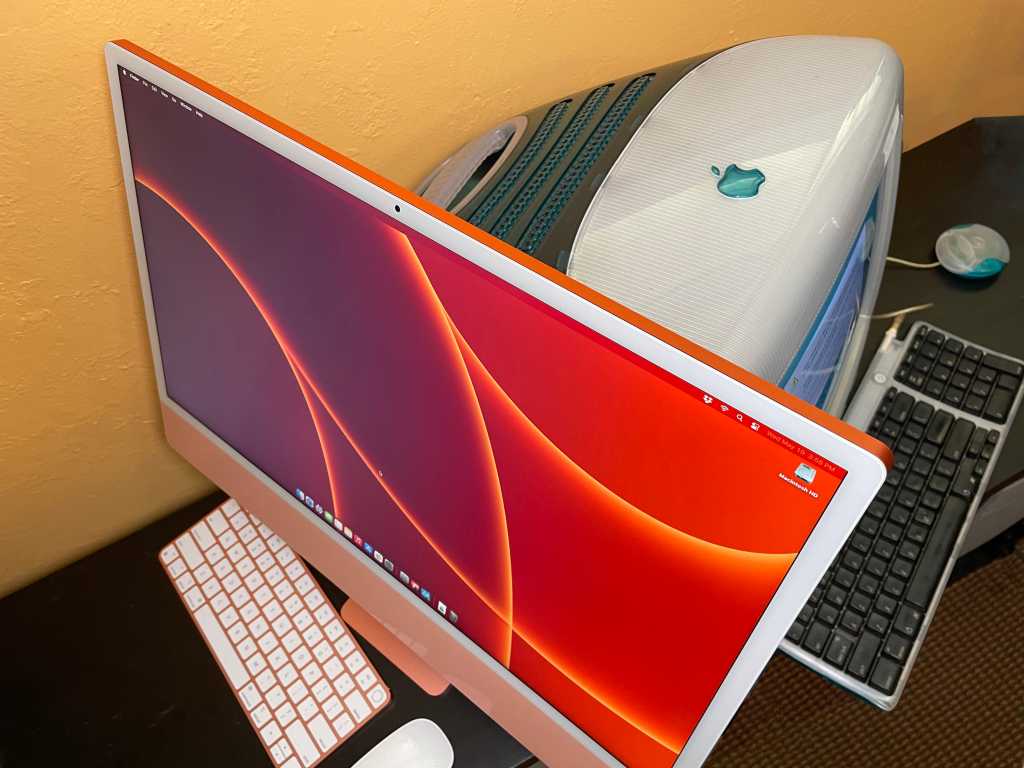 If there's been one fundamental of iMac design through the years, it's that the display is at the center of things. For the original iMac, that was a bulbous CRT. But Apple's design embraced the CRT, exposing its wiring via translucent plastic, and curving the entire iMac around the shape of the back of the tube.

The advent of flat-panel technology allowed Apple to try something different with the iMac. The iMac G4 stuffed the computer in a half-sphere, with the screen floating above on a chrome arm. It's a gorgeous design, but as flat screens got bigger and heavier, it turned out to be an untenable one. So in 2004, Apple redefined the iMac as a single flat slab on a stand, a display and a computer all wrapped up in one.

That was probably a tough decision, and while it was pragmatic, it had one huge tradeoff: the iMac was thick. Over the years, Apple has tried to get it thinner, but even the most recent move to a unibody aluminum enclosure kept a lot of bulk and tried to hide it by tapering the edges of the iMac.

In some ways, the 24-inch iMac feels like a mixture of the idealism of that floating iMac G4 design and the pragmatism of ensuing models. It's shockingly thin and light and entirely flat, making it feel more like a 24-inch iPad on a stand.

But the important point here is that phrase,starts at. When Apple began selling the original Bondi iMac, it was one of a kind, but the company realized there was money to be made by offering a variety of models at different price points. Eventually there was the iMac DV, the iMac Special Edition, and of course the original, bargain model.

When there's money to be made, today's Apple does not miss a beat. While the $1,299 price for the 24-inch iMac is nice, that model has limited color options and you'll need to pay more if you want an ethernet port or a keyboard with Touch ID. Add in 2TB of storage and 16GB of RAM and you can very quickly take that $1,299 computer up to $2,549. This is why Apple has all the money.

A time of transition for Apple

Maybe color on computers is like fashion, a trend that recurs every 20 years or so. But I do wonder if it's no coincidence that the original iMac and the 24-inch iMac come at times of transition in the Mac.

Back in 1998, Steve Jobs had just returned and was trying to keep Apple afloat—he did, thanks to the iMac. The iPod followed, then the iPhone, and the rest is history. But Jobs returned to Apple because the company had bought his company, NeXT, in order to take its software and transform it into the next-generation Mac operating system. The original iMac shipped with Mac OS 8.1, but everyone involved knew that Mac OS X was taking shape in the background and that would define the future of the platform.

Things aren't quite as fraught today as they were when the first iMac arrived on the scene, but this is still a momentous time for the Mac. The 24-inch iMac is the first Mac to be completely redesigned around an Apple-built processor. MacOS is changing rapidly, picking up features and software from iPadOS. The tools that developers use to build software for Apple's platforms runs only on macOS, but most of those developers are building iOS apps, not Mac apps. Apple seems to be trying to address this by offering ways for software to reach across all of Apple's platforms, but will that strengthen the Mac or erase what makes it uniquely the Mac?

The new iMac, like the original, has the fortune to live in interesting times. Things may be a bit stressful and unsure, but at least we can look at the pretty colors.