Apple added an Internet Sharing option in the Sharing system preference many years ago. This feature lets you share one Mac's incoming internet connection via other network interfaces on that Mac. At one point, this was a popular way to create what was once called a software base station and now is more generally called a personal hotspot.

But it's also a great way to bridge your network if you have an older Mac with either broken, missing, failing, or weak Wi-Fi. As Apple has matured its line-up of computers, it has also upgraded the flavors of Wi-Fi supported. Macs older than five or so years include slower, older versions of Wi-Fi and network cards that have weaker signal transmission and reception as well as radios with less tolerance in sorting out overlapping signals.

Ethernet and Internet Sharing offers one way to fix that if you have an easy enough way to connect two desktop Macs with ethernet ports. (You can connect laptops, too, but then this solution works only when the sharing Mac is present.) If either Mac lacks ethernet, you can add it through a USB-C or Thunderbolt 3 dock for newer Macs or a USB adapter or Thunderbolt 2 adapter or dock for older Macs.

Set up Internet Sharing so that one Mac relays Wi-Fi based Internet access to another via Ethernet. 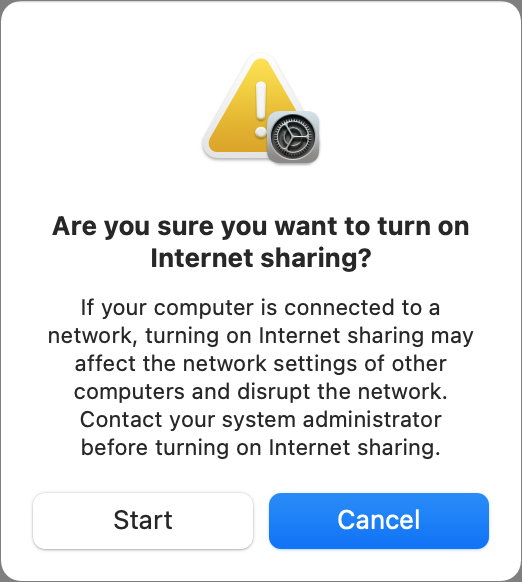 The warning alerts you to the potential of disrupting your network.

This sharing system generates an IP address for the Mac with which its connection is shared, and manages relaying data to and from the internet for that other Mac. It also allows a direct full ethernet speed connection between the two Macs connected in this fashion.

This Mac 911 article is in response to a question submitted by Macworld reader Julian.

Help Secure your System with Norton
More from Norton LifeLock