The Apple Watch Series 7 is here…kinda. Apple unveiled its latest watch at its California streaming event, but the company did not announce when it will be available for purchase, and that it won't start shipping until later this fall.

That just means you have some time to take a close look at the Apple Watch Series 7. In fact, the Series 6 is still the only flagship Watch you can buy, so you might be able to find a really good price on it before the Series 7 hits shelves. So if you have an older Apple Watch and you want to upgrade, or you're looking to buy your first Apple Watch, don't automatically count out the Series 6. Let's take a look at how the two models compare.

The Series 7 features a design that's still based on a square, but it's a tiny bit more rounded at the corners than the Series 6. Unless you're wearing them together, you probably won't even notice the difference.

The major noticeable difference is the Series 7's larger display. The Series 7 is available in 41mm and 45mm sizes, up from the Series 6's 40mm and 44mm. Consequently, the bezels around the screen are much smaller on the Series 7. In addition to bezels that are 40 percent thinner, the Series 7's display has has a wraparound effect to give it a true edge-to-edge feel, all in a case that's not much bigger than the Series 6.

Both the Series 7 and Series 6 have always-on displays, but the Series 7 is 70 percent brighter indoors, according to Apple.

Our pick: If you always thought that the Apple Watch screen isn't big enough, then the pick is obviously the Series 7. 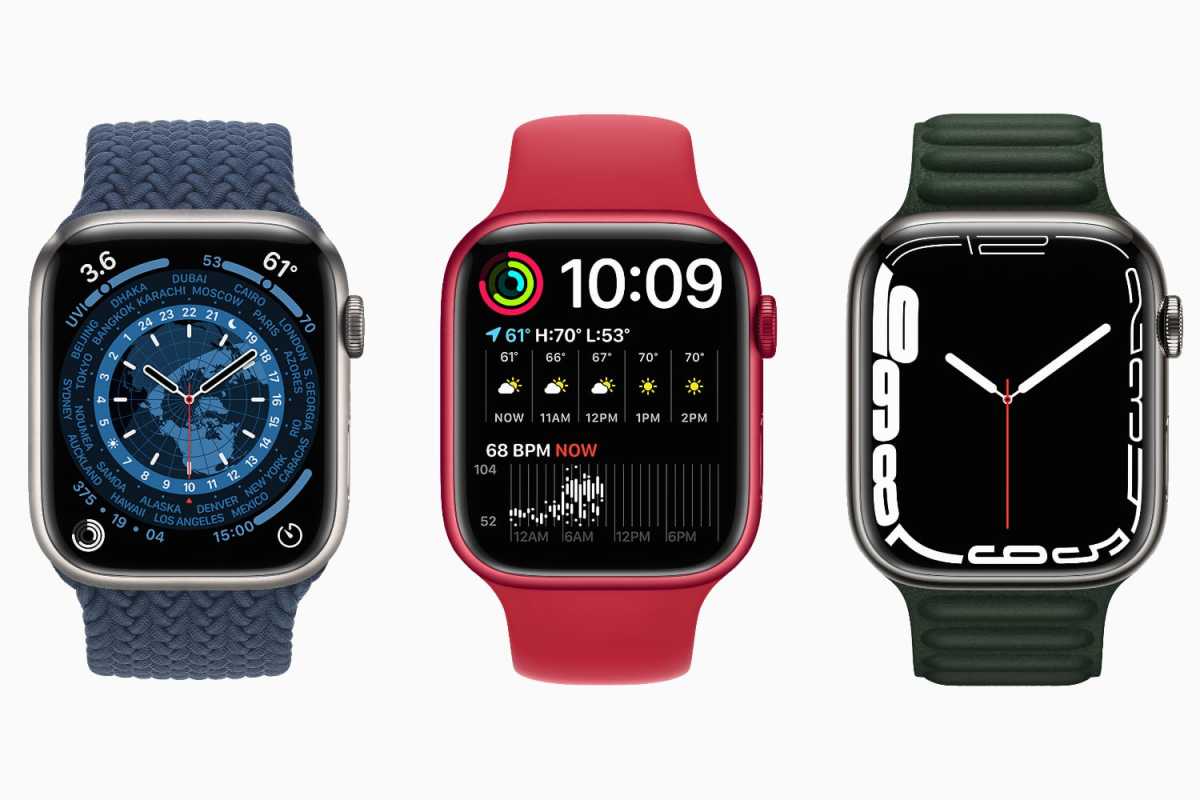 The Apple Watch Series 7 has special watch faces that take advantage of the larger screen.

The Series 7 features a thicker front crystal display that makes it stronger and more scratch- and crack-resistant than the Series 6. The Series 7 is also certified at IP6X dust-tight resistance, while the Series 6 doesn't have such a certification. Both watches have a water-resistance rating of 50 meters.

Our pick: The Series 6 is by no means delicate, but users who find themselves in extreme situations will have better peace of mind about the Series 7 watch. For everyday use, the Series 6 is fine.

While both watches run watchOS 8, the Series 7's screen makes a big difference across the interface. Apple has tweaked watchOS to take advantage of the larger display so it now has a full keyboard for texts and typing, something you won't find on the Series 6. Additionally, buttons are larger across all of Apple's apps, making them easier to tap. The Series 7 also has two unique watch faces, Contour and Modular Duo.

Our pick: The differences may be small, but that Contour face is incredibly cool. And if you find on-screen elements on the Apple Watch hard to see or tap, you'll want to go for the Series 7.

Both watches are available in aluminum, stainless steel, or titanium. The color offerings for the aluminum models are different between the two models. Here are the color choices.

As for bands, all of the Series 6 bands are compatible with the Series 7 watch.

Like the Series 6, Apple is also offering Nike and Hermès versions of the Series 7. The Nike Series 7 is available in three colors and includes a refreshed Nike Sport Loop band and the Nike Bounce watch face. The Hermès Series 7 models include the Gourmette Double Tour and the Circuit H, and new colors for the Classic, Attelage, and Jumping Single Tour models.

Our pick: The Apple Watch is all about style and personal taste, so get the model that reflects your personality. But if you really want a green watch or the new Starlight color, the Series 7 is the only option. 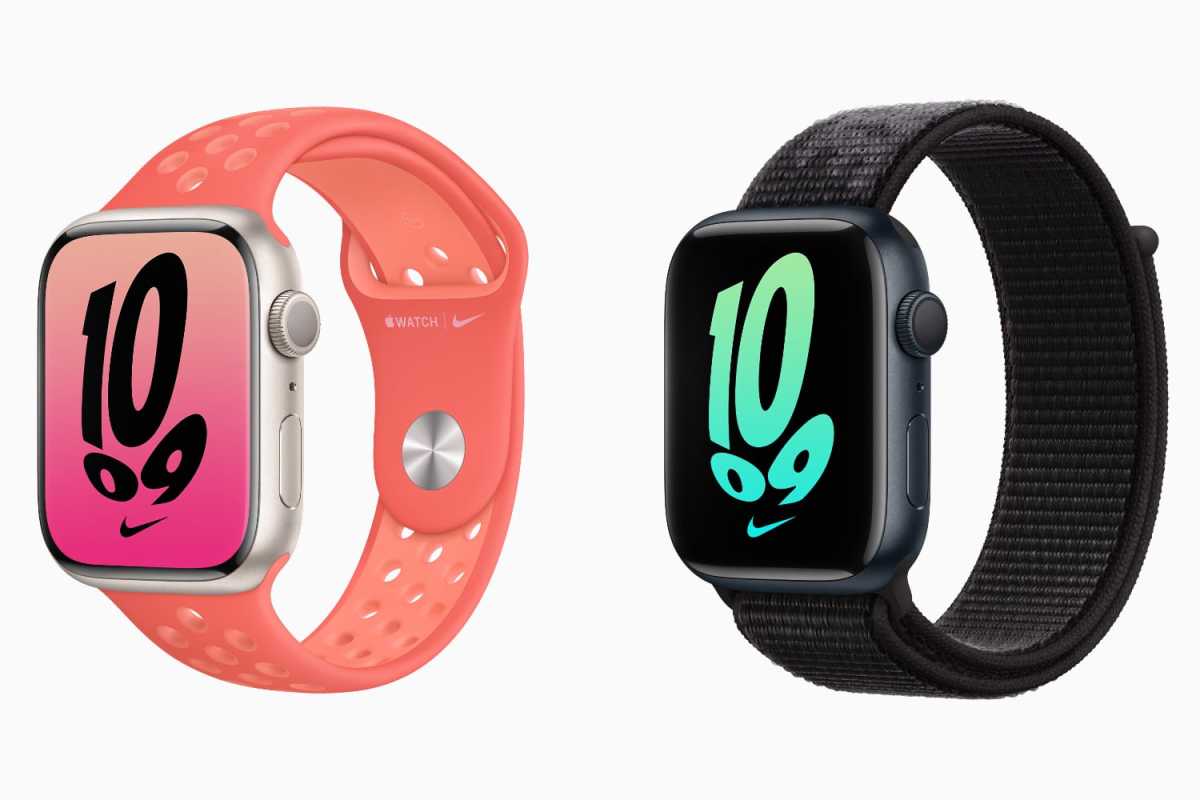 Apple didn't make any CPU performance claims at the Series 7 watch unveiling and doesn't identify the Series 7's CPU on its website. Reports say that it has the same S6 processor as the Series 6 watch—or possible a very slightly improved S7 chip. That's not a bad thing—in our review of the Series 6, we said that compared to competitors like the Fitbit Versa or Galaxy Watch, the Apple Watch will feel like a revelation. Our thoughts haven't changed since that review so we expect the Series 7 to be plenty fast and powerful.

The watches also both have the same LTE chip for cellular connectivity, so if you're looking for 5G, you'll need to wait for the Series 8.

Our pick: So far, we don't know of any tweaks the Series 7 CPU may have to differentiate it from the Series 6 and we assume Apple would have told us if they were categorically different. They should both be quite capable watches with snappy performance.

The Series 6 Apple Watch has the same 18-hour battery life as prior models, and we assume the Series 7 does too. That's enough to get you through the day, but if you want to do sleep tracking, you're going to have to charge the watch.

That's where the Series 7 has a serious advantage. Apple's new watch supports fast charging via a new USB-C charging cable, which Apple claims will charge 33 percent faster than the Series 6. When you need to charge it, Apple says it only needs to be connected to its charger for eight minutes to be able to cover eight hours of sleep tracking.

Our pick: The Series 7 is the choice if sleep tracking is a top priority, or your usage is super demanding and often need to charge in the middle of the day. With lots of small improvements, the ability to fast charge is a big advantage for the Series 7. 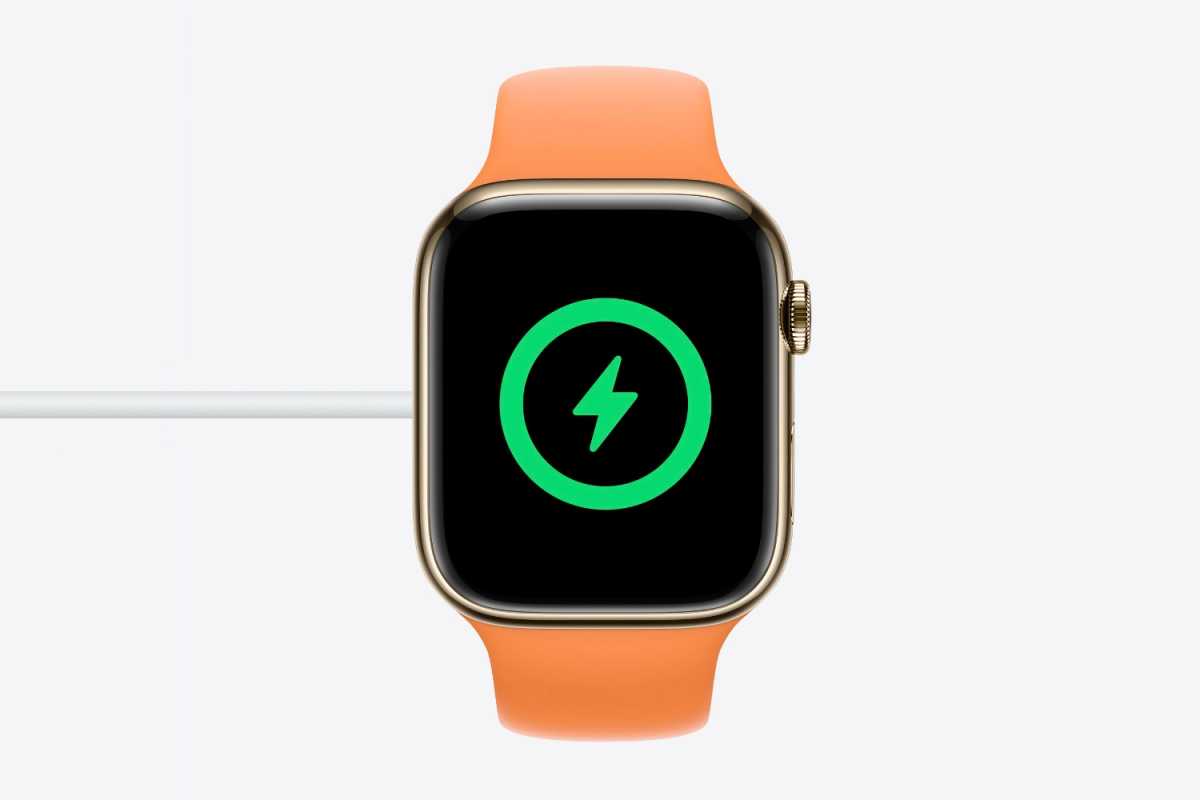 The Series 7 charges faster than any other Apple Watch.

For the first time between generations, is no difference between the two watches when it comes to health and fitness tracking. Here's what you get:

During the Series 7 unveiling, Apple showcased the Series 7's expanded fall detection, which can now sense an improper fall during a workout and can call emergency services if needed. However, this is a watchOS 8 feature not specific only to the Series 7 and should work just as well on the Series 6 and other watches, too.

Our pick: Since the sensors are the same, you can't go wrong with either watch.

We have incomplete information here. Apple announced that the Series 7 pricing starts at $399, which is currently the starting point for the Series 6. But we don't know what the prices will be for the different variations you can get, like the different case materials, the cellular option, bands, and other options. Based on the starting price, we assume that the various Series 7 options will be priced similarly.

But one thing is certain to happen: When the Series 7 is officially released, the Series 6 will be discontinued. You might be able to find a discounted price on a new Series 6, but you'll have to turn to a third-party retailer, such as Best Buy or Amazon. You'll also likely be able to buy a refurbished Series 6 at Apple's Refurbished and Clearance store.

Our pick: All things being equal, the Series 7 is the smarter choice. But if you're looking to save some cash, you'll likely find the Series 6 for less if you shop around, especially after the Series 7 hits shelves. We've seen the Series 6 discounted by as much as $120 and we expect the discounts might be even greater once the new model lands. The two watches are similar with some big differences, but it might be hard to pass up the deep discounts the Series 6 is likely to see.