Android apps are now available on Windows 11 as well as on Chrome OS. Microsoft and Google use them to expand and enhance the experience of their respective touchscreen devices. The hope is that Android apps, which are designed primarily (and often entirely) for touch input, can patch up the holes of each operating system's mouse-oriented interface and app selection.

Which operating system offers the best Android app support? And does either achieve its goal of enhancing the touchscreen experience?

Windows 11 and Chrome OS both support Android apps but make them available in very different ways. Windows 11 leans on the Amazon Appstore, while Google supports its own Google Play store.

Google's Play store is essentially the default Android app store. You'll find it installed on a large majority of Android devices sold today. The Amazon Appstore is an alternative from Amazon for its own devices, such as Kindle tablets. 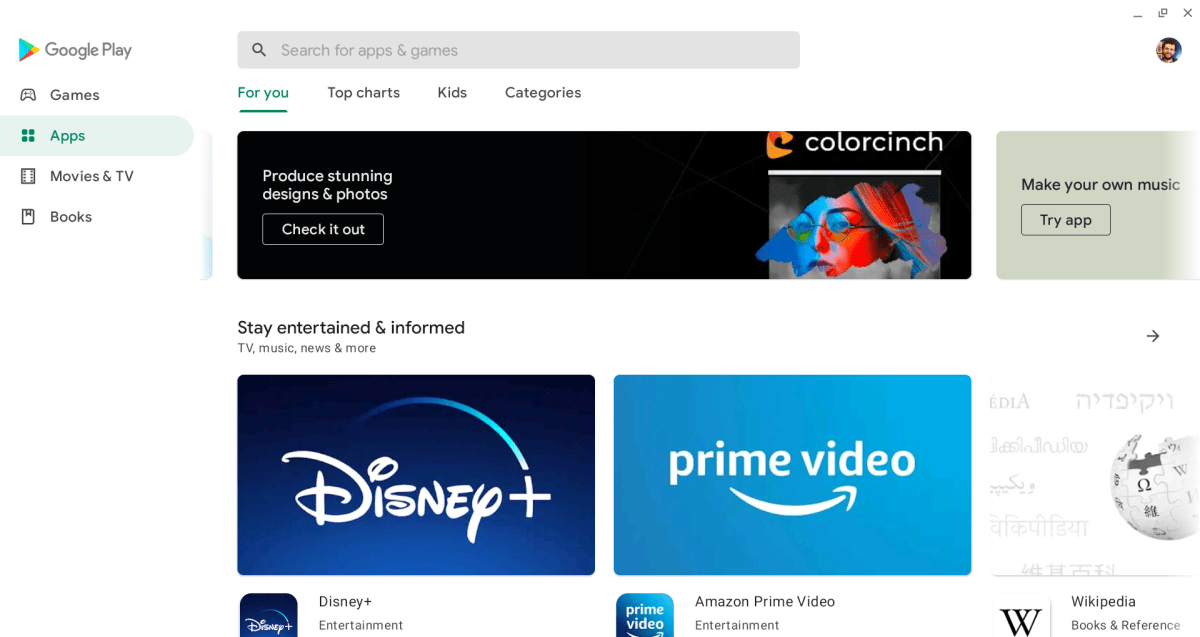 It's unlikely you won't find what you're looking for among the millions of apps in the Google Play store. Image: IDG

This already skews selection in favor of Chrome OS, but Windows 11 has another problem: It currently supports a tiny sliver of all apps on the Amazon Appstore. You'll find a list of just 50 apps and, frankly, it's dire. TikTok, for example, was shown at the Windows 11 reveal but is not yet supported. Instead, you'll find five different versions of My Talking Tom. 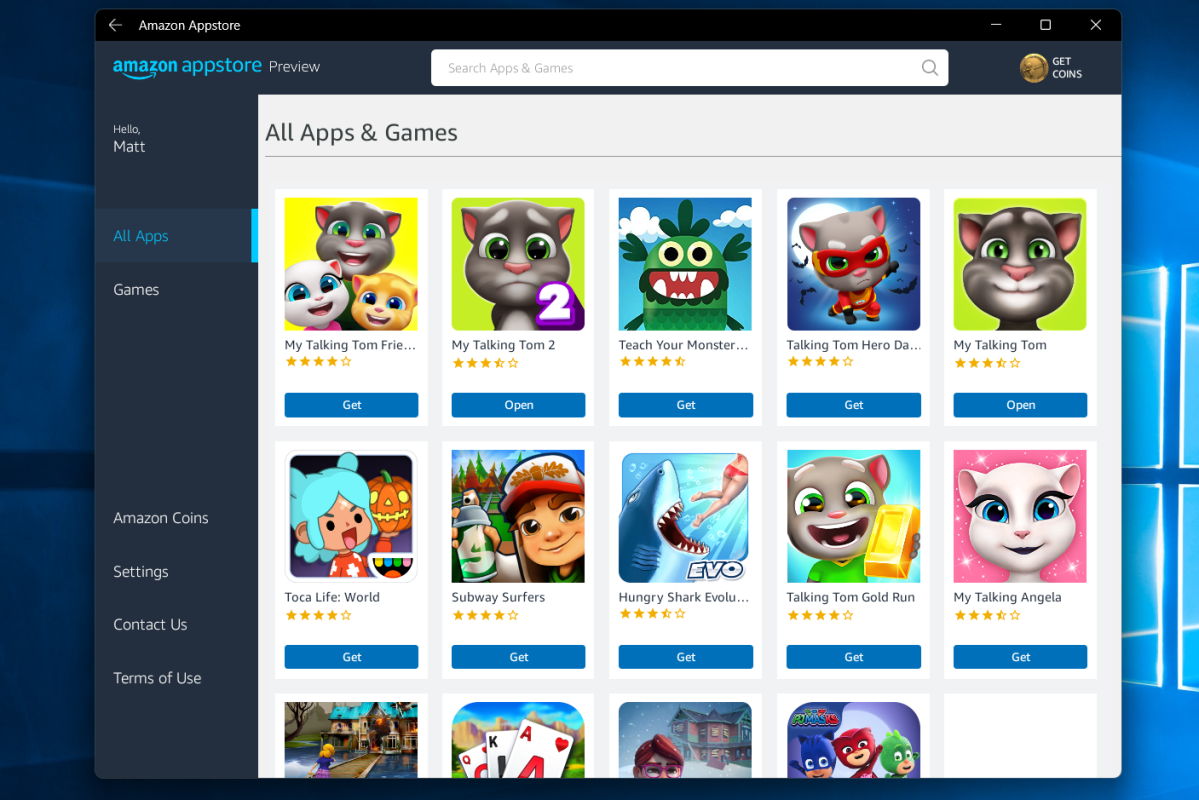 The Amazon Appstore can be hit or miss. Image: IDG

This hands Chrome OS an easy and significant win over Windows 11. Android app support isn't useful if the apps you want aren't available. Odds are you'll encounter that exact problem while trying to use Android apps on Windows 11.

Microsoft pulled a bait-and-switch with its announcement of Android support for Windows 11. The company made it a key point in its Windows 11 announcement, yet it was nowhere to be seen when Windows 11 was released.

It remains unavailable to most users. You must enroll in the Windows Insider program, install a Windows 11 preview build, update the Microsoft Store app, then search for and install the Amazon Appstore from the Microsoft Store. Microsoft hasn't said when Android app support will reach full release.

Chrome OS, by contrast, has offered Android app support for years. The Google Play store is integrated into Chrome OS and has a shortcut on the operating system's taskbar.

Opening the Google Play store automatically logs you in (if you're logged in to Chrome OS) and you can immediately download apps. It will prompt you to re-download apps you've previously downloaded to another Chromebook, which is helpful when you switch machines. 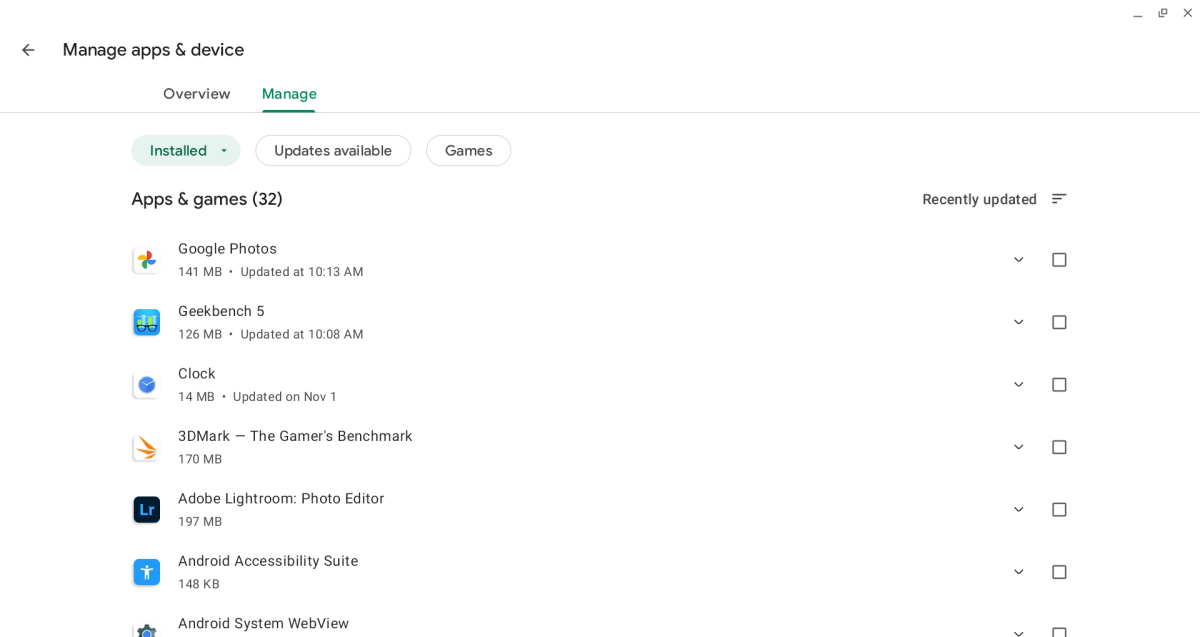 Downloading and managing apps in Chrome OS is very straightforward.

Chrome OS has another subtle but significant advantage: The Google Play store is the only store on the device and the only method for installing new apps (aside from side-loading). Installing and managing Android apps is simple because the OS doesn't provide an alternative. The Amazon Appstore on Windows 11 is only accessible by first using the Microsoft Store and manages apps separately.

It's another easy win for Chrome OS. Users don't have the option to choose between using a desktop or mobile app and don't have to juggle different stores. Windows users will struggle with the fact that Android apps are a subset of a subset of apps available for the operating system. 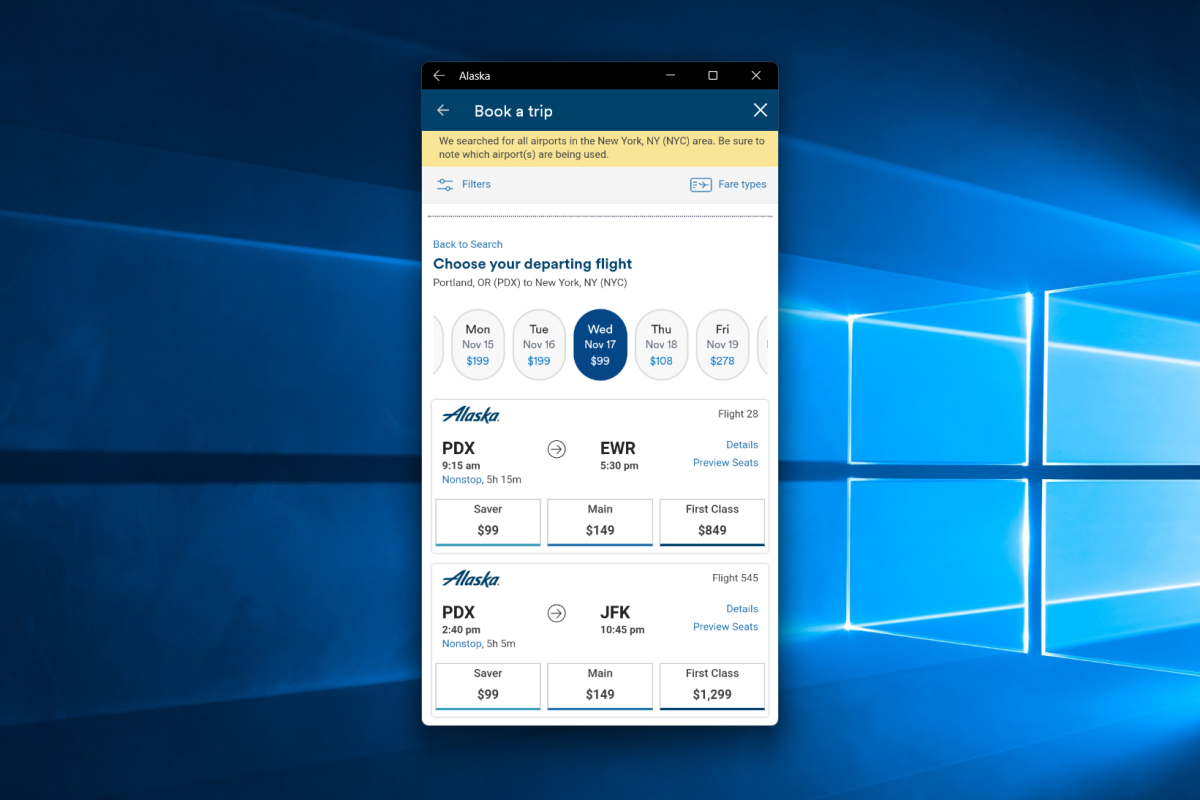 An Android app as seen in Windows 11. Image: IDG

Launching an Android app on Windows 11 will open the app in a standard app window. Android apps function like Windows UWP apps from the Windows Store. They work in Windows 11's various interface features, including tab previews and Windows Snaps.

Apps can be resized and most scale well, though 3D games stick to a smartphone orientation. This can lead to weird results when using Windows 11 features designed for resizable apps, such as Windows Snap, as the Android app won't resize to fit the available space and instead be surrounded by transparent borders.

Chrome OS also opens Android apps in a standard app window, and apps can be used like any other Chrome OS app. Unlike Windows 11, Chrome OS locks applications to smartphone orientation by default and the window can't be resized. Some apps will let you switch to a tablet-sized window, something Windows 11 does not offer, or resize the app as you desire. 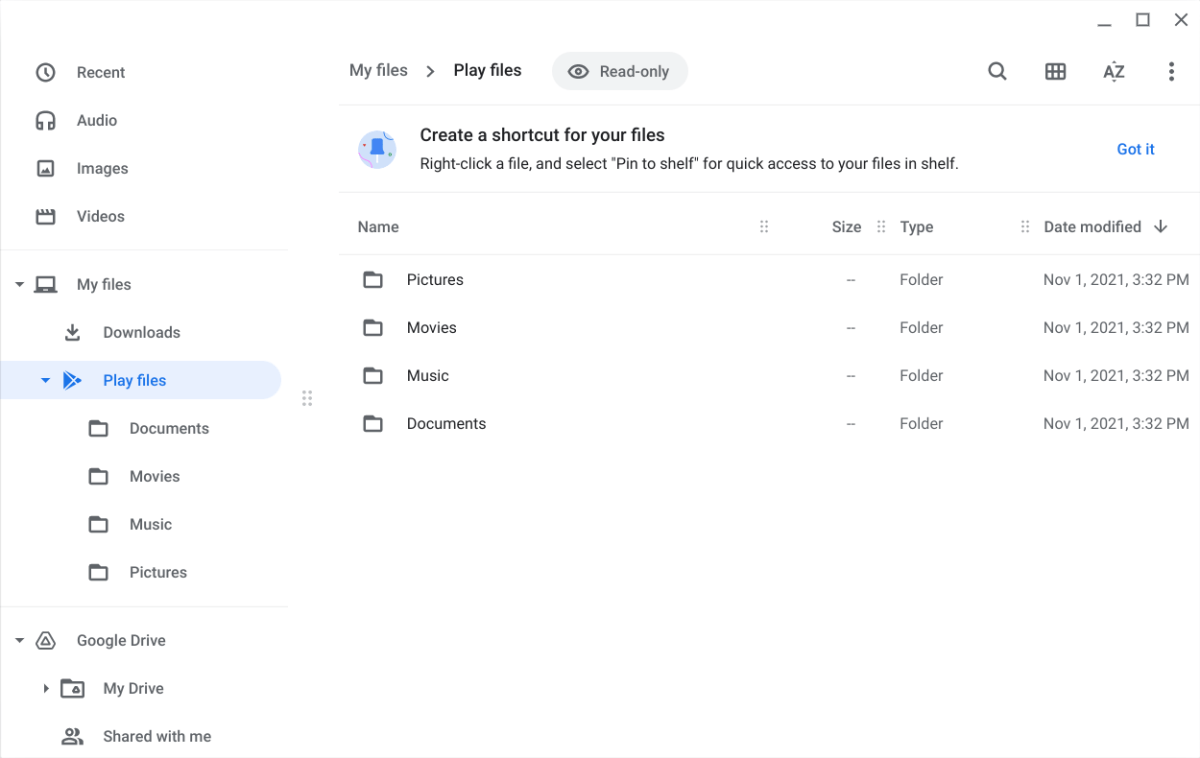 Files can be downloaded and accessed from Android apps in Chrome OS, via the Play Files folder. Image: IDG

Touch support is a disappointment on both operating systems. A touchscreen is arguably the preferred way to use Android apps on Windows 11 and Chrome OS, but it's still not a great experience. A laptop or 2-in-1 has a larger, less pixel dense display, so apps look unimpressive and interface elements seem too large. Scrolling through a timeline or selecting multiple photos will never feel as responsive as on a mid-range Android smartphone.

Chrome OS takes another win here, but it's nothing to brag about. The peculiarities of running apps designed for Android smartphones make for a mediocre experience. It's also worth remembering that while Windows 11's Android app functionality is limited, it has a huge library of Microsoft Store and legacy Windows apps not available to Chrome OS. Running the Android version of Photoshop Express on a Chromebook is no substitute for Photoshop on a Windows 11 PC.

Android apps do not run natively on either Chrome OS or Windows 11. Both operating systems apply some (surprisingly different) behind-the-scenes techniques to enable support. A performance penalty applies to both, but is it enough to make a difference?

That depends on your use.

Most modern Android smartphones are far more capable than required by most apps you might use. The Windows 11 and Chrome OS devices I used for my testing had at least an 8th-generation Intel Core i3 processor with more than adequate performance for most situations. I found that all apps launch quickly and respond to either mouse or touch input with no significant lag.

Ask more of an app, however, and you may run into problems. Scrolling through filters in Adobe Photoshop Express on Chrome OS, for example, was less responsive and smooth than on a modern Android smartphone. The app was usable, but felt a step behind my input. Filters and other image adjustments could take a second or two to apply.

3D can be an issue. Popular Android games like Genshin Impact and Pokemon Unite will launch on Chrome OS, but on the Chromebooks I've tried, they freeze before I can get into gameplay. Even Hearthstone froze and crashed at the login screen. 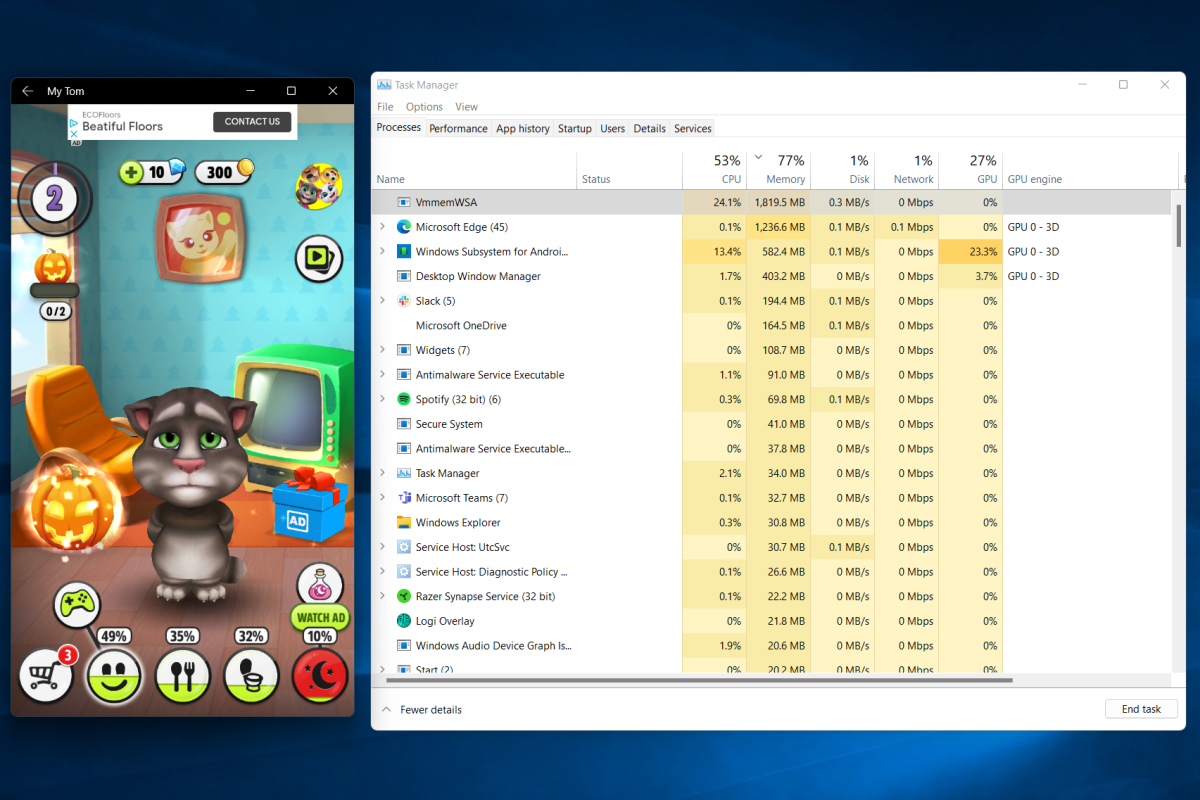 Android games can be surprisingly taxing on Windows 11.

Android app performance in Windows 11 is more difficult to judge due to the slim selection of apps. The apps currently available are not demanding. With that said, I noticed that My Talking Tom placed a surprisingly heavy load on the processor, providing reason to be pessimistic about more demanding 3D apps.

Android apps are better on Chrome OS than Windows 11, but that doesn't make it a winner

Android app support in Chrome OS easily beats the state of Android apps on Windows 11. Microsoft's efforts are little more than an interesting novelty. It's possible that Microsoft will close the gap, of course, but the company has a lot of work to do.

Indeed, I'd argue that web apps are generally superior to Android apps on Chrome OS. Those looking to edit a photo are likely better off using Fotor or PicMonkey than Photoshop Express for Android. Want to play a game? Try GeForce Now or Stadia instead of the Google Play store.

Android app support feels like a cynical attempt to expand the apps ChromeOS and Windows 11 can claim to support, not a genuine effort to enhance the user experience. Google wins this battle, yesâ€” but laptop shoppers lose.