Microsoft issued a meaty Windows Insider Build on Wednesday for the Dev channel, testing one substantial improvement: Voice Access, as well as a couple of personalization improvements that should be welcomed by Windows users.

Technically, the new features offered in Build 22518 of the Dev Channel for Windows 11 are new, untested code, which might not even make it to the stable channel. Still, there's a good chance that at least Voice Access will come to market, as it leans on Microsoft's accessibility strengths.

Microsoft's new build has also added a Spotlight feature that will provide fresh, updated desktop backgrounds, and it tweaked the Widgets feature to resemble Windows 10.

Microsoft describes Voice Access as a new feature, and one that's distinct from dictation, which has been in Windows for some time. The two are similar, in that Voice Access also uses speech recognition to control your PC. But while dictation is primarily used to create text, Microsoft says that Voice Access can be used for everything from opening and switching between apps, browsing the web, and reading and authoring mail.

According to Microsoft, Voice Access will be controlled by Settings Accessibility Speech within the Windows 11 Settings menu. You'll need to navigate here to turn on the master switch, so to speak, to enable Voice Access. Once it's turned on, you'll obviously need an available mic (either on your laptop or via a headset or earbuds) to control it. 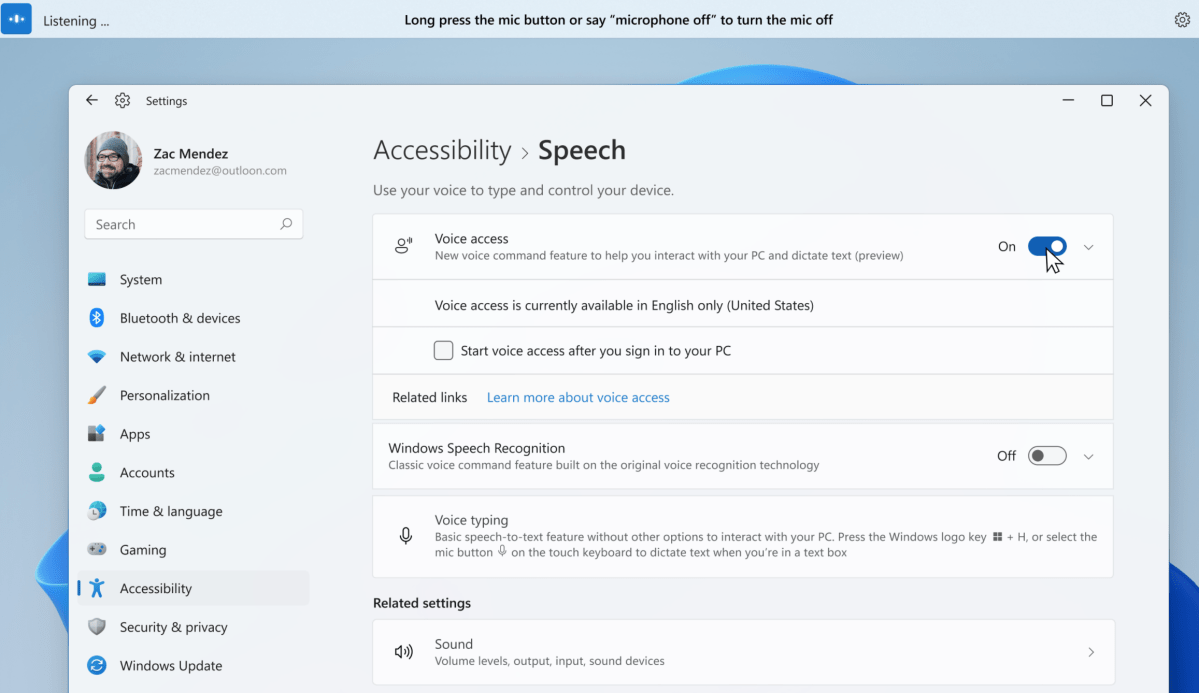 Voice Access will be managed via the Windows 11 Settings menu.Microsoft

Microsoft has a ton of available commands that can be used with Voice Access, most of which are designed to be used by those who need additional accessibility options. But there's also a number that can be used as a modality—Microsoft's way of describing different ways to interact with your PC, including mouse and touchscreens. Suggested commands include Open Edge or Open Word, or search on [search engine] for [search term], as well as ways to navigate around a document and add text to it. 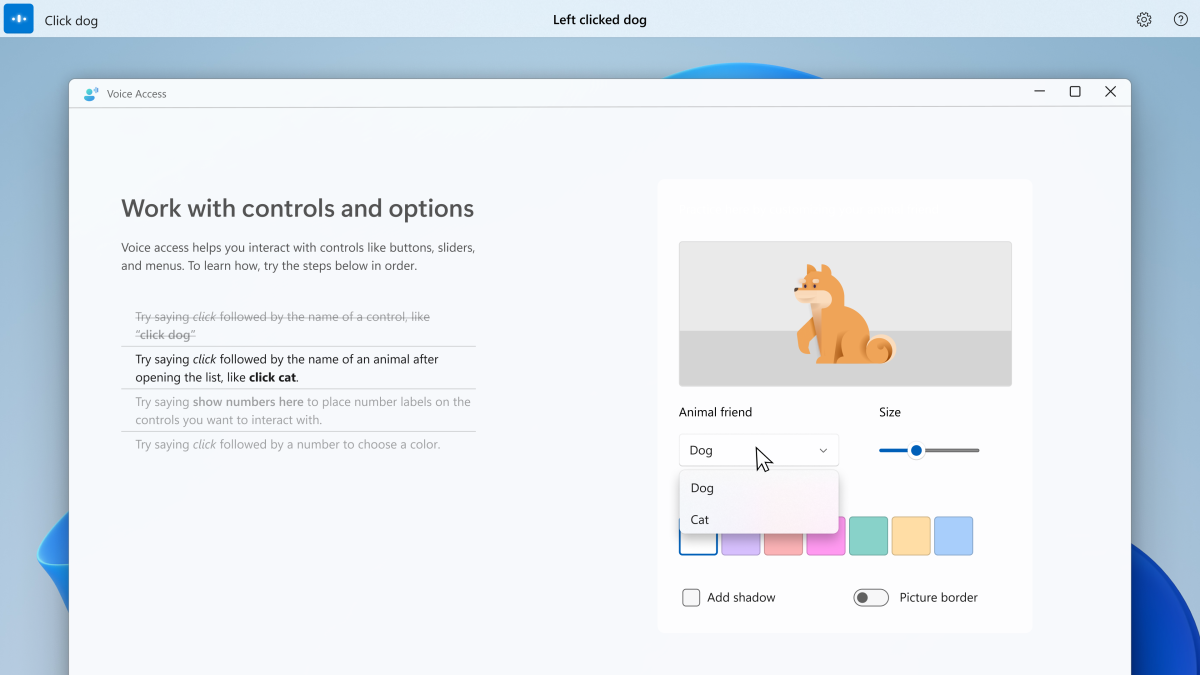 Microsoft plans to add a cute training module to help users get accustomed to Voice Access.Microsoft

All in all, Voice Access is not something you need to use, at all. But it appears to offer new ways of interacting with your PC—f or every user, and not just those who require additional assistance.

One of the more enjoyable things to do within Windows is to personalize your PC, using everything from Themes to custom sounds. For years, Microsoft has offered the ability to download custom theme packs for your PC. You've also been able to take advantage of Bing's image of the day and set it as your daily desktop background via Microsoft's utility. Now, Microsoft appears to be making the latter feature more accessible, via Spotlight.

If you'd like, you can simply right-click on your desktop, and then choose PersonalizeBackgroundSpotlight collection after downloading the new build. You will get beautiful new desktop pictures from around the world every day and fun facts about each picture, Microsoft says.

It looks like Spotlight will be a bit more active, too: Later in the day, the background will be replaced with a collection of up to five new background photos that you can cycle through by clicking on a new Spotlight icon on the desktop. Double-clicking on the icon will open a landing page with more information about the images.

More changes are coming to the Windows 11 taskbar, too—well, no, not the ability to resize the taskbar, anyway. Instead, Microsoft is reverting the Windows 11 Widgets icon to what's essentially the news and interests taskbar widget on Windows 10: a brief summary of the weather outside. Microsoft is also pushing the Widgets widget all the way to the left-hand corner, where the Start menu used to reside. For users who choose to align their taskbar [to the left], the Widgets entry point will be to the right of the Task view icon, Microsoft says—though without the weather and temperature info. 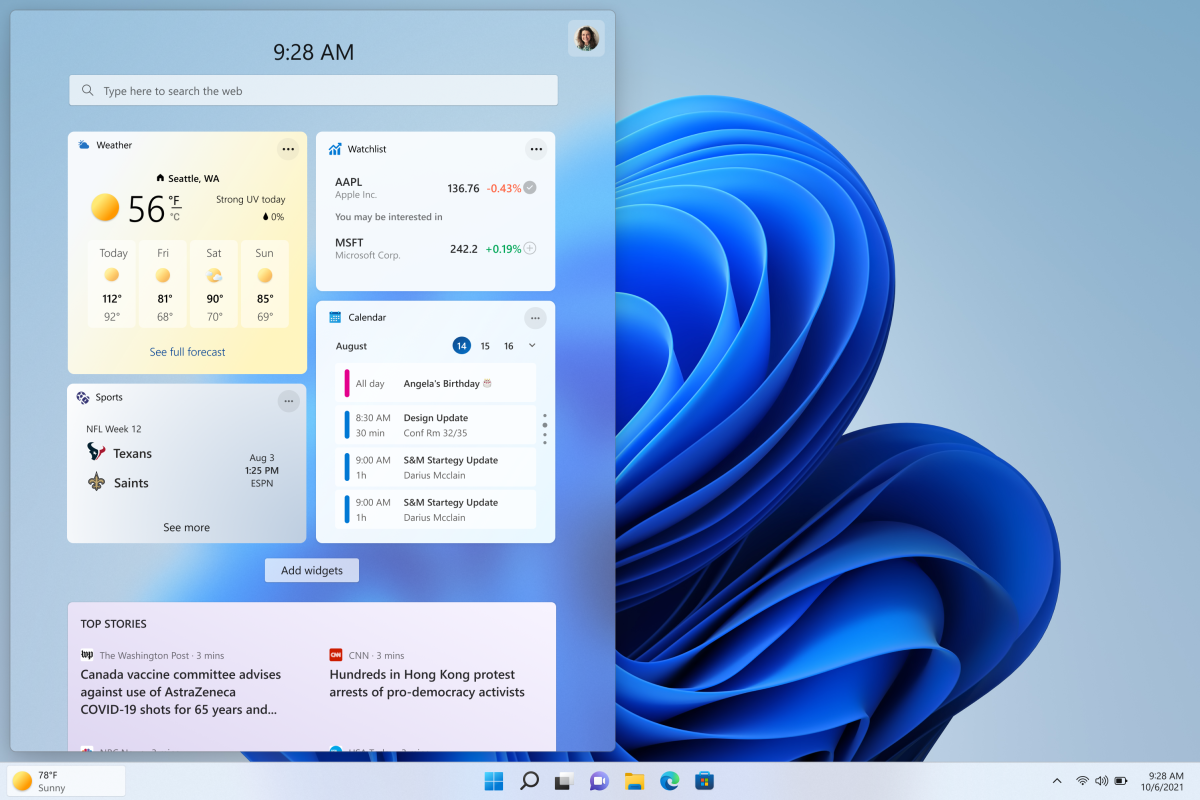 With the new build, the Widgets widget has been moved to the bottom left-hand corner Microsoft

Microsoft is also expanding some of the features it announced earlier. For one, Microsoft is now placing the clock and calendar on all displays for all Dev Channel Insiders, rather than the subset who tested it earlier. Microsoft has also completed the transition to push the Windows Subsystem for Linux (WSL) to the Microsoft Store, and tweaked a few commands and the setup option. (To update to the Store version, you can simply type wsl -update to get started.)

Microsoft has also tweaked the context menu in File Explorer to place commonly used commands front and center, though they're only available to .cer (certificate) and font files in this build.