The release of the 14- and 16-inch MacBook Pro began the countdown of the final days for the Touch Bar, Apple's contextual input controls that sat atop the keyboard. The 13-inch MacBook Pro is now the only MacBook that has it, and it's likely going away, either with a redesign or discontinuation of the model. And while suggestions have been made on how the Touch Bar can find new life, there's one idea we didn't count on: the Touch Bar making its way onto a PC laptop.

At the Consumer Electronics Show on Tuesday, Dell introduced a brand-new laptop, the XPS 13 Plus, and it has a couple of standout design features, one of them being a Touch Bar-like strip of keys. Dell calls it a new capacitive touch experience that allows you to switch between media and function keys easily. Gordon Ung of Macworld's sister site, PCWorld (and someone who loves to mock Apple's marketing language) said, It's not a touch bar, it's a bar you can touch.

(Side note: The deck of Dell's XPS 13 Plus press release says, Introducing XPS 13 Plus and a new UltraSharp monitor that takes collaboration and visual experiences up a notch [emphasis mine]. We don't know for sure if that's a dig at Apple's notch-screened 14- and 16-inch MacBook Pros, but judging by the rest of the laptop it probably is. Very sassy, Dell.)

Admittedly, Dell's non-touch Touch Bar looks elegant, making good use of the space between the screen and the keyboard. But like Apple's method, which also looks great in pictures, Dell's strip ignores why Mac users hated Apple's Touch Bar in the first place: it lacks a tactile quality. Pros use function keys all the time, and they want to be able to touch one of those keys without having to stop, look down, and search for it, which breaks up a workflow. That may sound trivial, but if you're working on a project and you're using the functions keys dozens of times in a session, it can wear on you over time.

If you want to get to the volume, brightness, and other controls, you have to hold down Fn and Esc, which sounds like a nightmare. And it's not customizable in any way. Dell says the keys were removed to make the laptop thinner while still fitting it with a 28W CPU, which is definitely a reason. Ars Technica spent some time with it and called it one of the more unusual XPS features to come in a while. We're not sure that's a compliment. 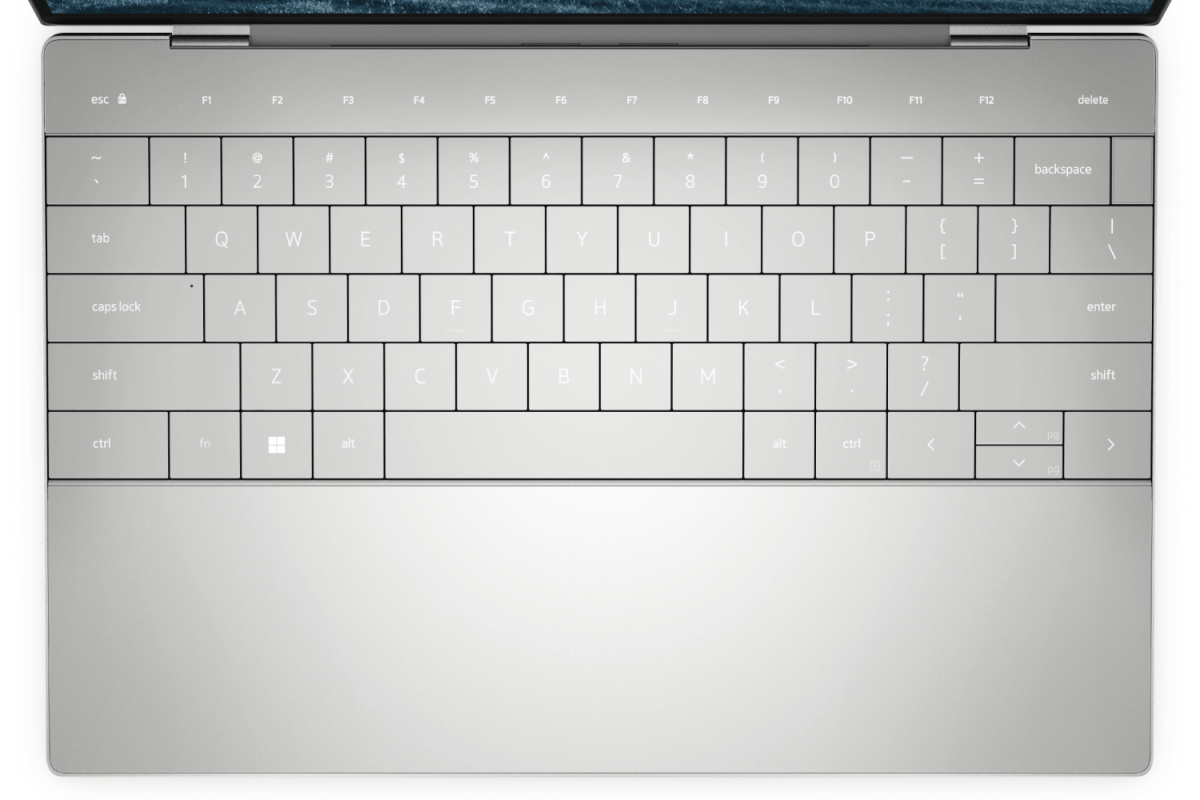 The Dell XPS 13 Plus houses an invisible trackpad below the keyboard.

The other standout design feature of Dell's XPS 13 Plus is its glass trackpad. As you can see in the photo above, there isn't a visible trackpad in the area below the keyboard. That's because the whole entire thing is a haptic trackpad like the one Apple uses, but Dell decided to hide the trackpad to fit the design philosophy for the laptop. Our PCWorld compadres haven't used the XPS 13 Plus's trackpad to see how it feels and if having no physical border poses a useability issue, but the idea of the whole bottom area being used as a trackpad does sound (and look) cool.

Oh, and one last thing about the XPS 14 Plus: it doesn't have a headphone jack, something Apple laptops not only have, but was actually improved upon in the 14- and 16-inch MacBook Pro with support for high-impedance headphones. XPS 14 Plus users will have to rely on USB and Bluetooth for their audio needs. To quote Gordon again, it's the most courageous move in a laptop full of them.