Samsung broke the ground, Lenovo brought it to the laptop form factor. So Asus can't claim to be first in making a laptop that's essentially one giant, folding OLED panel. But it can stand out in another way: making it absolutely massive. The company announced its Zenbook 17 Fold at CES 2022, offering a folding Windows computer that's either a massive tablet or conventional with a screen for a keyboard — take your pick.

The Zenbook 17 Fold uses one enormous 17.3-inch OLED for its sole onboard display and input. Unfolded and flat, it's a 2560×1920 4:3 screen, evoking a massive iPad. When folded in laptop style, each screen is 12.5 inches and 1920×1280, making it feel more like a conventional ultraportable (albeit one without a keyboard). Naturally the tablet works however you hold it, with middle-hinge book mode being encouraged. 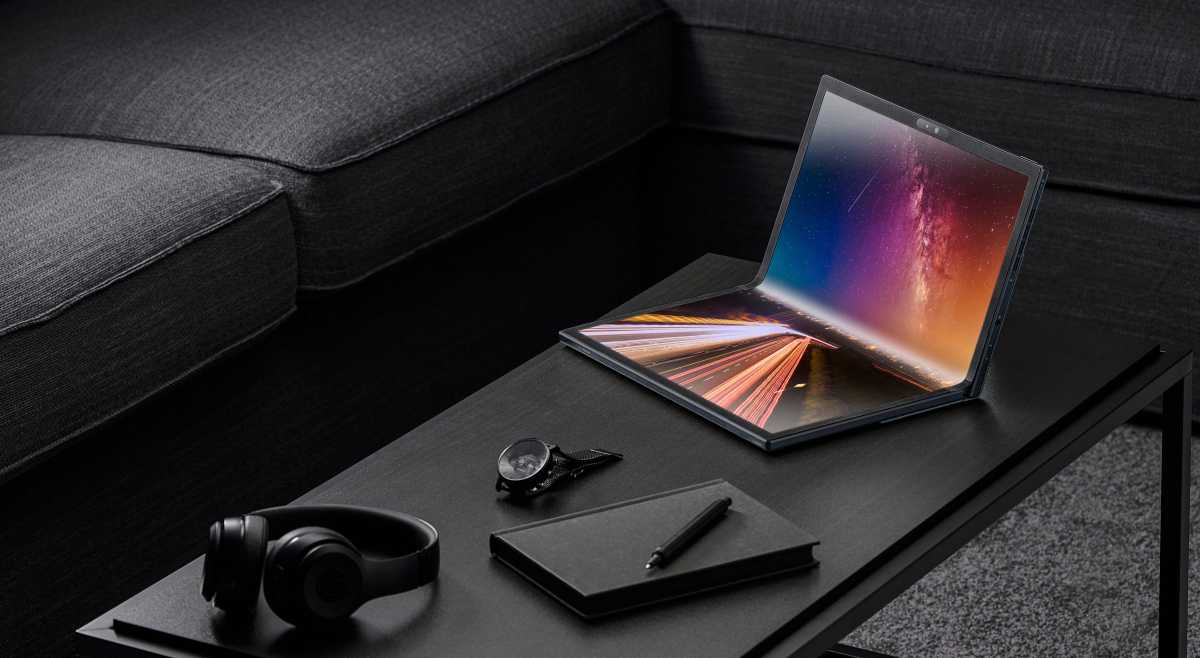 Like the ThinkPad X1 Fold, it comes with a thin wireless keyboard and trackpad that sits over the bottom half of the screen for a more conventional laptop layout. Or you can hold it in the same way, simply using the bottom half of the screen as a keyboard when needed, smartphone-style. An integrated kickstand in the magnesium alloy body allows the user to prop the fully-unfolded, 17-inch display on a table, then use the keyboard and trackpad separately via Bluetooth.

Inside the Zenbook 17 Fold is a surprisingly standard set of configurable specs, up to a 12th-gen Core i7 U processor, 16GB of RAM, an impressive 75 watt-hour battery (more than many smaller laptops), and Wi-Fi 6E. That huge frame holds two USB-C/Thunderbolt 4 ports, a headphone/microphone jack, and dedicated tablet-style volume buttons. Along one bezel is a QHD webcam, IR camera for Windows Hello, and a mobile-style light sensor for automatically adjusting the screen's brightness.

Asus says that the hinge of the Zenbook 17 Fold can handle at least 30,000 fold cycles, though the promotional material is mum on the durability of the screen itself. If it's using a layered polymer cover instead of glass, as the Galaxy Z Fold and ThinkPad X1 Fold do, it may be somewhat less than tough. Though the Zenbook 17 Fold is a retail product scheduled for release in the mid-year of 2022, Asus isn't saying how much it will cost. 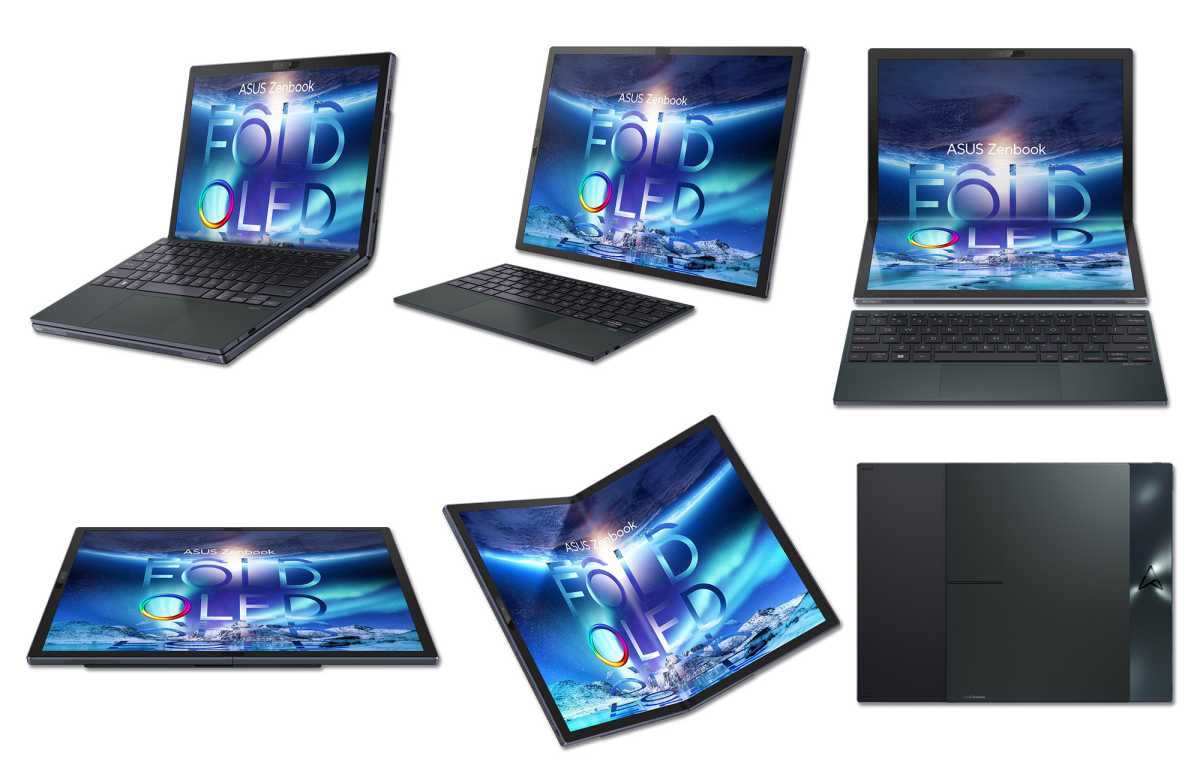 For those looking for a more conventional laptop, the Zenbook 14 OLED might be more appealing. Offered in a variety of both exterior colors and internal configurations, this slick-looking refresh of the Zenbook line turns some heads with its Star Trek-style embossed logo on the metal lid. The laptop is offered in aqua celadon (blue-silver) and ponder blue (dark navy) for Intel 12th-gen versions and a jade black color (all black, no jade) for the AMD Ryzen 5000 version. 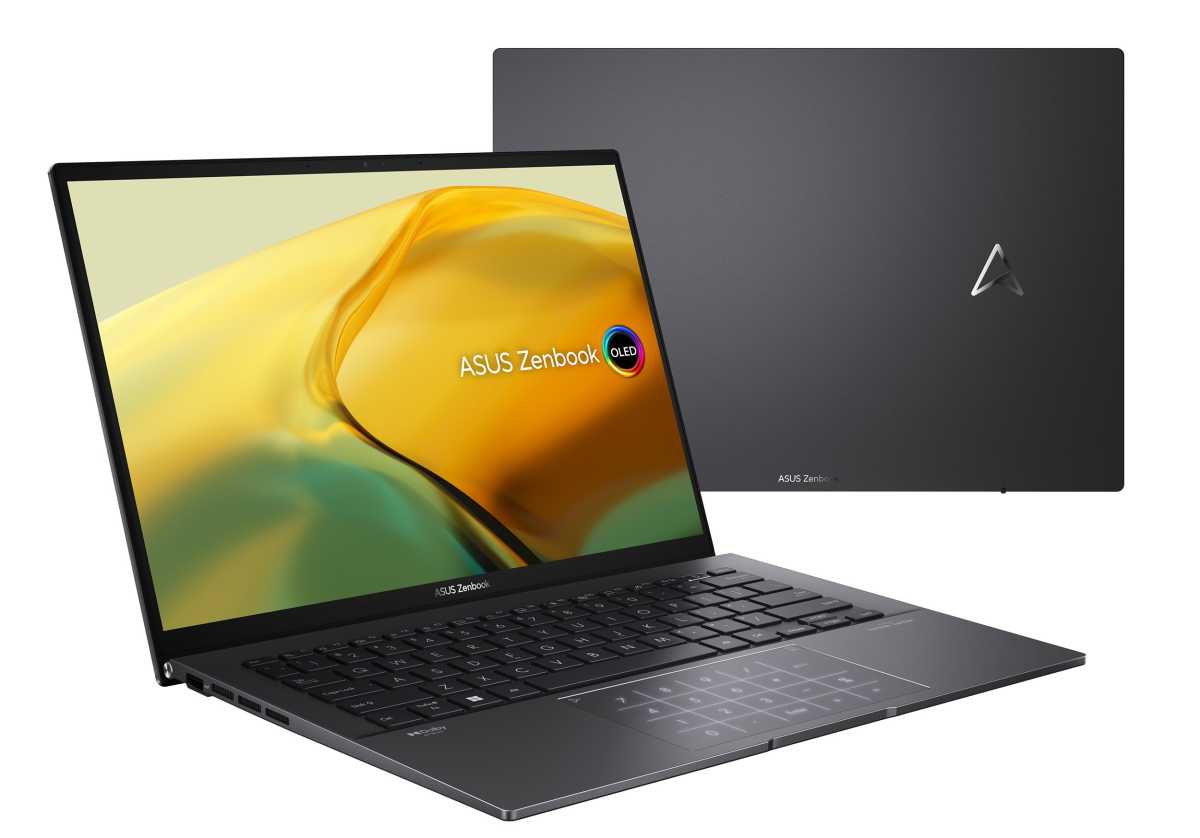 A few notable design choices make it stick out from the pack. The combined touchpad and 10-key area seen on other Asus laptops makes a return, along with a 180-degree hinge that's not often seen on today's laptop designs. The 14-inch 2880×1800 OLED is nice enough to get a mention in the title, but this laptop is no primping princess. It has a generous selection of ports: Two USB-C/Thunderbolt 4, one USB-A, a full-sized HDMI port, and even a MicroSD card slot. It's also packing a generous 75 watt-hour battery. The keyboard includes a fingerprint reader. 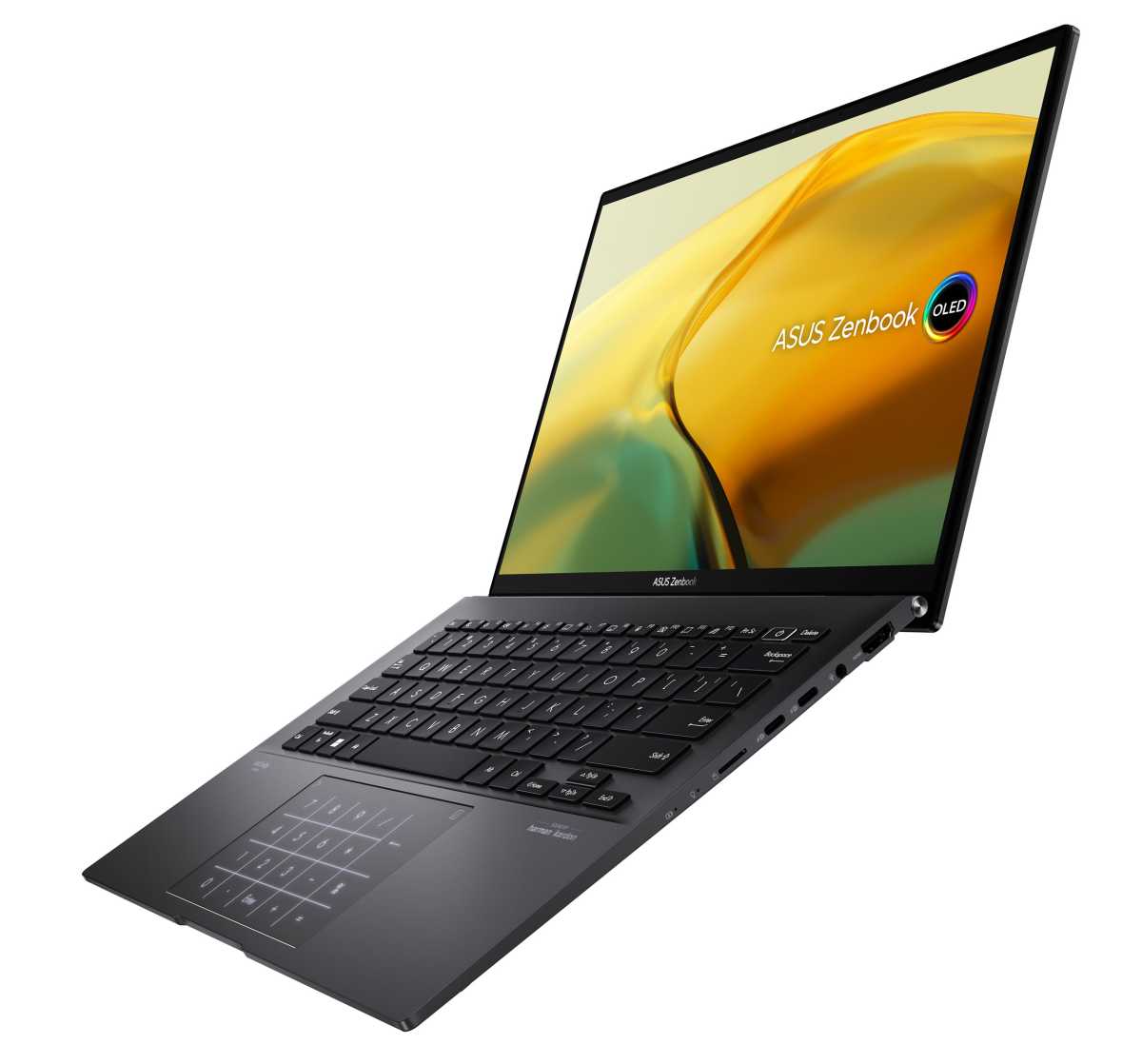 You can choose your Zenbook 14 OLED with either Intel or AMD processors, up to a Core i7 or Ryzen 7, respectively. Both get the same choices of RAM and storage (16GB and 1TB at max), but only the Intel 12th-gen version can use faster DDR5 memory and a PCIe 4.0 SSD. So expect the Intel version to be considerably more expensive when it releases.

Not flashy enough for you? Asus is celebrating that one time it sent a laptop into space on the MIR with a commemorative Zenbook 14X Space Edition. It's largely similar to the Zenbook 14, but includes a tiny 3.5-inch black-and-white ZenVision OLED screen on the outer lid, along with some custom engraved graphics. This screen can display the time, a personalized badge for ID, or just some fun graphics or text. The display is customizable via software. 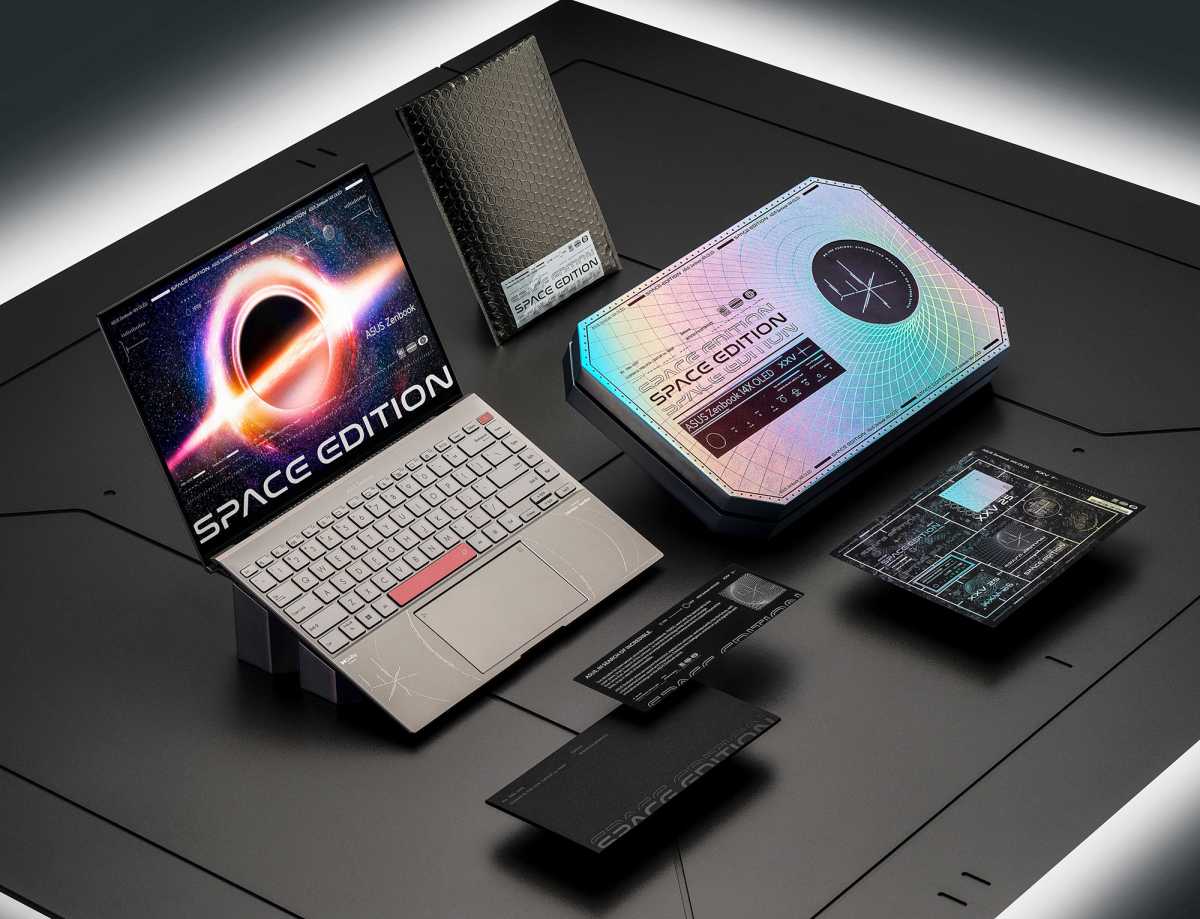 The Zenbook 14X Space Edition offers the same ports as the less bombasting Zenbook 14, albeit rearranged and with a more conventional hinge design. The box it comes in doubles as a nifty laptop stand, though the 23-degree angle might not be everyone's cup of tea. The upgraded laptop also gets a unique dual-fan cooling system and a 45-watt power mode for its more powerful Core i9 processor, though its battery is notably smaller at 63 watt-hours.