Sure, sheer power makes a big difference in your PC's performance, but efficient cooling plays a huge part too. Yes, better cooling is the answer to better desktop gaming, and HP's unique new take on traditional closed-loop cooling caught our eye at CES 2022.

HP's clever idea might not wow you like CyberPower PC's wild breathing PC case, but this truly ingenious design could prove much more practical. HP has already patented what its calls a Cryro Chamber, a case rejiggering that effectively increases CPU cooling by moving the liquid cooler out of the PC's hot interior.

For the uninitiated, most gaming PCs today use all-in-one closed-loop coolers that are essentially scaled-down car radiators. They remove heat from the CPU and exhaust the waste heat out of the PC, passing it through a radiator. The problem is the general design of cases themselves: You have a rectangular box where the radiator is typically mounted in the back, top, or front of the system.

You can see an example of this in HP's smaller Omen 25L desktop, which uses the conventional setup found in the vast majority of PCs. The Omen 25L seems to have been thermally engineered to reduce heated air moving through the top-mounted radiator, but it's always going to be somewhat warmer than cool air coming in from the outside. 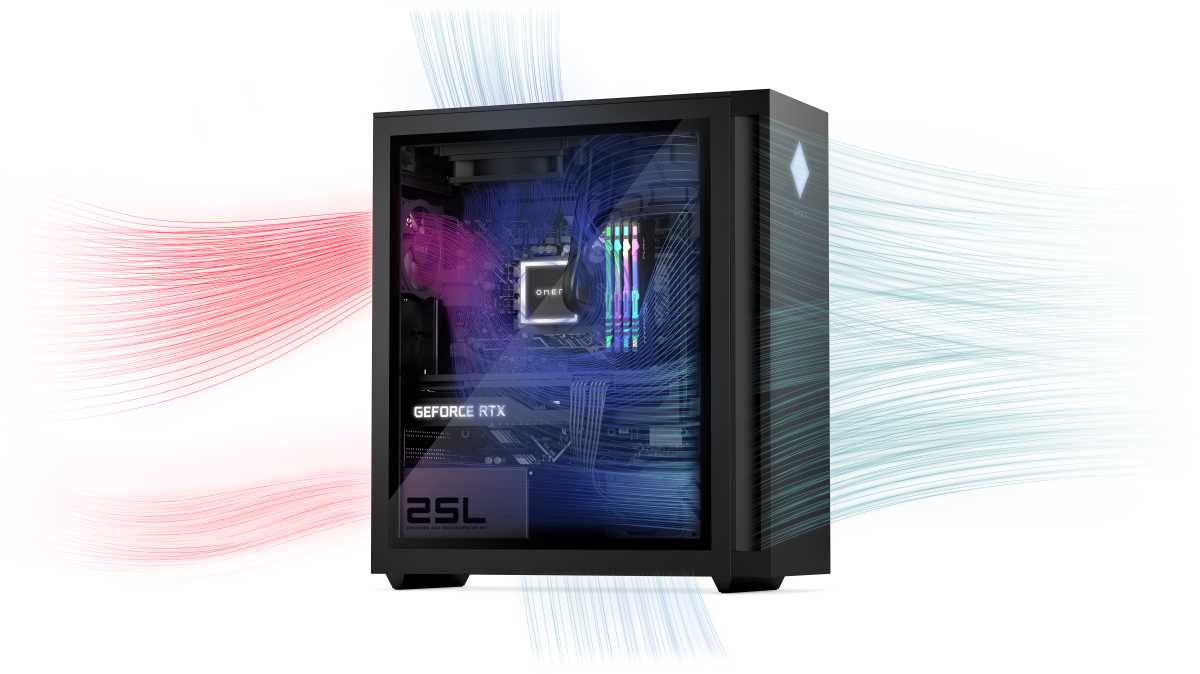 In a conventional liquid-cooled PC such as this smaller Omen 25L, air flows from the front of the PC through the interior so air that is heated up from from the GPU and other parts feeds the radiator with warmer air.

With the new Cryo Chamber, used in the larger Omen 45L desktop announced at CES, HP solves the problem of feeding the radiator hot air by moving it up and out of the PC case itself. External liquid-cooling isn't new. The early days of custom liquid cooling relied on radiators sitting outside of the case, with an inlet and outlet leading to it (yes, those are what those two holes in your old case are for.) Obviously, that's a pain in the butt, so internally mounted radiators have all but eliminated external radiator systems today, at the cost of eating internal hot air.

Until now, that is, with the Cryo Chamber shown below in the Omen 45L. You can see the closed-loop cooler's water block and hoses feed into the Cryo Chamber mounted above it. This method means fans mounted in the front suck in outside air that is then exhausted out the rear, cooling the radiator. The gap isn't vented inside, so there's no cross pollution with the hot air generated in the main PC chamber. 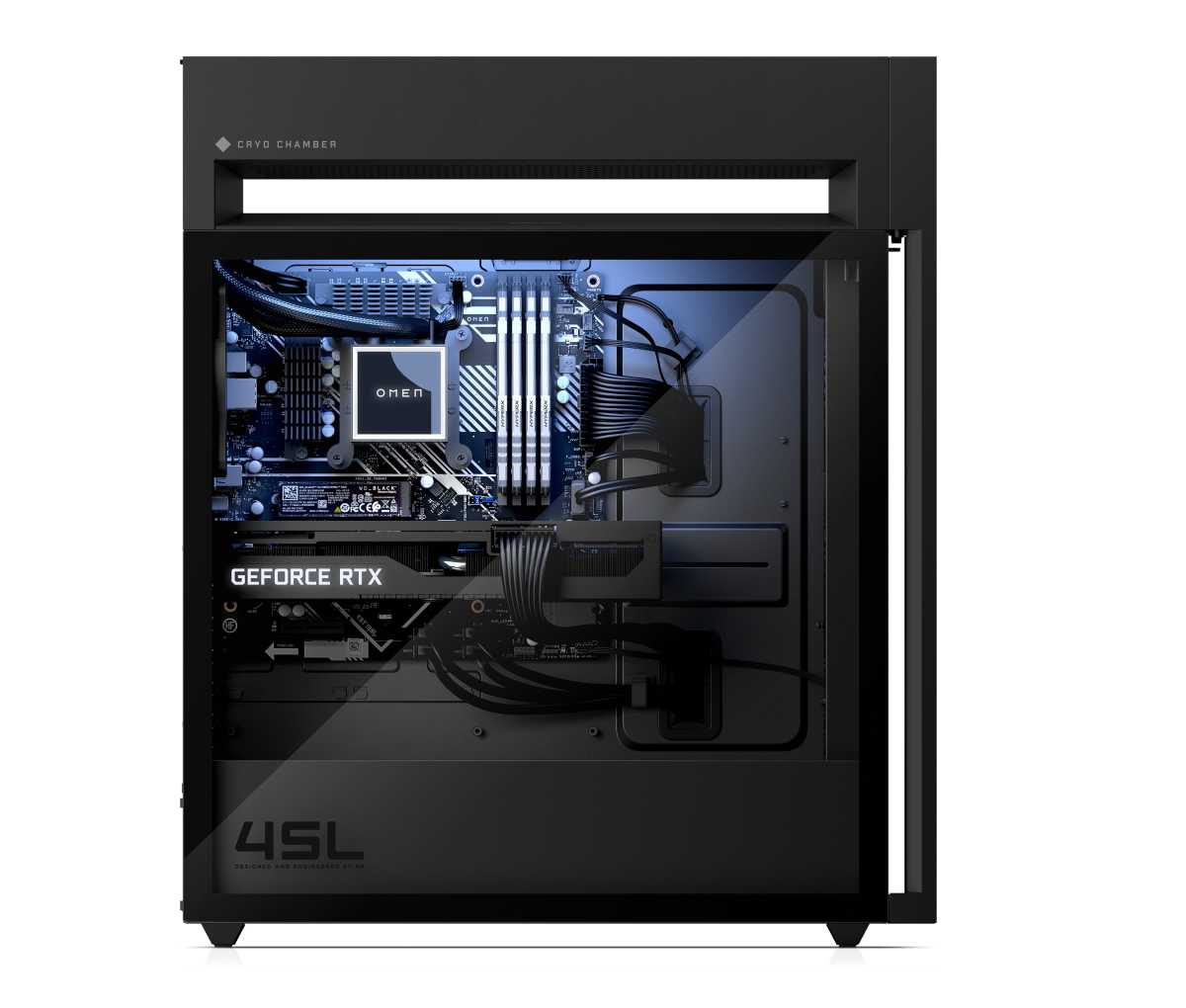 The Omen 45L's patented Cryo Chamber separates the liquid cooler's radiator from the rest of the hot PC's insides. It's like a McDonald's McDLT for PCs (look it up.)

You may be a little confused by the image above, but here's part of the HP presentation showing off the Cryo Chamber. Unlike conventional PCs, you can see cool air is sucked in the front and exhausted out the back. Meanwhile thermal energy is moved through the liquid in the hoses to the radiator which is fed the coolest, unadulterated air through a channel that cuts through the middle of the case. Negative Nates may say the air temps don't make that much of a difference, but HP said its tests show the Omen 45L's Cryo Chamber offers a 6 degree Celsius reduction in temperatures at full load with a room temp at 25 degrees Celsius (or about 77 degrees in freedom units.) HP's tests were, however, conducted against a Cooler Master 120mm CLC which was likely mounted inside of the case, much like the smaller Omen 25L above. With a larger 240mm cooler mounted in front, the difference might be a little closer. 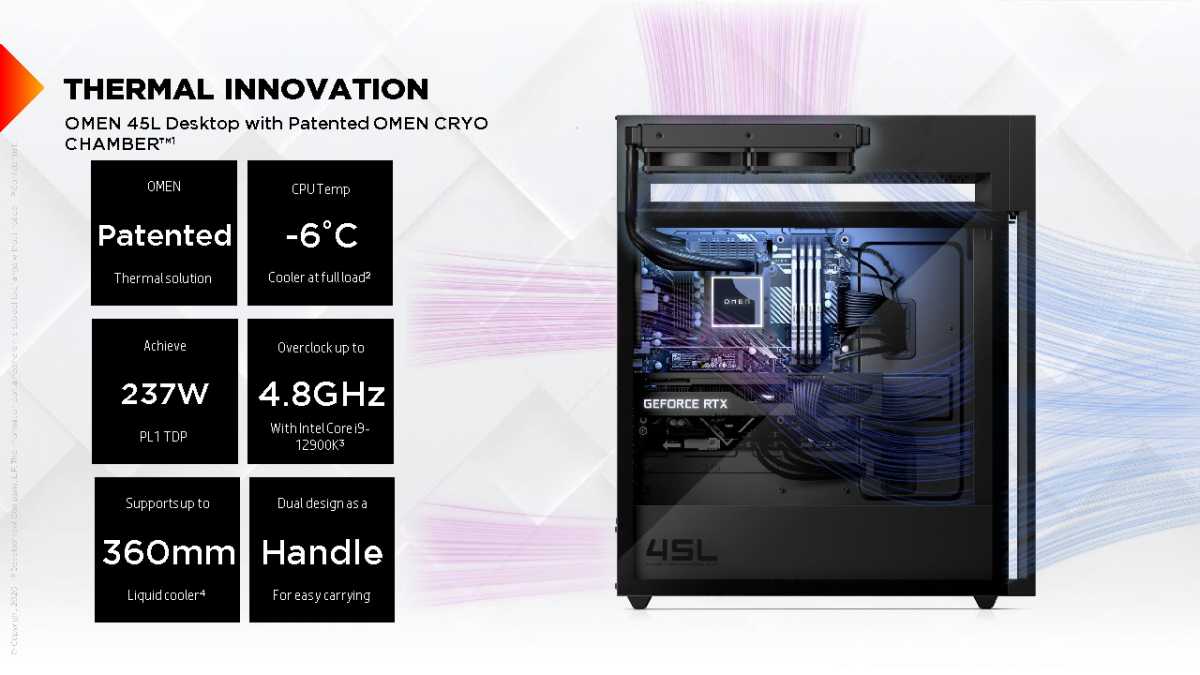 Cool air flows in the front and is exhausted out the rear while the radiator is sealed off from rest of the PC and only sucks in cool outside air on the Omen 45L's Cryo Chamber.

HP doesn't just wall off the cooler though. The Omen 45L also seals off the power supply which is another source of heat in a PC. All told, HP's Cryo Chamber design should still improve the cooling performance over conventional designs.

If you're thinking HP's cooling design locks you in to its cooler, HP has already thought about that and said the case is built with future proofing in mind. You can, in fact, open up the Cryo Chamber to put in up to a 360mm radiator inside. The Omen 45L can also accommodate a power supply up to 200mm in length and full ATX motherboards (244mm x 305mm).

And you can do it while keeping the FCC happy, as the tempered glass window is shielded for RF emissions something your typical DIY case doesn't have to deal with.

Overall, it's good idea, especially when you think of how warm your PC's internals get on a summer day. At the 77 degrees HP tested it at (a reasonable Summer day in a home without air conditioning), the internal temps could be far hotter. Giving the radiator its own cooling chamber frankly, can only improve the cooling of any gaming PC. 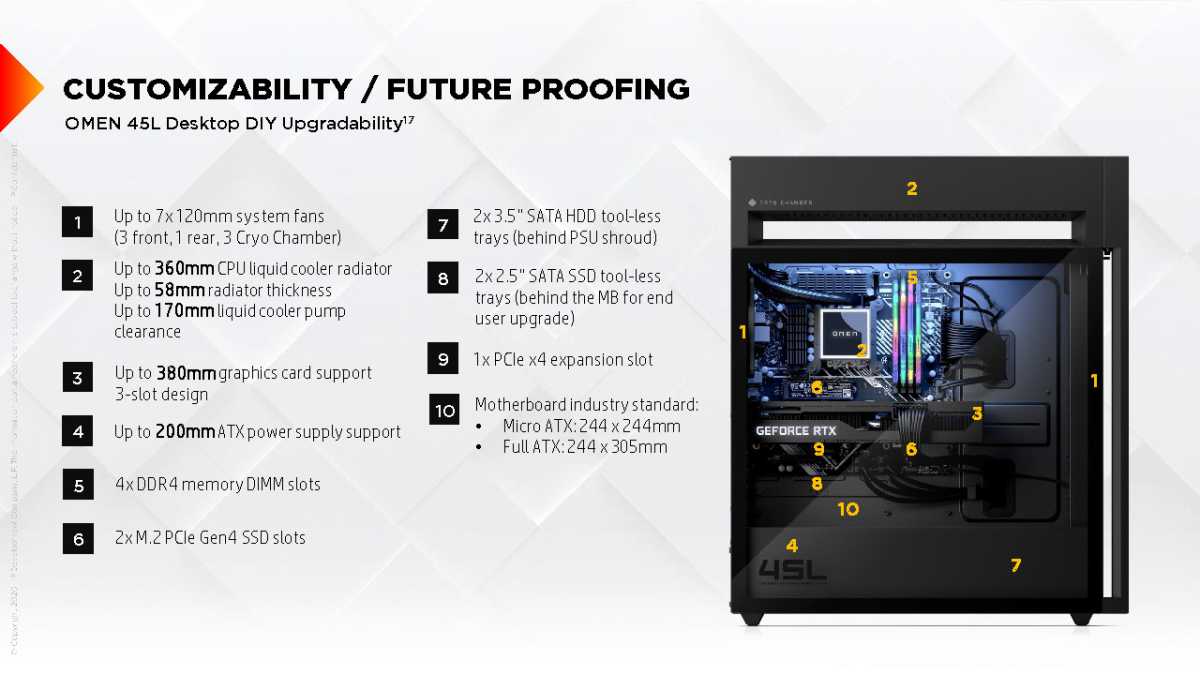 The HP Omen45L is built with upgrades in mind including the ability to swap in your own larger liquid cooler.