Diehard Note users may think otherwise, but Samsung made a good call in replacing the Galaxy Note with the Galaxy S22 Ultra, which is launching today along with the S22+ and S22 smartphones. Ten years is more than enough time to concede the inclusion of a stylus doesn't necessitate a separate phone brand—and it's also now debatable whether a stylus makes a modern phone any more useful.

But let's consider what's changed since the Note launched in 2011. When the first Note hit the market, users were still used to jotting down notes in journals and legal pads. These folks adopted the Note as an extension of their habits. But what we all now realize, explicitly or subconsciously, is that we've evolved beyond inking notes with a pen—electronically or otherwise—and have adopted other methods of archiving data. We're adept at typing with our thumbs in cloud documents and email. We record our Zoom calls. We use voice recording and voice dictation. We all have our own methods of taking notes and keeping track of to-dos, and the wide variety of options has made inked notes less relevant than ever before. 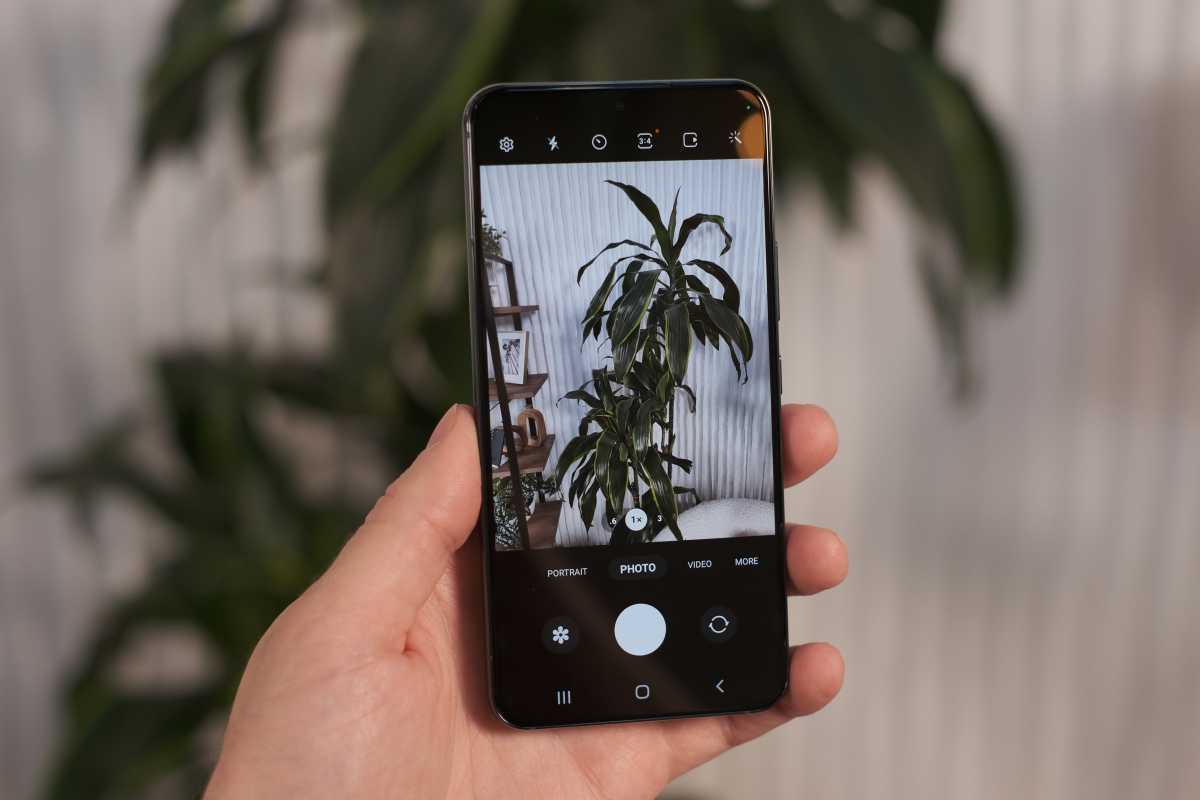 Samsung's Galaxy S22 phones are known for their outstanding cameras, which have been revamped on the lower-end models. Image: Adam Patrick Murray / IDG

That's not to say Samsung's new Galaxy S22 Ultra doesn't benefit from its integrated S Pen, which now fits within an integrated holster, just like in previous Notes. It's a fine accessory, though I believe the S22 Ultra's S Pen will be used more as a controller than a note-taking or drawing tool by most people. Beyond that, the S Pen gives Samsung an excuse to release a slightly taller S22 Ultra, with a slightly larger battery inside. The new Galaxy S22 and S22+ lack the integrated S Pen, and they're slightly thinner and smaller than the Galaxy S21 and S21+ as a result.

By now, Note diehards should be chasing me with pitchforks. To them, I say use your S Pens on the new Galaxy Tab S8 tablet, also released today. Its inking experience is superb.

Samsung is releasing three new phones within the Galaxy S22 lineup: the 6.8-inch S22 Galaxy Ultra, the 6.6-inch Galaxy S22+, and the 6.1-inch Galaxy S22. Memory options on the Ultra range from 8GB to 12GB, and storage from 128GB to 1 TB, with Australian pricing as follows:

As a bonus offer before February 22, Vodafone is offering customers who pre-order the Samsung Galaxy S22 Ultra the opportunity to redeem $600 trade-in credit when they trade-in an eligible phone and stay connected for the full length of their plan's contract. They can also select a bonus gift from a range of gifts up to the value of AU$337.

Telstra's most affordable plan for the starter 128GB Galaxy S22 Ultra is its $55 Small Upfront Mobile Plan. This plan costs AU$132.04 per month over 24 months (total minimum cost AU$1,903.96). It also includes 40GB data per month. As a bonus promotional offer, Telstra is offering customers who pre-order a Samsung Galaxy S22 Ultra before March 3 a bonus Samsung Galaxy Tab A8 as well as a Samsung Gift Pack. Customers will also be eligible to redeem a 12-month subscription to Disney+. See these plans and offers below:

On the S8 and S8+ tablets, the choices are much simpler: 8GB of memory, with 128GB or 256GB of storage. Samsung also told us the Galaxy S22 series includes Qualcomm's 4nm Snapdragon 8 Gen 1 processor inside.

The phones come in a variety of colors, from Phantom Black, Phantom White, Green, and Burgundy, plus Pink Gold for the S22+ and S22 models. 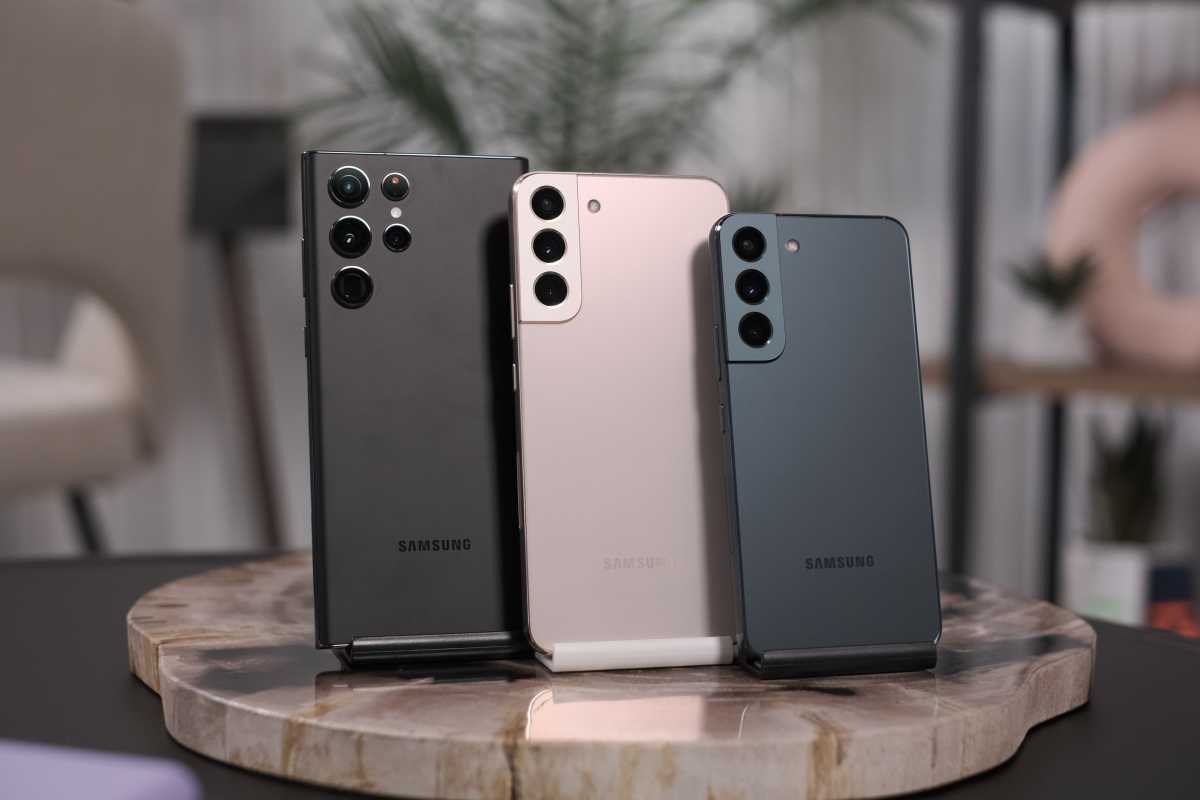 The S22 Ultra's quad camera specifications haven't changed as far as the number of lenses and their resolution. Its space zoom is still 100X (10X optical, 10X digital zoom). Samsung deserves credit for slightly shrinking the S22 Ultra from 165 mm to 163.5mm, while only widening the phone from 75.6mm to 77.9mm. The other notable improvement is in the battery capacity, as it's increased from 4855mAh to 5,000mAh. The S22 Ultra and S22+ now has integrated WiFi 6E, up from WiFi 6 (802.11ax) in the S21 generation.

Specs notwithstanding, the camera's AI has improved, as it can now track and focus on 10 different people, and even recognize the penumbra of pet hair for accurate portrait mode. Samsung says it uses depth maps to focus on even a single strand of hair. It also reportedly adjusts the zoom angle, though we'd have to test that to see the full impact.

The S22 boasts improved optical image stabilization (OIS), which Samsung calls Super Steady. And in low light, Samsung's Adaptive Pixel technology will combine nine pixels into one shot with the phone's multiple cameras, compositing them into a single pixel with an improved image. (The pixel sensor remains 2.4um, the same as in the S21 Ultra.) The Ultra cameras ship with Samsung's Expert RAW app, offering controls like ISO, shutter speed, histogram control and more.

The idea is that you'll be able to capture a 108-megapixel detail image plus a separate image optimized for lighting, then combine the two. Samsung says that these new cameras process four times more data than the previous generation thanks to the camera using uncompressed data internally. Night portrait mode is available on both the front and rear camera. 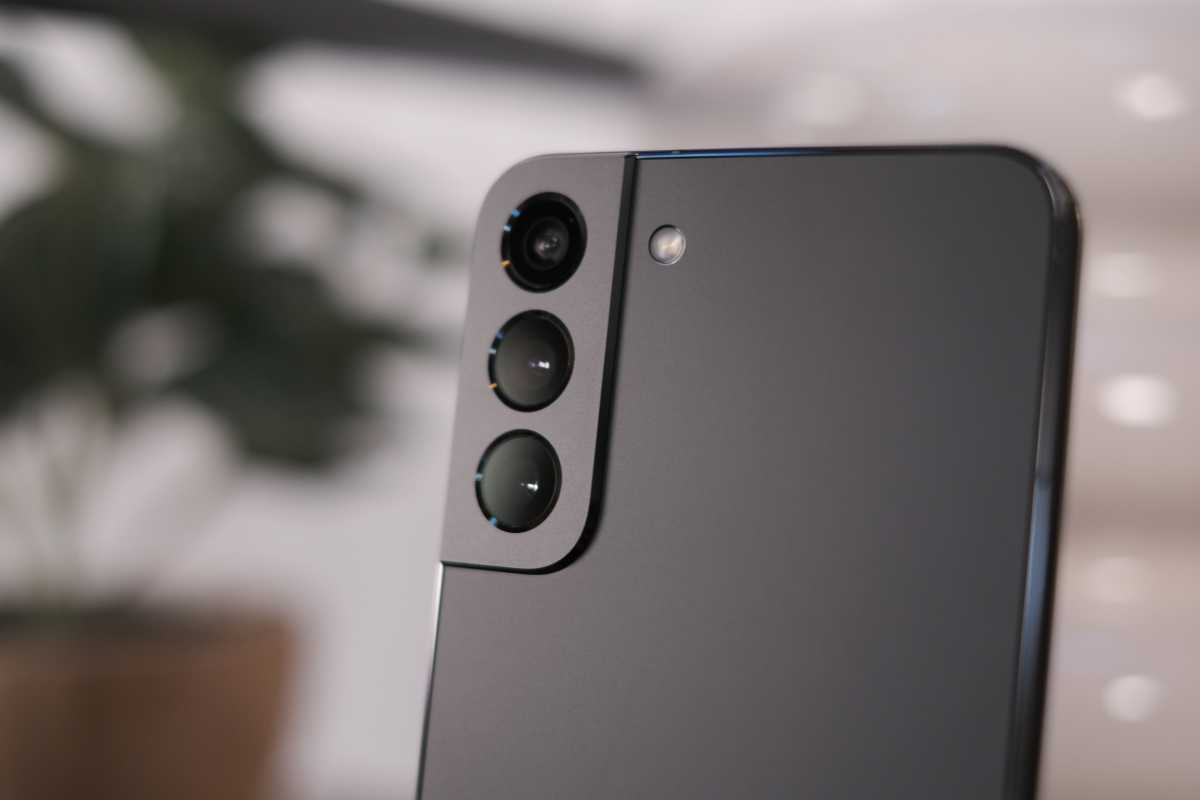 The S22 and S22+ physically offer only slight differences from the S21 generation: At 6.1-inches and 6.7-inches, both the S22 and S22+ are just 0.1 inches smaller. The S22+ is both slightly shorter and thinner as well, while the s22 is shorter, thinner, and narrower than the S21. Battery life has slightly decreased as a result. The display density remains unchanged, Samsung said. In terms of screen brightness, the S8 offers 1,300 nits, while the S8+ can put out 1,750 nits of brightness. (The S22 Ultra does as well.) 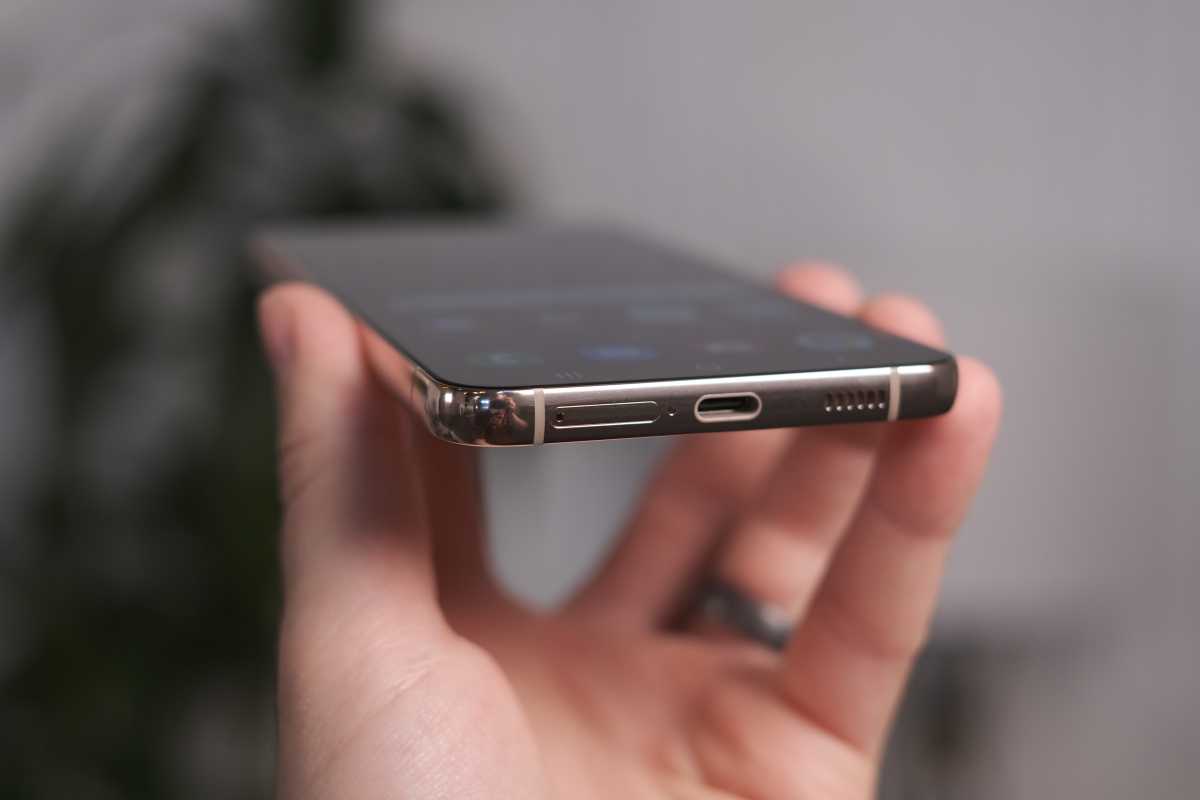 No, Samsung hasn't brought back the headphone jack. The S22+ and S22 Ultra use 45W charging and 25W wireless charging, which can charge up to 50 percent in 20 minutes. Image: Adam Patrick Murray / IDG

Samsung's new phones include a new Digital Wallet app, which will store digital IDs, payment, and even digital keys for cars, home and office. They're stored within the Knox digital lockbox.

If you'd like to dive deeply into the full list of specifications, they're listed below. You can open the image in a new tab to zoom in. 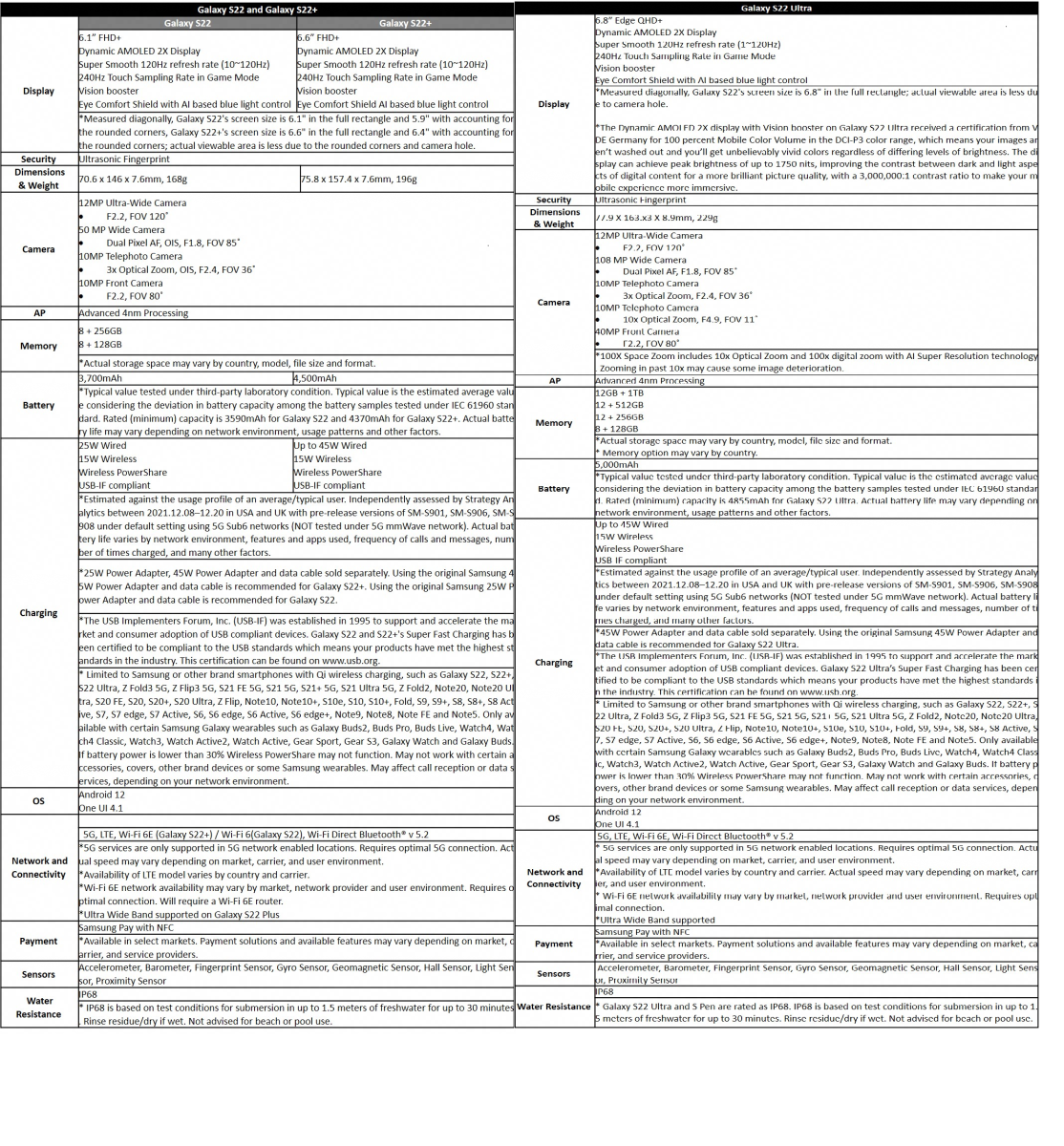 During a product briefing, I spent less than 60 minutes with the S22 line-up, and didn't notice any obvious weak points. Note, though, how the S22's form factor doesn't allow you to scroll more than a few notes within the space allowed by the screen. Instead, it feels far more useful to use the S Pen as a way of navigating to utilities, or other controls. 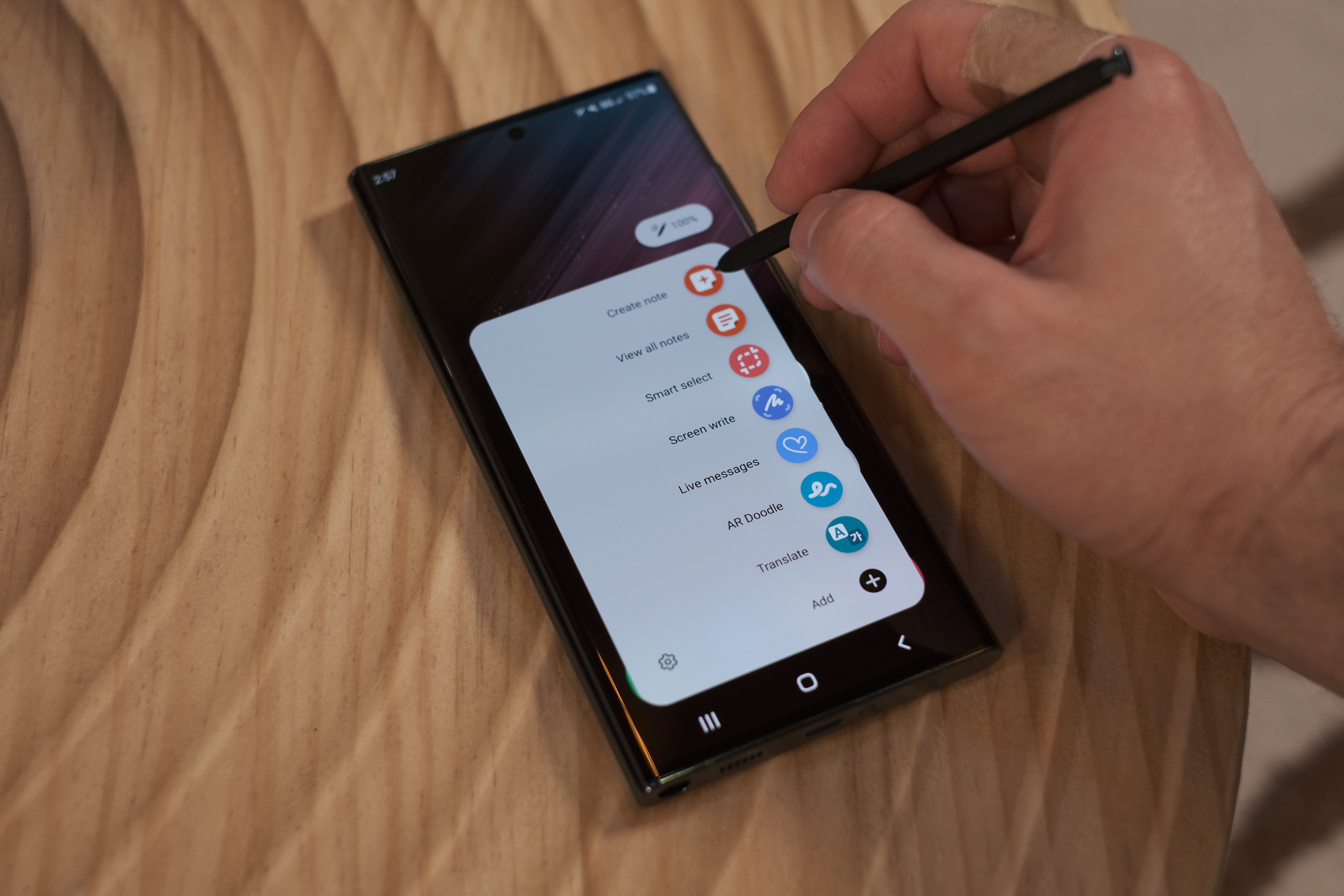 The S Pen on the Galaxy S22 Ultra can be used for both inking notes as well as for control functions.

We'll have to test how the improved camera AI features play out in real life: Can we actually track 10 people during the waning (?) days of a pandemic? Will the processor prove to be faster and more responsive over daily use? And how long will the battery hold up? Samsung has promised performance leaps for its cameras, though they sound vaguely similar to the previous generation. All of these are questions the new S22 phones will have to answer during the course of a review. Stay tuned for coverage on PCWorld or sister site, Tech Advisor.