NFTs, an allegedly artistic offshoot of the cryptocurrency market, are a hot topic. They're also a controversial one, and thanks to an intrinsic connection with technology, one that was bound to intersect with gaming at some point.

We aren't going to cover the full width and breadth of non-fungible tokens in this article. Suffice it to say, they're digital receipts for artwork which, importantly, are not actually the ownership or copyright of the art itself, and which can be transferred via the same kind of cryptographic verification as Bitcoin. If you need a crash course on the concept, try this quick video from the Wall Street Journal… or perhaps this more tongue-in-cheek one from Cracked and the inevitable follow-up.

If you're a fan of NFTs, they're a revolution in monetizing art. If you're not, they're a get-rich-quick scheme trying to make cryptocurrency lightning strike twice, suffering from the same glut of hucksters and thieves that so frequent the crypto markets. NFTs are controversial for a number of reasons: their impact on the environment due to requiring processing power for verification, the tendency of NFT sellers to pump out mass-produced art to serve a questionable market (or just steal some and sell it anyway), and the very concept of selling a digital certificate as a commodity and a nebulous type of ownership.

A new kind of microtransaction

What do NFTs have to do with gaming? On the surface, not a lot. Introduced as a means of transferring ownership of specific pieces of art, non-fungible tokens aren't really compatible with mass media like games, movies, or TV shows. But that hasn't stopped some developers, both large and small, from trying to get in on the craze — and make a quick buck while there's an opportunity to do so.

The core idea of implementing NFTs in games seems to be mostly connected to in-game items, typically a skin or item of clothing for the player's avatar. These at least have something in common with the individual pieces of art mostly pushed alongside more conventional NFTs — Valve was selling community-made items in Team Fortress 2 a decade ago. As with other NFTs, these items can be sold and re-sold on the blockchain. But unlike other blockchain technologies, the fact that said items actually rely on the game itself to both function and hold value means that it lacks the decentralized nature that appeals to so many anarcho-capitalists. 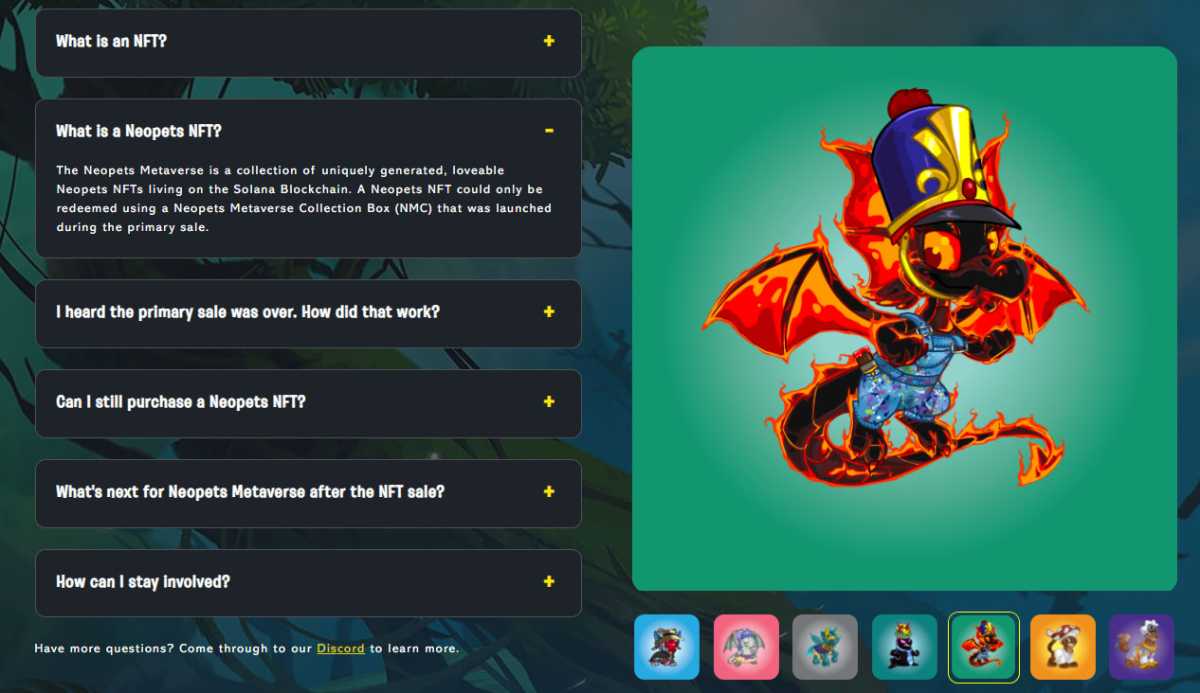 Sega was one of the first well-known publishers to express interest in selling NFTs, registering a trademark for that purpose despite intense fan backlash. In the feverish scramble of 2021, Square Enix, Konami, Fable creator Peter Molyneux, whoever owns the name Intellivision these days, and even the makers of NeoPets got in on the action.

Ubisoft is an NFT cheerleader

But by far the biggest cheerleader for NFTs among major gaming companies was, and remains, French publisher Ubisoft. The company became the first major gaming figure to push NFTs into its own game with limited in-game items for Tom Clancy's Ghost Recon Breakpoint. Despite intense backlash from both gamers and its own employees, Ubisoft seems committed to featuring NFTs in existing and new games as of the time of writing. Replying to the backlash, Ubisoft made non-committal statements of understanding but refused to back down. Ubisoft recently licensed its Rabbids characters for metaverse market The Sandbox. 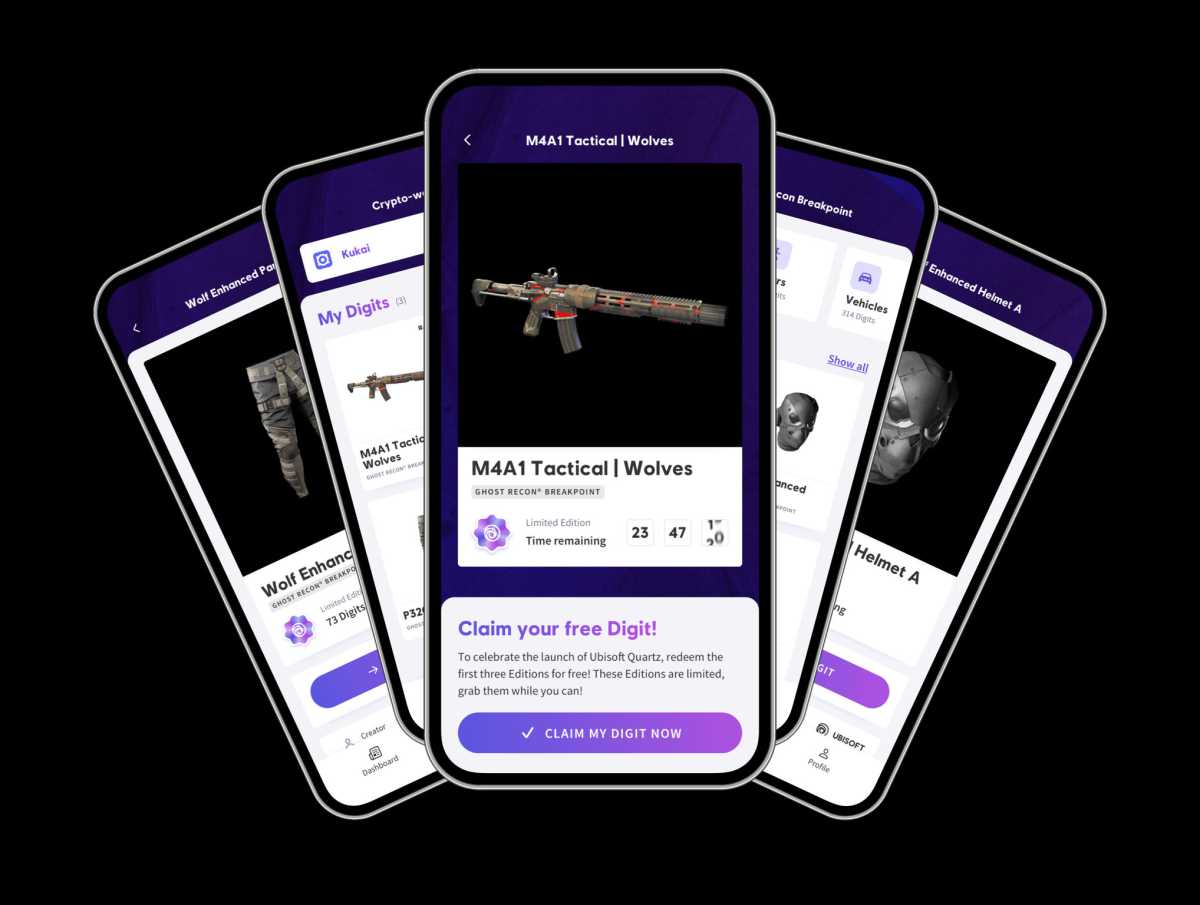 Square Enix is the other big publisher that also seems keen to hop on the NFT train. After an initial sounding of support last year, the company's president Yosuke Matsuda said at the start of 2022 that they will continue to invest resources into the concept.

All that sounds bad, at least if you're of the prevailing opinion that NFTs are ill-conceived at best and outright scams at worst. And any casual observer, watching the rise of microtransactions, battle passes, and live service games, might assume the worst: That the industry as a whole can't wait to jump on the latest trend that promises big returns for little to no work. But you'd be wrong. The industry, or at least a refreshingly large chunk of it, seems to be as skeptical of the NFT revolution as the rest of us.

Most publishers and developers aren't onboard

Take EA as an example. Electronic Arts is generally the number one target for the ire of gamers who tire of AAA excess and profiteering. But after initially calling NFTs the future of our industry, EA CEO Andrew Wilson told investors that the concept was not something we're driving hard on. He went on to compare NFTs to passing fads like 3DTVs.

And EA isn't the only game maker to turn a 180 on the concept. After announcing player-avatar NFTs for the upcoming S.T.A.L.K.E.R. 2, developer GSC Game World listened to feedback from the community and reversed its position, posting a terse apology and abandoning anything NFT-related in the project. 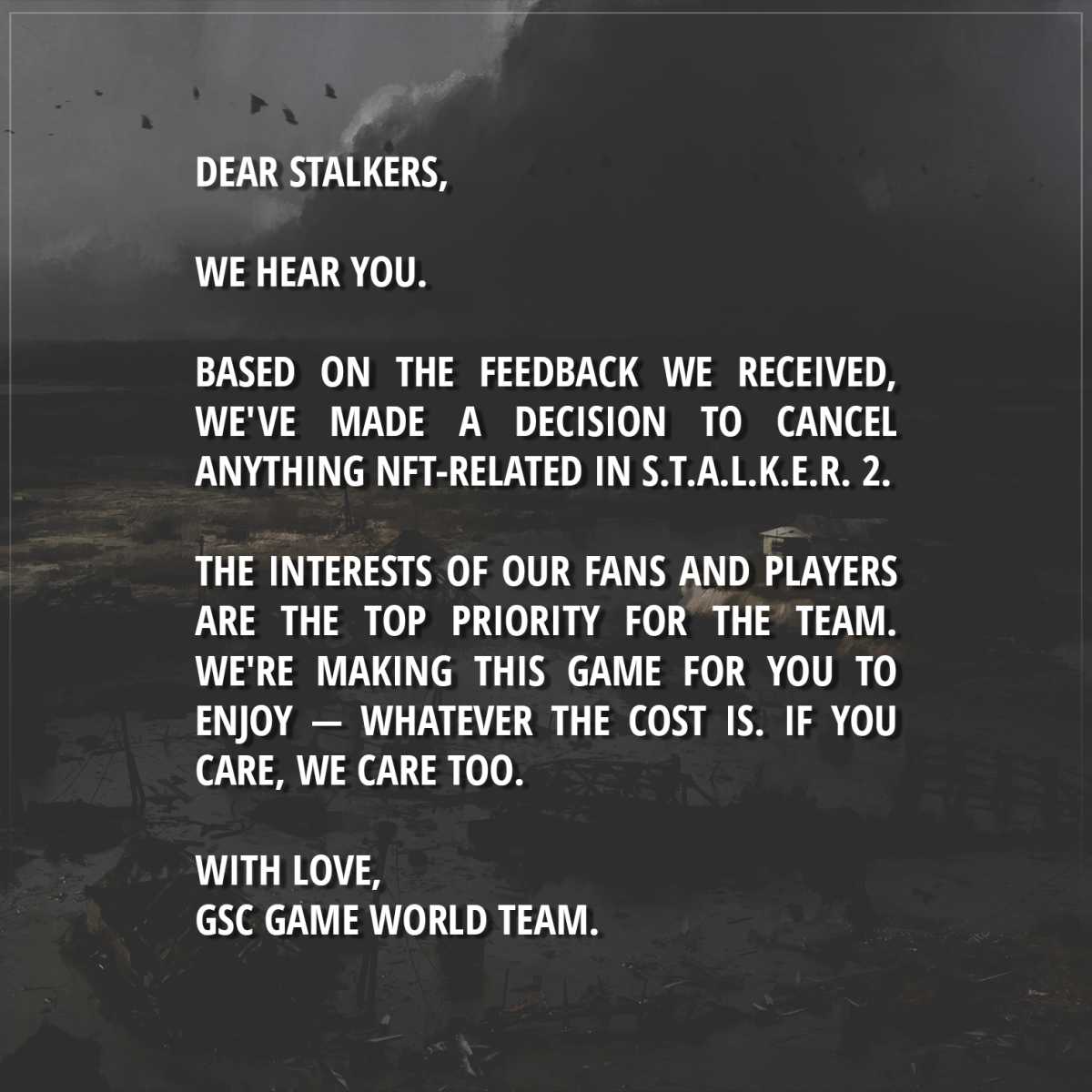 Phil Spencer, Microsoft's CEO of gaming, called NFTs more exploitative than about entertainment. At the Game Developers Conference last month, an overwhelming 70 percent of developers responding to the State of the Game Industry Survey indicated that they were not interested in non-fungible tokens. Even fewer wanted anything to do with cryptocurrency.

Perhaps the biggest denouncement of NFTs in the entire industry came from Valve. The company banned games dealing in cryptocurrency and NFTs from its storefront Steam in October of last year, shutting off the most pervasive and lucrative means of accessing the PC gaming market. (Inevitably, the Epic Game Store says it'll take NFT games that Steam doesn't want.)

Taking this broad look at the larger players in the industry, along with the general reaction from developers at a whole, gaming seems to be gunshy at the very least towards NFTs and a greater reliance on crypto-fueled aspects. Which is surprising, given that AAA publishers can generally be counted on to try just about anything that might squeeze a few more dollars out of their properties. It's possible that the NFT craze has risen and fallen so quickly, and been accompanied by so much negative sentiment, that even the notoriously fickle gaming industry is taking a pass. A tangential relationship to cryptocurrency, the cause of so many woes for PC gamers who want a new graphics card, might have something to do with that.

The market for those who want gaming-related NFTs doesn't seem to be suffering, as plenty of indie developers fill the niche. But the consensus among major developers appears to be forming: NFTs don't offer anything they can't already have with existing tools. NFT sales continue strong, but a crash in spending looms over the speculative market, and it may not be long before the nouveau finance types look for the next big scheme. Exceptions like Ubisoft and Square notwithstanding, it looks like we might be able to put aside the fear that NFTs will become pervasive in the gaming world.