Samsung has announced the next generation of its lovely Galaxy Book notebook lineup: The Galaxy Book2, boasting Intel's Evo specification and the use of Intel's first discrete Arc GPUs, as well as the luscious OLED displays that wowed us in prior iterations.

According to Samsung, the four notebooks are designed for security, mobility, performance, and seamless connectivity. All of them will use Intel's new 12th-gen Alder Lake chips and Windows 11, which will offer a total of 1.7X performance improvement over the prior generation, according to Samsung executives. The Galaxy Book2 series are also the first consumer PCs to meet Microsoft's secured-core PC specifications, adding what is otherwise enterprise-class security to the consumer space. 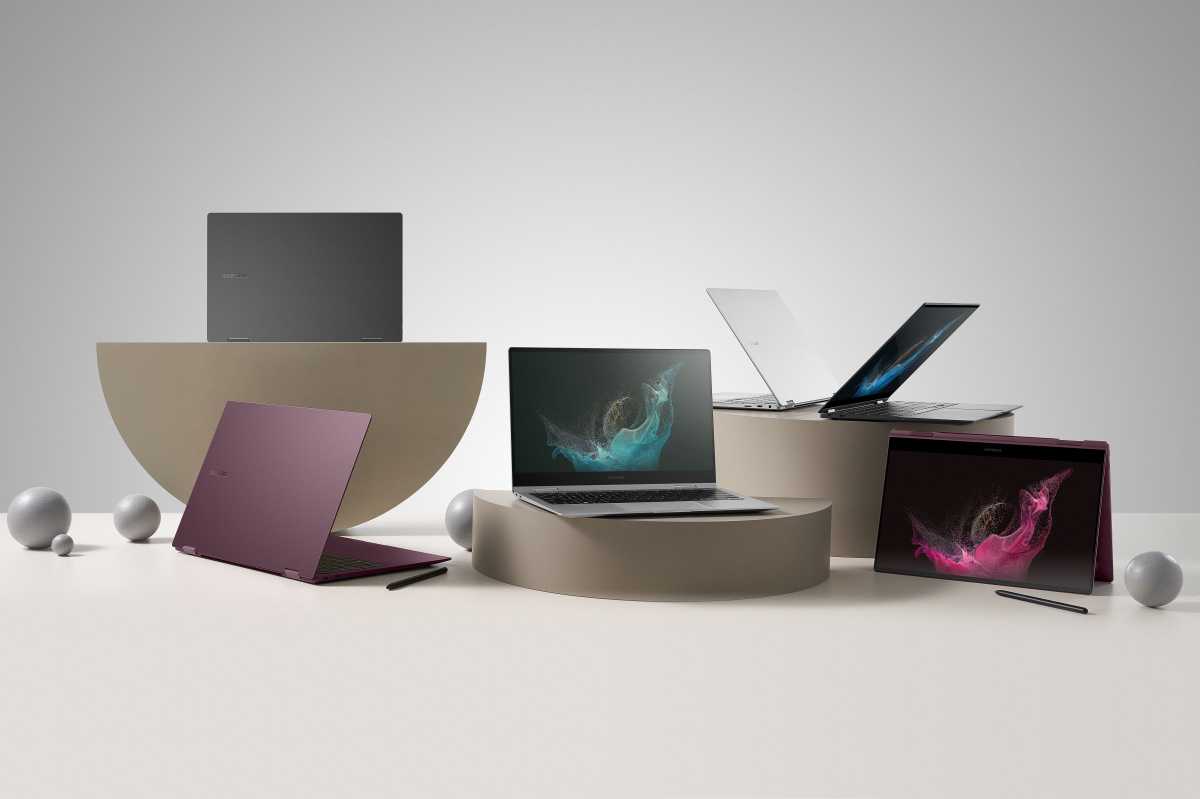 As it has done previously, Samsung continues to quietly push its own ecosystem, as well as ways that its notebooks interact with Windows. So, for example, you can use Samsung's recently-introduced Galaxy Tab S8 tablets as a second screen for your PC, or track your laptop using the Samsung SmartThings Find capability. Samsung uses the Smart Switch onboarding process to help transfer files from an older Galaxy Book to the new models, and Samsung includes its own proprietary utilities for digging out files that you've stored on your PC. Samsung has its own version of single sign-on, too, focusing on the Galaxy line of tablets, phones, and PCs. Both this capability and Samsung's Link to Windows are just improved versions of what Windows 11 already supplies, though in the latter case Link to Windows provides a superior version of Windows' Your Phone capabilities. 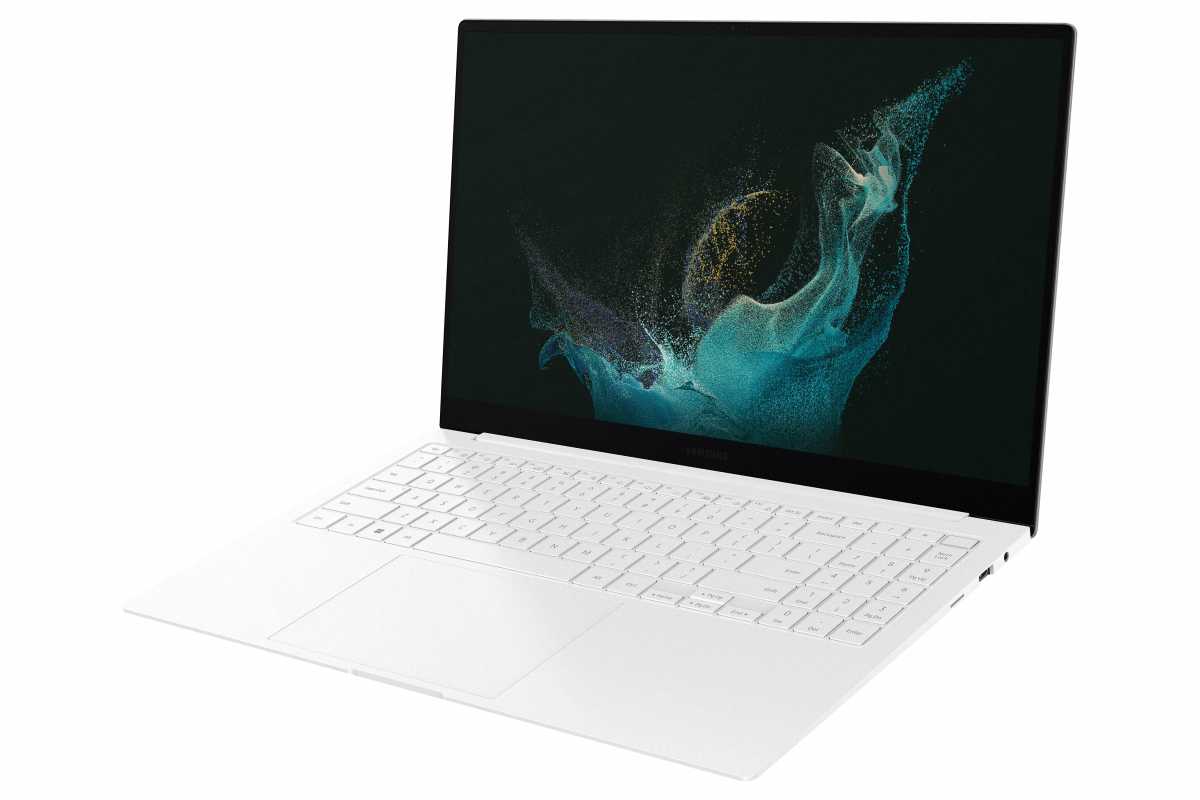 From a hardware standpoint, two things stand out. First, there's Samsung's continued use of the superb AMOLED display technology, which helps blacks disappear into the bezel of the screen. The key is that Samsung has also increased the available screen brightness by a third to 500 nits across the Book2 Pro, Book2 Pro 360, and Book2 360. That should be enough or nearly enough to work outside or in a brightly lit room. Secondly, Samsung has also added Intel's first Arc discrete graphics to the Galaxy Book2 Pro. (But not the non-Pro version, as fully 360-degree tablets from any manufacturer typically have slightly downgraded specs versus their clamshell cousins.)

Both the Galaxy Book2 Pro and Pro 360 ship with either 13.3-inch or 15.6-inch display options; the Book2 360 ships only with a 13.3-inch display. That only matters if you prefer a separate number pad to the right-hand side of the keyboard, as that's only available with the 15.6-inch option. They all ship with Samsung's integrated charger, which allows you to charge these laptops up to forty percent in just thirty minutes. 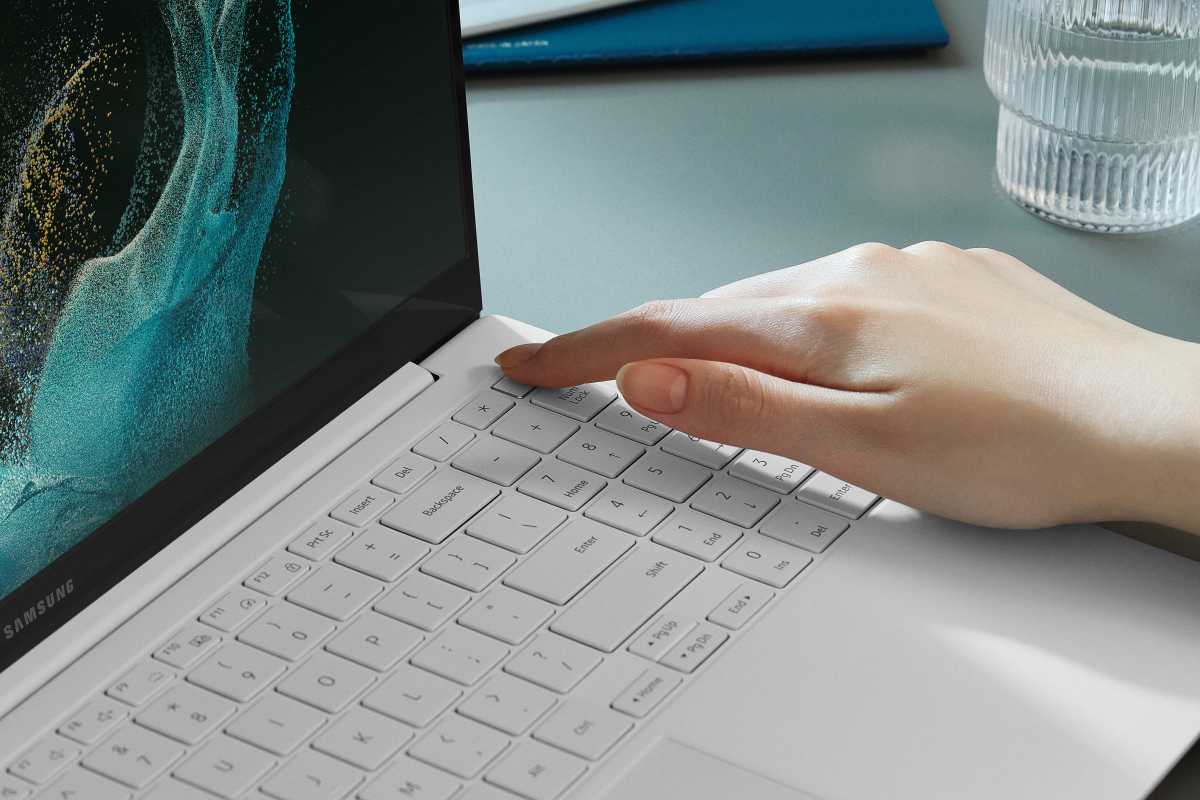 The 15-inch versions of the Samsung Galaxy Book2 Pro 360 and Pro include a number pad. Here, a user is touching the embedded fingerprint reader in the power button. Image: Samsung.

Not all of the new Galaxy devices support Samsung's S Pen, unfortunately. The Galaxy Book 2 Pro 360 ships with an S Pen inside the box, but the Book2 360 only supports it if you choose to buy it separately. The Galaxy Book2 Pro, however, does not include it or support it at all.

Samsung provided us with a list of the specifications of its new devices, which we've listed here. Nothing strikes us as particularly unusual, though the use of just a single Thunderbolt 4 port (versus the growing number of two-port devices) is a little odd. Note that most Book2 models have a second (non-Thunderbolt) USB-C port, however, which means that you'll have to pay attention to which port offers the higher I/O speeds.

The use of a 1080p webcam (as opposed to the more normal 720p webcams used by competing devices) is refreshing. Samsung widened the field of view (87 degrees versus 77 degrees in the older Galaxy Book) and added auto framing, which hunts for your face, and new Face Effects to make you look your best. The Book2 speakers pump out sound at 5W, bolstered by AKG and Dolby Atmos.

Below are the Samsung Galaxy Book2 Pro specifications. Though Samsung didn't list the processor in these specifications, we're told that both Core i7-1260P and Core i5-1240P options are available. Like all of the new Galaxy Book2 laptops, performance will be governed by an intelligence modem which will adjust the fan speed and thus performance depending upon the ambient noise, posture, and system load. We'll have to see what that means in the real world.

Samsung has also included the specifications of the Galaxy Book2 Pro 360, below. Samsung has only told us of a Core i7 option with the Core i7-1260P inside.

The specifications for the Samsung Galaxy Book2 Pro 360. Image: Samsung.