TeamViewer is easy, free for personal use, and ticks all the remote control software boxes such as chat and file transfer. Meetings and remote video help are also part of the deal if you pony up for a subscription.

TeamViewer is remote connectivity software for PCs that's as powerful as they come, yet free for personal use, and easy enough for the uninitiated. I've used it extensively with computer-challenged relatives—to great praise and benefit.

Like all remote control software, TeamViewer lets you log onto another computer and use it as if it were your own. If your older relatives are having a problem logging on to their bank account, have them download and run/install TeamViewer, call you with the ID and password, and you can log on and explain stuff. (Or, more likely, simply fix the problem.) 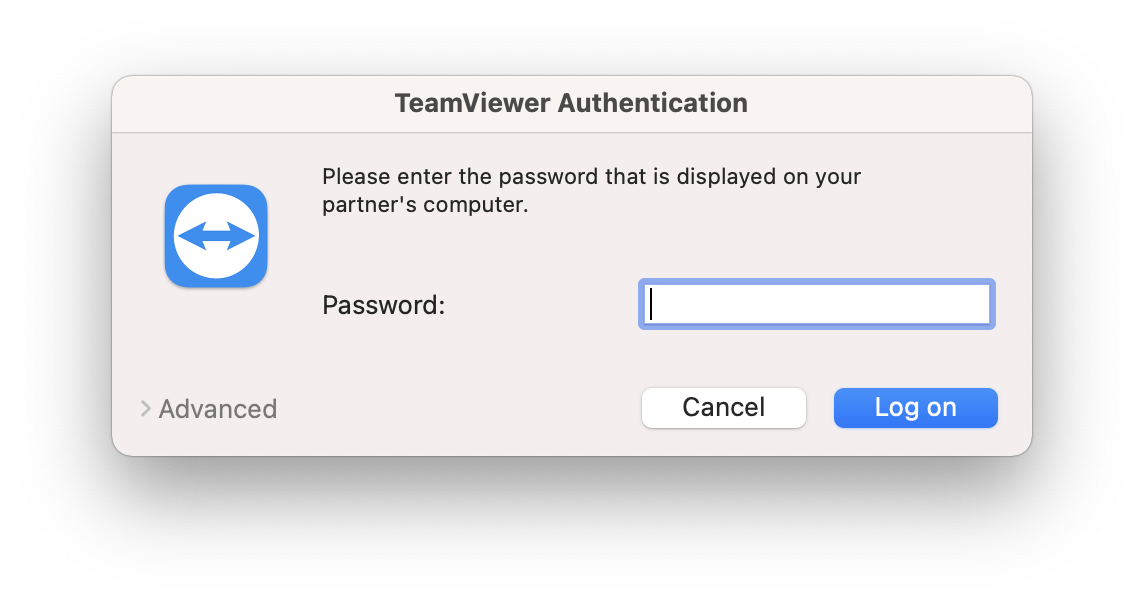 Once you're logged on, you can also help them set up the computer for unattended access, so they don't have to repeat the download/install process or provide you with the ID and password. As the name of the function implies, they don't have to actually be at the computer either. So long as it's still running, you're good to go.

Normally, you'll view the remotely controlled computer's desktop in a window on the machine you're controlling it from. Note the options at the top of the window shown below. On the other end, TeamViewer will open a tab in the lower right-hand portion of the helpee's desktop. 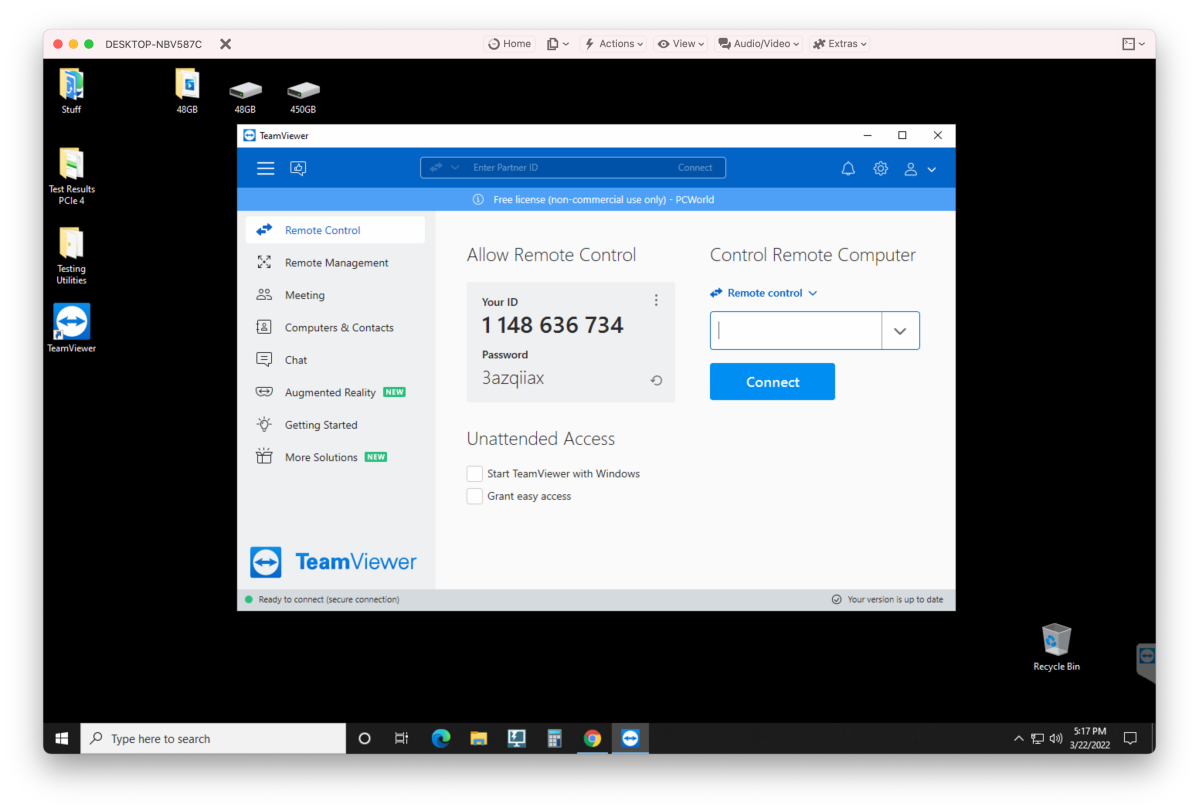 Controlling a Windows PC from my Mac running macOS. I could do the opposite if I wanted.

This serves to notify them that there's someone remotely logged onto the machine (the desktop background also turns black), and also provides the mechanism to end the session at any time. You can see it in the screen capture below in its retracted state.

TeamViewer also allows file transfers, has a chat function, supports multiple displays, and will keep track of all the computers you've logged onto if you have an account. Without one, it still remembers IDs (which don't normally change) though you're on your own as to which is which.

As of March 2020, at the beginning of the you know what, TeamViewer also implemented a meetings function. Yes, another player you probably didn't know about in the rush to Zoom. The company is also offering remote video help along the same lines.

There are TeamViewer clients available for Windows, macOS, Linux, iOS, and Android. You can pretty much control any device from any other device. Nice.

TeamViewer's interface is clean, simple, and easy—once you know it. The one recurring issue I've had with new, and even repeat helpees is that they often don't spot the ID and password right away. Take a look below. 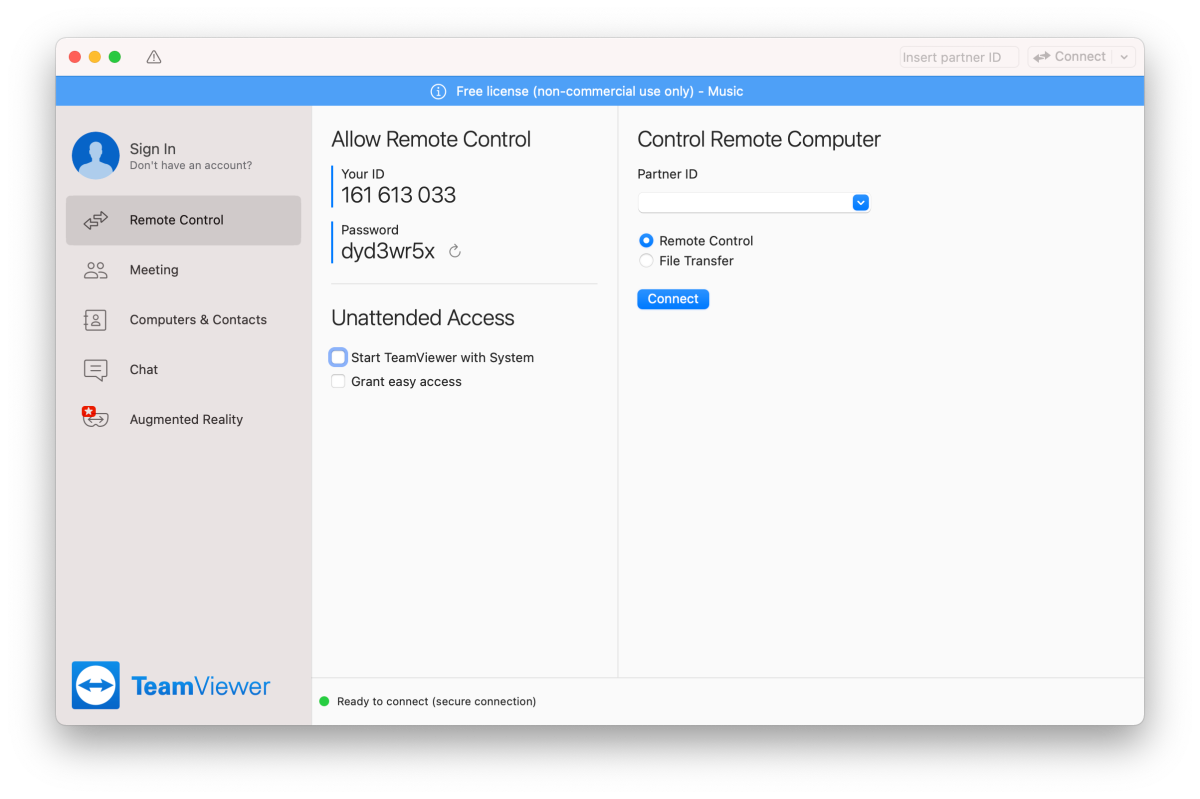 The problem is that eye is drawn to the far-right column because of the bold blue elements—especially the one that says Connect. Understandably, new users will gravitate to this button. I'm so used to this, I just clarify middle column when I sense hesitation.

Anyone who's savvy enough to control another computer using TeamViewer should be capable of locating that functionality. If the screen below were presented to the prospective control-ee, it would cut down on a lot of explain time. 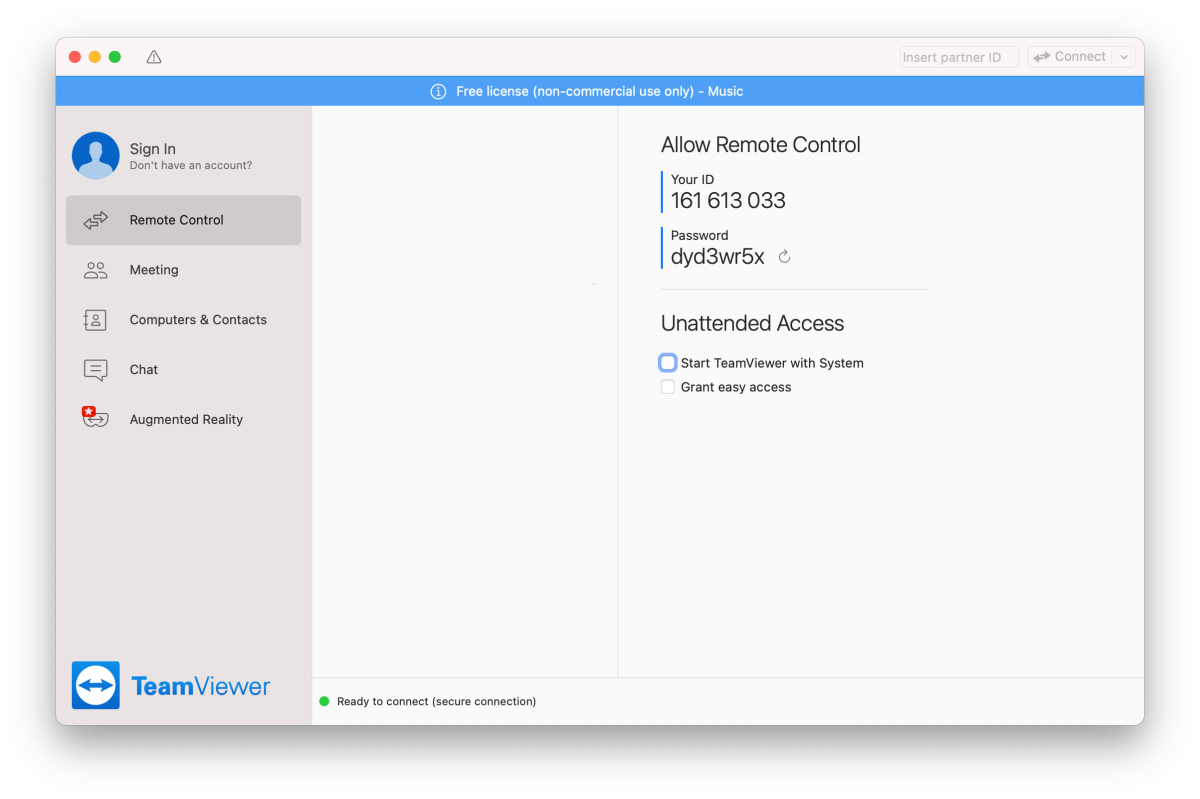 This is my edit of a screen shot portraying what I wish end users would see so I don't have to spend 30 seconds every time telling them where this info is located.

Perhaps separate control and access on the lefthand navigation pane, and have the program remember which section you were on. That way, both helper and helpees would always see only the pertinent options.

While TeamViewer is free for you and me, the company is not Google with a gold mine of a search engine–it makes its money in the enterprise and large business sector. If you're a small to medium business, or IT with remote control needs, a TeamViewer account makes a lot of sense. For the average user, not so much. The image below shows why. 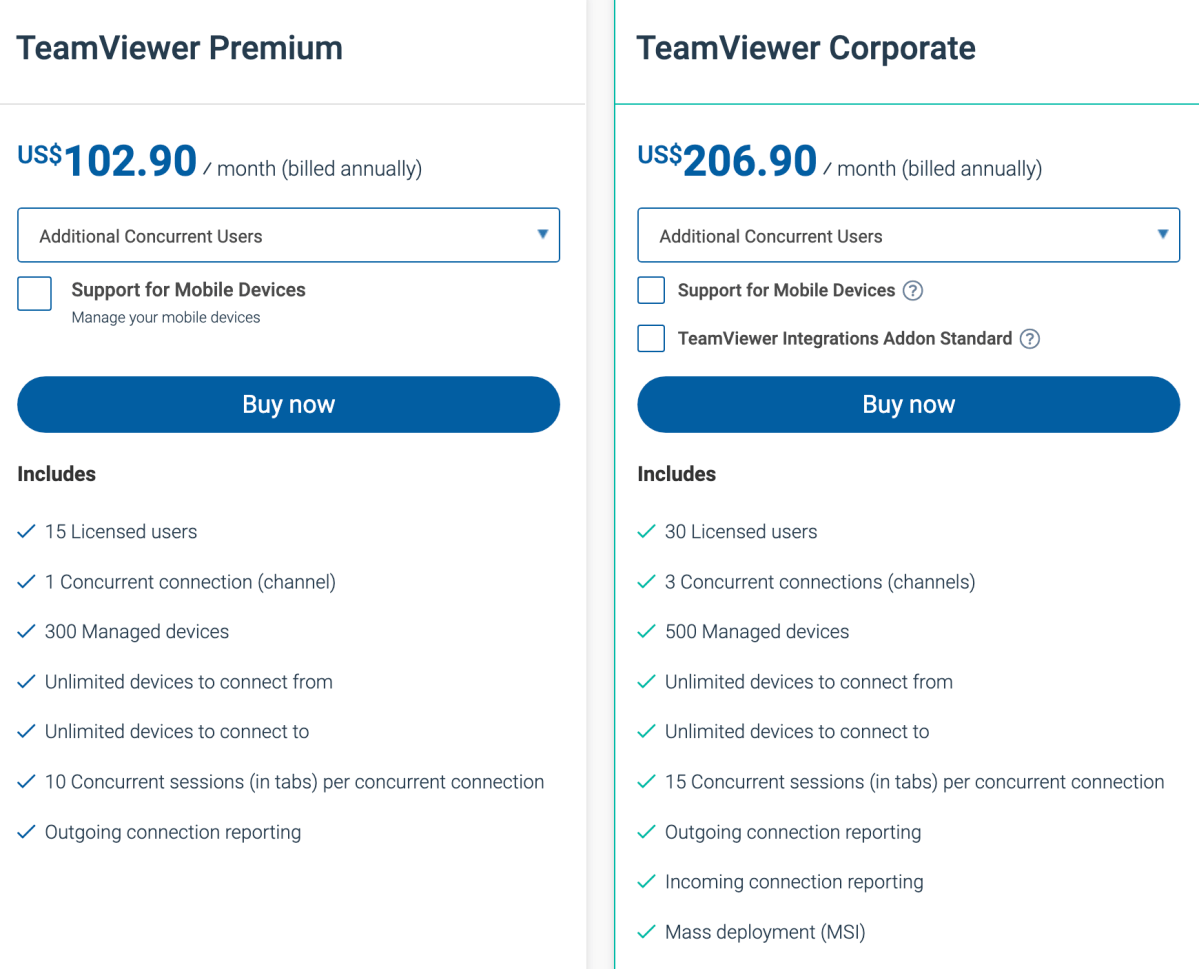 TeamViewer's pay plans are pricy for the average user, but more than worth it for business users and IT firms.

For said businesses with the need, there's nothing better for remote control, or better supported that I'm aware of. And IT contractors can easily cover the cost via customer billing. Also, the pricing looks like a bargain when you start adding PCs to a service such as GoToMyPC.

TeamViewer is free, but they do keep track of how many times you use it. It won't nag you often if you play fair.

TeamViewer is free for occasional, personal use. Don't abuse it. If you do use the program too often, you'll get dialogs offering you a pay version. I'm not sure what happens if you ignore said warnings, as I never have, but obviously there's some telemetry between the company and the clients.

I've used TeamViewer hundreds of times over the years, and it's always functioned perfectly. And in these days of ever-expanding bandwidth, it can be surprisingly facile. I've transferred files, helped out my sister, mother, and friends with nary an hiccup.

Used on a local network, TeamViewer also seeks the shortest route once IDs have been exchanged, so most data never travels outside the LAN, making control very quick.

The easiest, most complete freebie

As TeamViewer is free for personal, occasional use and far easier to set up than VNC, Microsoft's and Apple's Remote desktops, and others, it's what I use for ad hoc support. That said, Chrome Remote Desktop, though not as full featured is a competitor.

Kudos to TeamViewer for providing it. It really is a lily among the thorns, so use it as the company requests.