When I started working for MacUser magazine in 1993, I was assigned to a gray cubicle with an old Mac IIci inside. (The summer intern didn't get the latest and greatest.) I don't know how that was nearly 30 years ago, but here we are.

Over the last few years, I've spent a little time buying a few old Mac models and getting them up to speed. Within five feet of me as I write this are a working G4 Cube, G4 iMac, Mac Plus, PowerBook 170, and even a Power Computing Mac clone.

As much as using old computers can be a fun nostalgia trip, it also makes me appreciate what we have today all the more. You remember the good times, but forget the bad! As someone who recently had to figure out how to boot a SCSI drive, let me tell you how good we've got it.

A decade or more ago, I got an email from someone I knew saying that he had an old SCSI drive, and did I want it? (For those of you who don't know what SCSI is, get off my lawn. Pronounced scuzzy, it was the high-speed peripheral connection standard for the Mac for most of its first decade, used primarily for hard drives but also by scanners and all sorts of high-end hardware.) I apparently agreed, thinking I might get around to attaching it to an old Mac Plus I had laying around my house. Since the person who sent it to me no longer had a Mac with a SCSI port, he asked me to send him any stray files that I found on it.

A decade passes, and I'm finally spending some time getting a couple of old Macs working when I find that SCSI drive, which I have never connected to anything. So I set about trying to see if I could figure out what was on it. And this is when I am reminded of the horror of SCSI, and how happy we all were to see its back when the iMac brought USB onto the scene in 1998.

Consider how we all connect hard drives and other peripherals to our Macs today. If there are wires at all, they're probably USB or USB-C or Thunderbolt (which is sometimes shaped like USB-C) or maybe lightning. But in the end, you plug a cable into the Mac and the thing attaches. When you're done, you eject any mounted volumes and unplug. That's it.

This is called hot plugging, and it was very much not allowed in the SCSI era. If you wanted to connect a SCSI hard drive to a Mac back then, you were supposed to shut down your Mac entirely, then plug in the drive, power it on, and boot the Mac back up. Want to disconnect? Shut down, power down the drive, and disconnect. Any other way, we were told, could lead to Certain Death, or at least the destruction of the data on our SCSI drives.

Hot plugging wasn't just for SCSI. We were also not supposed to plug or unplug any other device without shutting down the Mac, especially if it carried power, like the Apple Desktop Bus (ADB) ports in our keyboards and mice. And here I have a confession to make: I hot-plugged ADB devices all the time! And I don't think any Mac or keyboard died in the process, so far as I can remember.

SCSI was even worse, though. Because SCSI let you daisy-chain devices (just as you can with USB and Thunderbolt), each device needed its own unique ID… which SCSI wouldn't assign! Instead, SCSI devices tended to have a very small wheel or clicker widget on the back that let you set the SCSI ID, which couldn't conflict with any other ID on the SCSI chain. (Any conflict would make your Mac refuse to boot.) And, of course, changing a SCSI ID needed to be done with everything powered down.

But wait, there's more! The last item in a SCSI chain needed to be terminated, indicating that the chain was complete. To do this, you'd pop a weird plastic block on the last SCSI port. If you didn't… your Mac might still work, or it might not. Who knows?

What I'm saying is, USB and Thunderbolt are really nice and you shouldn't take them for granted. 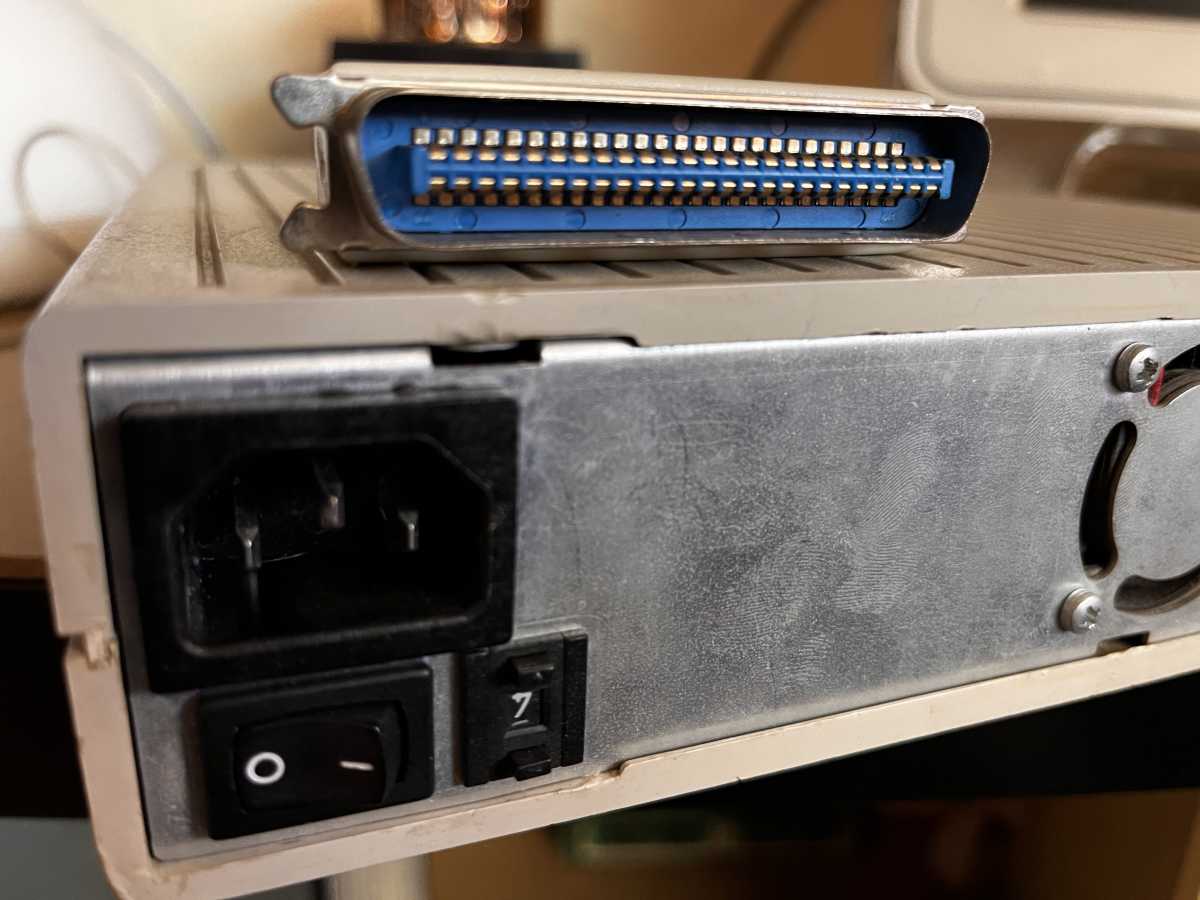 Oh, the horror of SCSI. The horror. Image: Jason Snell

Another bit of gratitude for today's Macs I've found when reviving old ones is the utter lack of network connectivity on older models. Okay, that's not fair: the Mac (famously) shipped with a serial port for connectivity right from the beginning. But a serial port is not a network, and it took a very long time for Macs to acquire their very own ethernet ports. Earlier Macs connected to networks via expansion cards or little boxes attached to ports on the back.

My first Mac network was one I set up in the office of my college newspaper, using telephone wire and little plastic adapter boxes. It was laughably primitive, but it meant we could transfer files (using special software, since the Finder didn't really support it until System 7 arrived) and even print to a shared printer instead of having to carry our files over to the Mac connected to the printer.

While the evolution of the web means that old Macs running old browsers can't really browse the modern web without using a special proxy server, and the most modern version of macOS doesn't support the classic AFP file-sharing system, if an old Mac has an ethernet port on it, you can find a way to get it connected to your local network to transfer files.

But these days ethernet has exited the picture, at least on Mac laptops, and let me inform you that Wi-Fi connectivity is not all it's cracked up to be. Advances in the Wi-Fi standard mean that the oldest versions of Wi-Fi are no longer supported by most modern base stations. The AirPort card in my Power Mac G4 can see the name of my local Wi-Fi network, but it can't connect–it's just too old. I fear that today's Mac laptops will be harder to get on networks in a decade or two.

(I don't have the space to get into all the vagaries of Apple's display port choices over the years. But it feels like this is one of those areas where the company hasn't really learned its lesson. Relatively recent laptop models have used unusual HDMI and DisplayPort connection standards, and there's always a question about what forms of Thunderbolt will drive what sorts of displays. It's better than the old days when Apple seemed to invent a new nonstandard display format every year, but only a little better.)

When you spend time with old Macs, you do end up getting a new perspective on Apple's current tech choices. I appreciate that the detachable magnetic power cable in the 24-inch iMac lets it be much thinner, but there's a part of my brain that's already mourning how frustrating it's going to be in 2040 when someone wants to boot one of those iMacs up and has to source an entirely nonstandard power cable from eBay. 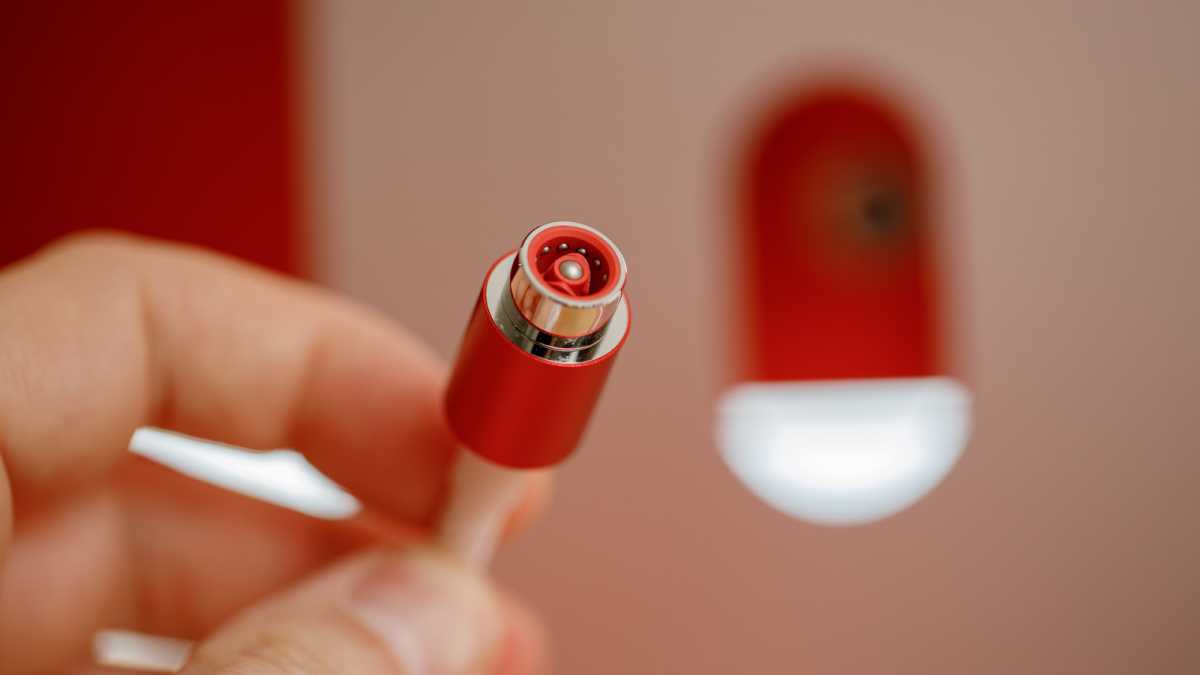 While the 24-inch iMac's magnetic power cable is designed well, it's not a standard connector. Years from now, if you need a new cable, it could be difficult to find. Image: Dominik Tomaszewski/Macworld U.K.

Finally, an unexpected delight: The amazingly powerful, compact, and low-power technology of the last decade has made reviving old computers easier than ever before, in some surprising ways. I managed to boot up my wife's college Mac, a Mac 512 upgraded to a Mac Plus, using a remarkable device called a Floppy EMU (pictured at the top of this article).

The Floppy EMU is a tiny computer that connects to the floppy drive port on very old Macs and emulates a connected floppy drive or early Apple hard drive. It's got a tiny screen, a few control buttons, and an SD card slot. You load old Mac disk image files onto the SD card, plug the Floppy EMU into an old Mac, turn the Mac on, and use the device's buttons and display to choose which disk image file should be inserted. That's it. You could probably fit almost every piece of software that the Mac Plus could run on a single micro SD card.

And yes, there's one that does the same thing for SCSI. If you remember what SCSI was, you will not be surprised to discover that the BlueSCSI is not compatible with all models of old Macs due to inconsistencies involving SCSI termination. Of course.

Oh, and what was on that SCSI drive I had kept for more than a decade? Absolutely nothing. It was a freshly reformatted, blank volume with nothing on it. At least I didn't have any files to return to the person who sent it to me–which is good news, since I don't remember who it was!