The arrival of the Mac Studio marks the first time in a while that Apple addresses a group of Mac users who have long been neglected. These users had largely turned to the 27-inch iMac to fit their power and budget needs, and Mac Studio finally gives them a headless Mac worth considering.

The Mac Studio is in some ways a brand new Mac, and in other ways, it's an evolution of Macs that came before. Obviously, the Mac Studio fills the gap left when Apple discontinued the 27-inch iMac, but at the same time, it's also an evolution of the Mac mini and a call back to the Mac Pros of old.

So whether you're looking to upgrade from an old all-in-one or add a new Mac to your collection, you're probably wondering how Mac Studio compares to the iMacs it has replaced and whether it's a worthy replacement for Apple's upper-end iMac. Spoiler alert: If you're concerned that the Mac Studio won't be a suitable update from your existing iMac, you need not worry.

The iMac is easily Apple's most famous computer, the one that set Apple on its trajectory to becoming the company it is today. What started as a colorful consumer all-in-one has evolved quite a bit over the years, with the most recent 27-inch model sporting a beautiful 5K Retina display, Intel 10th generation Core i9 processors, up to 128GB RAM, and up to 8TB storage. For a brief time, Apple also sold a 27-inch iMac Pro that used Intel Xeon W processors with up to 18-cores, a variety of high-end graphics cards, and up to 256GB RAM and 4TB storage. 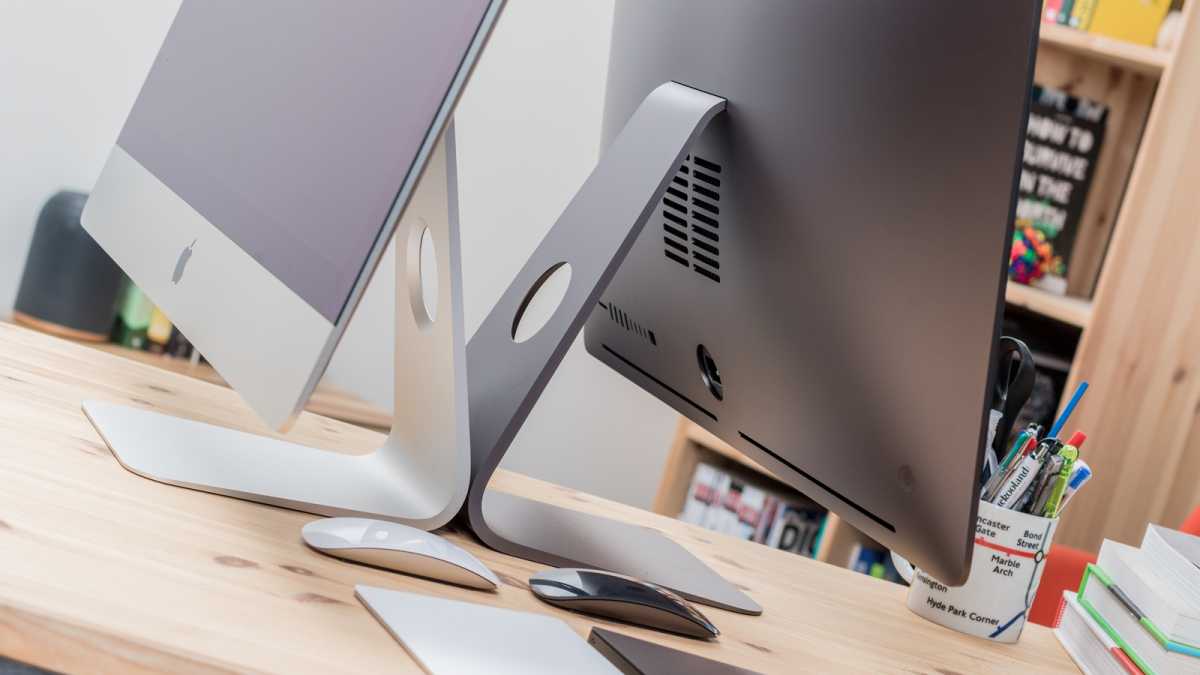 iMac and iMac Pro: up to 18-cores of power. Image: Dominik Tomaszewski

In contrast, the Mac Studio is just the computer part—it lacks a display, keyboard, and mouse—but it does offer up to a 20-core CPU, 64-core GPU, 128GB RAM, and 8TB storage, far outpacing any iMac ever made. If you're upgrading from an iMac, however, you'll need to purchase a new display, since you can't use Target Display Mode on M1 Macs.

The now-discontinued 27-inch iMac was last updated in August 2020 when it got the 10th-generation Intel Core i5 or i7 CPU as standard configurations, alongside the Radeon Pro 5000 series graphics. It only offered 8GB RAM as standard and the entry-level storage option was 256GB SSD. If you wanted more oomph, there were build-to-order options that included an Intel 10th generation Core i9 processor with up to 10-core CPU, up to 128GB RAM, an 8TB SSD, and Radeon Pro 5700 or Radeon Pro 5700 XT graphics. To get the ultimate configuration, including 128GB RAM and the maximum storage capacity, you would've paid more than AU$12,000.

While comparing Intel and Apple chips isn't straightforward, the Mac Studio specs and price already make it look like a much better value for your money, even without a keyboard, monitor, and mouse. If you stick with the base model, a 10-Core CPU/24-core GPU M1 Max, 32GB RAM, and 512GB SSD for US$1,999 (AU$3,099), you're already getting a faster machine, even if you had bought a fully loaded 27-inch iMac. And if you upgrade to the US$3,999 (AU$6,099) M1 Ultra, you'll absolutely blow the doors off your old iMac.

To really see the difference, look at these benchmarks, which are from the 2020 iMac. The Mac Studio here is the 32-core M1 Max model that costs US$2,199 (AU$3,399), more than half the price of the iMac. So any configuration you choose will give you more power than you had before.

Anyone spending this much on a new Mac is going to have a lot of peripheral devices to attach and the Mac Studio hasn't lost any of the expansion and capability in the 27-inch iMac. Here's what the iMac had:

And here's what the Mac Studio has:

So no matter your setup, you won't need to worry about the available expansion ports on the Mac Studio. If anything, you'll have more than you need.

The 27-inch iMac had hardly changed its appearance since the slim unibody version arrived in 2013. We were expecting a redesign to bring it in line with the 24-inch M1 model, but Apple instead gave us two separate devices: Mac Studio and the 27-inch Studio Display.

The Mac Studio looks like a tall Mac mini, roughly equivalent to three minis stacked on top of each other. It's a compact and neat design that won't take up too much space on your desk and handily sits under a Studio Display or most other monitors. Basically, if you have room for a Mac mini on your desk, you have room for a Mac Studio. It has a simple design that looks good but isn't nearly as striking as a 27-inch iMac and only comes in silver, though your Space Gray iMac Pro accessories will still look great. 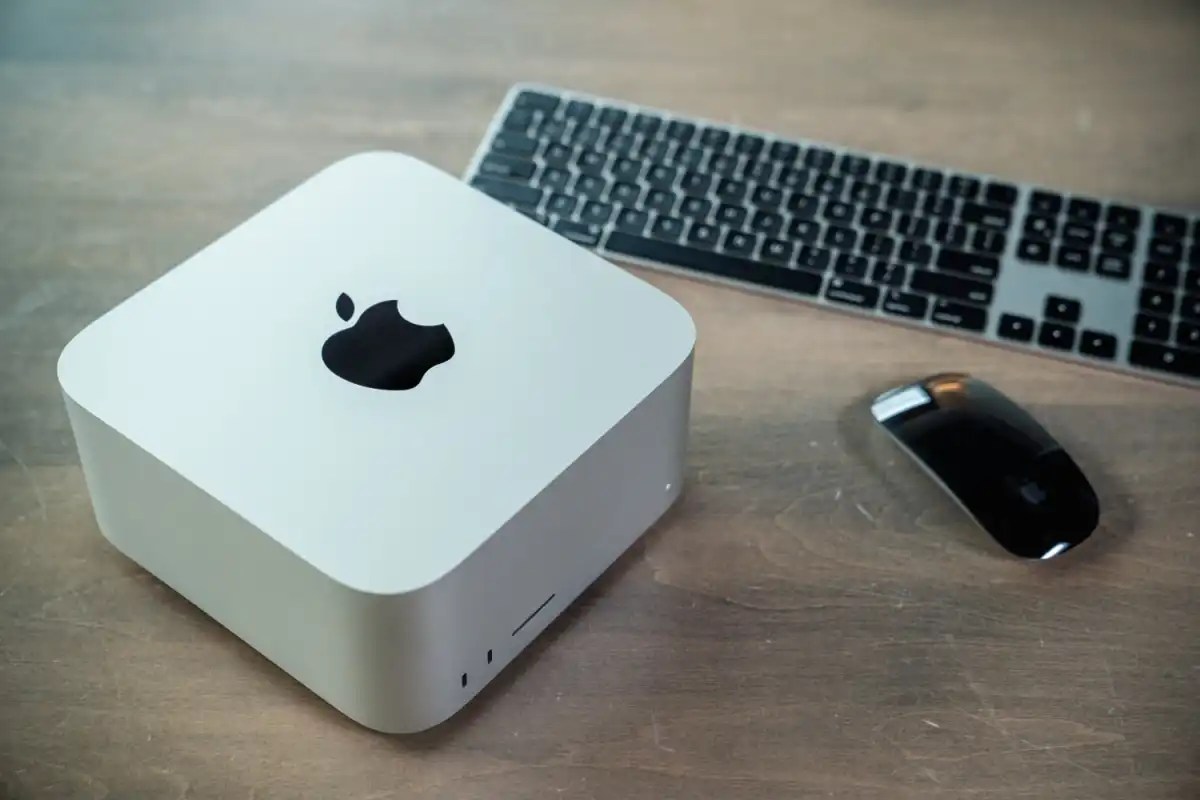 The display is obviously the biggest difference between the iMac and the Mac Studio. On one side, you have a Mac that has a 27-inch 5K display built into it, and on the other a Mac that doesn't have a display at all. To make up the difference, Apple is selling a 27-inch Studio Display starting at US$1,599 (AU$2,499) for those who want an iMac-like experience–and it offers some features that weren't available on the 27-inch iMac. At the ultra high end, Apple sells the 32-inch Pro Display XDR that costs US$4,999 (AU$8,499) and doesn't even come with a stand (that's an extra AU$1,500).

The Studio Display has a native 5K resolution of 5,120×2,880 at 218 pixels per inch, with 600 nits of brightness, support for the P3 color gamut, and True Tone. That's very similar to the 27-inch iMac's display, which had the same features and resolution but topped out at 500 nits brightness. Like the iMac, the standard Studio Display uses standard glare-resistant glass with a matte nano-texture glass option for an extra US$300 (AU$500).

The design is very similar to the 27-inch iMac without a chin, and functions in the same way—you can tilt the screen but not adjust the height. Apple does offer a tilt-and-height adjustable stand for the Studio Display that costs another US$400 (AU$600). 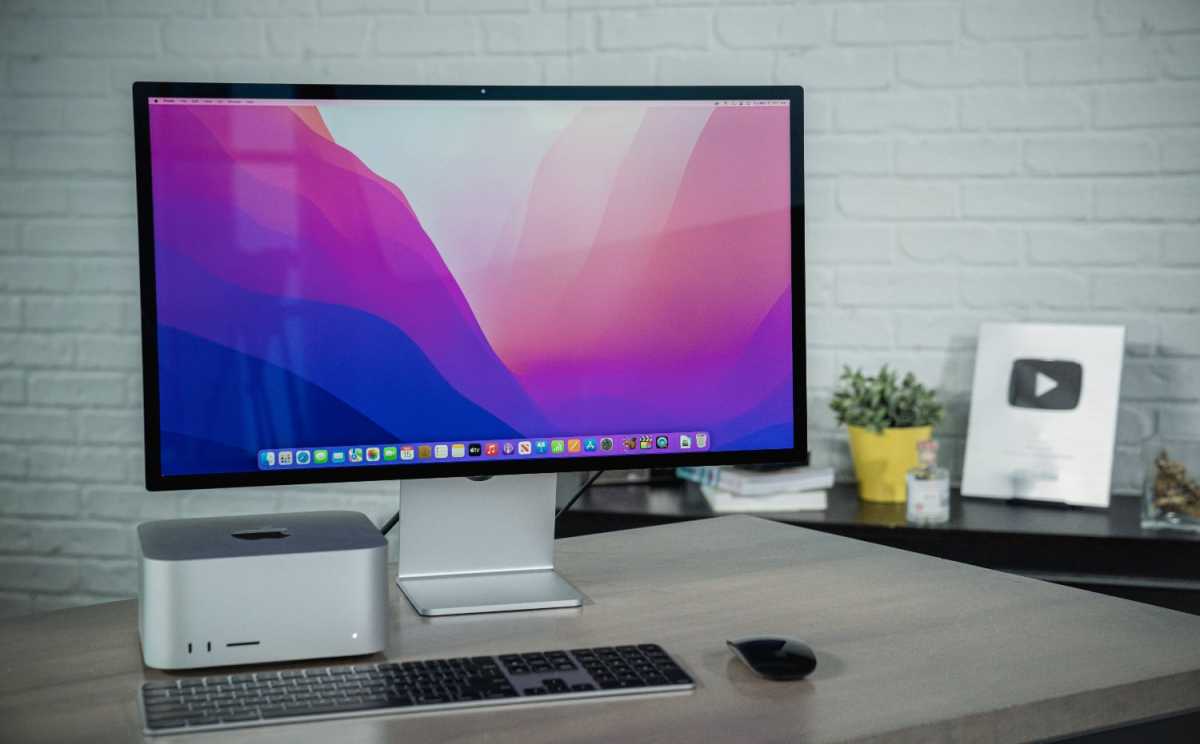 The Mac Studio can be coupled with a Studio Display. Image: Willis Lai/Foundry

The Studio Display has a few features that the iMac and other Macs and third-party displays lack, thanks to the inclusion of an A13 chip (as seen in the iPhone 11). These features include a built-in 12MP Ultra Wide camera, which is an improvement over the 1080p FaceTime HD camera in the 27-inch iMac. The camera also includes support for Center Stage, which automatically keeps you centered in the frame if you move while on a call.

The Studio Display also has a three-microphone array with directional beamforming for Hey Siri support, as well as six speakers (four force-canceling woofers, and two high-performance tweeters) with Spatial Audio. Finally, you get three additional USB-C ports on the back.

Of course, you don't have to spend that kind of money to get a decent display. Any monitor will work with the Mac Studio, and you can get a very good 27-inch monitor (or bigger) for far less than US$1,599 (AU$2,499). Most of them won't have a camera, high-end speakers, or far-field microphones, so you'll need to weigh how important those features are.

To match that with a 27-inch iMac, you would have been looking at a build-to-order option as the 10-core model wasn't standard. If you wanted to max out your 27-inch iMac with a 3.6GHz 10-core Intel Core i9 and 32GB RAM, you would have been looking at a price of US$3,299 (AU$4485), very close to the Mac Studio and Studio Display bundle above, and not all that far off the price of the M1 Ultra Mac Studio (without a display, of course).

There is no doubt that the Mac Studio offers an improvement over the 27-inch iMac, not only in specs but also in value. When you break down the price of a comparable 27-inch iMac, you're getting a much better machine with more expandability and versatility for less.

But if you're looking for a replacement for a higher-end iMac at a similar cost, you'll be extremely happy with the Mac Studio, no matter which display you decide to pair with it.