The introduction of the Mac Studio was exciting for many reasons—one of which was the unveiling of yet another addition to the M1 series of Apple's System on a Chip (SoC). The M1 Ultra, found in the US$3,999 (AU$6,099) Mac Studio, brings an entirely new level of performance, adding to the dust that the Intel processors were already left in. It's essentially two M1 Max chips fused together to bring double everything: 20-core CPU and 64-core GPU, 32-core neural engine, four video encoding engines, four ProRes encode and decode engines, and up to 128GB of LPDDR5 unified memory with 800GB/s of bandwidth.

But is the M1 Ultra really twice as fast as the M1 Max? Data can give us an idea of how it compares to the M1 Max and more importantly, how the M1 Ultra affects real-world workflows of pro users. Let's see what this pint-sized powerhouse has to offer and understand which model is best suited for you.

The Mac Studio M1 Max may look identical to the M1 Ultra model at first glance, but there are important differences to be aware of. For starters, the Ultra is heavier, clocking in at two pounds more than its svelte twin due to its muscular copper blower under the hood. This increased cooling power is obvious: the Ultra doubles up on horsepower compared to the Max and generates a lot more heat. 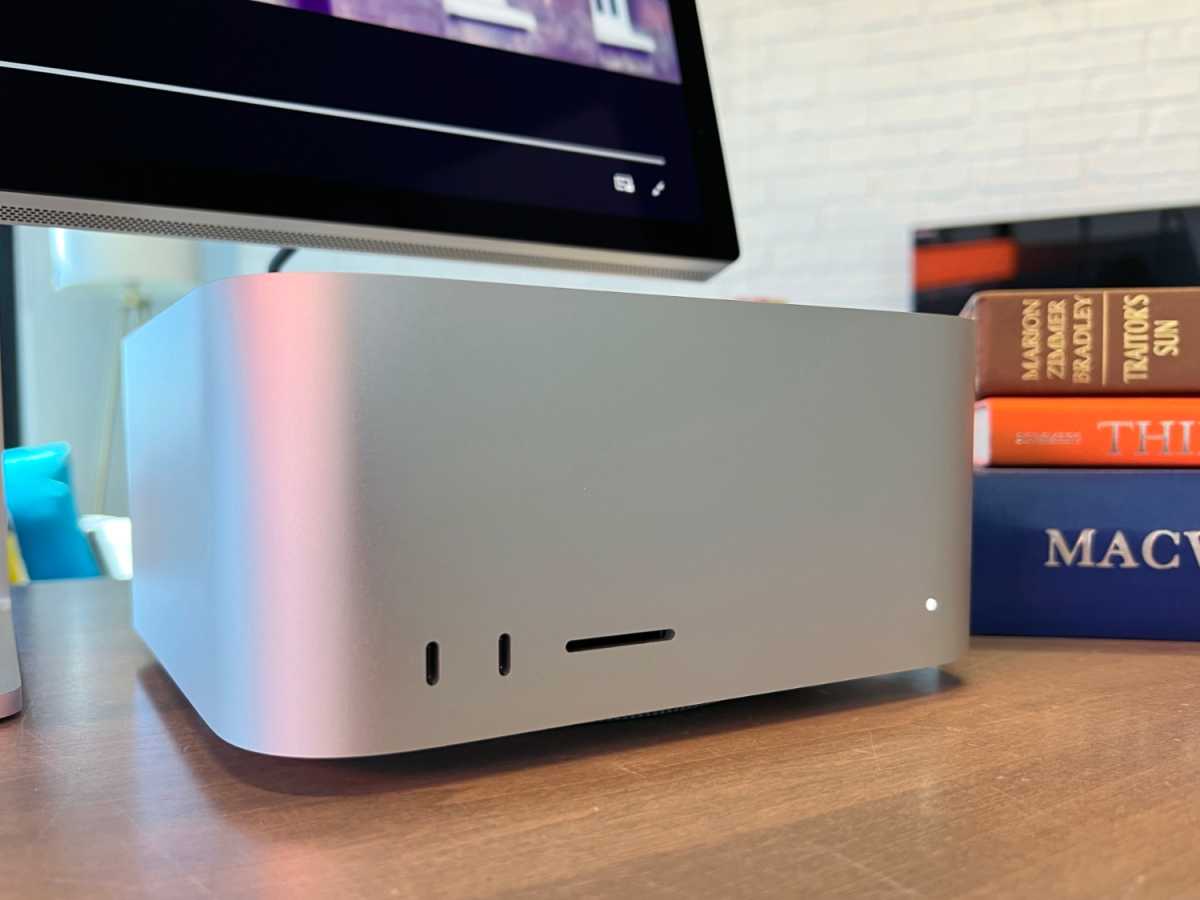 The M1 Ultra and M1 Max versions of the Mac Studio look identical on the outside. Image: IDG

The Ultra model also has two Thunderbolt ports on the front, while the Max model has slower USB-C ports. If you're connecting peripherals that require the speed of Thunderbolt ((up to 40Gb/s), which is four times faster than USB-C. The Ultra Mac Studio can be customized with 64 GPU cores (the Max model's limit is 32 cores).

Geekbench has been used for years as a point of reference for performance on Macs. For CPU performance, the M1 Max and Ultra posts Single-Core scores that are practically identical (as with the other M1 chips), but the M1 Ultra almost doubles the Max's Multi-Core score. For reference, a 2019 Mac Pro with a 28-core 2.5GHz Intel Xeon W processor gets a paltry 1,034 Single-Core score but hangs in there with a 26,604 Multi-Core performance.

How does this translate to real-world use? With fast single-core performance, this means that your everyday software will open and respond much faster. Some apps may even favor single-core ability for its performance–much like how 3-D games generally do better with higher clocked CPUs instead of multi-core offerings. Photo editing apps such as Photoshop also benefit from single-core performance. The high multi-core abilities mean you'll also be able to multitask more with apps that can take advantage of all of the cores.

Video rendering will often lean on the GPU performance for many effects and heavy-duty work. Geekbench 5 offers two benchmarks for graphics in its Compute suite: one test using the Metal API, and the other using OpenCL.

The M1 Max posted a Metal score of 69676 and an OpenCL score of 60,667. The M1 Ultra with a 48-core GPU bests this with scores of 91,949 and 70,464, respectively. It gets better with an M1 Ultra with a 64-core GPU, with respective scores of 106,263 and 91,751. The GPU improvement is significant: Apple offers only ProRes hardware acceleration, and for non-ProRes codecs used in a lot of 3-D and video-editing apps, GPU is the key. For example, when using the R3D Raw codec, GPUs come into play and the built-in ProRes accelerators in the M1 Max and Ultra have no effect.

The 2019 Mac Pro with an AMD Radeon Pro W6800X Duo graphics card posted a 138,000 Metal score, still showing a performance gap versus the M1 series that may be only filled by an eventual Apple silicon Mac Pro.

With the Cinebench R23 benchmark, CPU rendering is the focus, and the M1 Max is no slouch with scores of 1538 (Single Core) and 12388 (Multi Core). The M1 Ultra puts up an almost identical Single-Core score, but once again it nearly doubles the Multi-Core score. Both CPUs will give you blistering performance for single-core usage, but the Ultra will really shine if CPU rendering is pivotal to your workflow.

When converting a 4K video file to 1080p in HandBrake, the M1 Max took 564 seconds with the H.265 encoder, and 187 seconds using the H.265 VideoToolBox encoder. The M1 Ultra was able to beat that score by taking only 395 seconds with H.265, and 120 seconds with VideoToolBox. The Ultra provides a significant bump in performance.

The primary reason for this performance gain is–you guessed it–double the video decoders and encoders in the M1 Ultra. This is a great example of how the boost hardware accelerators affect performance in the real world.

In my testing, I experienced read speeds of 5400MBps and write speeds of 5300 MBps with either SSD. On the Mac Studio M1 Ultra with a 64-core GPU and a 2TB SSD, the SSD posted a similar read speed of 5429MBps, but the write speed improved to 6486MBps.

If you rely on external storage devices, you'll likely find that those devices may not match the speed of the internal storage, even when using Thunderbolt 4 SSDs.

Video editors working with codecs other than ProRes may need the GPU to do most of the heavy lifting. Here are some performance comparisons that involve an export in Final Cut Pro of R3D Raw 4K 120p footage to ProRes 422 HQ.

M1 Max vs M1 Ultra: Do you need double the power?

Apple has included very specific improvements on the M1 Ultra that will highly benefit specific workflows–this will be your key decider in choosing which model is best.

The Mac Studio M1 Ultra can sometimes double the performance of the M1 Max version, depending on your use case. The multi-core gains speak for themselves–the Ultra is the best of the M1 series. If you're heavy into ProRes and video codecs such as H.265, having double the accelerators found in the Ultra will give you great performance gains. If you're a photo editor, the almost identical single-core performance of both models will mean you're better off with the cheaper version in terms of value. If you do need to do heavier photo work, however, the higher RAM limits of the Ultra can come in handy. Again, recognize what your workflow demands, and then pick accordingly.

There is one workflow situation where you might be better off not investing anything just yet. Professionals whose workflows rely heavily on GPU performance will find that the M1 Ultra with either the 48- or 64-core GPU will offer more brute force than the M1 Max. But those users should wait until Apple reveals its Mac Pro with Apple silicon to see how the company will address the GPU demands made by professionals in the field.