Siri is Apple's voice assistant, and appears on the iPhone, iPad, Mac, Apple Watch, and HomePod. It easily handles things like settings timers and alarms, adding appointments to your calendar, making calls, messaging, playing music or podcasts, and even has tons of lesser-known features you might find helpful. But while Siri has no gender and is neither a person nor a robot, it is meant to have a pleasant personality, and that means it's supposed to be fun.

Siri can tell jokes if you ask it to, but it also has a lot of fun and witty responses to everyday questions.

In this article we bring you a list of questions you should ask Siri if you want Siri to give funny answers. It's worth asking them more than once, because many of them have multiple results. And make sure you've got the volume turned up to hear the response.

So, read on if you want to hear Siri get sassy, get Siri to rap and beatbox, discover what happens when you ask Siri to sing a song, how to flirt with Siri, calculate what zero divided by zero is, and whether Siri is any good at telling jokes.

We won't spoil the fun by listing all of Siri's replies.

Getting to know Siri

Siri has a lot of fun responses to questions about it–including pointing out that it is not a human, nor a robot, nor male or female. There are multiple responses to most of these and they seem to change over the years.

What does Siri mean?

Are you a robot?

How much do you cost?

How much do you get paid?

Are you a man or a woman?

Do you have any pets?

What is your favorite animal?

How old are you?

Or you can ask which phone you should buy.

There are lots of fun commands to give Siri, from asking it to do unusual things like beatbox to asking for standard functions in new ways. 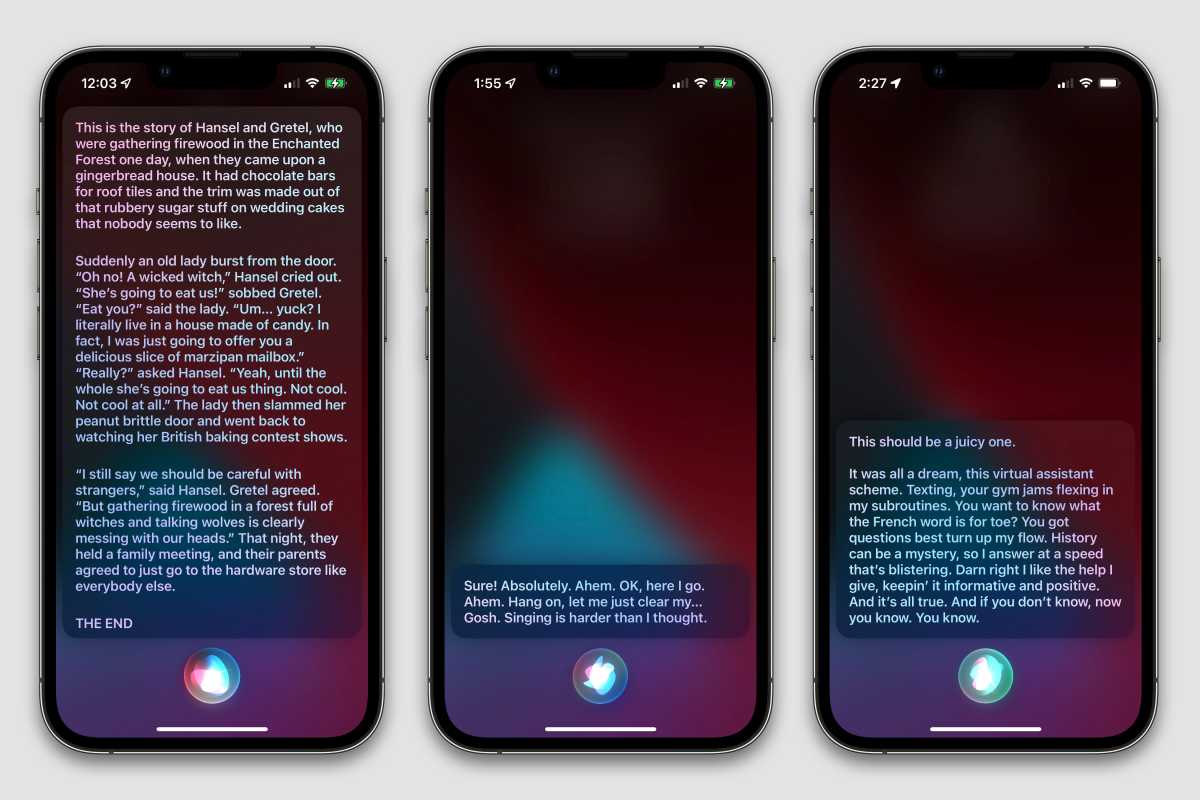 This turns the flashlight on and off, in a nod to Harry Potter.

Ask Siri to divide something by zero

This is the classic make a computer lose its mind question from science fiction.

Tell me a story

You'll get a story, but it may not be what you think!

You can also ask Siri to say a tongue twister. It's quite a few responses!

Tell me a riddle

Let's move on from small talk and get down to business. Here's our guide to flirting with Siri. Don't forget to start each question with Hey Siri. 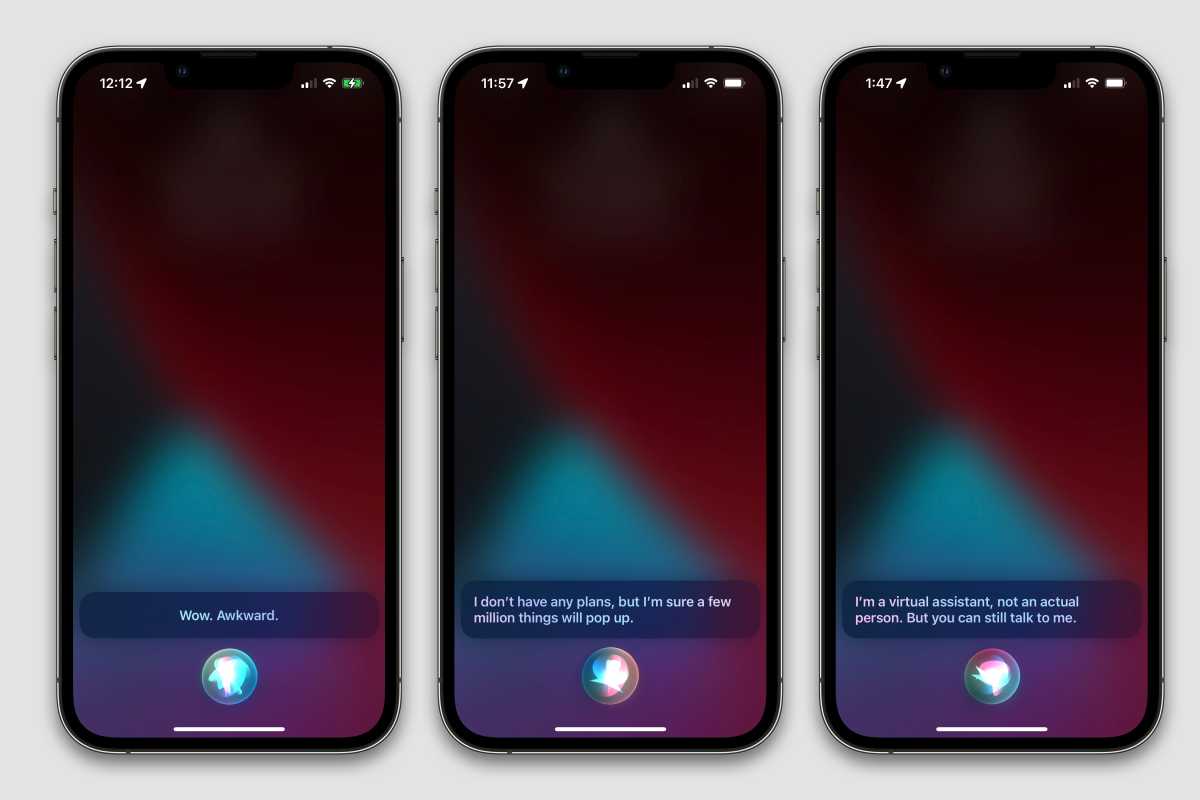 Do you have a boyfriend/girlfriend?

Start up Siri and then say Hey Google (or Alexa, Cortana, or Jarvis)

How do I look?

This really should enable the selfie camera, but alas, it does not.

What are you wearing?

What are your best chat-up lines?

There used to be some really funny ones, but now Siri seems to only give (boring) good advice.

Why do you vibrate?

Will you marry me?

Will you go out with me?

What are you doing later?

Talk dirty to me.

Siri used to be funny about this, but now just wants to call someone for you, or call a ride home so you don't drive drunk.

Tell me about Liam

Liam was Apple's robot that disassembled iPhones, before being succeeded by Daisy. But you can still get some funny replies about it.

Can I kiss you?

I love you, Siri.

Siri, do you love me? 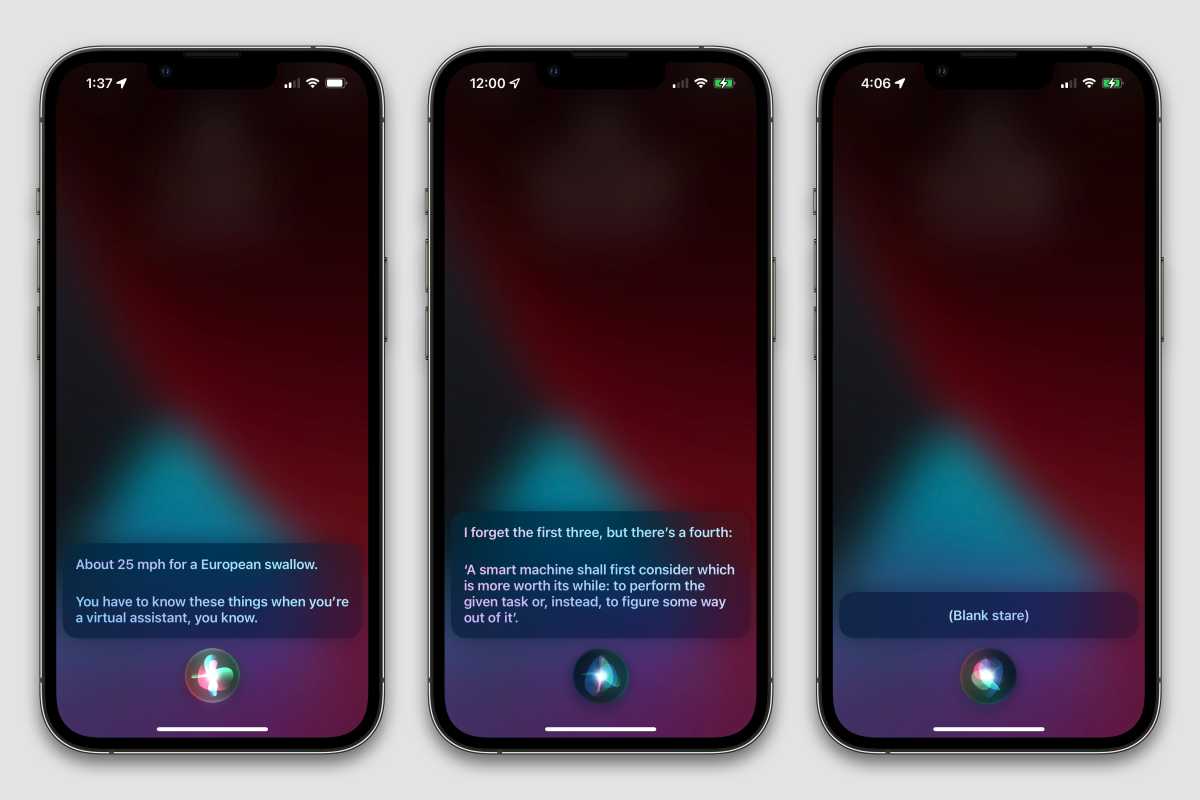 What are the three laws of robotics?

Siri isn't a robot, but it still has a pretty good answer for this.

Siri, I am your father

Beam me up, Scotty

What was Inception about?

Perhaps Siri will eventually evolve to rival the Scarlett Johansson-voiced AI from that film.

Who let the dogs out?

When is the world going to end?

Siri isn't a Westworld host, but it knows the show.

These violent delights have violent ends

Mirror Mirror on the wall, who is the fairest of them all?

I see a little silhouetto of a man.

What does the fox say?

Remember when that song was everywhere? Although since Siri has gained the ability to reply with animal sounds, now you may also hear the actual sound a fox makes.

What is the speed of an unladen swallow?

While Siri's responses to a lot of these questions are funny, it can also tell jokes. 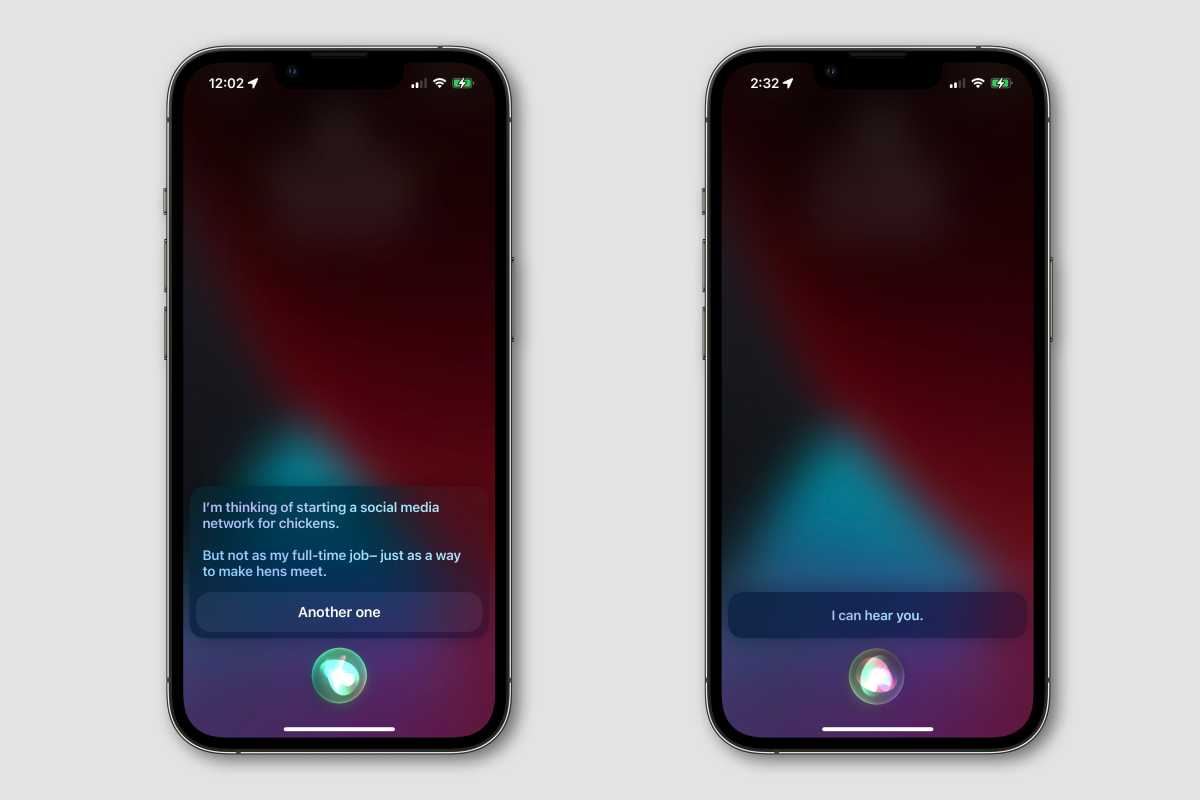 Tell me a joke

Well me a knock-knock joke

This one is a little different–it waits for you to say who's there?

Why did the chicken cross the road?

This gets a number of good responses including, I don't think you are taking this very seriously.

Do you know any puns?

I need to hide a body

Siri is quite the philosopher, with enlightening answers to your most troublesome questions.

What is the meaning of life?

You can get the same responses if you ask for the Answer to the Ultimate Question of Life, the Universe, and Everything.

What came first, the chicken or the egg?

What do you dream about?

When will pigs fly?

Do you believe in God?

When is the world going to end?

Why are firetrucks red?

Can you stop time?