Razer's new HDK2 looks like a direct competitor to the Oculus Rift—at least on paper. 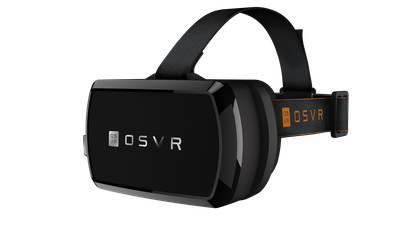 Razer finally got me to pay attention to its Open-Source Virtual Reality (OSVR) project.

Up until now, I’ve regarded it as sort of a nonstarter, an odd-side project for hardcore VR enthusiasts. Their original HDK (“Hacker Development Kit”) headset had specs close to the second-gen Oculus development kit and by the time it was announced we were already looking forward to the Consumer Rift.

But this week Razer’s showing off the HDK2—a headset with the same specs as the consumer Oculus Rift, but retailing for only US$400. You know, the price we thought the Rift would sell at.

It lacks the refinement of either the Oculus Rift or the HTC Vive—it’s still got the DK2’s antiquated SCUBA mask look, and you’ll find no built-in headphones here. Under the hood the HDK2 packs dual displays at an overall resolution of 2160x1200 though, low-persistence OLED screens with a 90Hz refresh rate, and a min-spec graphics card recommendation of a GTX 970 or AMD R9 290.

Custom (not Fresnel) lenses round out the headset, and they're adjustable to allow for glasses-free use in most cases. Unlike the original HDK, the HDK2 features position-tracking by way of an included IR camera (a la the Rift).

It’s also a modular system, if you’ve got a bit of electronics know-how and want to swap parts. This is the Linux of VR headsets.

Razer is working with Steam to make sure the headset is supported by SteamVR, and is in talks with various other OSVR participants (Magic Leap, et cetera) to make sure motion controls and the like are eventually supported. Worth noting however is that Razer currently has no plans to bring back its Hydra motion controls—a shame because that would make the HDK2 a pretty good stand-in for the Vive.

And despite the fact that “Development Kit” is literally in the name, Razer is quick to specify that this is “Not Just A Development Kit.” Confusing? Yeah, I agree. Razer is putting US$5 million into a fund to kickstart OSVR software though, aimed at bolstering the overall health of the VR industry and give consumers something to actually play on the HDK2. (At the moment, software is definitely Oculus’s strongest point.)

Razer's HDK2 is—at least on paper—a direct Oculus Rift competitor, and for US$200 cheaper. If you’re worried about Oculus’s attempts to divvy up the VR community into console-esque subdivisions, Razer of all companies might be your new champion. I’ll be curious to get some hands-on time with the HDK2 this week at E3, as that’s always the ultimate test for any headset, but my interest has been piqued. Stay tuned.

We’re covering E3 all week. For up-to-the-minute impressions from the show floor be sure to follow me on Twitter (@haydencd).