GOG Galaxy 2.0 hands-on: The only game launcher you need? Not yet, but maybe someday 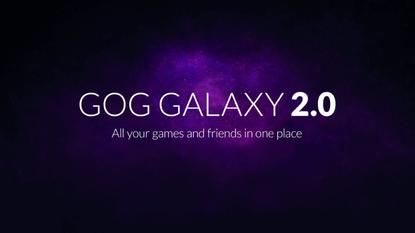 While Valve and Epic battle over storefront supremacy, there’s another battle quietly looming. As complaints mount against the proliferation of storefronts, there’s a chance for someone to make the ur-storefront. I’m talking of course about the launcher that will unify all the other launchers, the one launcher to rule them all and—in the darkness of your hard drive—bind them.

And GOG’s taken an early shot at it. Building off its Galaxy launcher, which was once a mere repository and auto-updater for your GOG library, it’s now begun rolling out “Galaxy 2.0” to a select few, including us. I’ve spent the last week or so testing its capabilities to see if I’m ready to condense my launcher loadout.

The verdict? It’s early days yet, and there are kinks GOG needs to work out—some niche, some broader—but Galaxy 2.0 makes an interesting and attractive bid.

Getting started is easier than I expected, as well. GOG’s not the only launcher to allow games from other services, but usually the implementation is unwieldy. Steam’s “Add a Non-Steam Game” function, for instance, scans every single program on your hard drive and does little except make a Steam-specific shortcut within your game library. Useful, occasionally, but not a great long-term solution.

Galaxy 2.0 is a more automated process. Initially you’ll only see your GOG library, assuming you have one. It works the same as the original Galaxy launcher in that regard.

But you’re prompted to “Add Games and Friends” as well. Some of these potential third-party connections are official, created and supported by GOG, though at the moment that list only includes Xbox Live, and even that doesn’t actually allow you to access your Xbox Play Anywhere games yet.

The bulk of Galaxy 2.0’s connections have been built by the community using GOG’s SDK to implement the appropriate hooks, and already there’s a thriving plugin aftermarket, presented within Galaxy 2.0 as “Community Integrations – Popular.” Steam, Battle.net, Epic Games Store, Uplay, Origin, and more can be added through these pseudo-official channels. It’s everything you’d want, or at least everything you’re “forced” to use when you can’t use Steam. Yes, I see you.

Login takes seconds, each provider asking for your credentials individually. Once Galaxy 2.0 is authorized you’ll see a note at the bottom that says your library is “Importing,” though even with a Steam library in the thousands this took a minute or two at most. And then you’re done, free to peruse any and all of your games through GOG, to sort them alphabetically in one long list or split them up by storefront, and easily launch the one you want.

They’re more than mere shortcuts. That’s what impresses me most about Galaxy 2.0 so far. Games you’ve purchased from other services aren’t treated like second-class citizens, as the aforementioned “Non-Steam Games” are.

No, Galaxy 2.0 pulls in your history with these games—Steam’s “Hours Played” metric, achievement data, and so on. It’s a rich resource in that regard, preserving important info even if you opt to use Galaxy 2.0 as your primary launcher.

It also shines a light on some of Steam’s shortcomings, in my opinion. Steam is useful. Steam has a lot of great functionality. Steam is also fairly dated, and could use a full-scale redesign. One’s reputedly in the works, sure, but that’s been the case for years now, with no indication when it’ll release.

Along comes Galaxy 2.0, which does stuff with my Steam library that seems obvious in retrospect, but genius in the moment. For instance, allowing me to sort by achievement percentage—of course!—and by time played. Valve’s tracking these metrics, but even if you use the more detailed (and less functional) list view in Steam you can’t sort by these. It’s nifty.

And I’m fast becoming a fan of Galaxy 2.0’s star ratings as well. They both serve as a way to quickly find my favorite games and mark which ones I’ve finished. Best of all, they withstand moving from PC to PC. I’ve installed Galaxy 2.0 on two different computers, gone through the setup on each, and can confirm star ratings for the Epic Games Store persisted across both. In fact, your entire cumulative, launcher-spanning library is forever attached to your GOG account, even though you have to reauthorize your third-party credentials on subsequent PCs.

That said, there’s more to be done. With GOG mostly relying on the community to develop its Integrations so far, support for any and all features can be a bit spotty. For instance, my Steam library display time played but (at least when I tested) all achievement data is listed at zero percent.

You can also add tags within GOG, but it won’t pull tags directly from Steam—a pain for me, given my meticulously cataloged and sorted Steam library. That alone has made me less likely to move over, as I don’t want to duplicate more than a decade’s worth of tedious filing work all in one go.

There’s also a minor irritation, in that Galaxy 2.0 can call up other launchers as needed( you still need Uplay running to play Uplay games, for instance) but it won’t close them after it’s done yet. This feature’s listed in the settings menu with a “Coming soon” tooltip, and for obvious reasons. Galaxy 2.0 wants to be a seamless environment, and having to close out other launchers manually breaks that illusion.

But worst of all, for me at least—and I admit this might be niche—is that Galaxy 2.0 doesn’t support Steam’s Family Sharing feature yet, nor can you add more than one account from the same service. It won’t list Family Share games even if they’re installed, which is doubly frustrating. As I said it’s most likely a niche case, but I make extensive use of Steam’s Family Sharing features and this alone is preventing it from being my go-to, given that my games are very much not all in one place.

For its part, GOG reiterates that this is a closed beta, little more than a proof-of-concept that’s evolving by the day, and that’s true. Since I started testing, there’s already been an updated release with some bug fixes and other minor improvements. I’m sympathetic, and am willing to overlook its flaws for the most part and focus on the bigger picture.

And bigger picture? I think it’s a neat idea. I don’t necessarily know if GOG’s going to be the one to come out on top in this upcoming battle, but Galaxy 2.0 is one possible solution to a growing problem and I’ll be curious whether others try and follow suit—or whether we keep juggling an ever-increasing number of launchers on our own and try to make do. Either seems possible.