Utilities to hide the notch and round the corners of the new MacBook Pro's screen. The new 14- and 16-inch MacBook Pro has a new feature that everyone is talking about. No, it's not the blazing processor speed, it's the notch at the top of the display. Some people don't like how it looks, even though it doesn't take away from the workable space of the screen.

Apple has a solution if you use an app in full-screen mode. But when you're not, the menu bar often is another color other than black and the notch stands out. For some, its mere presence feels like a poke in the eye, another example of Apple doing something innovative that they don't agree with and they just have to sit there and take it. (I actually don't feel that way. The notch doesn't bother me. But according to social media, many of you CAN'T STAND IT! ARGH!)

But you don't have to just sit there, you can do something about it, thanks to the software community. A few developers have already made utilities that black out the menu bar, effectively hiding that god-forsaken notch. Here's a look at some of those menu bar utilities.

From MakeTheWeb, makers of the CleanShot screen capture app, Top Notch (free) can be set to launch at startup and it appears as a menu bar icon. It's a pretty basic utility with just the essential set of features: turn on/off the black menu bar, activate rounded screen corners, and whether the app should work with dynamic wallpapers (the ones that change colors based on the time). 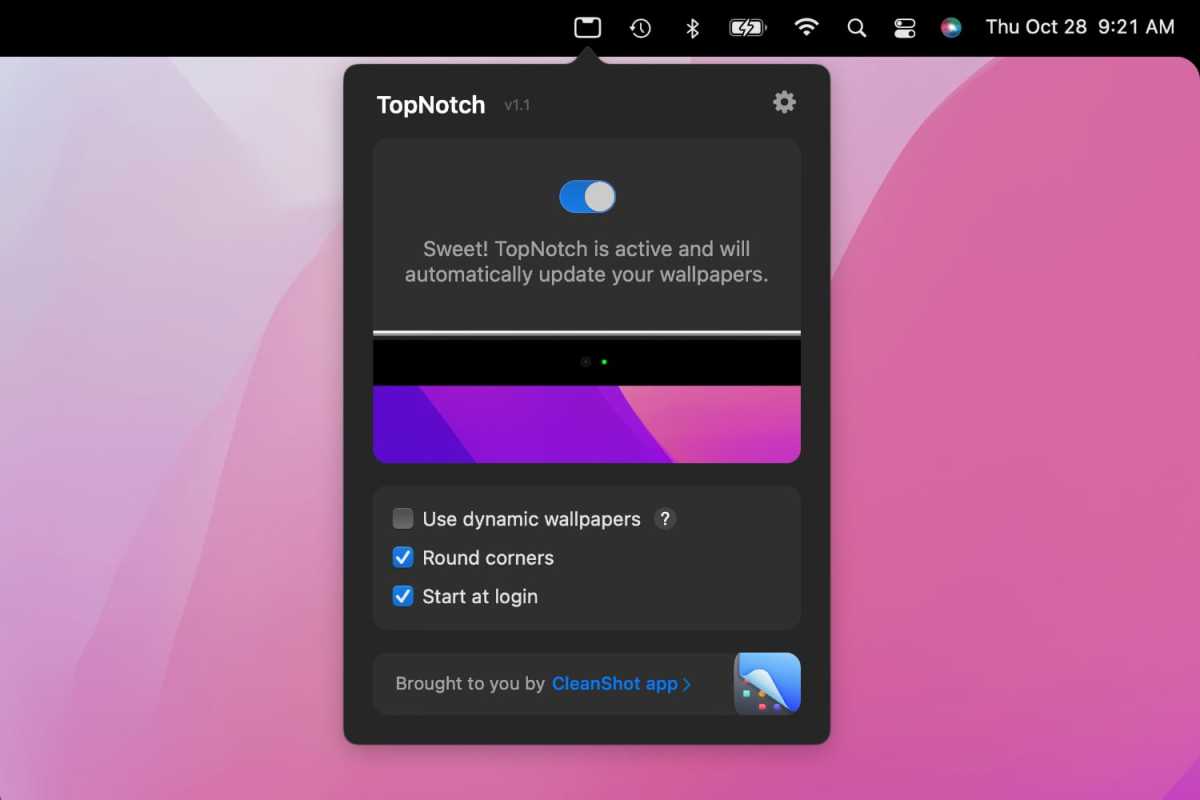 Top Notch is a basic app but it's free. Image: IDG

Developer Jordi Bruin likes the notch. He's also sympathetic to those who don't share his feelings, so he wrote Forehead (you set the fee you want to pay the developer). It has a basic feature set, but if you want to go to the extreme with the rounded corners, you can really do so with Forehead by using its slider to go from no rounded corners to a corner radius of 100. 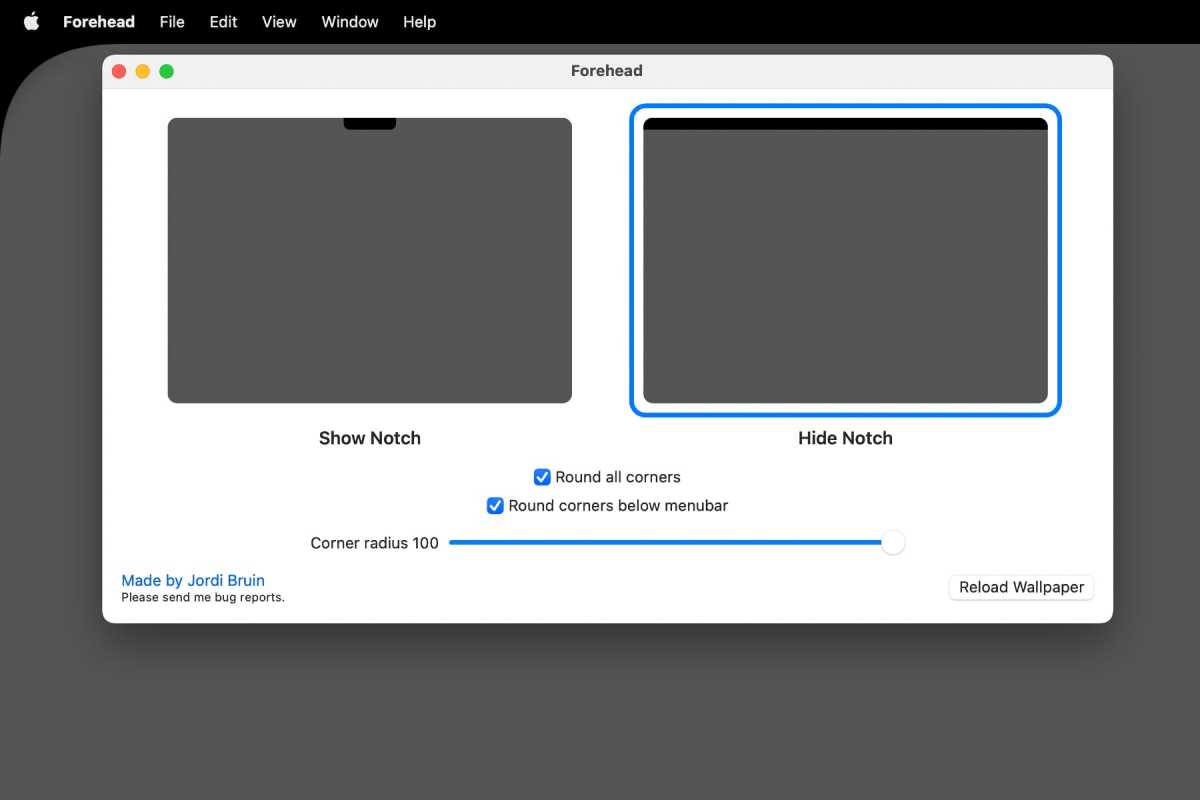 While Top Notch and Forehead are pretty basic tools, De-Notch-ifier is chock full of customization options. Here are some of the settings you can adjust: 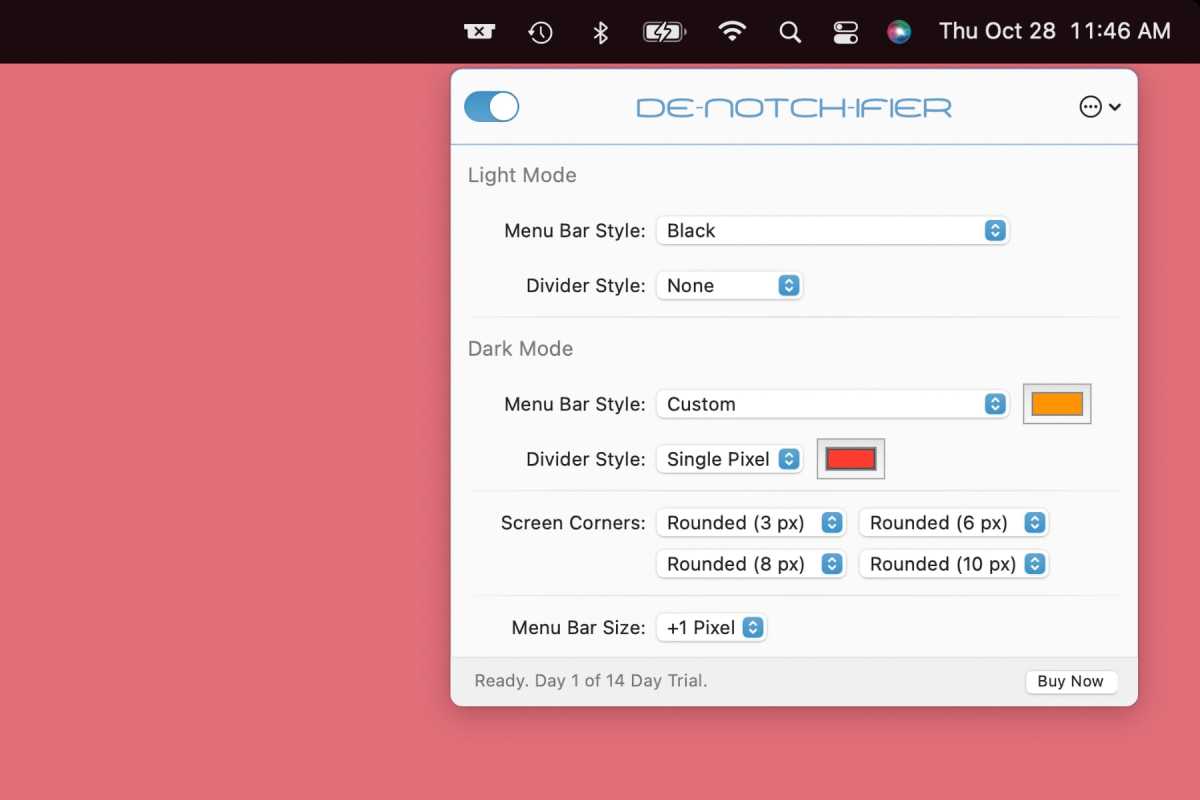 For $10, you get a lot of customization options.