Setting the tone for the future CES 2022 is typically the single most important media event for the PC laptop industry. This year proved no different despite the sudden and unexpected shift from to a largely virtually show (The major chip makers all stayed remote, as did most laptop manufacturers).

In fact, 2022 is shaping up to be an excellent year for Windows laptops. New CPUs and GPUs from AMD, Nvidia, and Intel promise to send laptop performance to the moon – and that's just the start.

Here's 5 top laptop trends from CES 2022 that simply can't be ignored. Expect to see some of these notebooks cracking our list of the best laptops sooner than later.

The PC laptop world was focused on large, heavy, and expensive laptops at CES 2022. While AMD, Intel, and Nvidia continue to make silicon focused on thin-and-light systems, the most exciting announcements remain in the realm of high-power, high-performance mobile computing. Even the best thin-and-lights, like the Dell XPS 13 Plus and Lenovo ThinkPad Z, are appealing because they attempt to stuff ever-faster hardware into modest footprints (whether they're successful remains to be seen).

Intel's 12th-gen Core processors list a base power as low as nine watts. The maximum potential thermal design power ranges from 29 watts on the U-Series to 115 watts for the quickest H-Series processors, however. For comparison, Intel's popular 8th-gen Core Mobile processors, such as the Core i5-8250U and Core i7-8550U, had a maximum listed thermal design power of 25 watts. This increase in wattage is excused by big leaps in core counts, with flagship 12th-gen Core processors packing up to a whopping 20 cores. 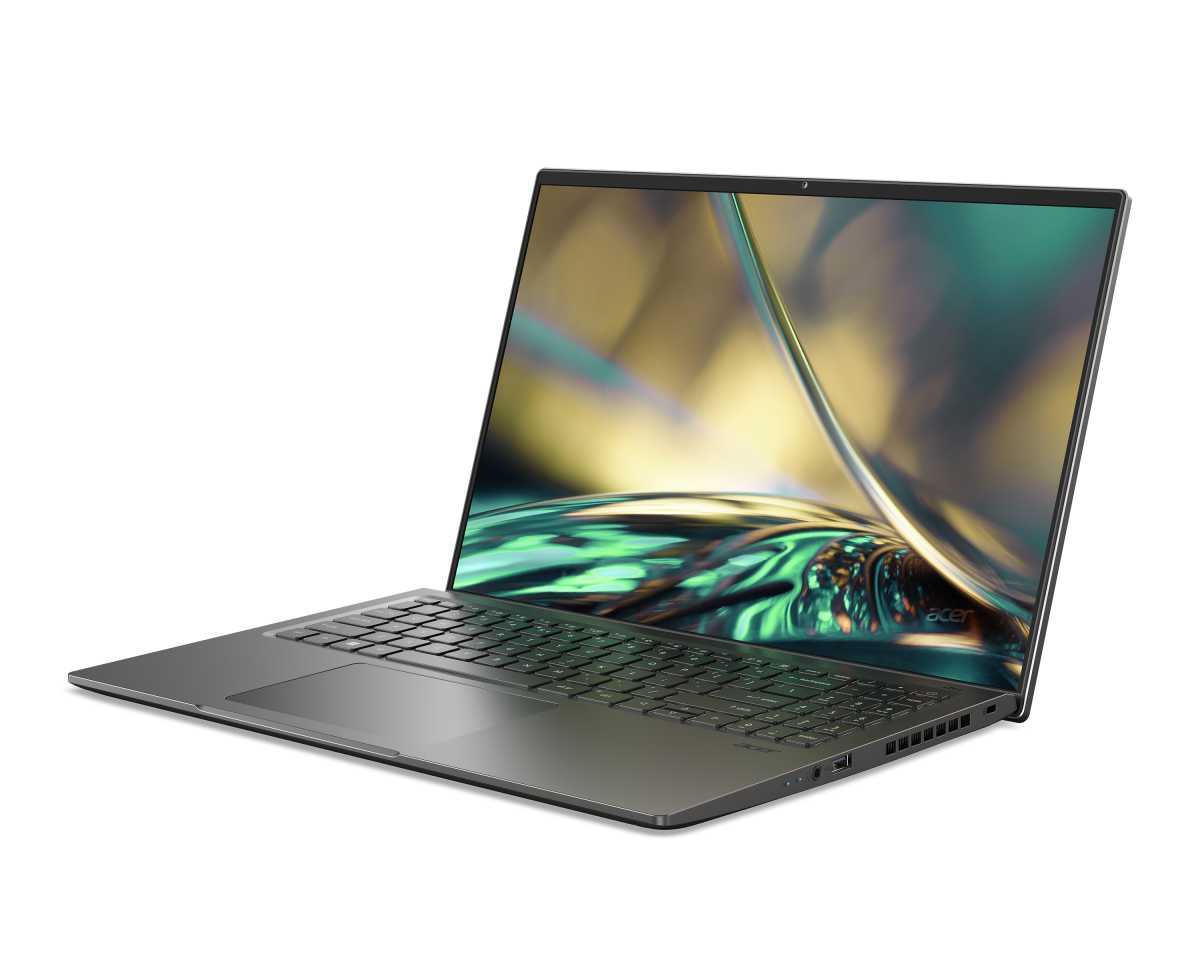 Acer's 16-inch Swift X is powerful for its size, but I wouldn't call it portable.

The trend continues in discrete graphics. AMD and Nvidia both announced faster discrete laptop options for graphics, such as the AMD Radeon 6850M XT and Nvidia GeForce RTX 3080 Ti. These offer the best mobile performance yet from each company, but also target a slightly higher maximum design power than their predecessors.

More power consumption can hurt portability, but it has an upside. The focus on powerful laptops means 2022 is a great time to buy if you want a reasonably priced machine with great multi-core CPU performance and respectable discrete graphics. The Acer Swift X, Lenovo ThinkBook Plus, and entry-level Razer Blade all look set to strong results at a mid-range price. For most people, these laptops should be quick enough to replace a gaming or workstation desktop with no noticeable downside. Well, aside from howling system fans.

Faster integrated graphics is a win for budget laptops

Performance laptops took the spotlight at CES 2022, but there was good news for those who want a budget laptop or a speedy thing-and-light. AMD and Intel announced new integrated graphics (IGP) options that provide the biggest year-over-year performance gain since the release of the first Ryzen APUs.

AMD's Ryzen 6000 mobile APUs score a win by shifting the IGP to the RDNA 2 architecture found in recent AMD discrete graphics cards. It claims a two-fold performance improvement compared to Ryzen 5000 APUs, which already delivered great gaming results. This gain will make a bulk of modern games playable at 1080p resolution and 30 frames per second, with many playable at 60 FPS. 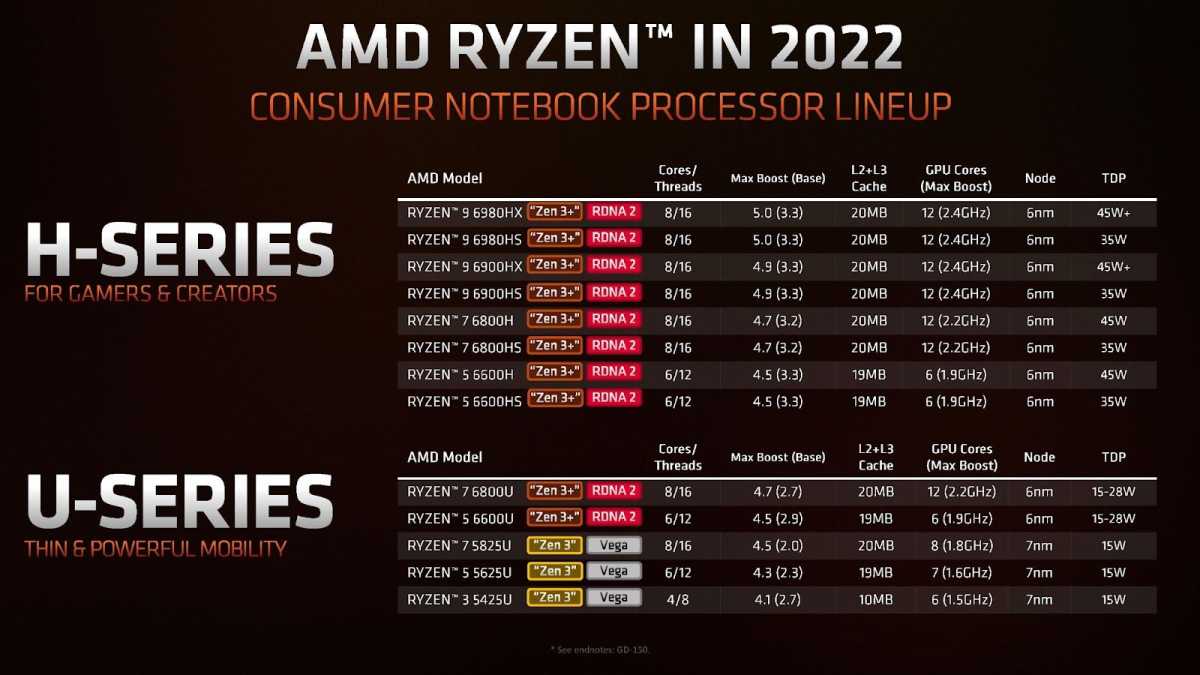 The IGP also supports AMD's FidelityFX Super Resolution, which can upscale games from a lower render resolution to further improve performance. With this feature on, AMD says the best Ryzen 6000 processors can average 59 FPS in Far Cry 6 at medium detail and 1080p resolution. That's very impressive for integrated graphics.

Both wired and wireless connectivity get an upgrade

There's more to a laptop than CPU and GPU performance. Connectivity and Wi-Fi performance often just as important to your day-to-day experience – and there's big upgrades landing in 2022.

AMD and Intel's mobile hardware will support Wi-Fi 6E, the latest Wi-Fi standard. It opens a new 6GHz wireless band. I've tested Wi-Fi 6E routers and can vouch for their speed. They effectively render Gigabit Ethernet obsolete for most homes, as Wi-Fi 6E can reliably offer speeds of 800Mbps or higher in real-world conditions.

The speeds were a bit of a moot point at the time, because laptops sold in 2021 did not support Wi-Fi 6E. That will change rapidly through 2022. It's not a must-have feature for most, but people with access to Gigabit should seriously consider an upgrade to a Wi-Fi 6E.

It's ok to be a bit weird 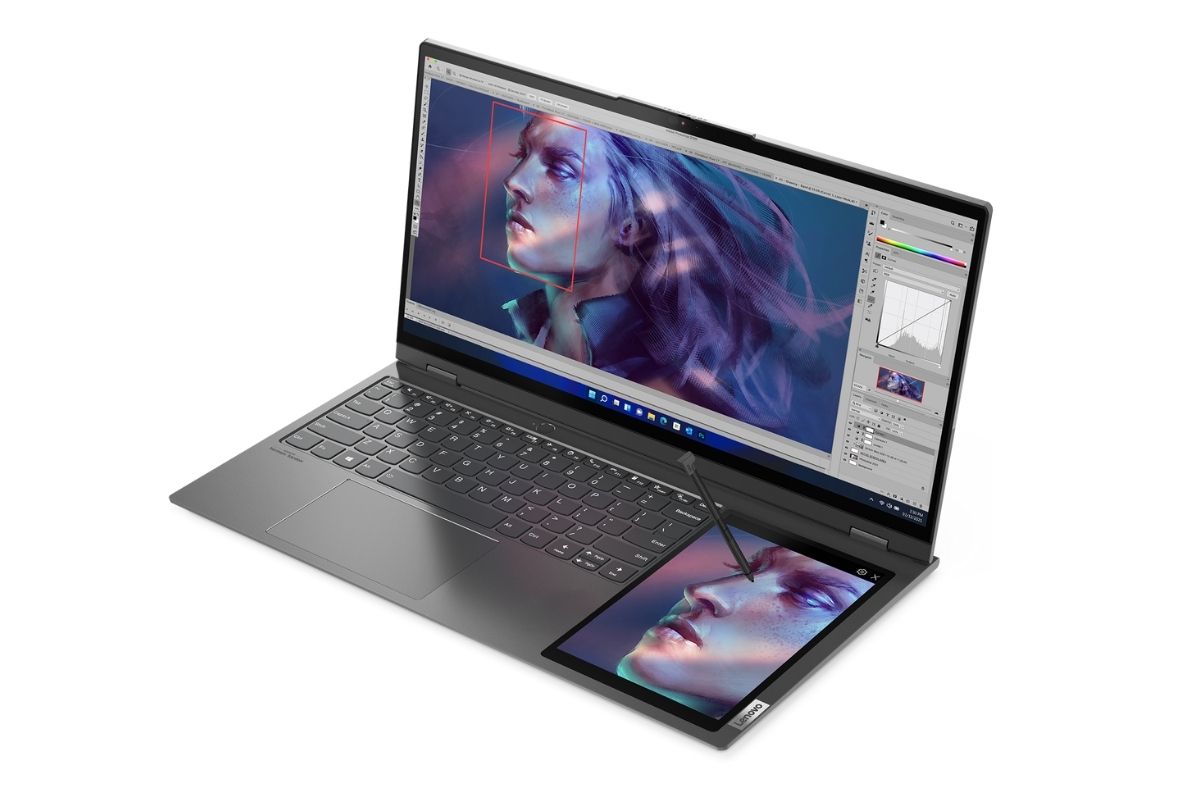 The Lenovo ThinkBook Plus Gen 3 trades the numpad for a touchscreen.

The lack of progress in thin-and-light laptop design has forced laptop manufacturers to search for new ways to distinguish themselves. Trying to beat the competition with a thinner, lighter system often isn't practical and may even be harmful if it requires a cut to performance.

That means PC makers must get creative. Dell's radical XPS 13 Plus has an island-style keyboard and replaces the function row with touch-sensitive buttons. Numerous multi-screen laptops are available, including a new Lenovo ThinkBook Plus that replaces the numpad with an eight-inch touchscreen. Lenovo's ThinkPad Z and Dell's XPS 13 Plus also have haptic touchpads, an unusual feature for a Windows laptop. Asus brought a new high-end folding laptop that targets creators. 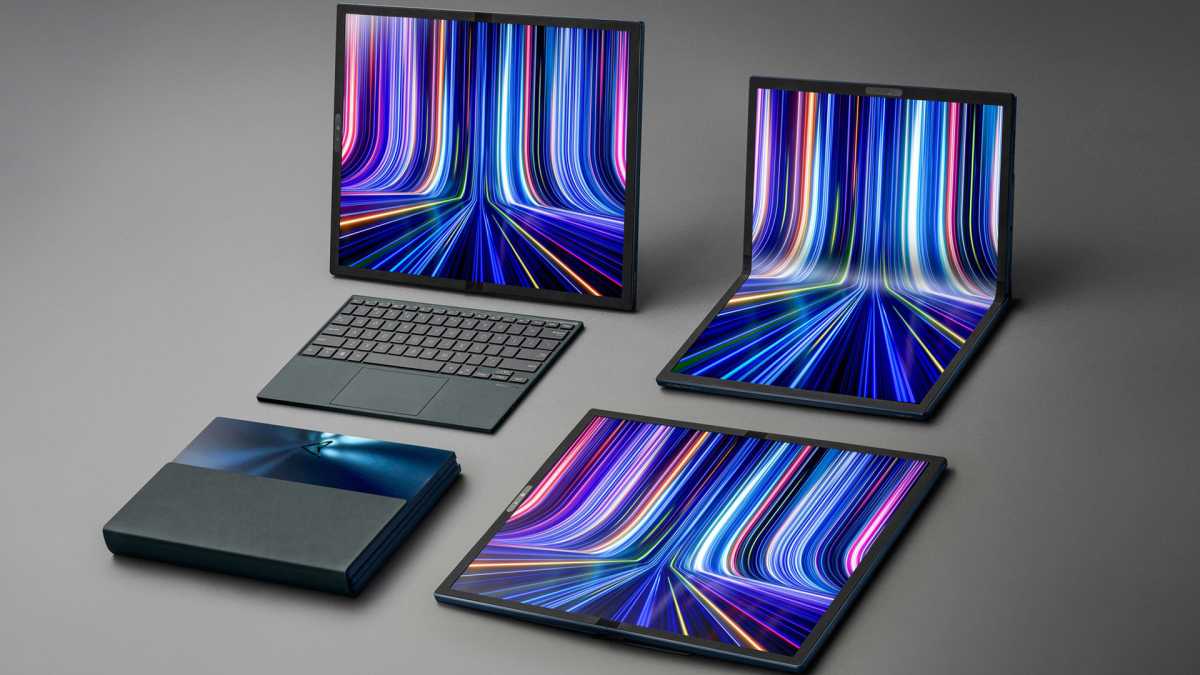 Mid-range laptops are beginning to diverge as well. Acer's Swift X, Lenovo's Yoga 7i, and Dell's Inspiron 7000 series are mid-range laptops with distinct perks. Acer's Swift X has RTX graphics, Lenovo's Yoga 7i is the only 2-in-1, and Dell's Inspiron 7000 brings substantial connectivity with affordable high-end storage and RAM configurations. The laptops have their own style as each company moves to unusual materials and bold colors.

Most laptop trends at CES 2022 are positive, and doubly so if you care about performance. If you want multi-day battery life, however, I don't think the industry is heading in the right direction.

In part, this circles back around to the first trend: big, fast laptops that consume a lot of power.

AMD, Intel, and Nvidia combat this with optimization. Intel's 12th-gen Core processors pair less performant, lower-power E-cores with quicker P-cores and aim to minimize use of the latter when they're not needed. Nvidia stresses a similar approach in its GPUs, which can selectively maximize the clock of some GPU cores while leaving others unused. And AMD made a vague boast about 50 new power management features that can enable up to 24 hours of battery life. 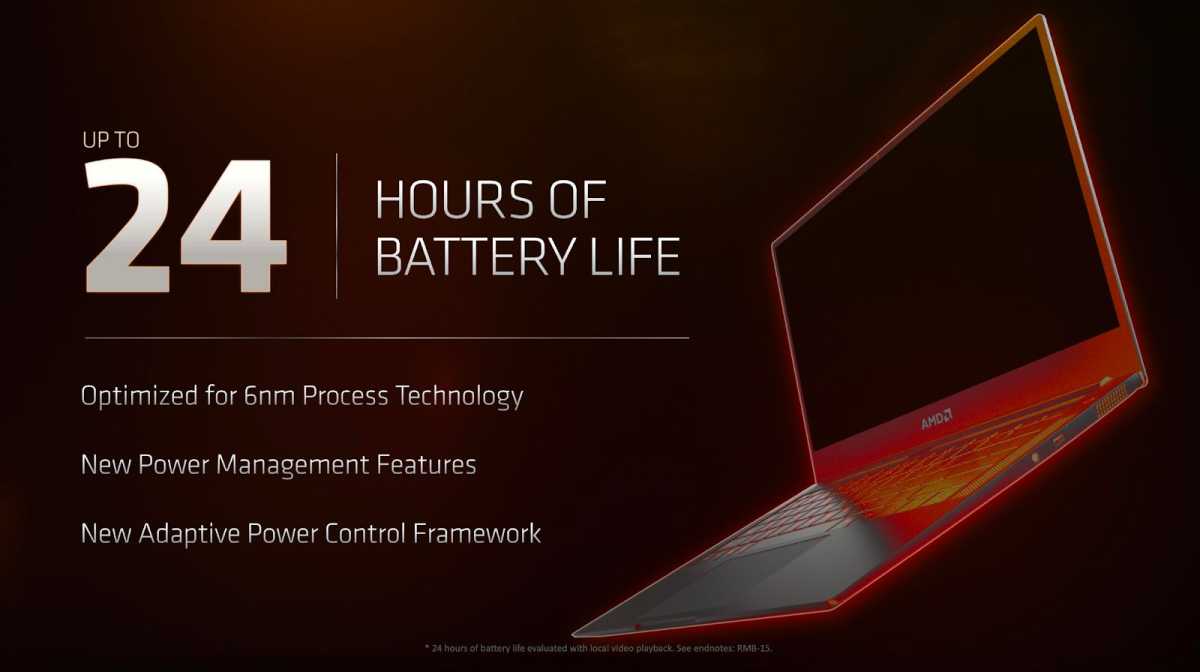 Is it possible to hit 24 hours of battery life? Yes. Will you see it happen? No.

Hold up. 24 hours of battery life? In real laptops? Well…no.

AMD did test an unspecified reference laptop under conditions that returned the result AMD claims. It's a true statement. However, you can't buy an AMD reference laptop, and the use case is a specific video playback test that's not representative of real use. The claim that laptops with Ryzen 6000 APUs can hit 24 hours of battery life does not mean AMD laptop buyers will see 24 hours of battery life (or anything close to it) in daily use.

Intel, to its credit, did not participate in this charade at CES 2022. The press deck for Intel 12th-gen Core processors does not make specific battery life claims, and laptop manufacturers have largely followed Intel's lead. I suspect this means the battery life of the 12th-gen Core mobile is unimpressive, but at least it won't lead naïve shoppers to expect multi-day endurance.

On balance, CES 2022 was unquestionably positive for PC laptops despite the ongoing pressures of high chip prices and Apple's competitive M1-powered MacBooks. The laptops shown at CES should deliver impressive performance, highly competitive pricing, and unmatched versatility. There's no question that PC laptops remain the top choice if you want one computer for work and play.