Acer Swift 3 review: A big screen on a modest budget

The Swift 3 is the perfect laptop for writers and students 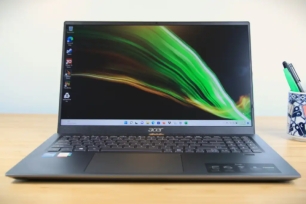 The Acer Swift 3 isn't perfect, but its affordable price and big screen will appeal to anyone who needs to multitask on a laptop.

Big laptops are back in style. Once all but abandoned, 16 and 17-inch laptops are once again widely available. Most models are expensive, however, and that's especially true of 16-inch machines.

Enter the Acer Swift 3 SF316-51. This mainstream 16-inch laptop has plenty of display real estate and a slim profile yet carries a mid-range retail price of US$959.99 (AU$1,280). Online retailers have sold it for as little as US$849. That's an alluring price for a large, capable laptop, but there's a catch. Battery life is less than stellar and performance falls behind when it comes to more demanding apps. If you can live with those trade-offs, the Swift 3 has a big screen and is priced reasonably.

Acer also has a variant with an Intel Core i5-11300H processor, 8GB of RAM, and a 512GB solid state drive, but it's currently sold only through Acer's online store and Costco. The laptop I reviewed will score better in processor benchmarks but aside from that and reduced RAM in the entry-level version, the two models are very similar. 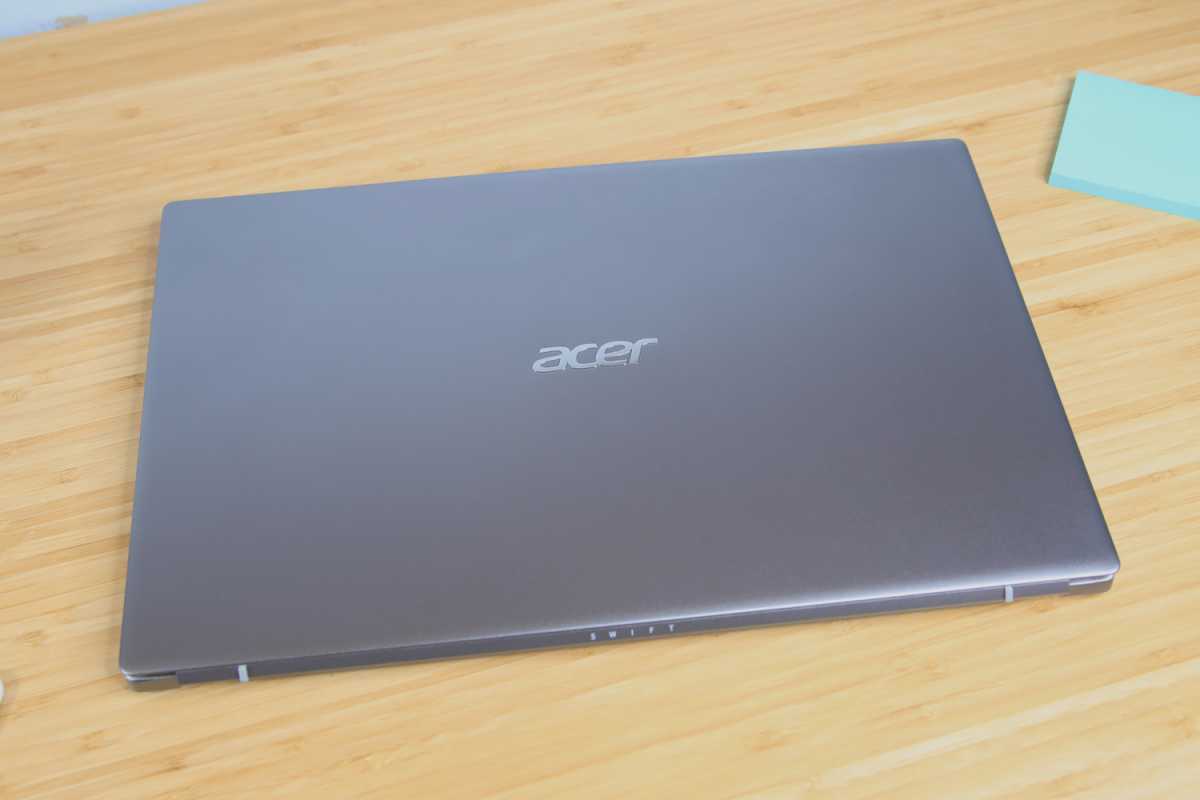 The Acer Swift 3, like so many of Acer's laptops, has a generic look that seems ordered by the pound. However, this laptop's mid-range price point is obvious when compared to Acer's budget Aspire series. Upgrading to the Swift provides a more attractive metallic chassis with a luxurious gunmetal hue.

My only aesthetic complaint concerns are the key caps, which are darker and lack the sparkle of the surrounding material. This cheapens the look of the laptop. Keyboard backlighting is standard but more functional than attractive, as significant light escapes around the edges of each key.

Build quality is good. A bit of flex is obvious when handling the laptop roughly and moving the display, but it's minor and not distracting in day-to-day use. The Swift 3 feels tightly constructed and has a notable edge over Asus' Vivobook line and lower-end Dell Inspiron laptops.

The Swift 3 weighs in at only 3.86 pounds. That's lighter than most 15 and 16-inch laptops, including premium models like the MacBook Pro 16 and Dell XPS 15. It's just .63 inches thick, which is a tad thinner than LG's Gram 16. However, the Acer weighs about a pound more than the lightweight LG. 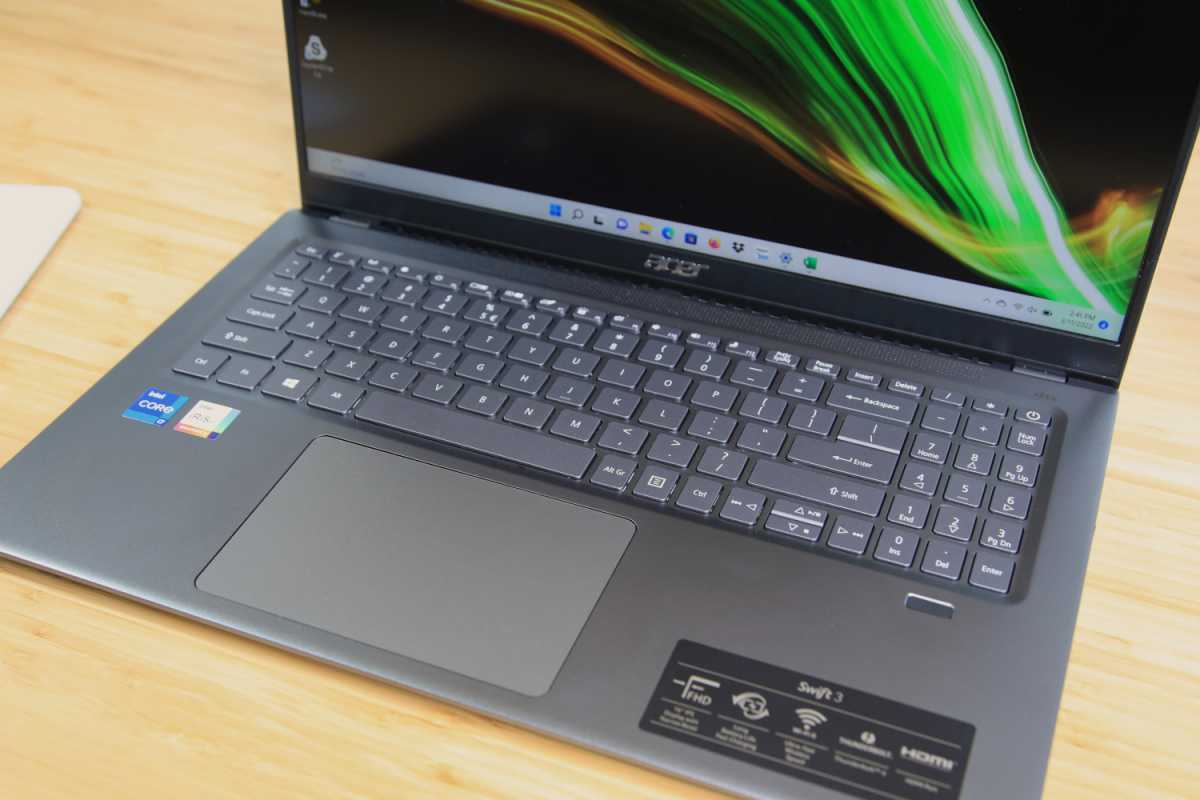 The Acer Swift 3 has a comfortable keyboard with good key travel and feel. The 16-inch display provides room for a spacious and conventional layout, and the chunky palmrest means users with large hands are less likely to find their palms dangling in the air.

There's so much space, in fact, that Acer crams in a numpad. The numpad pushes the rest of the keyboard to the left, which can add mistakes when touch-typing and feels uncomfortable when frequently using the touchpad. If you need the numpad, however, you'll appreciate its inclusion.

Acer uses the large palmrest to provide a large touchpad with plenty of room for use of WIndows' more elaborate multi-touch gestures. The touchpad's surface does not feel luxurious but ]much smoother than the surrounding material, which makes it easy to find while typing.

The 16-inch display might seem disappointing at first. It makes do with 1080p resolution and lacks the features you'll find in more expensive competitors. It's a simple, edge-lit LCD with a 60Hz refresh rate. Don't let that fool you. The display is great. It offers depth and rich, lifelike color.

Loading the teaser trailer for the latest Star Wars show, Obi-Wan, gave the display a chance to show off. The relatively solid contrast ratio of 1440:1 provides dimension and detail in darker scenes, while the display's accurate color properly displays the dusty, choking beige of Tatoonie's endless desert.

Does it beat a MacBook Pro 16 or XPS 15 with OLED? Of course not. Still, the Swift 3 is impressive for its price.

The Swift 3's maximum brightness is just 317 nits, which is not high enough for comfortable viewing outdoors. The matte coating minimizes glare, however, so room lighting won't easily drown out the display.

Audio is provided by speakers positioned above the keyboard and on the laptop's front edge. They provide a full, rich sound with some hint of bass, but lack the clarity to make podcasts or dialogue-heavy shows pleasing. You'll want headphones or external speakers for serious listening.

A basic 720p webcam hides in the Swift 3's slim upper display bezel and does nothing to fix the usual issues that haunt entry-level laptop cameras. Video looks noisy in even moderate lighting.

Microphone quality is fine. It had no problem picking up my voice from up to six feet away. Ambient noise is not well handled, however, so any background noise you can easily notice is likely to come through.

A fingerprint reader is included and supports biometric login through Windows Hello. It's reliable in ideal conditions but can be tripped up by a slightly off-angle position or a bit of grime. 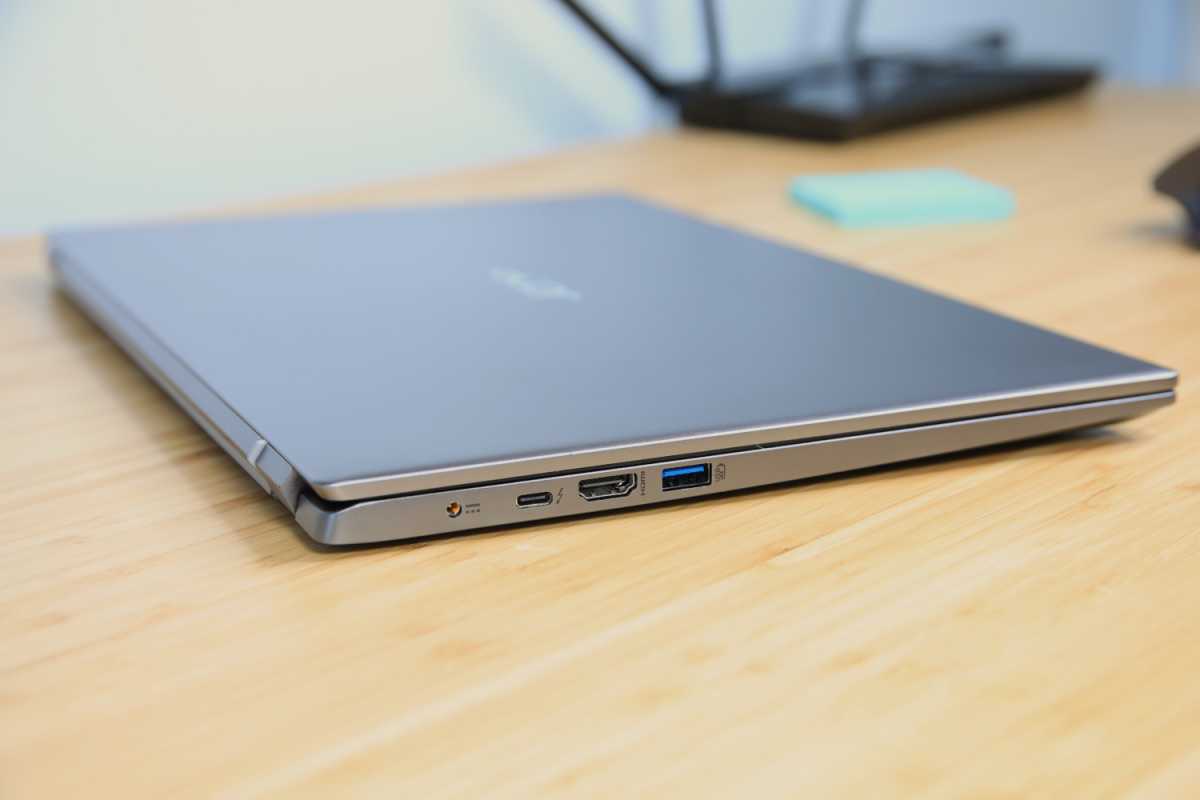 A USB-C port with Thunderbolt 4, DisplayPort Alternate Mode, and up to 65 watts of Power Delivery (enough to charge the laptop) can be found on the Swift 3's left flank. It's a nice perk for a laptop in this price range. You can use it to connect a display, charge the laptop, or quickly transfer data to solid state external storage.

USB-C is paired with two USB-A 3.2 Gen 1 ports, one on each side of the laptop. A full-sized HDMI port and a combo audio jack round out the wired connectivity. Yes, that means Ethernet is missing, though you can still use Ethernet through a USB-C hub.

While it can charge over USB-C, Acer ships the Swift 3 with a small 65-watt power brick with a barrel plug. I would prefer a USB-C charger, but the one provided is small and light.

Wi-Fi 6 and Bluetooth 5.0 are provided by an Intel AX201 wireless adapter, a common part found in many laptops. It provides excellent performance here, reaching speeds of over 600Mbps when in the same room as a Wi-Fi 6 router. Speeds were generally between 200 and 100Mbps in other rooms. Bluetooth connectivity was also reliable and maintained a connection to Bluetooth headphones up to 30 feet away.

Intel's Core i7-11370H powered the Acer Swift 3 I received for review and it's a rather odd duck.

Put simply, the i7-11370H is designed to use more power in demanding workloads and this delivers an improvement in performance.

The Intel processor is supported by 16GB of RAM and a 512GB solid state drive. These specifications are not uncommon for this price but good value. Most 16-inch laptops with similar hardware are several hundred dollars more expensive.

Let's get into the benchmarks. 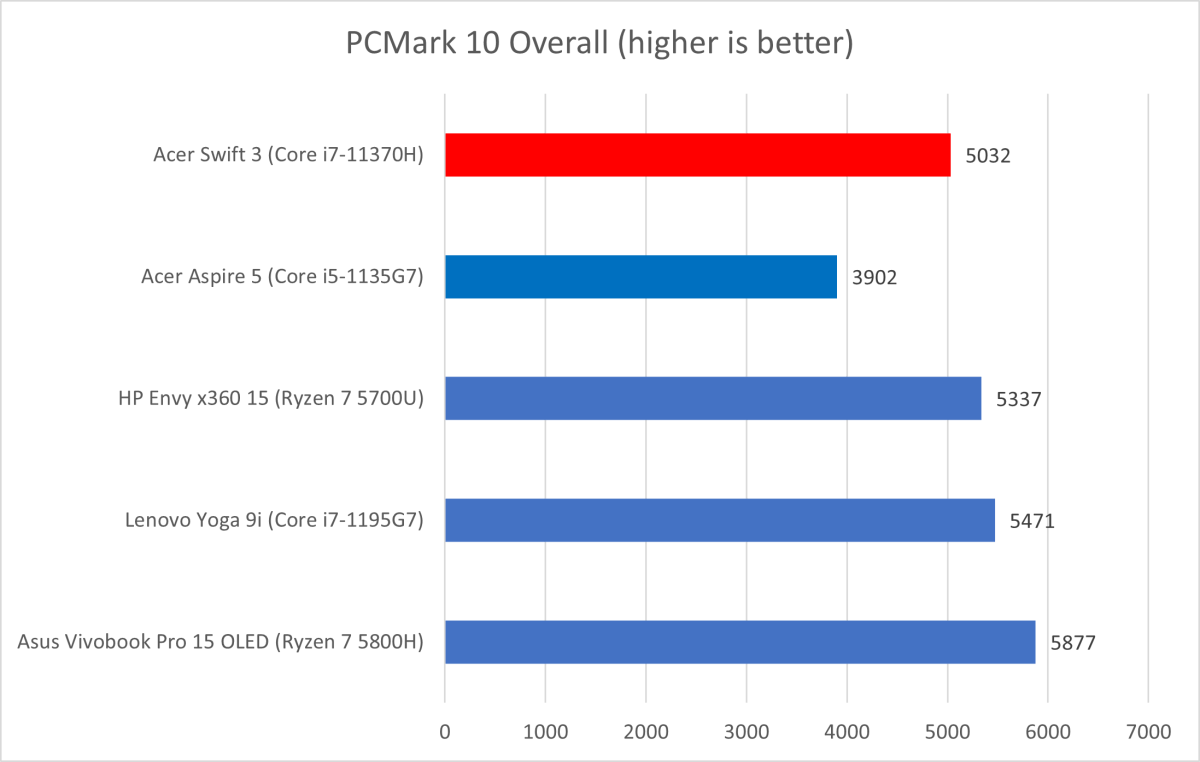 The Swift 3 starts off with a decent PCMark 10 score of 5,032, which is much better than the Acer Aspire 5's Intel Core i5-1135G7 processor. That's worth remembering, as the Core i5-1135G7 is found in many similarly priced laptops.

Unsurprisingly, the AMD Ryzen 7 5700U is a more serious contender. It has twice the core count and is able to squeak out a notable victory over the Swift 3's i7-11370H. Intel is not far behind, but this is a win for AMD powered laptops. 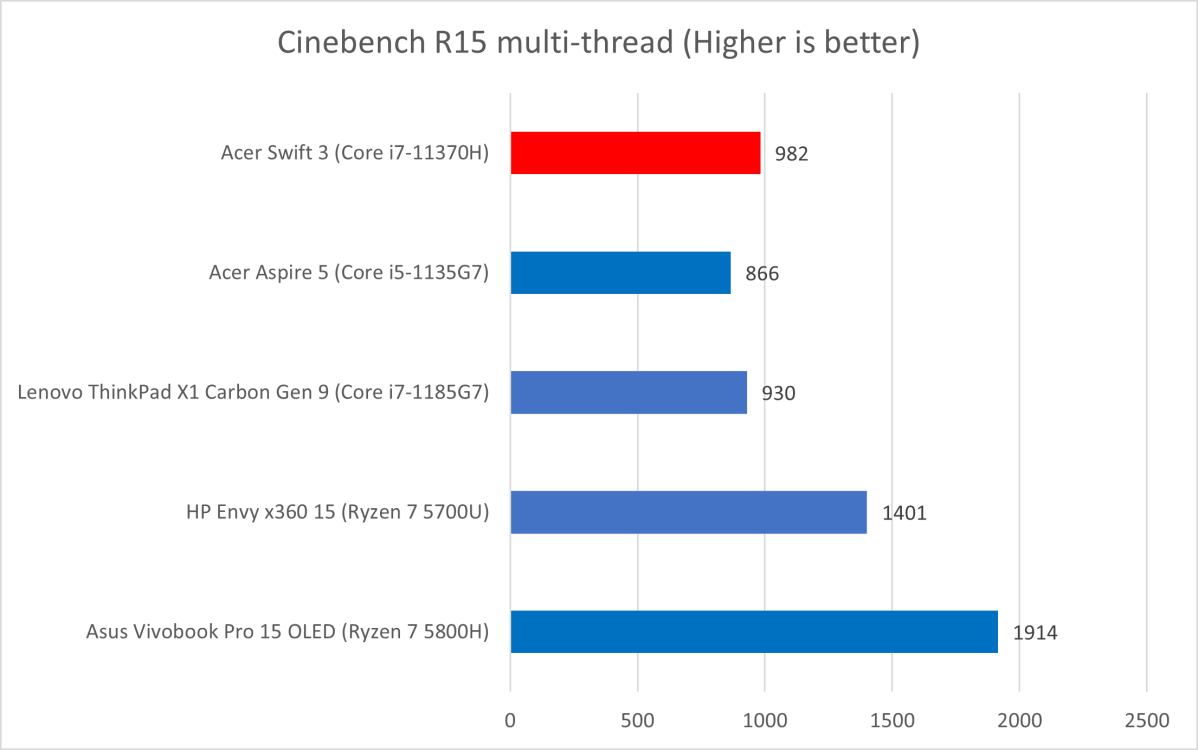 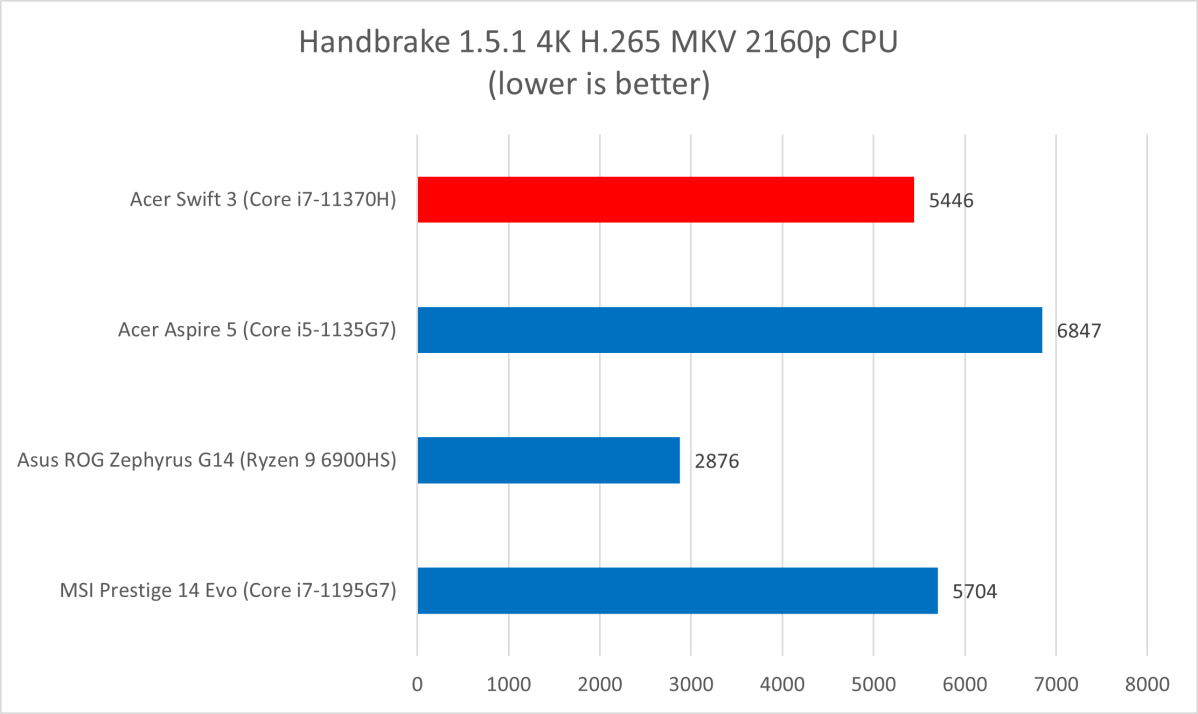 A 4K MKV encoding run of the short film Tears of Steel delivers no surprises. Handbrake shows the Core i7-11370H improving on its less power-hungry siblings, but AMD is once again far in the lead thanks to its higher core count. 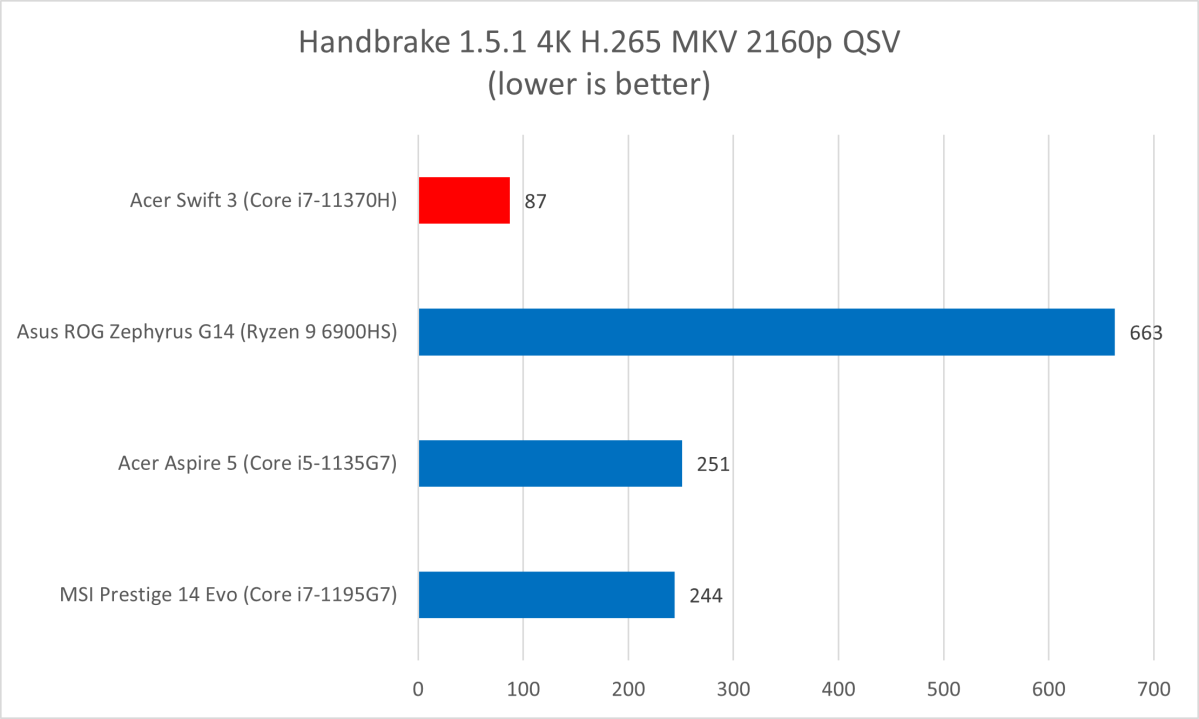 However, Intel has an ace up its sleeve â€“ Quick Sync Video. This massively improves encoding times in apps that support it. AMD's answer to Intel is its own Video Encoding Engine, which also greatly improves performance. Still, Intel's QSV takes an easy win here. Swift 3 owners will definitely want to use QSV when video encoding performance is a priority. 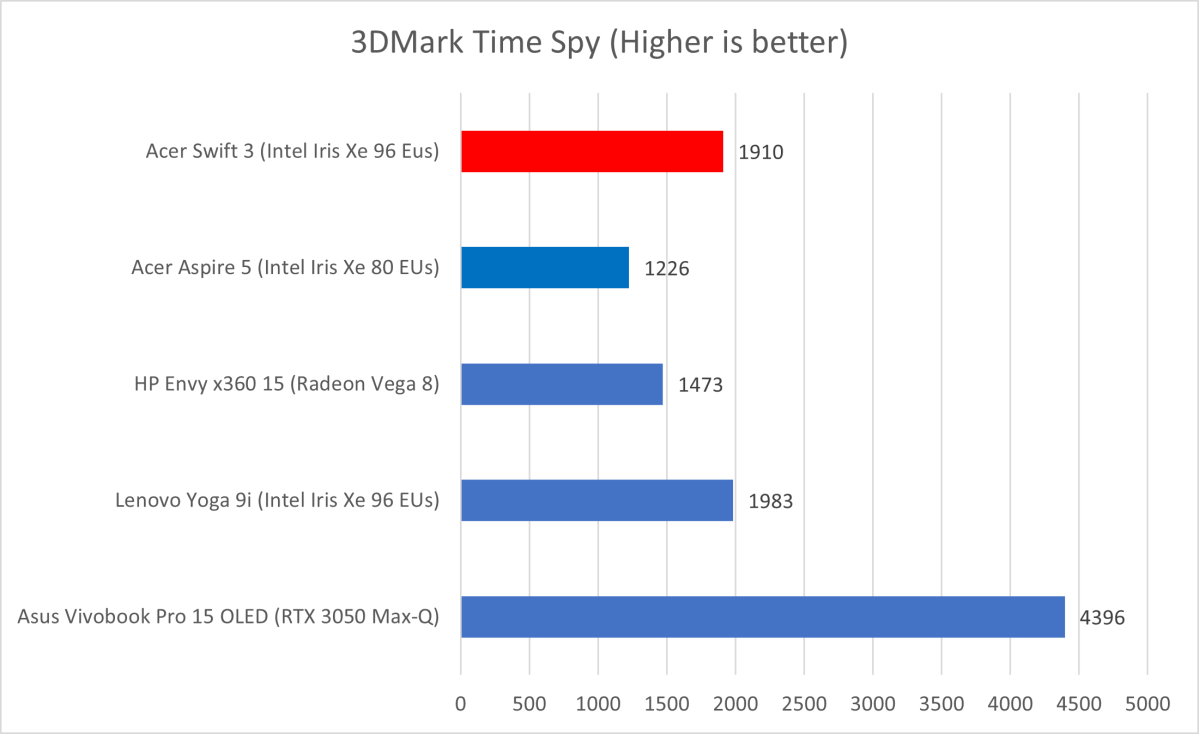 The Core i7-11370H packs a powerful version of Intel's Xe integrated graphics with 96 EUs and a clock speed of up to 1.35GHz. It delivers great results, posting a 3DMark score well above the Ryzen 7 5700U's integrated graphics and just behind the Lenovo Yoga 9i.

This is about as quick as you can expect from a mid-range laptop without a discrete graphics chip (at least until AMD's Ryzen 6000 arrives) and it's adequate for many less demanding 3D games. Titles like Counter-Strike and League of Legends will feel smooth. More taxing games like FInal Fantasy XIV or Lost Ark are playable but require some cutbacks in image quality settings to stay above 30 frames per second.

Taken together, the benchmark results show a laptop that delivers modest but capable performance. The i7-11370H is notably quicker than the Core i5-1135G7 and i7-1165G7 that are common in mid-range competitors. Integrated graphics performance is also solid, offering usable speeds for gamers who don't mind avoiding titles with cutting-edge graphics.

AMD's Ryzen 7 5700U looms large, however, as it's available at the Swift 3's price point and can beat the i7-11370H in multithreaded tests. Shoppers in need of a mid-range laptop that can handle demanding apps will be better served by AMD.

Acer ships the Swift 3 with a modest 55 watt-hour battery. This is not a large battery for a 16-inch laptop with a processor slightly more power hungry than most alternatives, and it shows. 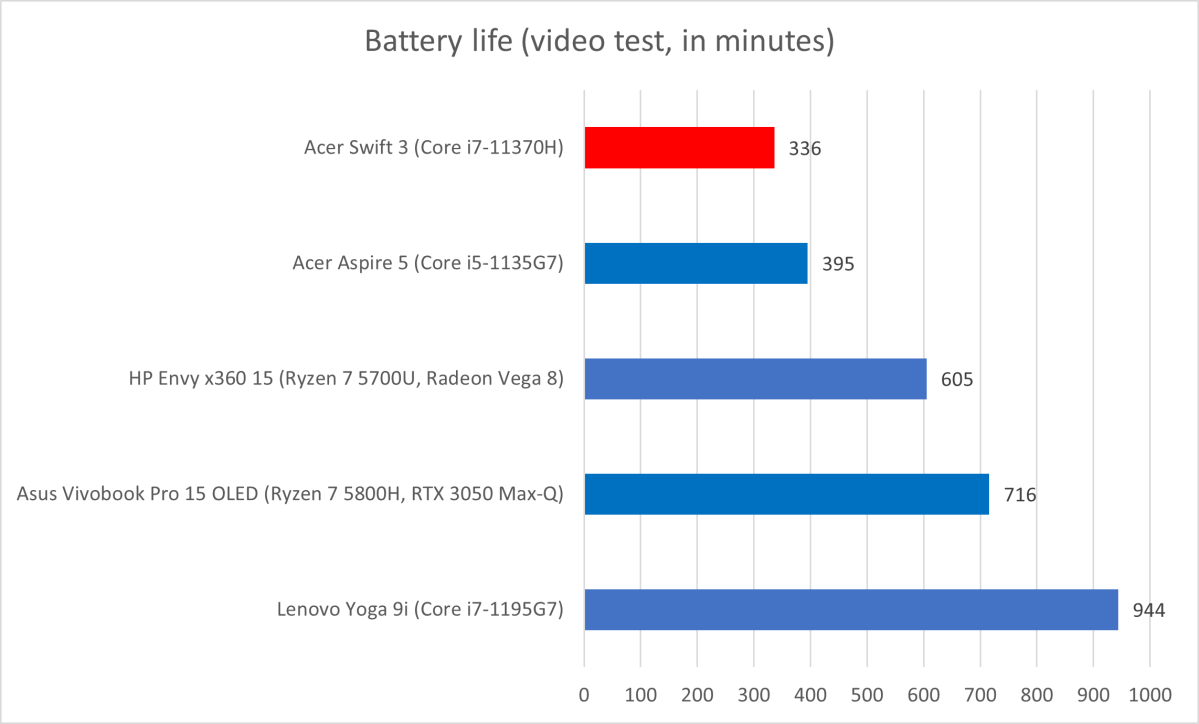 The Swift 3 managed just five and a half hours in our standard video rundown test. That's a disappointing result that falls short of many modern Windows laptops.

I found the Swift 3 can last about five hours in light use. For me, this includes browsing the web, editing documents in Word, using Excel, and occasionally touching up a photo in GIMP. More demanding workloads can cut battery life under five hours. I noticed that one hour-long Google Hangouts call consumed over a quarter of a charge.

This level of endurance is fine for trips to a coffee shop or use around the house but could be a problem if you travel frequently or bounce between conference rooms at an office all day.

This laptop is packed to the brim with software and shortcuts. The taskbar includes both Microsoft Edge and Mozilla Firefox, plus Dropbox and an Amazon shortcut that launches the site in the default browser. Norton Antivirus is installed as well and will happily remind you of all the ways hackers can steal your data if you don't continue the subscription.

Acer's Swift 3 is all about the screen. It's among the most affordable 16-inch laptops available, rivaled only by Lenovo's 16-inch IdeaPad. Despite this, the Swift 3 delivers a great 1080p screen with a high contrast ratio and accurate color. It's ideal for multi-tasking, watching movies, and streaming shows.

Look past the display, however, and the laptop is less exciting. The Intel Core i7-11370H is usually behind AMD's Ryzen 7 in demanding apps, though Intel's Xe integrated do manage a win. Battery life is a problem as well and makes the Swift 3 of limited use for travel despite its slim, sleek profile.

This laptop is great for students, writers, accountants, researchers, and anyone else who wants a big screen on a modest budget. If you need multi-threaded performance or battery life, however, consider an AMD alternative.