Band Hero for the DS comes with two peripherals. 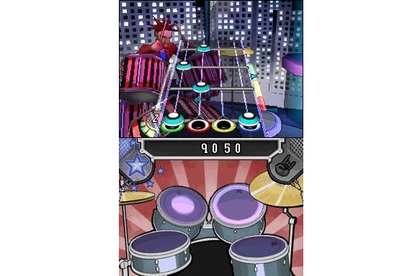 With three portable iterations of Guitar Hero currently on store shelves, it was inevitable that Activision would introduce the full-on band experience onto Nintendo's popular handheld -- but how well does it work? The lack of a Career mode and On Tour's infamous hand-cramping peripheral really hurts the overall experience.

With Rock Band's release in 2007, a plastic guitar and a set of noiseless drums were all it took to make any group of friends feel like the next Led Zeppelin. Now, after two years of rhythmless drum solos, broken pedals and a new taste for 70s music, Activision has decided to snatch a slice of the pie, transforming Guitar Hero into the all-new four-way band. But where Harmonix stopped at life-size peripherals, Band Hero went one step further: the handheld.

Band Hero for the DS comes with two peripherals. The "Guitar Grip," as seen in Guitar Hero: On Tour, allows the player to hold down the fret buttons with one hand and strum the touch screen with the other in order to play either the guitar or bass. I, myself, managed to play one song before my wrist started cramping. Three, and my wrist lost all feeling. Fortunately, the price your wrist pays is at least rewarded by a touch screen that seems to respond to strumming far better than its predecessor.

The drums, however, are far more lenient on the bones. A skin with four drum pads, mapped to the Up, Down, A and B buttons, fits snuggly around the DS, requiring only the use of your thumbs. While I eventually ditched the sleeve for the sake of accuracy, the drums themselves provide a fun, rhythmic frenzy. Imagine Dance Dance Revolution with only two digits at your disposal. Most likely, you'll forget the guitar is even an option.

The mic may actually be the least accurate instrument of the bunch. I had to hold the DS an inch from my nose to get it to acknowledge my voice, and even then, the pick-up is a little shotty. Thankfully, you can pull off a mid-song stunt, a mini-game that lends you a boost of Star Power. As obnoxious as these diversions can be, they're the best way to dodge failure.

As for the game itself, I like to call it "Band Hero: Abridged." The set list is varied, fun and up to date, with tunes from Avril Lavigne to The Rolling Stones. However, without a career mode, you have access to all 30 songs from the start. Awards and unlocks granted after good deeds -- earning 5 Stars on a song, playing a set with Judy Nails - keeps the feeling of progression relatively intact, but the inability to go from rags to stardom takes becoming a "Hero" out of the title.

With a palm-sized guitar, thumb-driven drums and mic planted directly over the face, I move to slash the "Band" part from the title as well. As fun as it may be to switch between Thumb Dance Revolution and frantically strumming the touch screen with the stylus, the entire appeal to the "Band" franchise is the feeling that you and all of your friends, without one smidge of skill between the lot of you, can feel like rockstars. Even if the peripherals kicked serious butt -- and they don't -- you just can't hold a jam session with the DS. Add the fact that there's no journey to the Hall of Fame, and all you've got is a sad tale of the one-man band that went nowhere and a terribly cramped wrist.