Alienware's M11x is a good option for gamers who want something small and easy to carry around. It's an 11in laptop with a decent mid-range graphics chip and it can run old and new games alike. It's very well built and its lights look great at night. It's a product we'd be proud to own.

Alienware's M11x is a laptop worth considering if you're after something small that packs a decent punch in the graphics department. It's an 11in, 2kg gaming notebook with plenty of RAM and hard drive space, and it has two graphics cards — one for when you're on the road and need as much battery life as possible, the other for when you want 3D grunt that's capable of running many of the current games on the market.

But while the dual graphics capability of the M11x is impressive for an 11in notebook, we were more impressed by the laptop's build quality. It has a mag-alloy body that provides plenty of strength and the chassis has been designed so that there are no weak points. For example, there is no optical drive built in to it (you can buy an optional slot-loading external drive), nor is there an ExpressCard slot — so there are no large, hollow spaces around the edges that are susceptible to bending. Furthermore, the battery doesn't clip flimsily onto the spine of the notebook; instead, it sits safely inside the unit. 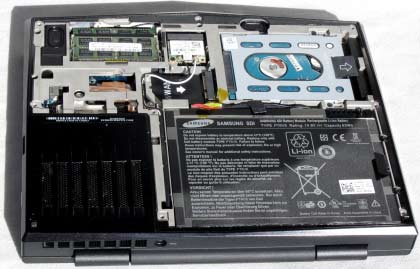 You can easily get to the battery and all the other replaceable components by removing the one-piece base cover. The battery is in the lower-right, with the hard drive above it and the two DDR3 RAM slots sit in the top-left corner.

There aren't any vents on the sides of the M11x, but there are a couple on the bottom. The main one is for the cooling fan, which is quiet and extracts warm air through the rear of the notebook. There are filtered vent holes above the locations of the RAM and hard drive, and these double as escape points for the speakers' sound. We didn't notice much warmth from the base of the M11x during our tests, but it's still advisable not to block the vents while the notebook is being used for gaming.

Of course, there is one aspect of the Alienware M11x that you'll either love or hate: the lights. And there are plenty of them. You get the alien head on the lid, the Alienware name below the screen, the alien head above the keyboard, the keyboard itself is lit up, and then you also get the 'headlights' at the front. The truth is, the more you use this notebook, the more you come to love the lights because they just look so awesome at night. They definitely give the M11x a wonderful aura.

The keyboard lights in particular are easy on the eyes and make typing an absolute joy in dark environments. The keys themselves feel soft yet sturdy when they are hit, which makes typing very comfortable despite the keyboard being a little cramped overall. The touchpad is far from cramped though: it's 8x4.3cm and it's very accurate. It does has a texture that can be slightly ticklish, however. The left- and right-click buttons are soft and comfortable to press. The touchpad's software only supports one multitouch gesture: pinching. 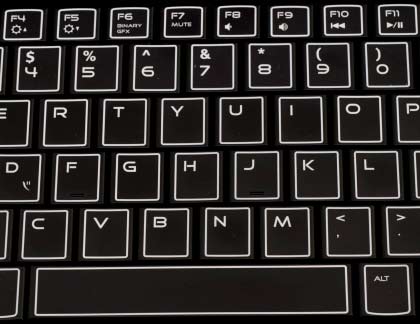 The keyboard lights are very easy on the eyes when using the notebook at night.

You can change the colour of all the light elements and make your own schemes, and you can even create transitions from one colour to another. All this can be done through the Alienware Command Centre (pictured below). Of course, you can also switch off the lights for when you want to use the notebook in a public place and don't want to make those around you jealous. 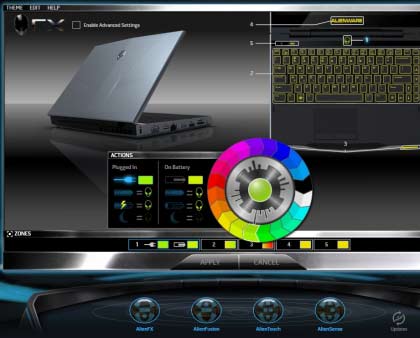 The Alienware Command Centre can be used to personalise your system.

Around the edges of M11x you'll find three USB 2.0 ports, HDMI, VGA, DisplayPort, FireWire, 10/100 Ethernet, microphone and headphone ports (two of the latter). You also get an SD card reader. Bluetooth and 802.11n dual-band Wi-Fi are also present, and there is a webcam that can be used in conjunction with face recognition software to log you in to the system. We found this to be very inaccurate though — sometimes we could log on immediately, other times it wouldn't recognise us at all. The only blemish in the features department is the lack of Gigabit Ethernet for faster LAN transfers.

The CPU inside the Alienware M11x can vary from a low-voltage Core 2 Duo with two cores and a 1.3GHz clock speed, to a low-voltage Core i7-620UM with two cores, Hyper-Threading and a clock speed of 1.06GHz. We tested a version of the M11x with the Core 2 Duo SU7300 CPU and used the built-in overclocking function in the BIOS to run it at 1.73GHz. The Core 2 Duo ran with 4GB of DDR3 SDRAM (it runs Windows 7 Home Premium 64-bit, so all the RAM is available), a 7200rpm, 320GB hard drive and a 1GB NVIDIA GeForce GT 335M graphics adapter, but its overall performance wasn't spectacular. It recorded times of 1min 58sec and 2min 23sec in our Blender 3D rendering and iTunes MP3 encoding tests respectively, and both times are slower than the similarly configured ASUS UL80Vt, which runs an SU7300 CPU at its default 1.3GHz speed.

In our DVD encoding test, where we use Auto Gordian Knot to turn a VOB file into a 1.5GB Xvid file, the M11x took 2hr 29min. This is a far cry from more powerful laptops such as the Dell 15R N5010, which performed the same task in 1hr 10min, and it shows that the M11x, in its Core 2 Duo guise, really isn't a powerhouse notebook for undertaking taxing processing tasks. However, its hard drive speed recorded an average transfer rate of 29.27 megabytes per second in our tests, which is good going for a notebook.

But the area in which the M11x is designed to shine is graphics — and it does. You can switch from the integrated Intel GMA 4-series graphics to the NVIDIA GeForce GT 355M graphics by pressing the Fn + F6 key combination (the F6 key has a graphics label on it so you know to press it) and the difference in grunt between the two processors is tenfold. The Intel chip recorded a score of 670 in 3DMark06, while the NVIDIA chip recorded 6296.

Both chips do a fine job of driving the 1366x768-resolution screen (and it's a vibrant screen by the way, with excellent contrast and brightness and without too much glare off its reflective surface) while running office and Web apps, as well as playing movies. But the NVIDIA chip is the one you'll want to switch to for gaming. You might not be able to play all of the latest titles unless you tone down the graphics detail somewhat, but being able to play them at all on such a small unit — if that's your thing — is impressive nonetheless.

The Alienware M11x has two graphics chips so that you can switch to the less powerful one and gain more battery life when you're on the road. In our tests, during which we disable power management, enable Wi-Fi, turn up the brightness and loop an Xvid-encoded video, the laptop's 8-cell, 63-Watt-hour battery lasted 3hr 2min using the NVIDIA chip. Using the Intel chip, the laptop lasted 4hr 1min in the same test. Both are good results, especially since we tested with all the lights on, too.

Overall, Alienware's M11x is one of the best small laptops you could ever hope to find. It's very well designed and built, and its lights are soothing when you have to type up a document late into the night. The configuration we tested it with is a good one, and while we weren't thrilled when undertaking high-end tasks such as video encoding, the notebook's very good graphics performance makes up for it.