ASUS is back for round two with the thinner, lighter and faster Padfone 2 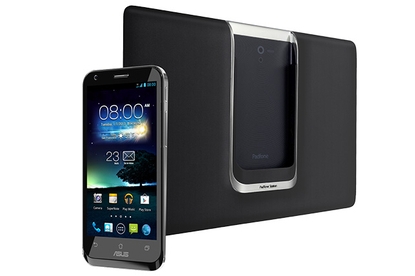 The ASUS Padfone 2 is thinner, lighter and faster than the original Padfone and has significantly upgraded internals. There's no word yet on an Australian release date or pricing, so watch this space.

The original ASUS Padfone, an Android phone that docked into a tablet shell, was certainly an interesting idea. However, it was unfortunately held back by a chunky and heavy design and too many disappointing bugs. ASUS is back for round two with the aptly-named Padfone 2, a thinner, lighter and faster upgrade over the original Padfone.

Read our review of the original ASUS Padfone here

The ASUS Padfone 2 is an upgrade in every sense or the word but it's the downgrade in size that's the biggest advancement here. The Padfone 2 package now weighs a competitive 649g all up (Padfone 2 docked into Padfone 2 Station) compared to the hefty 853g weight of its predecessor. ASUS repeatedly stressed that the PadFone 2 is lighter than Apple's new iPad, so the docked package is certainly comparable in weight to the best tablets on the market.

ASUS deserves plenty of credit for the design of both the Padfone 2 and the new Padfone 2 Station. The Padfone 2 has a larger 4.7in screen (up from the 4.3in display of its predecessor) yet is only 6g heavier at 135g. It's also thinner (9mm) than its predecessor and the tear-drop design means the phone is only 3.3mm at its thinnest point.

The Padfone 2 Station has an improved design, too. The bulging Padfone door latch on the previous model is gone, replaced by a simple slot that the phone slides into. That results in a thinner and lighter tablet module that weighs only 514g. Curiously, however, ASUS hasn't listed the official dimensions of the Padfone 2 Station.

The bulk-reduction design changes on the Padfone 2 Station have come at a cost. The built-in battery, which charges the PadFone 2 when it is docked, has been downgraded from 6600mAh to 5000mAh. Further, owners of the original Padfone will be disappointed to learn that the Padfone 2 won't work with the old Padfone Station. If you're upgrading you'll need to purchase the new dock, too.

One thing that hasn't changed on the Padfone 2 Station is the display, a 10.1in panel with a resolution of 1280x800. This unfortunately doesn't match up too well with competing higher resolution panels of tablets like the new iPad, the upcoming Acer Iconia Tab A700 and even ASUS' own Transformer Pad Infinity.

ASUS hasn't only focussed on the physical design of the Padfone 2 as the specifications have been significantly upgraded, too. The 4.7in IPS+ display now has a 720p resolution of 1280x720 and is among the first smartphones to use Sharp's IZGO display technology. ASUS says the screen has a brightness of 500nits.

The Padfone 2 is also equipped with a 1.5GHz quad-core Snapdragon S4 processor and has a hefty 2GB of RAM, while the battery has been increased in size from 1520mAh to 2140mAh. The other significant upgrade is the rear-camera, which now uses a 13-megapixel lens manufactured by Sony. According to ASUS, the backside-illuminated camera can record 720p high-speed video at 60fps and can capture 100 consecutive photos at 6fps.

ASUS doesn't appear to be selling the PadFone Stylus Headset and Padfone Keyboard Dock accessories with the Padfone 2. The capacitive stylus accessory for the original Padfone doubled as a Bluetooth headset thanks to an answer button, a speaker and a microphone, while the physical keyboard dock turned the Padfone into a netbook-style device and had a built-in battery.

The ASUS Padfone 2 will initially ship with the 4.0 Ice Cream Sandwich version of Google's Android operating system, though ASUS says it will be upgradeable to the 4.1 Jelly Bean in the coming months.

ASUS will launch the Padfone 2 "before the end of 2012" in Europe and Asia, but there's been no word on an Australian release. Thankfully, LTE 1800MHz compatibility is listed in the official ASUS specifications, so the Padfone 2 is likely to work on the 4G networks used by Telstra and Optus once it launches Down Under.