Manage and automate connections among audio and Bluetooth devices while easily checking their battery levels. AirBuddy sands down the friction for Mac audio devices, particularly those branded by Apple and Beats.

The AirBuddy app offers a low-effort way in macOS to view the status of your Apple and Beats audio devices, quickly connect their audio to your Mac, and stay on top of their current charges. It's a nearly frictionless addition to macOS, one that makes you wonder (as many Mac Gems do) why Apple hasn't built in these controls.

Bring any supported audio device near your Mac, and AirBuddy brings up an iOS-like bubble display that shows the equipment, your name for it, what it's associated with, the current battery level (or levels), and a Click to Connect link. With Apple or Beats earbuds, the bubble appears when you open the case; with the AirPods Max, it's triggered when you remove them from the case.

In macOS 12 Monterey, AirBuddy recognizes all Apple and Beats audio hardware plus some devices from other manufacturers, like the Sony WH-1000XM3. With older versions of macOS, some newer audio hardware isn't supported, and no third-party hardware is recognized. Buddy Software provides a detailed chart for guidance and troubleshooting.

AirBuddy pops up a bubble with information about your nearby device. You can set alerts about a low battery or fully charged status.

Despite deep integration into iOS, iPadOS, and macOS of my Beats Studio Buds, it's an ongoing and often irritating battle to switch the association from one of my devices to another. AirBuddy makes it a single click to swap—and a click in the automatically appearing bubble no less. 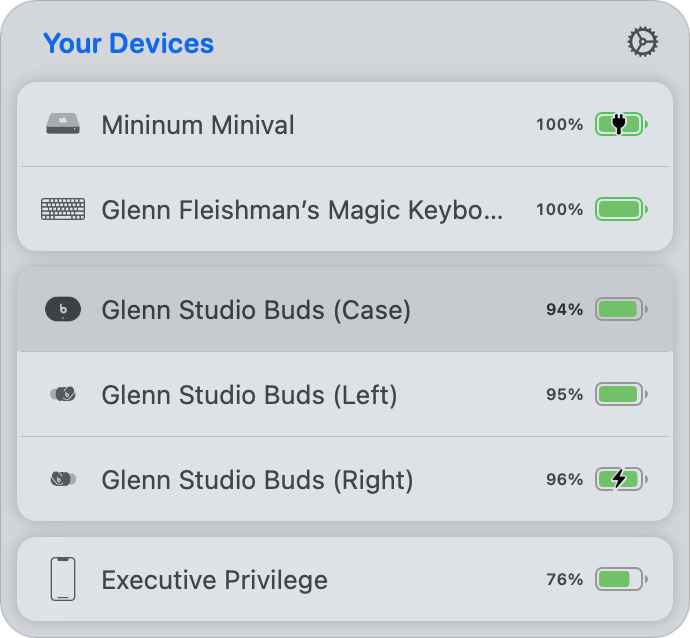 Get a rundown of the charge level of all your mobile and Bluetooth devices and your Macs running AirBuddy with a click.

We don't live in the days before lithium-ion batteries revolutionized the time we could spend using devices between charges. But we also don't yet live in the future, when ostensibly a single fill-up might give us weeks of noise-canceling earbuds time. AirBuddy provides the right help in being aware of your peripherals and audio devices' declining power and staying on top of recharging them.

A drop-down system menu lets you see the current levels of every kind of thing AirBuddy can monitor: audio hardware; Bluetooth keyboards, mice, and other input devices; and iPhones, iPads, and Macs. You can set alerts about devices, too, being warned when the charge drops to a low level—you can set the percentage—or getting a notification when it's fully charged.

For earbuds and headphones with different listening modes, like transparency and noise-cancellation, you can access those through the AirBuddy system menu. You can also create Audio profiles within AirBuddy that can switch listening modes, change audio input (to or from your audio device), and change the volume. It also provides an easy way to disable AirPods auto-switching, in which the earbuds or headphones switch among iCloud-linked devices by inferring where they're needed. (This can cause problems for people on their own or sharing an iCloud account, as I documented in a Mac 911 column.)

If you frequently switch wireless keyboards, mice, trackpads, and other pointers among Macs, the app's Magic Handoff feature lets you transfer the Bluetooth connection with a single menu navigation and right-click—no more multi-step operation to disconnect it from one Mac and connect it with another. 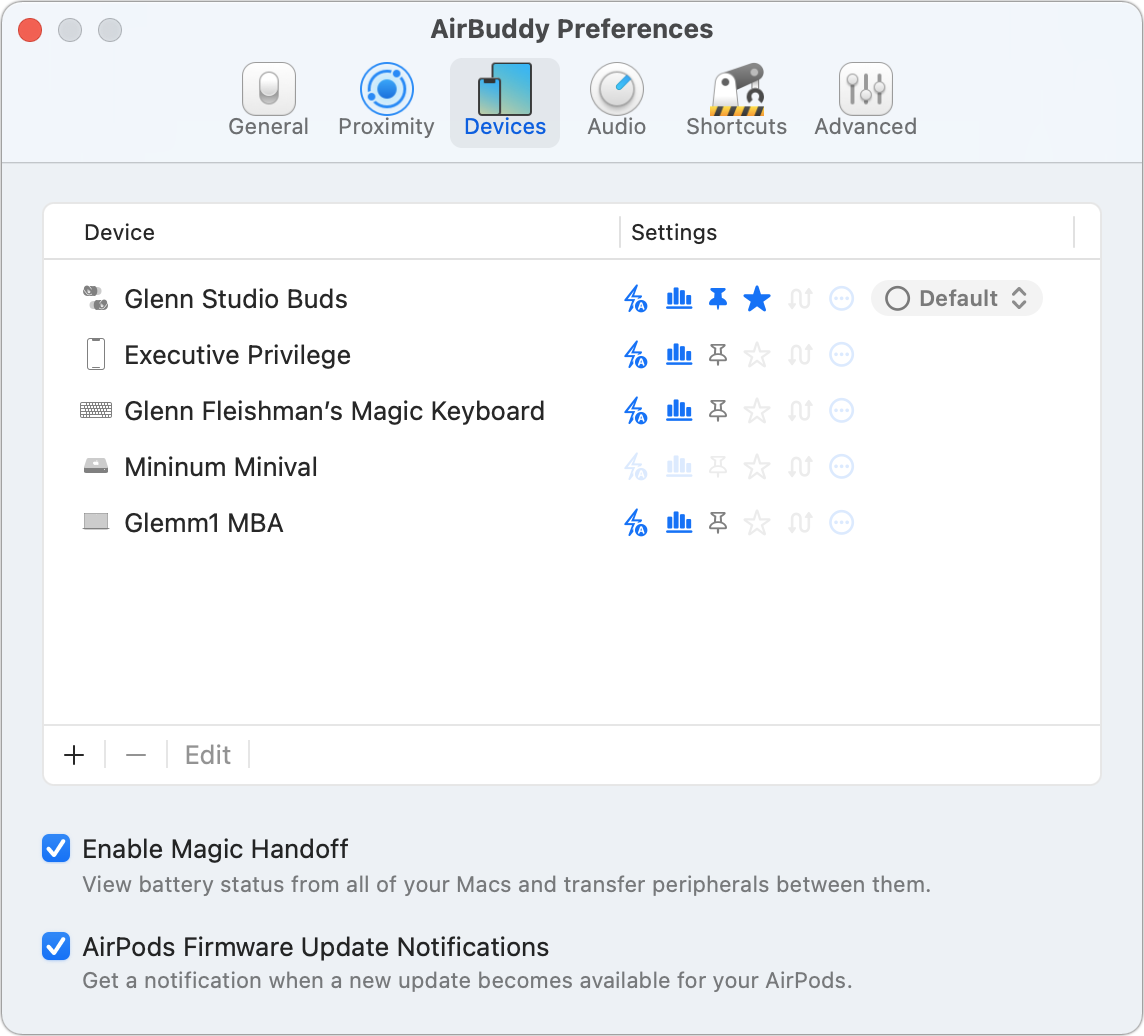 AirBuddy lets you set keyboard shortcuts within a preference pane. It can also be controlled via macOS 12 Shortcuts.

The app requires macOS Mojave 10.14.6 or later, but it offers the best device support in Big Sur and Monterey. This is due to features Apple offers in the operating system and hardware features that AirBuddy taps into. The app also requires a Mac with Bluetooth Low Energy (LE), found in nearly all Macs shipped starting in 2013.

You can purchase the app from Buddy Software directly. The $9.99 license includes five activations, letting you use it and Magic Handoff among all your Macs. It's also available as part of a Setapp subscription.

AirBuddy sands down the friction for Mac audio devices, particularly those branded by Apple and Beats. It also provides at-a-click battery information and feature access that feels as natural as if it were designed into macOS.

This is AirBuddy's first Macworld and Mac Gems review.