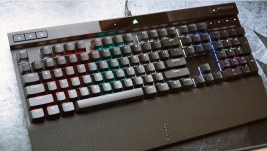 The K70 RGB Pro makes a play for gamers with lots of expendable cash, but its annoying sound profile and lack of modularity put it behind the competition.

Mechanical keyboards are more popular than any given superhero movie, especially when you restrict your search to the gaming keyboard subset. So in order for a high-end, expensive board to get a recommendation, it needs to nail pretty much every aspect of its design and performance. The Corsair K70 RGB Pro doesn't do that. It's merely good. And in a market this crowded, that's enough to put it behind the leaders of the pack.

While the keyboard has a solid build and goes for genuine Cherry switches that are specifically tuned for gaming, a few lapses in execution mean there are better choices available. Keyboard purists will be instantly repelled by the constant ping I experienced in the review unit, and others will be unimpressed by the lack of premium extras. In short, it's just not worth the US$170 (AU$299) asking price.

The full-size version of the Corsair K70 RGB Pro comes in an absolutely massive box, and you soon see why. It's a big, beefy keyboard, with a large area above the function row dedicated to LED status lights, a full metal scroll wheel, and extra buttons that control mute, brightness, profile, and locking mechanism. The keyboard also comes with a generous magnetic palm rest that I found both comfy and sturdy, and a premium 6-foot USB-C-to-A braided cable.

Corsair didn't cheap out on the materials, at least in the most obvious parts of the design. The board uses a stylish brushed metal deck, which is one solid piece going over the various angles, as well as premium PBT plastic keycaps. They're double-shot, so not only will they display the RGB lighting evenly and brightly, they'll never wear down no matter how many hours of sweaty gameplay you subject them to. That's a definite plus: some competing brands make you pay for the PBT upgrade. The layout is standard, so you can easily swap in your own caps if you care to. 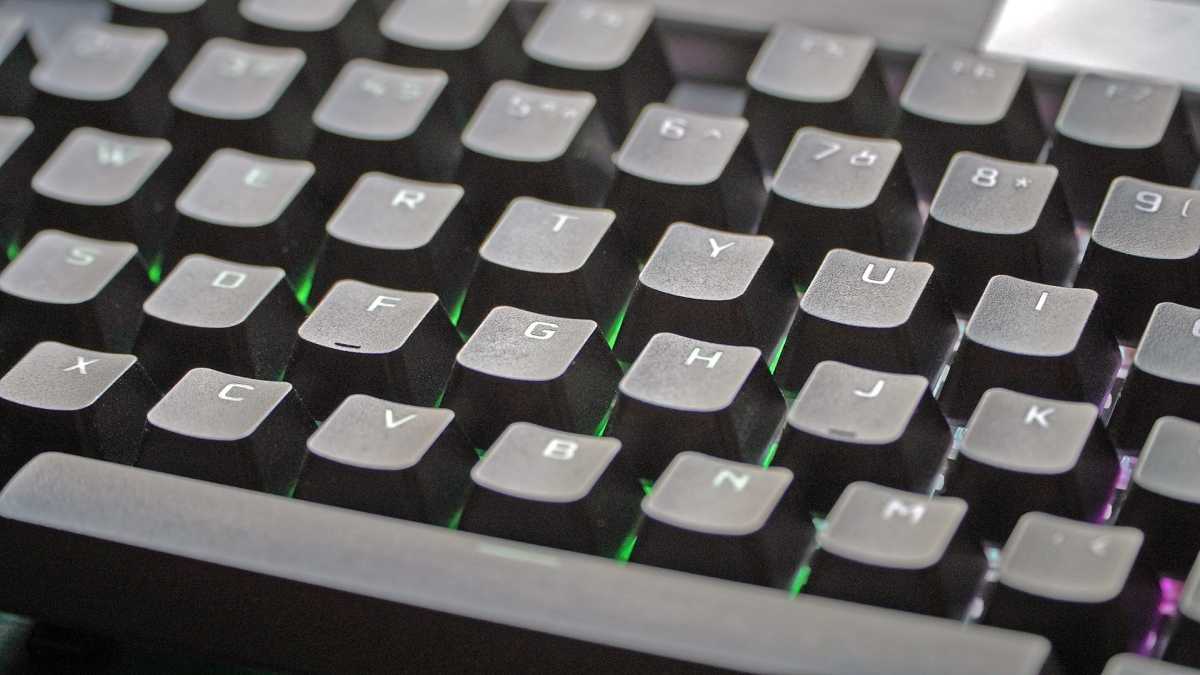 Underneath the caps are genuine Cherry switches straight from Germany (by way of China), game-friendly linear MX Reds on my review unit. MX Speed switches with lighter springs and faster activation are available, as well as MX Brown and Blue for tactile and clicky typers and silent Reds if you need your keyboard to be a little less noisy. I appreciate the options…but on a board this expensive, a modular design that allows hotswapping switches is becoming much more common. Its absence is felt here.

On top of all that you get dedicated media controls above the 10-key zone, dual-stage keyboard feet for three separate typing angles, and a dedicated switch for tournament mode (which disables custom profiles and macros). The K70 isn't Corsair's most bombastic gamer keyboard, but it's probably the biggest and priciest one that most users would consider stretching their budget to accommodate.

Typing with the K70 RGB Pro was, frankly, annoying as hell. The PBT keycaps, metal keyboard plate, and hollow plastic body created a distinct ping noise with every single keystroke. And I mean every single one. While I'm no stranger to noisy keyboards — I've built some with Kailh BOX Navy switches! — this ringing echo with every tap threatened to drive me up the wall. 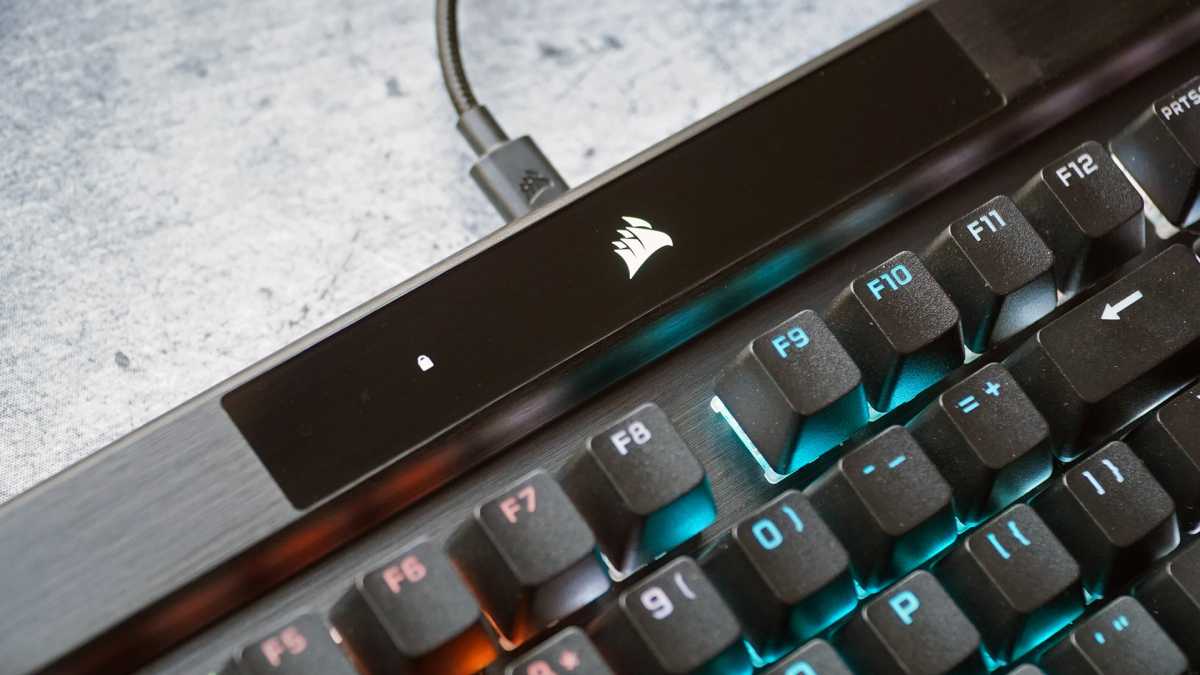 If you constantly work with music or headphones on, this isn't really an issue. But I think most users would find this incredibly aggravating, especially if they opt for the silent switch option. A little Googling shows that it isn't an isolated issue and is commonly experienced with Corsair board designs that feature metal plates, so I'm not prepared to chock this up as a lemon review unit. Stabilizers are also a little loose and have some rattle to them, but that's pretty typical of gaming boards. 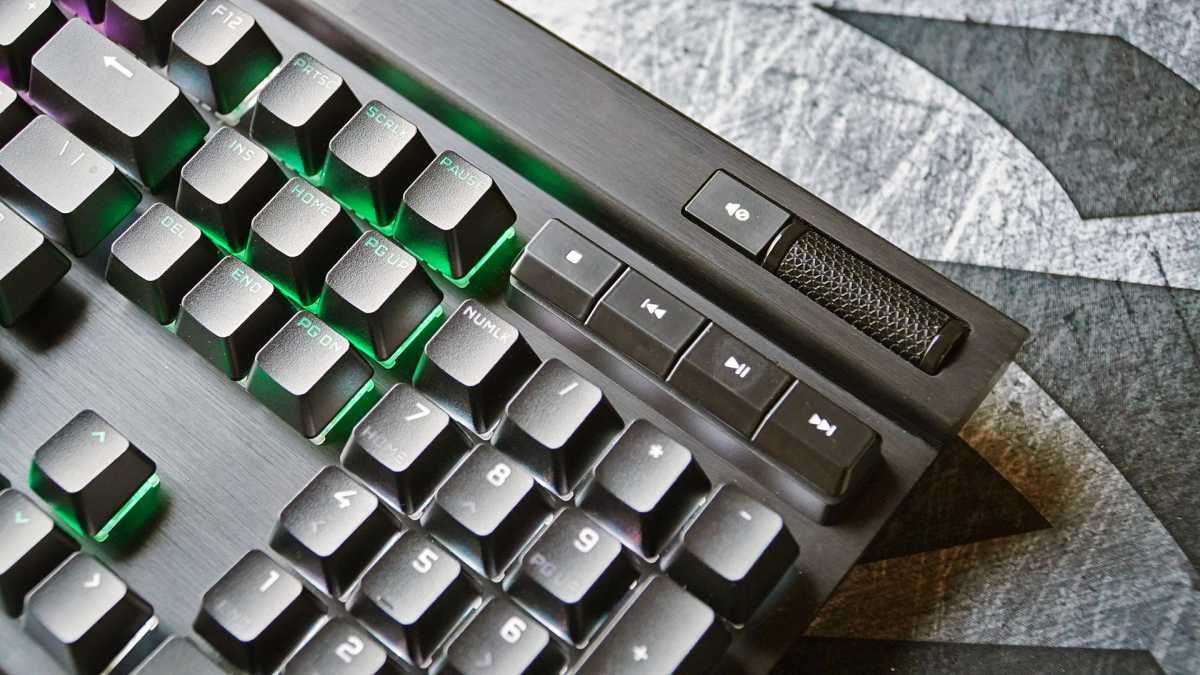 Beyond the awful noise, using the keyboard for work was serviceable if not outstanding once I put some noise-canceling headphones on. The keycaps are a particular high note, with a slightly grainy texture that made adjusting from my usual board extremely easy. The adjustable feet and slightly rubbery wrist rest are quite comfy. The volume wheel is handy, but it has a smooth action that doesn't notch, so it feels loose and a bit unsatisfying combined with the Windows digital volume controls.

Using the K70 to game was a better experience than typing, if only because my focus was taken away from that awful pinging noise. I find that keyboards are generally interchangeable in terms of performance for PC gaming, since your layout is usually determined in-game. But for those who need it, the K70 can easily handle custom keystroke assignments in the busy but functional iCue software. The usual macros and per-program profiles are present. 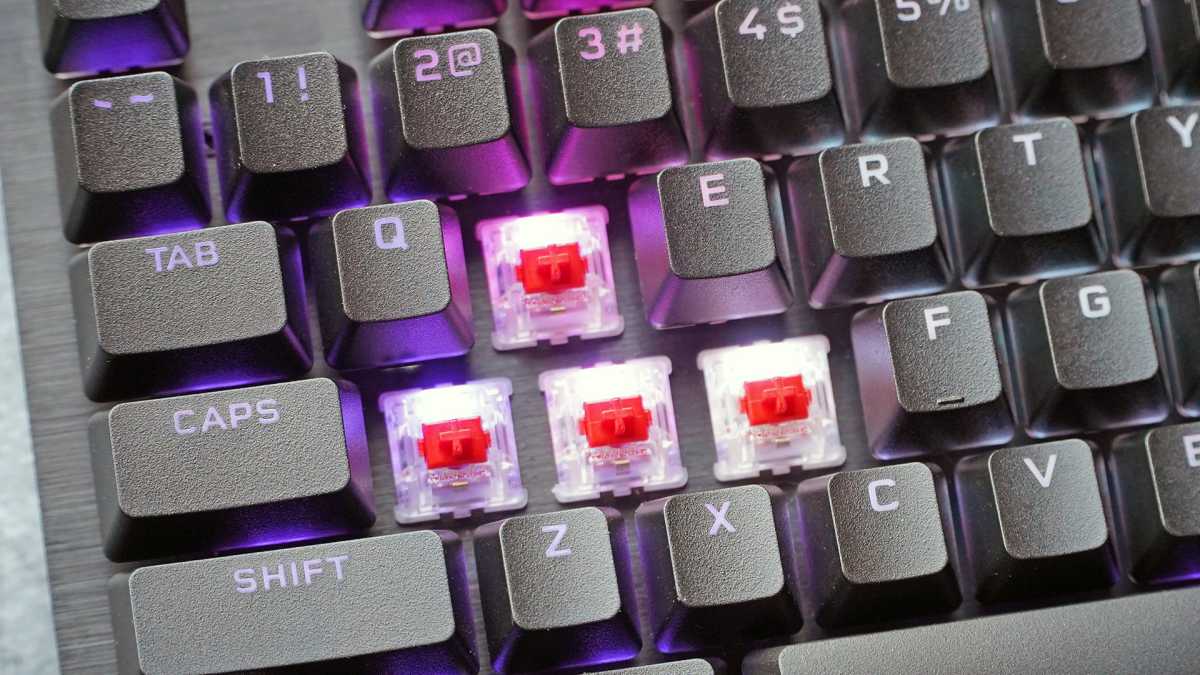 There are some thoughtful additions here. Almost all gaming keyboards have a game lock function that disables the Windows key, but in iCue this mode can also disable Alt-Tab, Shift-Tab, and if you're particularly susceptible to ancient memes, Alt-F4. There's a 1000Hz/1Ms polling rate, faster than just about any human can detect, and even an option to adjust for switch debounce time to keep from an accidental hardware-triggered double-tap. 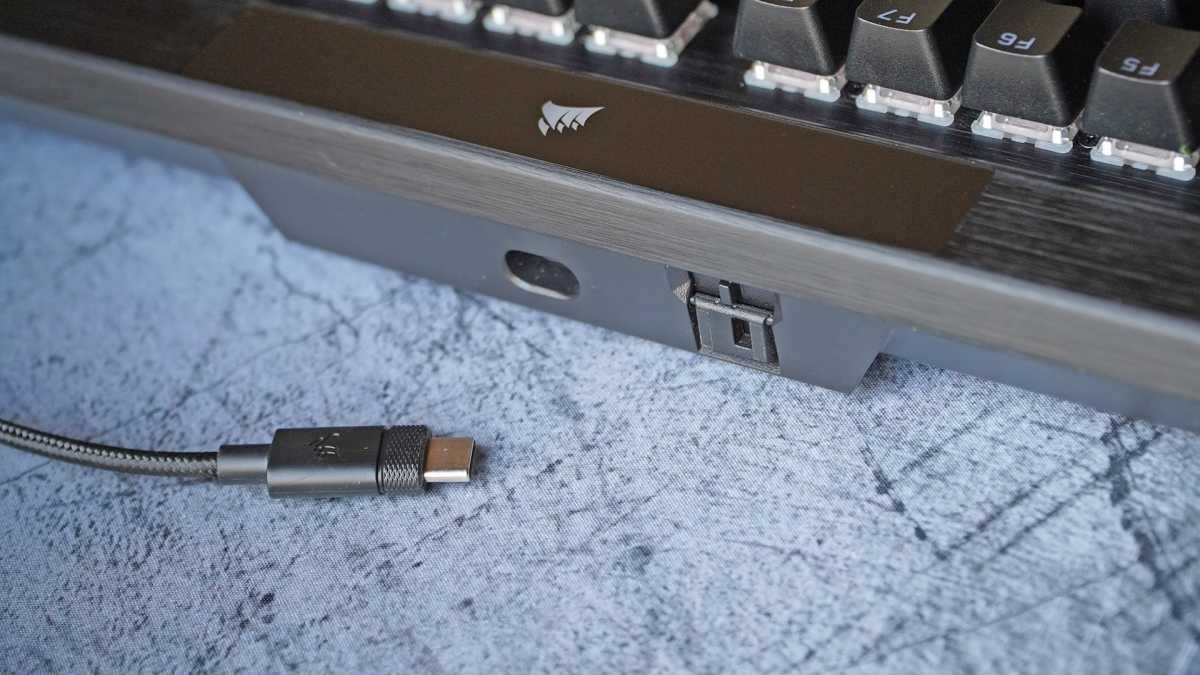 Lighting options are extensive, with more than a dozen preset animations, custom programming, and syncing with other iCue-enabled devices and even Google Home or Alexa routines. If you'd like to roll your own lighting that's also an option. There are three different LEDs underneath the space bar, which add absolutely nothing to functionality but are appreciated for the sake of aesthetics. While this huge board lacks some of the more flashy extras like side-mounted lights, the bright LEDs will suffice if you like your desktop to look like a tiny thumping rave.

On top of the standard key layout, the K70 gives you dedicated profile, lighting, and game lock buttons on the top left, and stop, back, play, and forward media controls on the top right under the volume wheel, and a dedicated mute button. None of these are mechanical, but they don't really need to be. 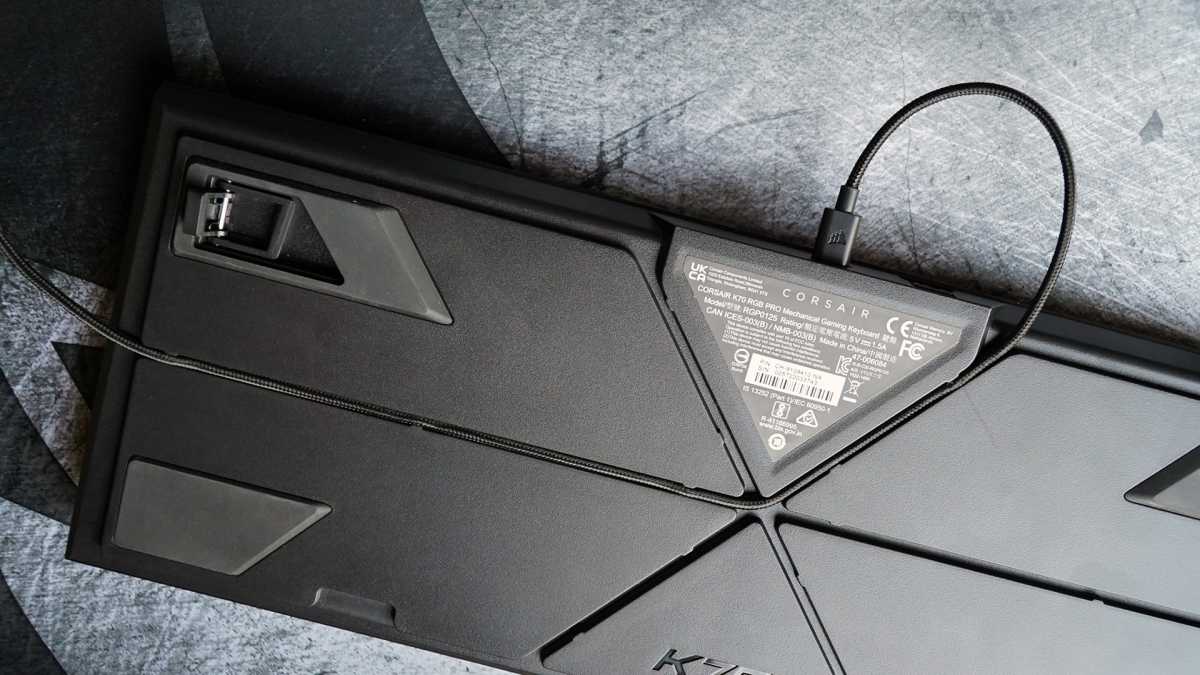 Again, the dedicated scroll wheel feels loose and unsatisfying. I really wish it was both notched and pressable, which would negate the need for muscle memory for both volume and mute functions. One last neat little touch: There are dedicated grooves in the bottom plastic portion of the case for semi-permanent cable routing. It's a nice addition if you're not ready to jump to wireless just yet.

The K70 RGB Pro costs US$170 (AU$299). And that's a figure I really can't get over. A $200 board with as many features as this one has could be forgiven for merely okay extras and incredibly annoying ping sound. For as much as Corsair wants for this one, I can't recommend it. 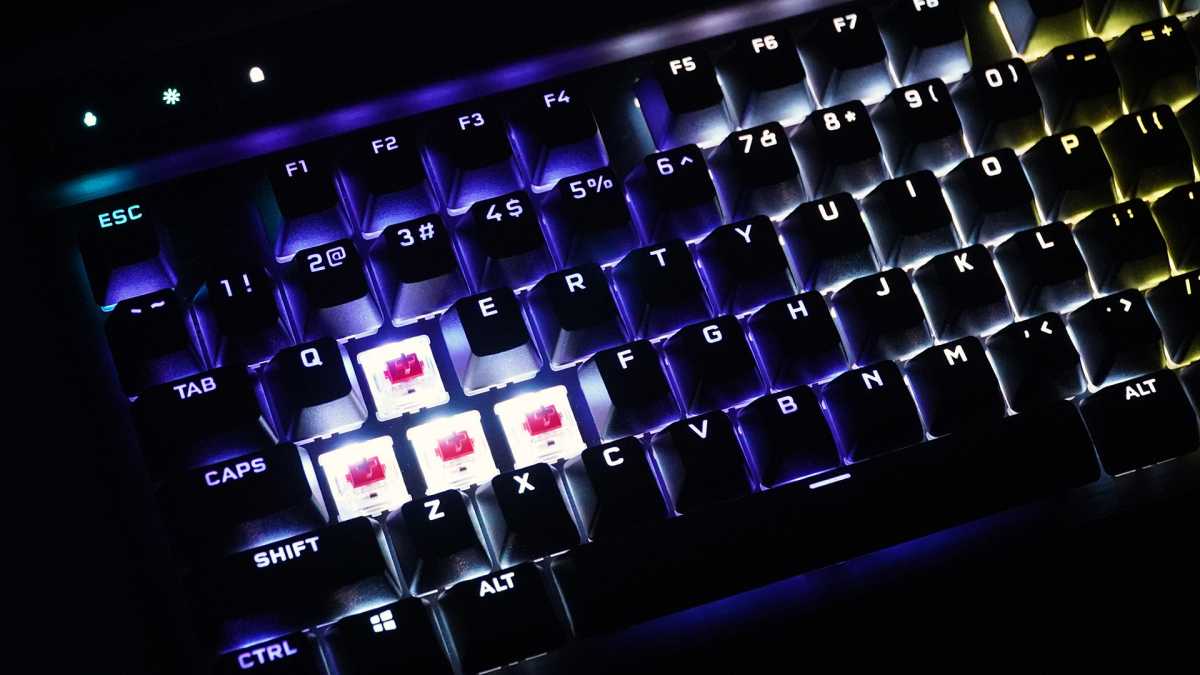 That kind of money could get you a premium design with a full metal case and hot-swap switches, if not quite so many gamer choices. Razer's broadly similar BlackWidow V3 is $30 cheaper, though you lose that if you want PBT keycaps. HyperX offers all the same controls at about half the price on the Alloy Elite 2, with an even more deluxe model at the same price. And at this price there are several deluxe wireless options.

The K70 is okay, and if you can ignore the awful noise of the switches and body, even good. But in this market, that's just not good enough.