PeakHour review: Save yourself from the headaches of network troubleshooting PeakHour offers incredible bandwidth tracking at an absurdly low price for the household and small-business network administrator. Many of us have been volunteered into that position by our families or employers, and we sometimes invest hours of troubleshooting problems that would be easily resolved if we had the proper data and more of it.

PeakHour offers incredible bandwidth tracking at an absurdly low price for the household and small-business network administrator. Many of us have been volunteered into that position by our families or employers, and we sometimes invest hours of troubleshooting problems that would be easily resolved if we had the proper data—and more of it.

PeakHour gathers together network statistics of all kinds and from many sources. Like tools built into macOS and available inexpensively, you can track data entering and leaving your Mac. It presents this information as a running chart in the menu, and via graphs and other visual and numeric displays you can view by clicking that menu. But that description barely scratches the surface.

PeakHour can also communicate with consumer-level and more sophisticated routers and other equipment on your network to pull in a continuous stream of bandwidth statistics. On my home network, my primary TP-Link router provides this data via UPnP (Universal Plug-and-Play). PeakHour discovered the router with its automatic setup wizard, and let me add it with a couple of clicks. (PeakHour supports UPnP and SNMP v1, v2, and v3.)

By tracking bandwidth usage directly at the edge of your network—between you and the internet—you can often immediately pinpoint whether the internet connection is at fault. You can also track overall bandwidth consumption relatively precisely, useful with internet service providers who have caps on service or charge overage fees. PeakHour lets you set alerts so you're warned as you approach limits or charges.

You're not limited to router bandwidth and your Mac's data usage. PeakHour suggests during setup that you monitor internet performance by tracking the round-trip time to a remote server, like a public DNS site. A chart of this latency helps you differentiate between network bandwidth slowness (a lack of data flowing) and internet weirdness (a slow response or lots of interruptions and dropped data packets). 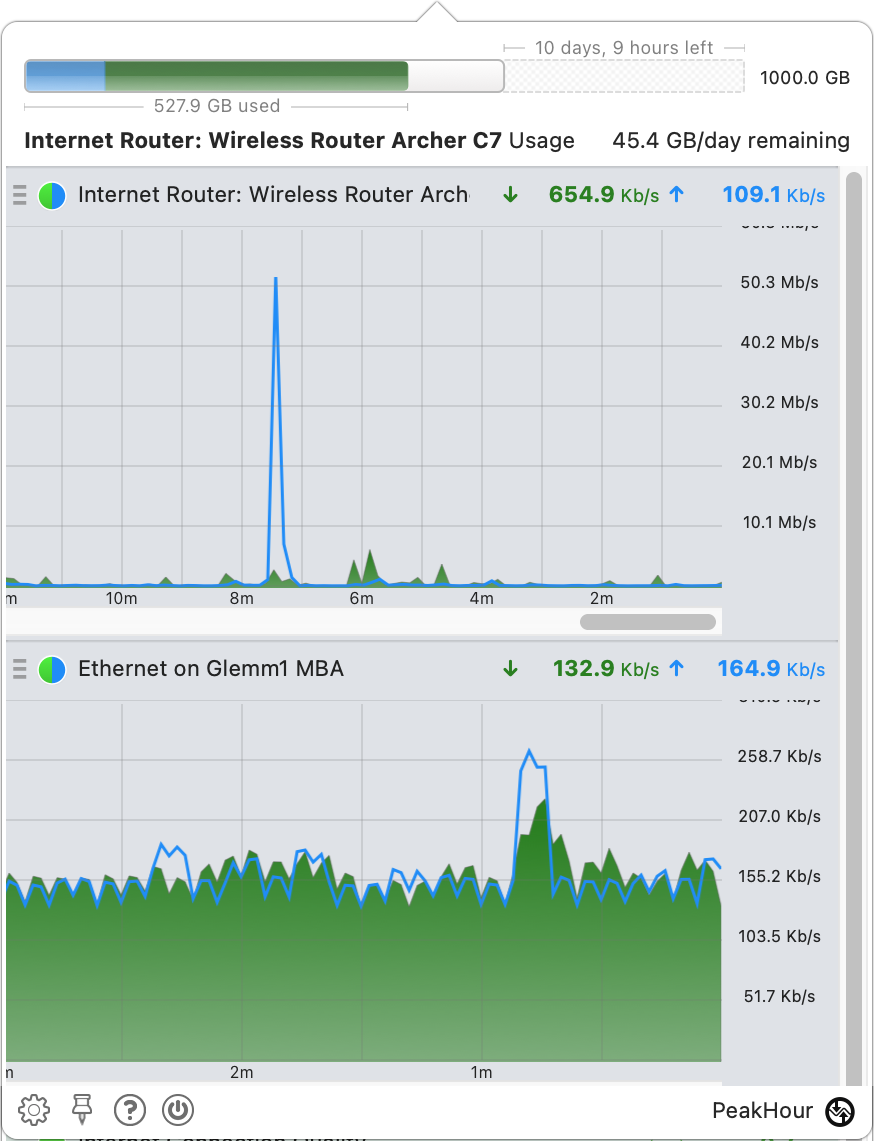 PeakHour's drop-down charts reveal the current and historical state of devices on your network along with other monitoring data.

PeakHour supports more esoteric configurations, too. My network has a dreaded double NAT in which my ISP provides one router into which I've plugged a second one: the ISP router doesn't offer all the features I need but has unique firmware support for the fiber network I'm on that most routers lack. PeakHour scoffs at the difficulty and lets me pull internet responsiveness stats via this two-deep ISP router as well as from my local network.

If you like, you can install free additional software from PeakHour on other Macs on the network so that they act like network broadcasters within the network, too, and you can monitor their data usage and network response. (Technically, it configures SNMP software in macOS.) If those Macs running the extra package are logged into the same iCloud account, PeakHour discovers them automatically and suggests adding them. Conversely, enabling a built-in web server allows remote access to PeakHour's stats. 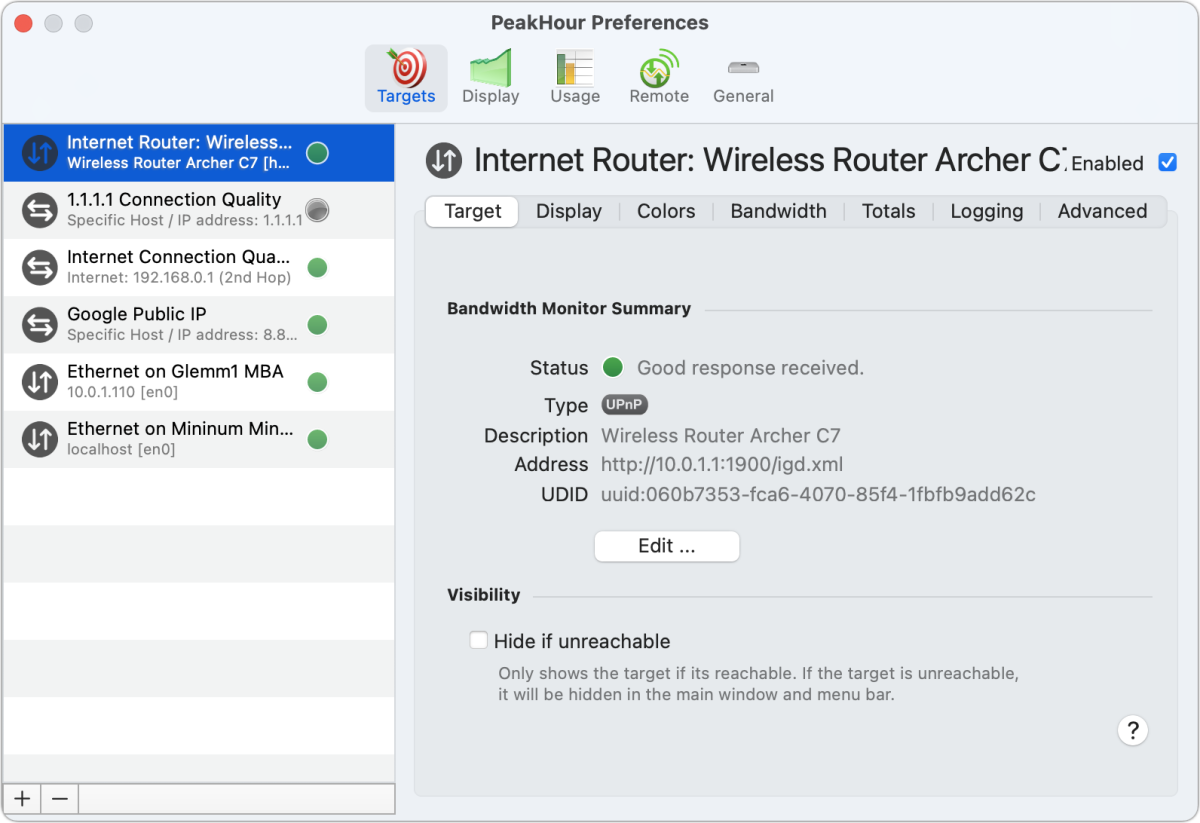 Since installing PeakHour, I've become dependent on its data flow. When network glitches emerged before, I used to have to dart around the house, checking routers and computers. I couldn't tell without a little bit of digging where a problem lay. Our ISP is shockingly reliable and rarely the cause. When it is, PeakHour reveals its problems at a glance.

PeakHour provides oodles of graphs and numerically presented data. The configurable menu bar can show the incoming and outgoing bandwidth for any router, Mac, and other devices, as well as your cumulative monthly data usage. Click the menu to reveal a graph for each actively monitored item. Hovering over a graph reveals tools for adjusting the time dimension, locking the scale, sharing an image, and viewing history. 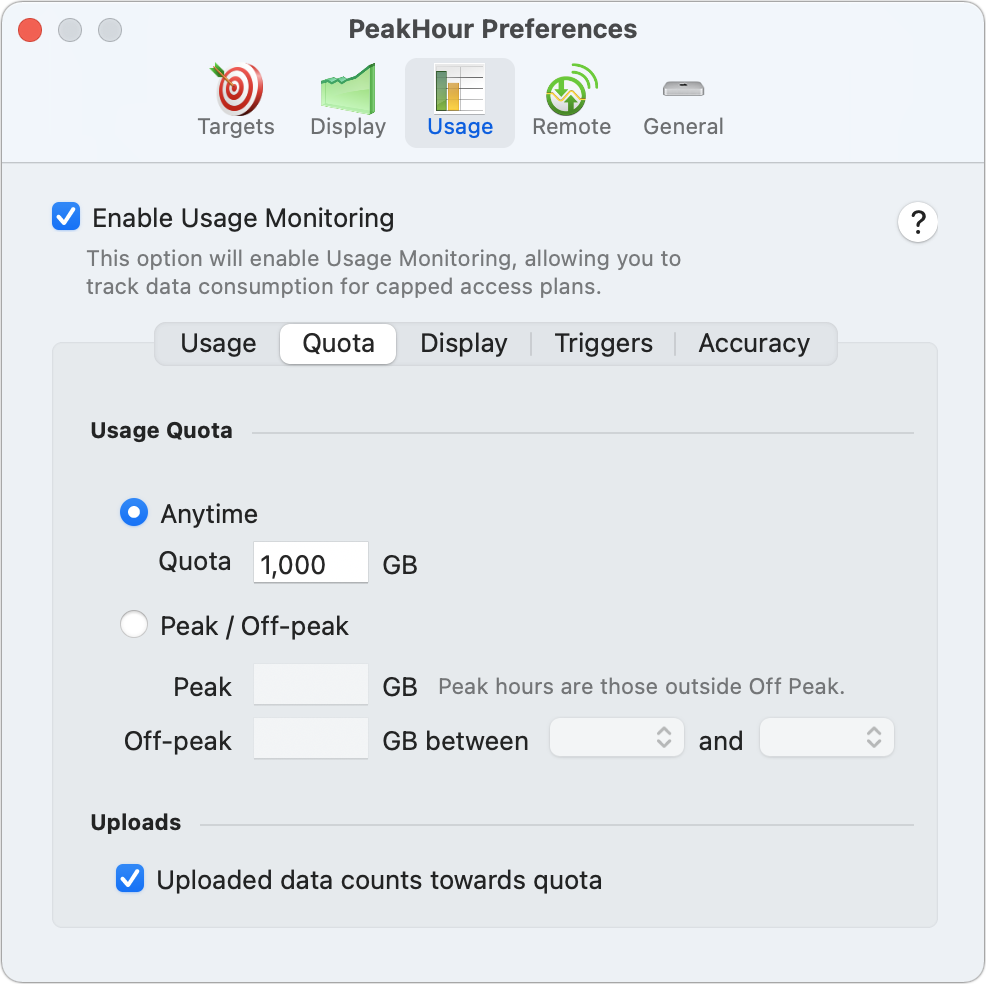 Quota tracking helps you manage usage and avoid overage fees or other limitations.

Because every network is different and thousands of router models exist, you can install a fully functional ten-day trial to test out PeakHour. The app requires macOS 10.10 or later. The directly purchased and Mac App Store versions are functionally identical, but you must download the app directly for the ten-day trial.

At its current sale price of US$4.99 / AU$7.99 (50 percent off list), it's hard to imagine that less-than-a-latte's worth of cash should stand between you and network peace of mind. 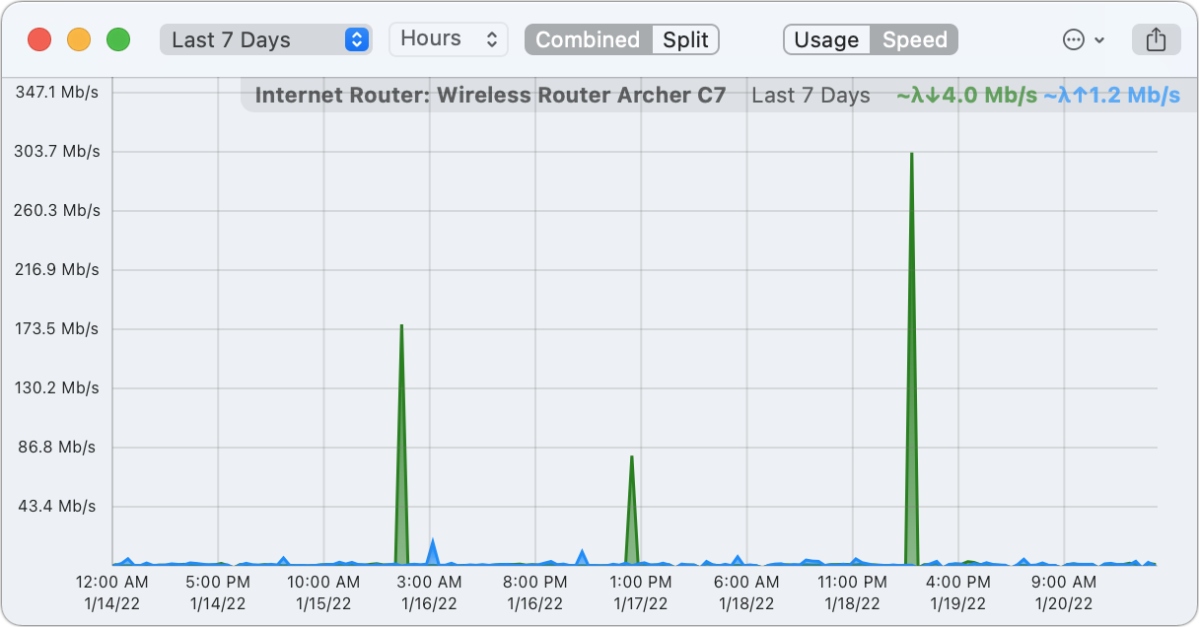 Historic data can reveal patterns, usage, and problems on your Internet-connected router or with your Internet feed.

PeakHour is just a few years old. This is its first appearance in Mac Gems.