PopChar X review: Find the character you need in a font without fuss

Whatever your purpose, PopChar unfolds a panoply of fonts and characters for ready browsing and access. PopChar remains a useful adjunct for print and interactive designers and interface builders 35 years after its introduction.

Few pieces of Mac software can claim the history of PopChar, a utility that makes it a click and a hover to see the appearance of individual characters in fonts installed on your Mac. Released in 1987 for System 5 and revamped as PopChar X for Mac OS X 10.2 in 2002, many current users weren't born when some of us relied on PopChar as a critical part of our daily workflow in PageMaker, QuarkXPress, and InDesign. (Or even Ready, Set, Go!)

From its earliest days, PopChar popped. When you click in a preferred corner of the screen, the utility pops out, giving you easy access to hundreds to tens of thousands of characters in a given font in its palette-like window. Examine the repertoire available in the font. Hover over a letter to get more information. Click to insert it as plain text, rich text (at a specified size, even), or HTML. And browse your installed typefaces to find the right fit for what you're designing or producing. You can adjust a given font's viewing size individually if the default is too large or too small. 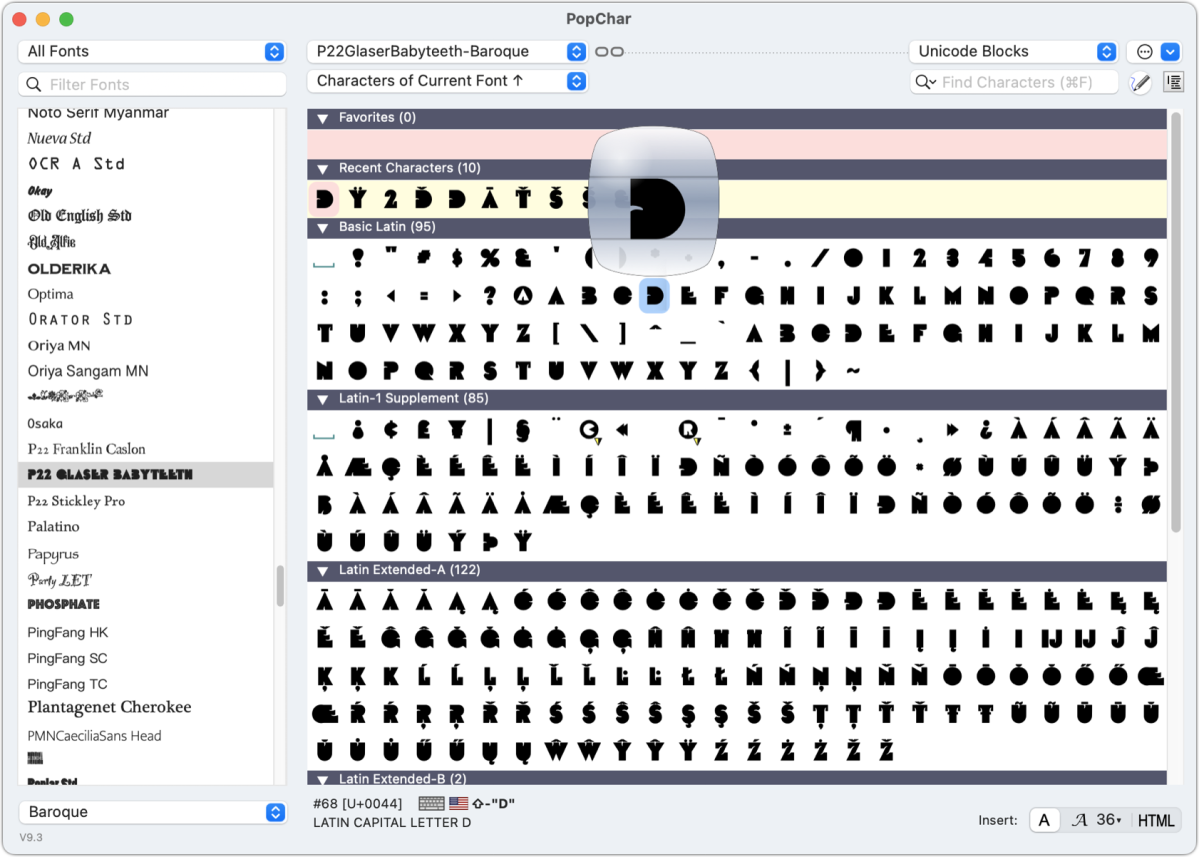 PopChar's main view lets you select a font and then view its entire set of character organized in various ways. The status bar at bottom shows you detailed information, including how to type it (if available) and what format to insert it in. Image: IDG

Even when adding Shift and/or Option, pressing keyboard keys only reveals a fraction of modern fonts' characters. (A font here is a set of characters, or glyphs, in a given typeface and style packed into a font file.) Many typographic extras are hidden. You either need to use a design program with a view-all-characters option—like Adobe InDesign's Glyphs viewer—or use the Typography option in the Fonts palette, accessible within Pages and many other apps. (See How to make use of typographic refinement in Pages and other macOS software.)

Fonts hide many extras. Many fonts include full Latin, Greek, and Cyrillic alphabets; swash characters; oodles of ligatures, or combinations of letters drawn together to avoid clashing stroke parts; small caps, which are essentially lowercase capitals; lining (uppercase) and old-style (upper/lowercase) numerals; superscripts and subscripts; and other symbols. 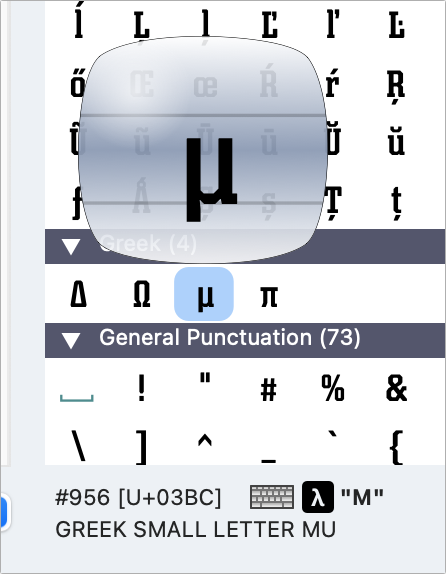 Apple provides little help, and that's why PopChar continues to flourish. Before Mac OS X, Apple's Key Caps app let you select a font and see how characters appeared on a keyboard. OS X brought Font Book, which can reveal the entire set of characters in a style of a typeface—but not provide any organization, ease of access, or simple insertion into a document.

Beyond scanning characters visually, you can retrieve information about them. Hovering over offers two sets of choices: review information in a packed status bar at the bottom or Control-click for contextual goodies.

The status bar shows all the technical details of the glyph: its decimal number, its Unicode code point, and its full human-readable description in Unicode. The app shows a keyboard symbol plus a flag corresponding to your currently selected keyboard layout. If the keyboard symbol has an X through it, the character can't be typed with that layout; otherwise, the combination of modifier keys and keycaps you need to press appears.

The contextual menu lets you copy the character's underlying information as well as find similar glyph shapes and mark the character as a favorite. Select Character Info, and you can view all the font's details in a dialog box, including a pleasing grid display that shows how the letter or symbol maps against standard typeface measurements. You can also see the same glyph across all fonts that contain it in Character Info's Fonts tab.

If you need a particular character and want to see which fonts have it, hover over the character in a face that does, Control-click, and select Mark Fonts Containing [character]. PopChar puts an identifying symbol next to each font in the left-hand font list that contains a glyph for that item.

Click instead of hovering or Control-clicking and the glyph is placed at the current insertion point in a document, if such a point exists. You can choose in the status bar to insert as plain text, rich text at a size at intervals between 9 and 36, or as raw HTML. That last option inserts an entity, or the form of the character that works with nearly any HTML encoding. 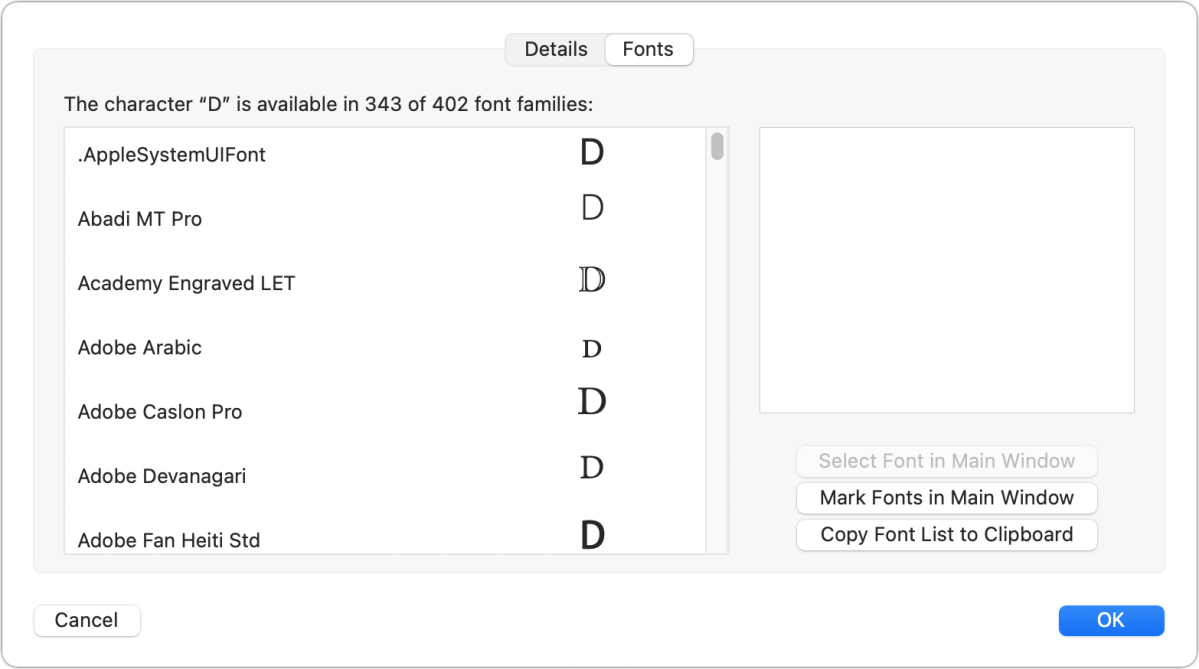 PopChar offers multiple methods, including via a contextual menu, to find the same glyph or character across all your installed fonts.

You can use PopChar in a lot of ways. You might know or want to find out if a given special character exists in a font you're using. You could be trying to figure out the typeface that works for a design or interface but need to examine what the font offers in full before proceeding. Looking for a flourish or symbol? You can quickly scan through font collections you've organized in Font Book using PopChar.

Ergonis, PopChar's developer, lets you try out PopChar indefinitely by installing a free version that reveals only a subset of characters in each font. The company prices its software in euros: a single-user license is €29.99 (about AU$44) for two machines owned by the same person or company, and a same-household, non-commercial license for up to five machines is €49.99 (about AU$74).

PopChar remains a useful adjunct for print and interactive designers and interface builders 35 years after its introduction. If you have the motor memory of twitching your cursor into a corner and clicking, it will come back to you. If not, you'll quickly find revealing PopChar becomes an instinct.

PopChar X was last reviewed with the 5.0 release in 2010. We said then, If you work with multilingual or technical documents, or if you frequently use dingbat fonts, PopChar X 5 will quickly pay for itself.