Huawei's durable Discovery Expedition can take one hell of a beating The Huawei Discovery Expedition's durability will definitely appeal to tradies. This shock, water and dust resistant handset can definitely take a hell of a beating, but it is a little overpriced considering its limited feature set.

Smartphones may be the device of choice for the large majority of consumers, but there's some people who require something far more durable. The Huawei Discovery Expedition is a shock, water and dust resistant handset that's ideal for builders, plumbers, miners, or those who simply need their phone to take a beating.

Built tough, but some annoying flaws

The Huawei Discovery Expedition has a high ruggedness IP rating of 57. This means it is both water and dust resistant. Huawei is very careful to point out that the phone isn't completely waterproof, though it is submersible in water up to one metre for 30 minutes and is rated as sand dust resistant up to degree 5. If you want your phone to take a beating, then the Discovery Expedition is for you. We ran it under a tap for over 30 seconds, dunked it in a full jug of water, threw it into the sink and buried it in a pile of dirt. On all occasions, it survived without any issues whatsoever.

The Huawei Discovery Expedition achieves this ruggedness thanks to the combination of tough plastic and a rubber seal preventing water seeping through to the internals. Behind the rear cover is a sealed battery door that can only be unlocked by using a coin or a small, flathead screwdriver. It's a bit of a hassle to open and unlock, so if you're buying this phone as a work device and plan to swap out your SIM for the weekends, you should keep this in mind. 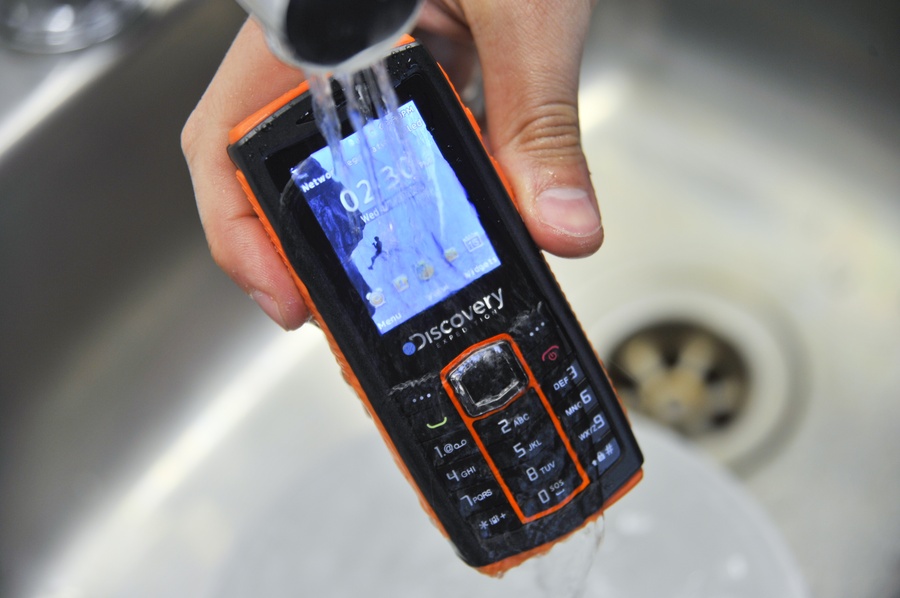 The Huawei Discovery Expedition can survive the harshest of conditions, including being drenched in water.

Interestingly, the "Discovery" branding on the phone is from the actual folks behind the Discovery Channel — this is Huawei's first "co-branded" mobile phone. Aside from the Discovery logo below the screen and some Discovery themed images of hikers, rock climbers and the like pre-loaded in the gallery, there is no real added benefit to the branding for the user.

There's also nothing really remarkable about the design of the Huawei Discovery Expedition. It's a candy bar shaped phone with a non-touchscreen and a traditional numerical keypad. On the right there's a volume control along with a flashlight button that activates an LED at the top of the phone when held for a few seconds. All other navigation is achieved by a spongy feeling five-way navigational pad, two selection keys and answer/end call buttons.

The sides of the Huawei Discovery Expedition have an arrow shape imprinted into them, which makes the phone very easy to grip and hold. The bright orange accents on the top and sides also mean the handset should be difficult to misplace. The top mounted headphone jack and micro-USB ports are sealed by plastic flaps. The same applies for the antenna port on the bottom, which can be used to boost reception in low coverage areas. 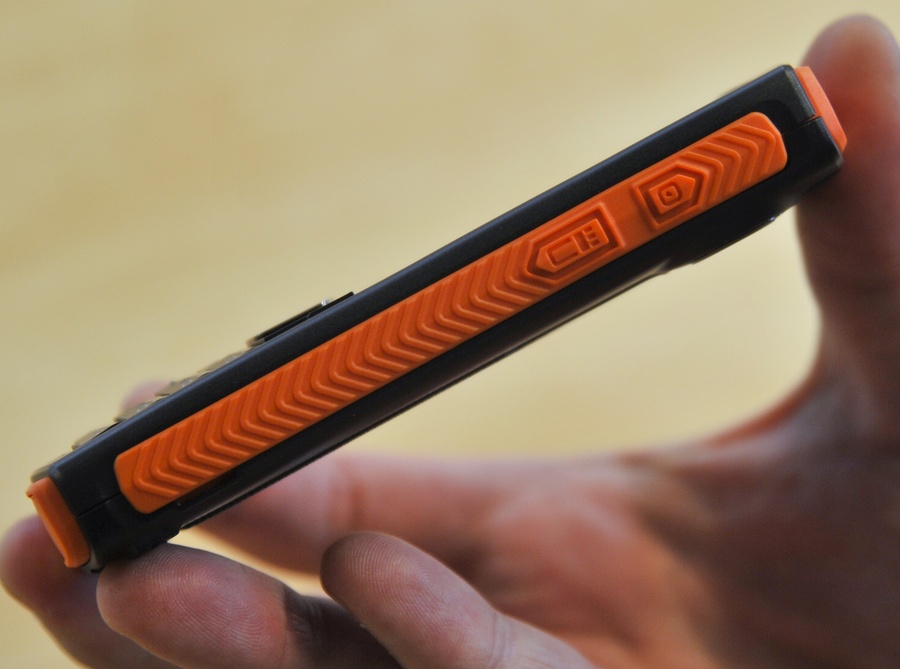 The sides of the Huawei Discovery Expedition have an arrow shape imprinted into them. This makes the phone very easy to grip and hold.

The biggest issue with the Huawei Discovery Expedition is usability. While we appreciate that all buttons on the phone can be pressed even if you're wearing gloves, the 5 and 8 keys on the keypad require an extremely firm press to activate. More often than not they need to be pressed twice to register, while the volume buttons also require some extra force. This impacts on the overall usability of the phone and makes text messaging in particular a frustrating process.

No smartphone, but intuitive enough

The Huawei Discovery Expedition has a small 2in screen manufactured from Gorilla Glass. The screen is bright and clear when viewed from straight on, though it's difficult to see from an angle. The display is a little reflective indoors but works well in direct sunlight. 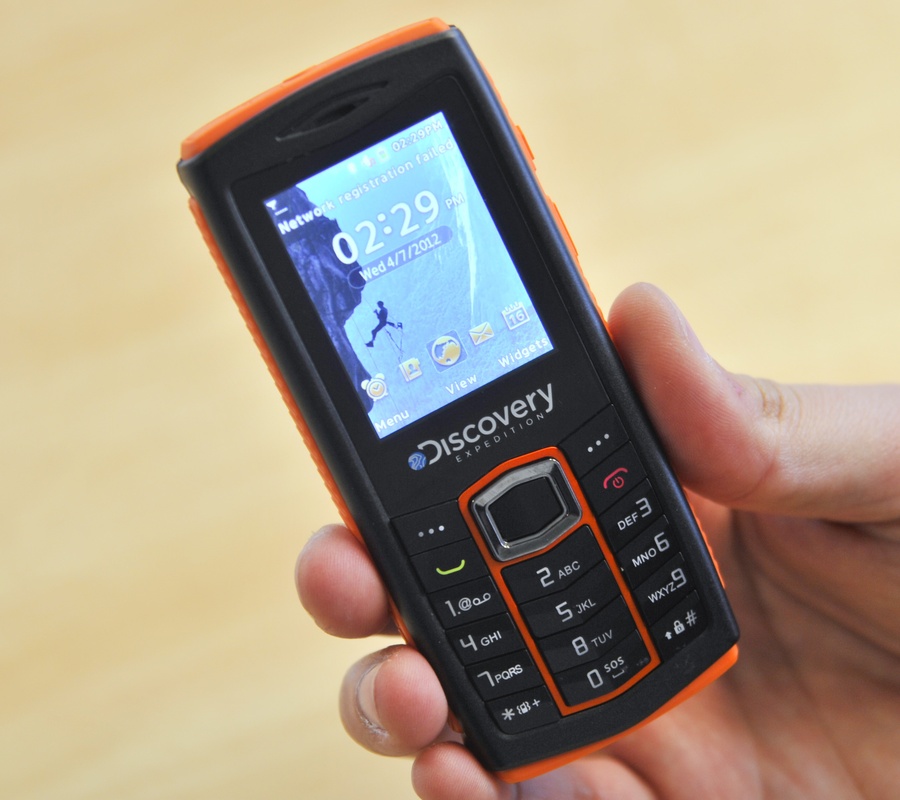 There's nothing really remarkable about the candybar design of the Huawei Discovery Expedition.

The Discovery Expedition runs a proprietary Huawei operating system. All the core, basic phone functions are here including a 1000-entry phonebook, a very basic browser, the ability to send SMS and MMS messages, a music and video player, an FM radio and a range of PIM functions like alarm, stopwatch, calendar and memo. Being an "active" phone, the Discovery Expedition also includes a built-in GPS, a digital compass, the aforementioned torch light and a G-sensor that will record steps.

The Discovery Expedition is relatively easy to use, though we found the default, non-adjustable font quite small which could make it difficult to read for many users. The main menu is a scrollable 3 x 3 grid of icons and most submenus are in a simple list format. Huawei has integrated a few widgets on the home screen, which can be scrolled through using the directional pad. There's a music player, a calendar, an image gallery, a weather app and the FM radio but the screen is a little too small to make them truly effective. 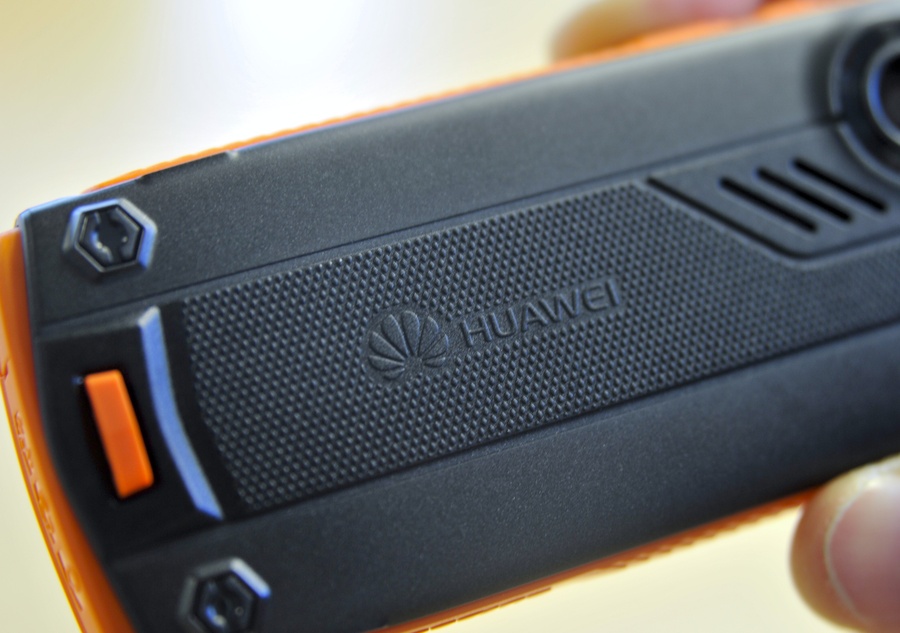 Although it isn't a smartphone, the Discovery Expedition comes with a few basic Java apps. These include weather, Facebook, Twitter and Endomondo. The latter uses the built-in GPS to provide basic fitness functions like tracking your runs, counting steps and giving you accurate distance, duration and speed figures. The Facebook and Twitter apps are usable if you desperately want them, but both are slow and don't provide the most intuitive experience, even if the Discovery Expedition takes advantage of 3G network speeds.

There's also a basic 2-megapixel camera. It takes predictably poor images suffering from lots of image noise and lacking in sharpness but it's there if you need it. Images can be saved on the 68MB available internal memory or the microSD card slot, which is located under the battery. 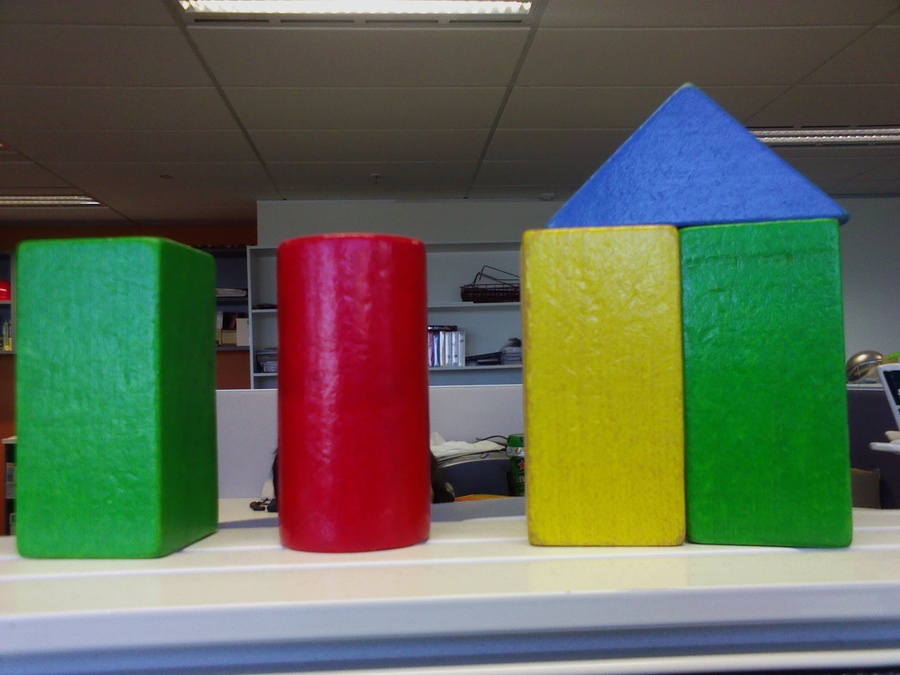 One of the better images we managed to capture with the Huawei Discovery Expedition's 2-megapixel camera.

Battery life is excellent, with the Discovery Expedition easily lasting more over two days during our testing.

The Huawei Discovery Expedition is available through Vodafone for $0 upfront on Vodafone's $19 Plan over 24-months, or $199 outright.