A tiny utility cuts through the constant friction some users experience with window layering in the modern macOS Finder. Front and Center will appeal to those of us with memories of Flock of Seagulls haircuts and Ronald Regan as president, but also new users who just find Apple's window layering blocks how we like to work in macOS.

Some people have unreasonable nostalgia for the good old days, when everything was somehow miraculously better—forgetting the invention of penicillin, modern electric cars, and ubiquitous internet access. Maybe scratch that last one.

Then there's John Siracusa, a programmer, podcaster, and opinion-haver who has reasonable nostalgia, sharing a feeling many of us have that certain aspects of macOS that Apple abandoned or changed were better. For Siracusa, that was pre-Mac OS X methods of window layering in the Finder.

System 7 through Mac OS 9 let you click a single window in a non-foreground application that manages multiple document windows and have the entire set of windows for that app come into the foreground. Mac OS X, continued in macOS, brings a single document window forward.

After relying on utilities for decades that gave him the capability he wanted, the end of 32-bit apps with Catalina—notably PCalc creator James Thomson's DragThing—required that he cause his own to come into being. Front and Center is the result, co-created with Lee Fyock. Like all Mac Gems, it has a single-mindedness that lets you add it to your arsenal while providing options to deploy it selectively. 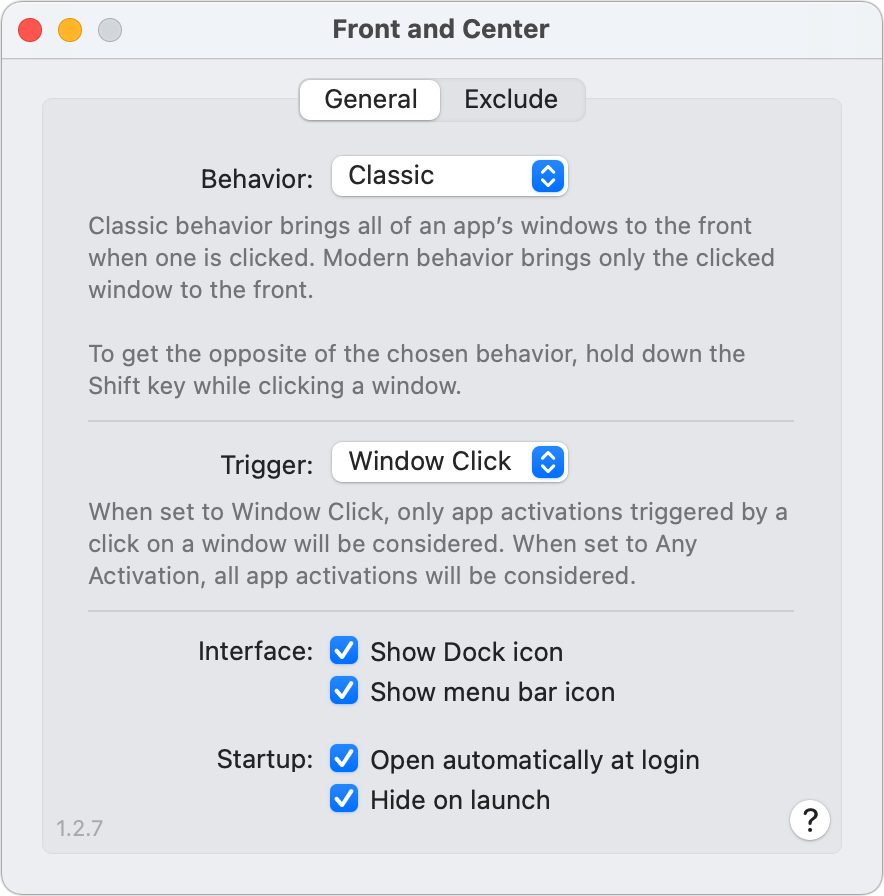 You can toggle between Classic and Modern, and choose whether activation happens with a click or any interaction with a background app.

The General tab of the app lets you switch at will between Classic (pre-Mac OS) and Modern window layering behavior. You can opt to trigger window groupings for an app to bring it into the foreground only when you click a document window (Window Click) or when you interact with a background app in any way, such as Command-tabbing to bring an app to the foreground (Any Activation).

Front and Center offers an Exclude tab into which you can add apps. In my workflow, I often have a separate Safari window open while writing in BBEdit and vice-versa. I want to click on the single window while keeping the other apps' window or windows visible, so I've excluded both of those apps (and Safari Preview). The app gives me the option to Shift-click to still engage its special mode, however.

Front and Center and may appeal both to those of us with memories of Flock of Seagulls haircuts and Ronald Reagan as president, but also new users who just find Apple's window layering blocks how we like to work in macOS. 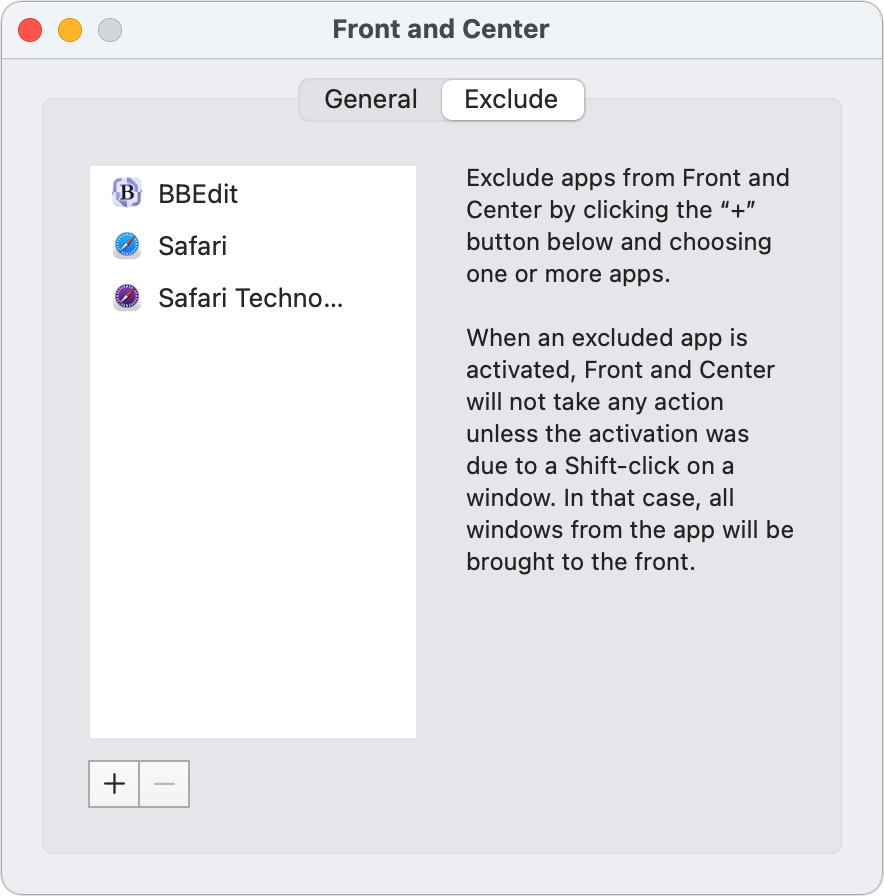 Apps for which you want to preserve the opposite behavior (Modern while the Classic mode is engaged and vice-versa) can be added to the Excludes list.

Front and Center was released in January 2020, and this is its first review in Macworld. John Siracusa, released years before that, was once best known for his exhaustive and revealing deep dives into Mac OS for Ars Technica. You can find him now as a co-host of Accidental Tech Podcast.

Mac Gems highlights great nuggets of Mac software, apps that have a high utility, have a sharp focus on a limited set of problems to solve, and are generally developed by an individual or small company. With the strong resurgence of the Mac in recent years, we want to celebrate tools we use and that readers recommend to make the most of your macOS experience. Stay tuned for weekly updates, and send your suggestions to the Mac Gems Twitter feed (@macgems).