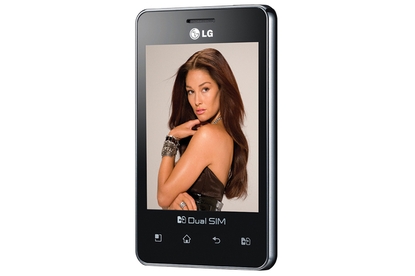 The Optimus L2 is one of the first dual-SIM Android phones to be released in Australia. The lack of Telstra Next G support is a shame, but the Optimus L2 will retail for just $119.

Dual-SIM phones aren't as popular in Australia as they are in some other markets across the world, but LG seems to think there is enough interest Down Under. The Optimus L2 is one of the first dual-SIM Android phones to be released in Australia and will retail for just $119.

The concept of a dual-SIM phone is simple, obviously allowing two separate mobile services to be used with a single phone. Though the days of carrying separate phones for work and personal use may be dwindling, a dual-SIM device does make sense for other reasons. LG specifically cites users who need to regularly make international calls as one example.

The LG Optimus L2 dual-SIM features a dedicated "hot key" to easily switch between SIM cards. The hot key is one of four touch-sensitive buttons that sit below the Optimus L2's display. In addition, LG says that each SIM card slot is colour coded so users know exactly which service they're using. Unfortunately, the Optimus L2 isn't compatible with Telstra's 850MHz Next G network, only supporting the 900MHz and 2100MHz 3G bands used by Optus and Vodafone in Australia.

Dual-SIM capabilities aside, the LG Optimus L2 is a fairly standard, budget Android phone. Despite its low price tag, however, the L2 fits into LG's "L-Style design" principle. This concept is based around five aesthetic elements — a modern square-style that aims to provide comfortable grip, a "floating mass" screen for a slimmer look, a more intuitive arrangement of menu keys, metallic accents and a slim shape.

Most of these elements are purely marketing speak, but we can only hope it translates into a good looking and well designed handset. The Optimus L2 weighs just 110g and isn't too thick at 11.9mm, so those after a smaller smartphone may be interested.

The LG Optimus L2 won't blow you away in terms of specifications, but it doesn't really need to at this price. It has a 3.2in capacitive touchscreen with a rather low resolution of 320x240, which means it won't display crisp text like more expensive models. The L2 is powered by an 800MHz processor and 1GB of RAM. The phone will initially ship with the 2.3 "Gingerbread" version of Google's Android operating system.

LG hasn't stated whether the Optimus L2 will receive a software update to a newer version of Android. However, given its budget price and the fact that this is somewhat of a niche device, we wouldn't be holding our breath. Other features of the LG Optimus L2 include a 3.2-megapixel camera and a 1500mAh battery that should get you through a full day of use.

The Optimus L2, along with the rest of the Optimus L-Series range, will be marketed in Australia by TV personality and former Miss Australia Erin McNaught.

The dual-SIM Optimus L2 will be available in August through Boost mobile for $119.