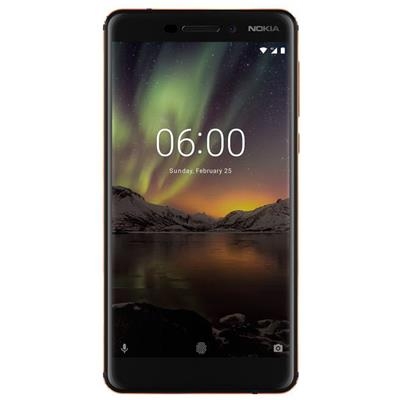 This handset is a double-down by HMD on everything that worked in the 2017 model combined with a number of key improvements.

The original, reimagining of the Nokia 6 released last year, when HMD resurrected the once-mighty brand with a solid, polished but ultimately conventional mid-tier device. Now, a year onwards, the company are refreshing the Nokia 6 again.

The phrase ‘leaner and meaner’ probably doesn’t do it justice - this handset is a double-down by HMD on everything that worked in the 2017 model combined with a number of key improvements that shore up the new Nokia 6 up in areas where it didn’t quite come together so cleanly last time around.

What you’re getting here is still a $399 phone, to be sure. However, at this stage and at that price-point, the Nokia 6 might just be the best out there.

Read more Nokia 8 Sirocco review: A unique flagship that's more of a mutation than a market-leader

Read more MWC 2018: Everything Announced At The Nokia Press Conference

You can buy the Nokia 6 on Amazon here.

For obvious reasons, the first thing you’ll notice with the new Nokia 6 are the similarities it has with the older Nokia 6. Sure, when it comes to form-factor, it’s a little taller and little thicker. However, in broad strokes, it’s pretty much the same design. This even extends to the camera hardware, with the the 16-megapixel f/2.0 rear more or less the same as that found in last year’s model. Like its predecessors, the new Nokia 6 been carved out of a solid aluminum block and its got a really polished-yet-durable feel factor going for it. In contrast to a lot of the other handsets operating in the same price range, it feels positively premium to hold and use.

Regardless, the second thing you’ll probably pick up on here are the differences between this year’s Nokia 6 and its 2017 counterpart. Most of these are internal but a few can be seen from the outside. The new Nokia 6 opts for charging via a USB Type-C over the Micro USB port rocked by the old one. Admittedly, this is a small detail but it does help the handset come across as more modern. The new Nokia 6 has also been buffed in the specs department, boasting both more RAM and a beefier processor than last year’s model.

While the hardware tied up in the Nokia 6’s camera itself hasn’t really been changed, the software powering the experience has undergone some fairly significant tinkering. The new Nokia 6 supports the ‘Bothie’ camera mode introduced in the Nokia 8 and also a new Pro control mode that allows for more nuanced control over ISO, white balance and shutter speed. More on that later.

Unfortunately, one area where the Nokia 6 does fall a little short is the display. It’s only FHD and bright enough for the most part. However, given the size of the phone, it’s a shame the brand haven’t moved to the 18:9 aspect ratio. Even with the arrival of the all-glass Nokia 8 Sirocco, it feels like HMD and Nokia are still yet to fully-embrace the war on bezels.

Still, the above is far from from a deal-breaker. When it comes to form-factor and design, the Nokia 6 makes the grade with nothing less than flying colors. It’s honestly a little difficult difficult to name another other brands offering the mid-tier buyers the level of polish and quality that HMD are here.