Nokia Lumia 900 review: The Lumia 900 is without a doubt the best Windows Phone on the market The Nokia Lumia 900 is without a doubt the best Windows Phone device on the market. We love the superb design and build, the excellent performance and the slick look and feel of the Windows Phone OS. However, the Lumia 900 has a number of flaws that detract from its overall appeal when compared directly against its competition.

The Nokia Lumia 900 is a critical release for both Nokia and Microsoft. The former is aiming to turn around dwindling market share, while the latter is trying to compete with popular iOS and Android rivals. In the Lumia 900, Nokia has produced the best Windows Phone device ever, but is it enough to steal the limelight away from Apple and Google?

The Nokia Lumia 900 is basically a larger Lumia 800. The Lumia 800 is one of the best looking smartphones on the market and the Lumia 900 is no different. The phone is again constructed from solid polymer, the same material often found in ice hockey helmets. The Nokia Lumia 900 will be available in black, white, cyan and magenta colours, though its not yet known what colour variants will be sold in Australia.

Like both the N9 and the Lumia 800, the Lumia 900's polycarbonate casing is coloured all the way through in the manufacturing process so scratches, dents or marks from everyday use will not show up. The construction and build quality of the Lumia 900 is first class with no creaks, rattles or moving parts. Combined with a weight that is light enough not to be a burden, yet heavy enough to provide a premium feel, the Lumia 900 is the near perfect balance of size and weight. In a mobile world where many smartphones look like identical plastic slabs, the subtle curves and vibrant colours of the Nokia Lumia 900 are a welcome breath of fresh air. This is without doubt one of the best looking and most elegant smartphones on the market today. 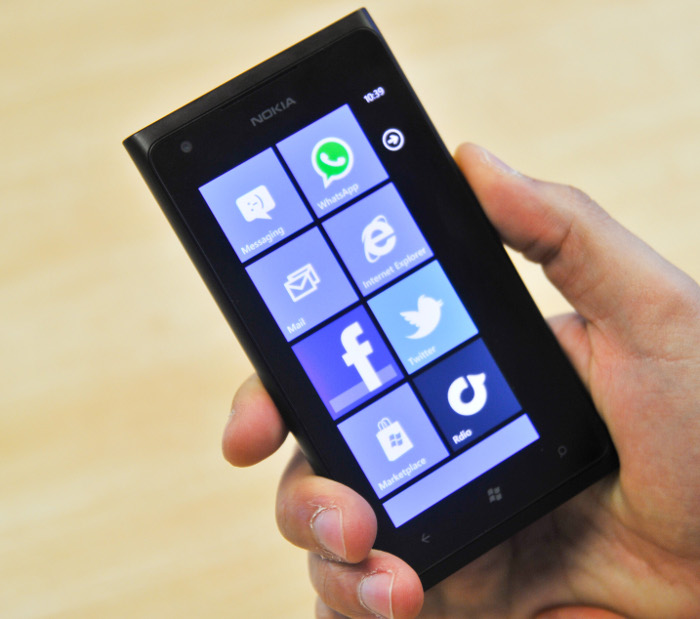 The Nokia Lumia 900 is a typical Windows Phone, so it has three backlit and touch-sensitive buttons below the screen (back, Windows and search) along with four physical buttons on the right side: volume up/down, screen lock/power and a dedicated camera key. Like all other Windows Phones, long pressing the camera button when the phone is locked will immediately jump into the camera app ready to take a photo.

One aspect of the Lumia 900's design that has changed is the SIM card slot. On the Lumia 800 this was concealed via a plastic flap, but Nokia has opted for a different set up this time around. The SIM card slot on top of the Lumia 900 needs a small pin to pry open (exactly like the iPhone), while the micro-USB port is now unconcealed. We much prefer this design as you no longer need to awkwardly dig your finger to open a flap when you need to charge the phone.

The Nokia Lumia 900's biggest improvement over the Lumia 800 is its display. It now has a large 4.3in screen compared to the much smaller 3.7in panel on the 800. The Lumia 900 uses the same AMOLED display and ClearBlack technology that provides better blacks and improved outdoor visibility, but the resolution of 480x800 has not changed. The Lumia 900's screen is both bright and clear, but it doesn't display text as well as many of its rivals. This is particularly evident in the browser, where text is difficult to read unless it's zoomed in. 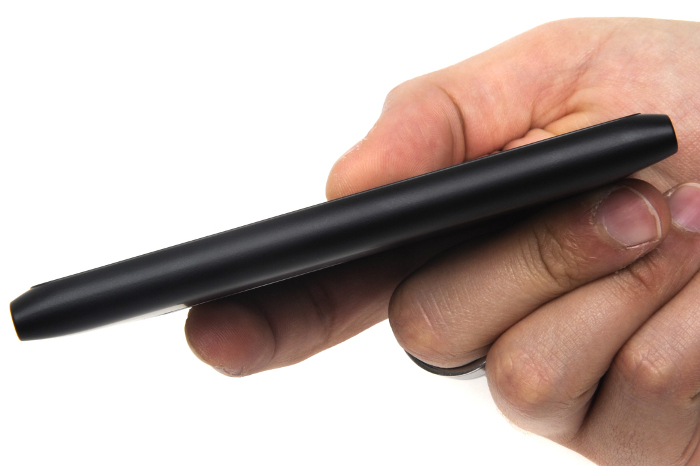 Windows Phone: The good, the bad and the ugly

Using the Lumia 900 is an almost identical experience to every other Windows Phone on the market. This isn't such a bad thing as the Windows Phone platform is slick, modern, user friendly and smooth. We didn't experience any lag during general use, applications opened swiftly with no delay and most core tasks are easy to access and use on a daily basis. As Windows Phone devices are very similar when it comes to software, you can read our full review of the Windows Phone 7.5 operating system here.

Due to Microsoft's strict hardware and software requirements, vendor-included apps are the main differentiators between Windows Phone devices. One of the biggest selling points for Nokia's Windows Phone devices is Nokia Drive, a free turn-by-turn GPS navigator. The app is completely free and allows you to install street maps for most countries. Once installed, you can use the map without the need for a mobile Internet connection. The Australian map we downloaded was a 200MB file, while the English UK voice was 4.1MB. The Drive app is basic, but it's easy to use and effective. The larger screen of the Lumia 900 really makes a difference during navigation compared to the Lumia 800. The Lumia 900 also includes a free 25GB of SkyDrive storage, but this is a feature available on all Windows Phones, not just Nokia ones. 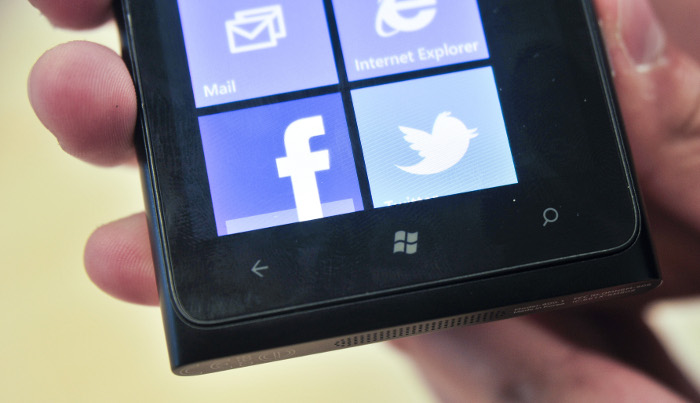 Nokia Music and Nokia Maps are other apps that are available on the Lumia 900. We particularly like the MX Radio feature in the music app that allows you to listen to free music streams sorted by genre, and we prefered to use Nokia Maps over Microsoft's own Bing Maps solution. A cool feature in Nokia Maps is the ability to quickly access popular places around your current location. You can view a basic "about" description from TimeOut and WCities, explore places by specific category and even see nearby places appear on a map around you, clearly denoted by a categorised icon.

Disappointingly, the Lumia 900 offers less than stellar mobile Internet performance. The browser feels slick and has all the features we've come to know and love on smartphones including pinch to zoom capability, smooth scrolling (still far better than any Android phone) and the ability to open multiple tabs. However, it loads Web pages slower than the Galaxy Nexus and the iPhone 4S when compared directly over the same Wi-Fi network, it doesn't render pages as well as most of its rivals, and opening a new tab is buried three screen taps deep in the settings menu. In addition to text being hard to read unless zoomed in, the Lumia 900 also struggled to display some fonts on various Web sites we frequent. 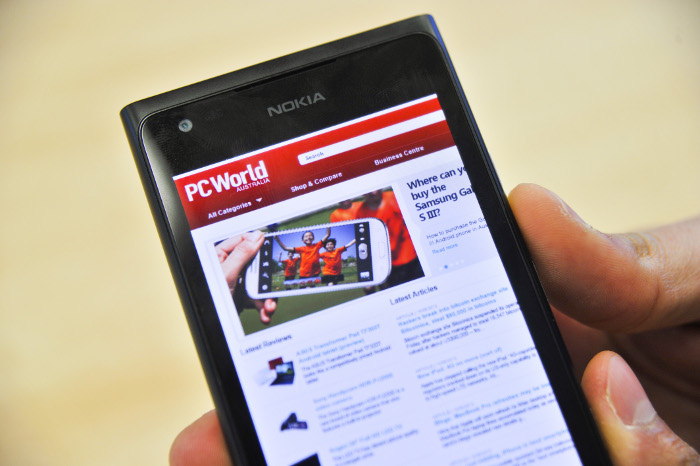 Speaking of the Galaxy Nexus, the Lumia 900 (just like the 800 before it) shares an issue with Android's flagship: the volume of its speaker is quite low. This is particularly telling when using the hands-free speakerphone during a phone call, but it also affects the volume of ring tones, too. Even with volume turned all the way up, we often missed notifications when the phone was in our pocket.

The Windows Phone platform has plenty of popular, third-party applications like Facebook, Twitter, Skype, WhatsApp, Rdio, eBay and Evernote. However, the number of apps is low when compared directly with its rivals, Apple's iOS platform and Google's Android OS. We have no doubt the Windows Marketplace will satisfy most users and will only continue to grow, but at this stage it is somewhat limited compared to its competitors.

Perhaps the biggest disadvantage of the Windows Phone platform is the reliance on Microsoft's Zune software for file management. While the same criticism can be aimed at the iPhone and iTunes combination, at least Apple has iCloud to fall back on. Windows Phone has no such backup option that will save important content like your messages, call logs, settings and app data. Thankfully, Microsoft's SkyDrive service does work well for documents and photos and $11.99 per month for an unlimited ZunePass subscription is a nice option if you regularly listen to music on your phone.

The Nokia Lumia 900 has an 8-megapixel camera with a dual LED flash and a Carl Zeiss lens. The image quality won't match the quality of the unrivalled Nokia N8 but the Lumia 900 definitely takes a decent photo, provided you are backed by good lighting. Image noise is an issue with many of our test photos appearing grainy and washed out, though the level of detail is sharp. The camera doubles as a 720p HD video recorder and will record at 30 frames per second. 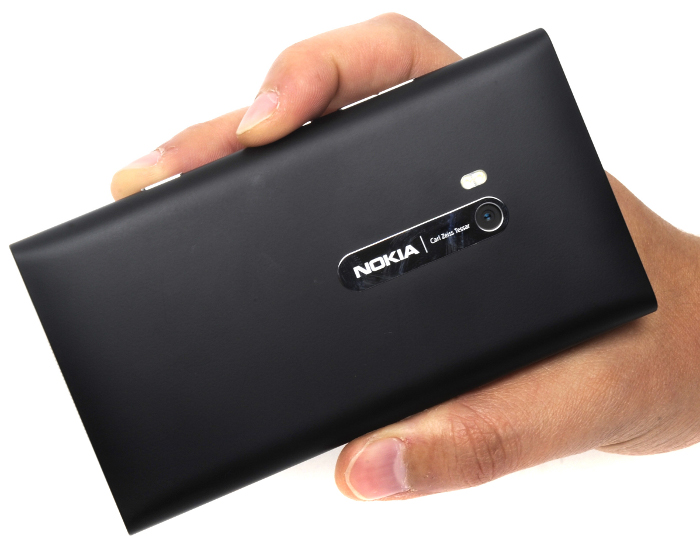 The Nokia Lumia 900's polycarbonate design means the phone doesn't have a removable battery, uses a micro-SIM card rather than a full-sized one and doesn't have a microSD card slot for extra storage. The Lumia 900 only has 16GB of internal memory, which could be an issue for those who desire lots of storage space.

The Nokia Lumia 900's battery life is about average for a modern day smartphone, so you should be able to use it for almost a full day before needing a recharge. With heavy use we managed to drain the battery well before the end of the day, though battery performance will depend on a number of factors including usage patterns and 3G network performance and coverage.

The Nokia Lumia 900 is available in Australia through Optus. The Lumia 900 can also be purchased outright through Australian online store MobiCity.