This LED light bulb hooks up to your Wi-Fi, and can change to any colour 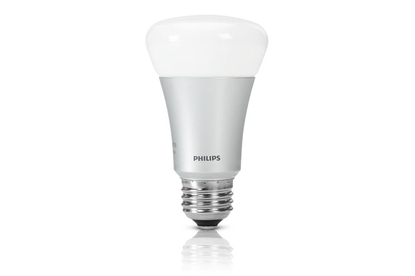 Philips’ Hue light bulbs are a glimpse into a future where even your house is ‘smart’. Entirely controlled over your smartphone or tablet’s Wi-Fi, they can be programmed to suit your daily habits. They’re not a perfect replacement for existing incandescent bulbs, and they’re definitely expensive, but the concept is laudable.

The Philips Hue is one of a few ‘connected’ light bulbs that will become available in Australia and around the world in 2013. It combines a powerful red-green-blue-white LED lamp with a low-power Wi-Fi mesh network, all inside a standard-size light bulb.

The concept is simple, giving you the power to change the brightness and colour of the light with an app on your smartphone or tablet, wherever you are around the house or around the world.

The Philips Hue introduction pack that we received included three Hue bulbs and a Hue network bridge. There’s also power and network cables for the bridge, and an instruction manual that guides you through the system’s initial setup process.

Each Hue light bulb measures 110mm long, with a maximum bulb diameter of 62mm. This is reasonably long, which may cause issues with some light fittings — the bulb itself only just fit into the light fitting of our ceiling-fan-light combo, which has the light fitting aimed horizontally rather than vertically and uses a spring-loaded frosted glass cover over the bulb.

The Hue bridge is the automatically-networking glue that holds the entire lighting system together — you hook it up to power and your house’s Wi-Fi router, effectively bridging the connection between your mobile device, the Internet, and the Hue bulbs. The entire process is simple, and the mobile app tells you exactly what you need to do to get everything working — which really isn’t very much.

After hooking it up to the router that specifically handles Wi-Fi on our home network, the process worked with no further issues. This is an intriguing issue, given we’ve had a Sonos mesh network — very similar to the ZigBee mesh network concept — operating perfectly under these conditions before.

Philips Hue: Apps and ease of use

The Philips Hue system can be controlled via smartphone or tablet apps for iOS or Android, via the Apple App Store and the Google Play Store. iPhones 3GS and newer, and iPod touches 3rd generation and newer, are supported, as are all iPads including the mini. The Android app should support any smartphone or tablet running 2.3 Gingerbread or newer. There are also community apps which add extra functionality.

Load up the Hue app, and it’ll search for the Hue bridge. Once it’s found, the mesh network will communicate with all the Hue lamps within the range of that bridge, giving you access to control their colour temperature and brightness. This is the basic functionality that you need — the ability to dim and brighten individual lights, and to change their colour to create the mood you want. If you register your Hue network on Philips website, you can control your lights wherever you are, even when you’re not on your home’s Wi-Fi network.

Everything else within the Hue apps is an extra. You can choose from various scenes for your lighting — a bright, warm Sunset mode, or a dim, warm Relax mode, or a pulsing cool blue Underwater mode, or several others. You can draw from any of these presets, emulate the colours in any photo from your smartphone or tablet’s picture gallery, or create your own light recipes with a few sliders and colour pickers. Philips’ default light recipes are good, although they tend to quite warm colour temperatures.

You can control each bulb individually, or all at once, changing colour intensity, colour temperature, and brightness as you like. In our weekend of testing we really didn’t stray too much from the standard colour profiles — Concentrate for most of the evening, Relax for late at night — but the potential for strobing a rainbow through your living room at midnight to annoy your house-mates does sound appealing. If you hit the light switch, though, the bulb resets to the standard daylight white and full brightness.

The most interesting aspect of the Hue apps has to be the alarm and timer modes. If you’ve got a modern smartphone, chances are you use the alarm on it to wake up every morning. If you set an alarm within Hue, you can make sure the lights are on — slowly brightening from off to full power — as you’re waking up in the morning. You can set up a timer for them to dim over an hour or two as you’re getting ready to sleep at night. Want to know when you’ve hit half an hour of exercise? Have the lights flash a different colour when time is up.

The new Hue app, recently updated to version 1.1, also introduces geofencing — once you travel within a certain distance of your home, the lights come on, and turn off when you go. It’s these kind of minor extras that make the Hue so versatile, and while you’re going to have to embrace them to get the best value out of the system, we really think there’s a lot of potential here to fully automate the lighting within your home or office.

The light output of the Hue is quite directional, more so than a traditional clear or frosted incandescent light bulb — this makes it less than ideal for non-vertical ceiling or floor light fittings. It’s not as tightly focused as a downlight, but it’s definitely not as diffused as an Edison bulb.

In our minds, the ideal light fitting for the Hue bulb would be a vertical ceiling light fitting — with the bulb pointing downwards, and a glass cover diffusing the Hue’s light output over a wider area. If you wanted to use the Hue in a floor or table lamp, we’d recommend a lamp cover that has a vertical opening and a translucent shade, like this.

Directionality aside, the quality of the Hue’s light output is wonderful. If you’ve been thinking about trading up from your energy-sucking incandescent lights, which have been off the market for a couple of years now — more’s the pity — we would have only a few qualms in recommending the Hue.

Everyone knows that the current energy-saving darling, the compact-fluorescent light (CFL), has a few problems — sickly, unflattering light, and long warm-up times. Whether they cause headaches or not is up for debate, and more expensive CFLs are actually getting pretty good at replicating the light output of incandescent bulbs, but even the best CFLs have a maximum colour rendering index of around 80.

What you want is the closest possible number to 100, which is the colour rendering ‘look’ of daylight on a sunny day. LED bulbs, including the Philips Hue, are usually above 90 at the 2700K warm white standard. Add to that a faster warm-up time — 60 per cent light output within two seconds, and full light output a few seconds after that — and the Philips Hue is far more attractive than an equivalently-bright CFL.

The main issue that the Philips Hue has its low overall brightness. LED lighting has come a long way in the last couple of years, making huge leaps and bounds in brightness and high-lumen efficiency, but there’s still a little distance before it can match the amount of light that a single burn-power-at-any-cost incandescent bulb can produce. Philips says the 8.5 Watt Hue lamps produce 600 lumens, and in reality this is similar to a 50 Watt incandescent bulb or a 13-15 Watt CFL.

Coming from a 100 Watt incandescent bulb in our ceiling light, the difference in brightness was instantly noticeable. The Hue is perfectly bright enough once your eyes adjust to it, but in a house full of other bright lights — rooms with four or six downlights, far too many incandescent bulbs, and halogen bathroom lighting — walking into a room with a single Hue, whatever colour it’s set to, takes a second for your eyes to adjust.

If we had a dual-lamp ceiling light fitting in the room we tested the LED bulbs in, we’d happily screw in a couple of Hue lamps and throw out the incandescents. As it stands, if you want a bright room, to the standard we’ve become accustomed to, you’ll need at least two Philips Hue bulbs in either a single fitting, or with one in a strategically placed lamp.

Also notable was the fact that the physical dimmer switch didn’t work — after a short dead zone, the Hue lamp simply turned off. If you want to dim the lights, you’ll need to use the app and control everything from there. In reality, it’s easiest just to leave the light switch turned on 24/7 with the dimmer at full power, and turn the lights up, down, off, and on from within the app as well.

All these limitations have to be considered against the fact that each Philips Hue light bulb is going to be nine times as energy-efficient as the light bulb it replaces. If you take out a 50 Watt incandescent bulb from a lamp, and screw in a Hue, you’re using one ninth of the power at the same light output. And the bulbs last for 15,000 hours, about ten times as long as the best incandescents. This is a huge advantage of LED lighting, and of the Hue, that can’t be ignored.

The Philips Hue lighting system is expensive. The mandatory starter kit is $249.95, and each extra bulb is $69.95. This is a lot of money, even against the already-high benchmark set by high-efficiency LED bulbs already on the market. There’s no question that at the moment, it’s restricted in usefulness to the early adopters and tech-savvy users that want to play around with geofencing and creating cool light effects and setting up sleep/wake timers.

Nonetheless, we think that Hue is great. If you like the idea of a house where you never have to touch a light switch, that reacts to the time of day, and that tells you when to sleep and wake up, Philips’ Hue bulbs are the best way to make that happen.

The Philips Hue introduction pack and individual bulbs are available exclusively in Apple Stores in Australia.