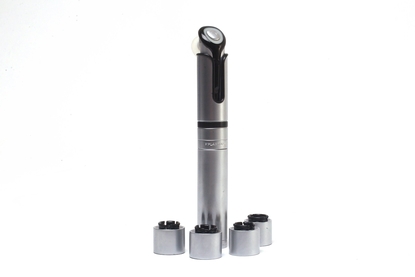 With its many options for charging offering longer battery life, the Discovery 640 is ideal for those constantly on the move

The Plantronics Discovery 640 bluetooth headset is aimed squarely at road warriors, who will appreciate the convenience of the many charging methods included in this package.

In addition to the headset, Plantronics include a heap of extras in this package, most notably a pocket holster. The idea behind this is that when the headset is not being used, it can be slid into the pen-shaped holster which can then be clipped onto a top pocket. Additionally, a small battery charger holding an AAA battery can be clipped onto the holster itself, in order to charge the unit. We like the convenience this idea offers, but once the battery charger is clipped onto the holster, it does become quite big - around the size of a thick permanent marker. While the headset is in the holster, you won't have to worry about missing calls, as it will vibrate when a call is received, albeit rather softly.

While the headset offers 5 hours of battery life, around 2 full charges can be obtained from this holster/charger combination, allowing users just under 15 hours of talk time without having to charge the headset using AC power.

In actual fact, there are three ways to charge this unit. Firstly, an AC adapter is provided. You place the 640 into the holster, and plug the charger directly into the holder. Secondly, Plantronics include four small fittings which clip onto the base of the holster if you want to charge the unit using your phone adapter. The fittings allow you to use chargers from Nokia, Sony Ericsson, Siemens and Motorola. Finally, you can slip an AAA battery into the battery holder and charge it on the go. What all this means is that the Plantronics 640 is ideal for working professionals or people who tend to travel a lot. The downside is that there so many pieces and fittings, it is easy to get confused and they will be easily lost, which is why Plantronics have seen fit to include a rather large metallic carry case.

The 640 itself is tiny - perhaps the smallest headset we have seen and both looks and feels unobtrusive. Unlike other Jabra units, the Discovery 640 is small, discreet and can be easily tucked into a pocket if you wish. Plantronics has included three sizes of ear gels in the package, so the unit should fit snugly into your ear. An ear hook is also provided but we felt comfortable enough wearing just the gels. The 640 is designed exactly the way a headset should be - small, light and comfortable.

Answering a call is simply a matter of pressing the Call Control button once. The unit also supports rejecting calls. redialing the last number and voice dialing. While you can mute a call, this involves pressing both sides of the volume button and we found it difficult to do this with the headset on.

We had no complaints with the audio quality on this unit, and we could hear others clearly, outdoors and indoors. The volume level was also fine. The only criticism we would have is that call quality deteriorates quite rapidly as you move away from your mobile and is unusable at a distance of over 7-8 metres. Additionally, and somewhat surprisingly, we could not get the unit to recognize the silent mode on our phone. When it was ringing the headset did not vibrate or ring, although it did beep to indicate we missed a call.