A major facelift brings the interface of this fantastically reliable and easy backup solution in line with modern expectations. With a variety of free backup programs available, including those that ship with your operating system, R-Drive Image is a program I'd pay for. That's about as great a compliment as I can offer to a piece of software.

The reason is simple. In all the years I've been using the low-resource-consuming program (nearly 20), it's never failed once at its primary task of creating images of partitions or disks. Nearly every other backup program I've used has hiccupped in one way or another. In fact, I use R-Drive Image for backing up my backups and failing hard drives, where you may not get more than one shot at it.

This review is part of our ongoing roundup of the best backup software. Go there for information on competing products and how we tested them.

With version 7, a revamped interface makes the program even friendlier; the addition of file and folder backup fills the last remaining gap; and a new partition manager renders the program significantly more versatile. If the company ever rolls in its excellent R-Studio recovery software, the boot disk count in my repair kit will go down to exactly…one.

By far the most salient change in R-Drive Image 7 is the new interface. The old version was efficient, but dated in appearance. The new face is not only more modern looking, the workflow is likely a tad more intuitive for the average user. Below you can see the older version, as well as the new one, plus my personal favorite: the character-based Linux interface you can run from the boot disk. 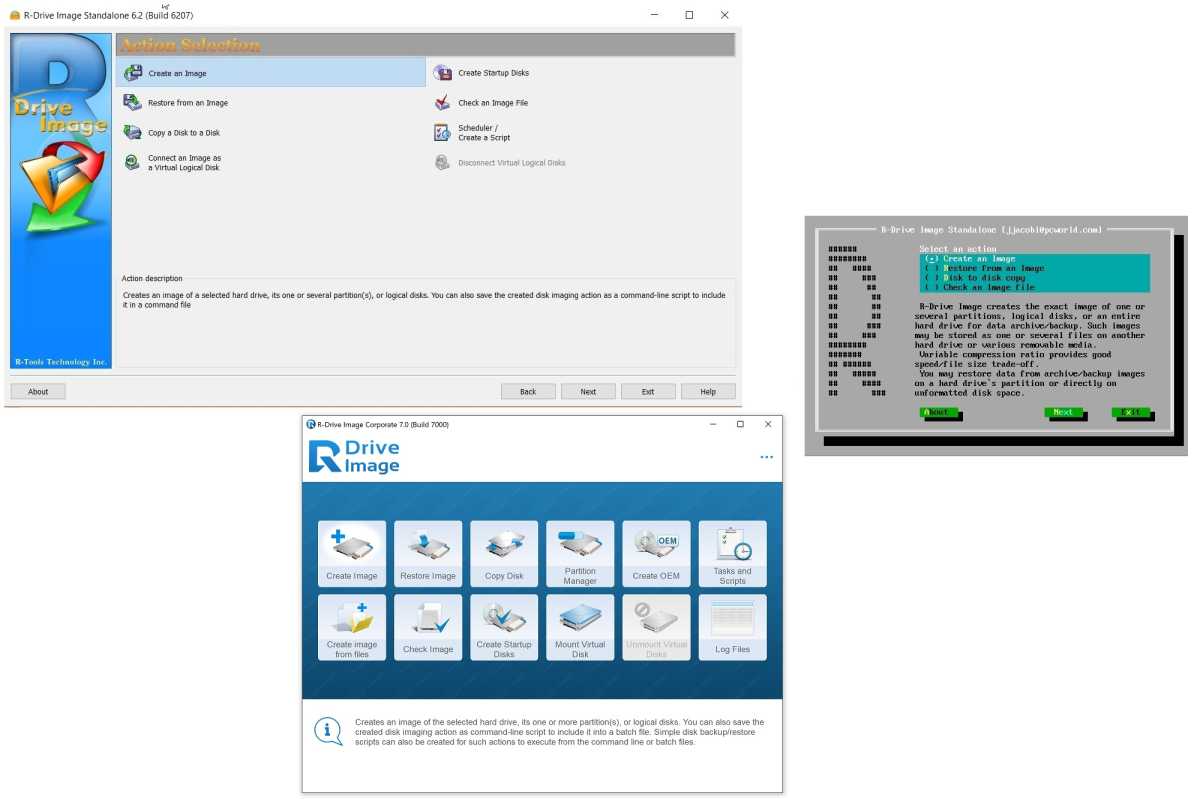 I use the DOS-like (Text Mode) interface partly out of reverence for the past, but also because it impresses IT customers looking over my shoulder. Alas, the new partitioning is only available from the bitmapped GUI. Honestly, I can't blame them for the omission, as it's likely a lot of work. But hey R-Tools, if you're ever bored….

R-Drive Image will create full (everything), incremental (all changes since the last image), or differential (all changes since the original full image) images. It will also verify them, copy disk to disk (cloning), and mount images as virtual disks that you can browse and recover individual files and folders from. It understands Microsoft's FAT (16/32), NTFS, and exFAT; Apple's HFS/HFS+, and APFS; as well as the Little and Big Endian variants of UFS1/UFS2 and Ext2/Ext3/Ext4 FS (Linux), and ReFS.

Other file systems are supported on a byte-by-byte (all sectors) basis with no preview or file-level access from within the program. R-Drive Image also supports hardware RAID (as single volumes) and software RAID: Windows, Apple, and Linux mdadm. You can save your images just about anywhere and to just about any media. The program even burns CDs and DVDs on its own. Don't laugh—optical media is still in widespread use for archiving. 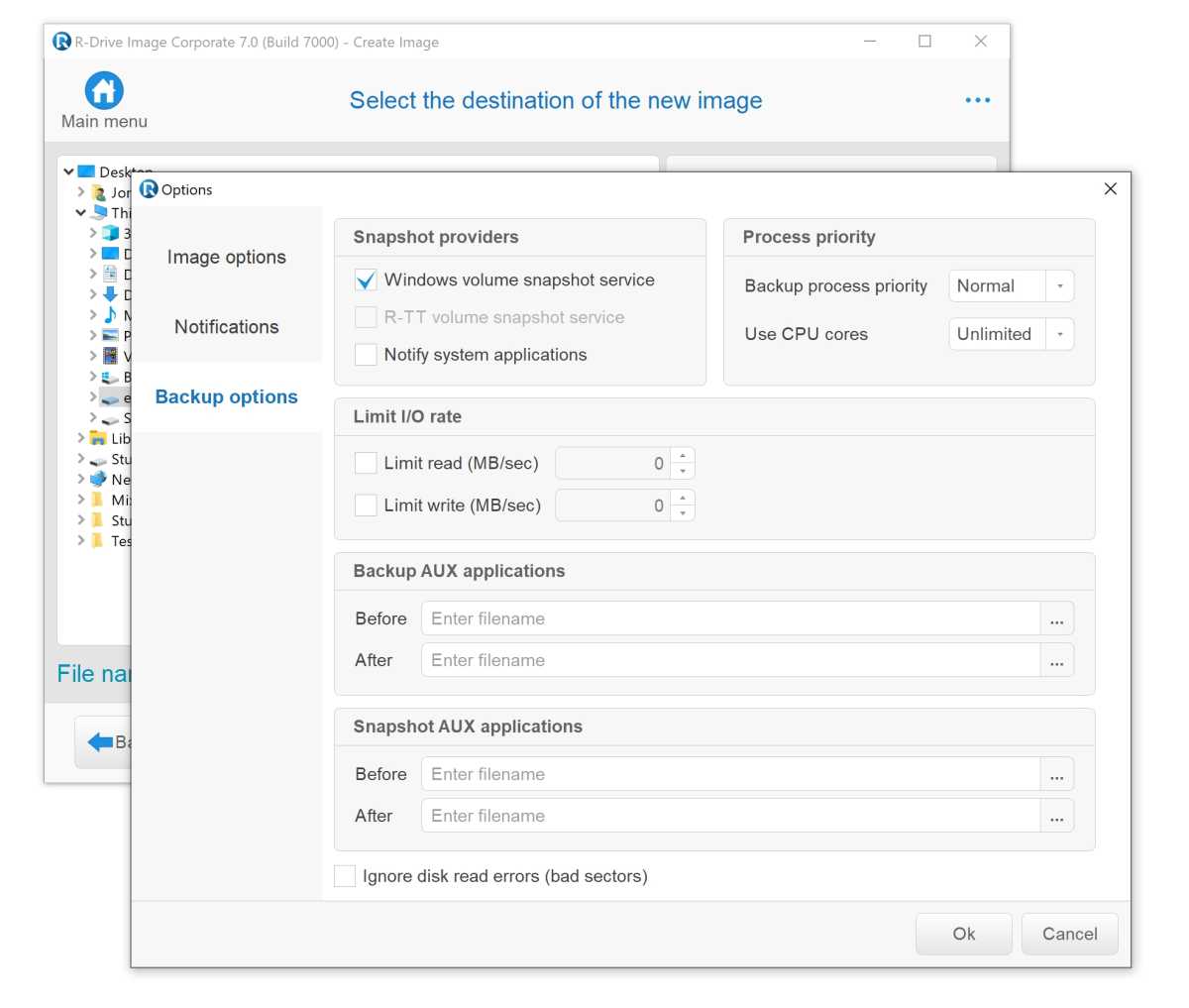 R-Drive Image offers every feature you can imagine for the imaging task. Select Ignore disk read errors if you're backing up a disk with issues for future recovery. Note that imaging failed disks can be a very lengthy process depending on the capacity of the drive.

Related features include email notifications on job completion; running programs based on the success or failure of the process; the ability to bypass file or disk errors and continue the job (great for recovering data); using Windows or its own proprietary shadow service (flushing and locking data); as well as task throttling (reduced CPU usage).

Scheduling is supported, and I truly appreciate that it leverages Windows existing task scheduler. Too many vendors add their own, re-inventing this wheel for no particularly good reason. It's also nice reassurance that there's no ongoing telemetry (communications between the program and the company) in play. Not to be paranoid, but that's something you might want to consider when offering low-level access to your data.

As mentioned, R-Drive also creates boot media that allow you to image and/or partition drives when you can't use Windows. Basically, it's a full Linux-based version of the software on the disk in addition to the aforementioned decidedly unsexy DOS-like, but nostalgic and fun, interface.

Probably the most useful new feature for all users is the ability to create image files from groups of files or folders. These aren't disk/partition images suitable for disaster recovery, simply your files and data in one in the same type of mountable container file. This allows for fast backup of your essential data and reduces storage requirements drastically in many cases. 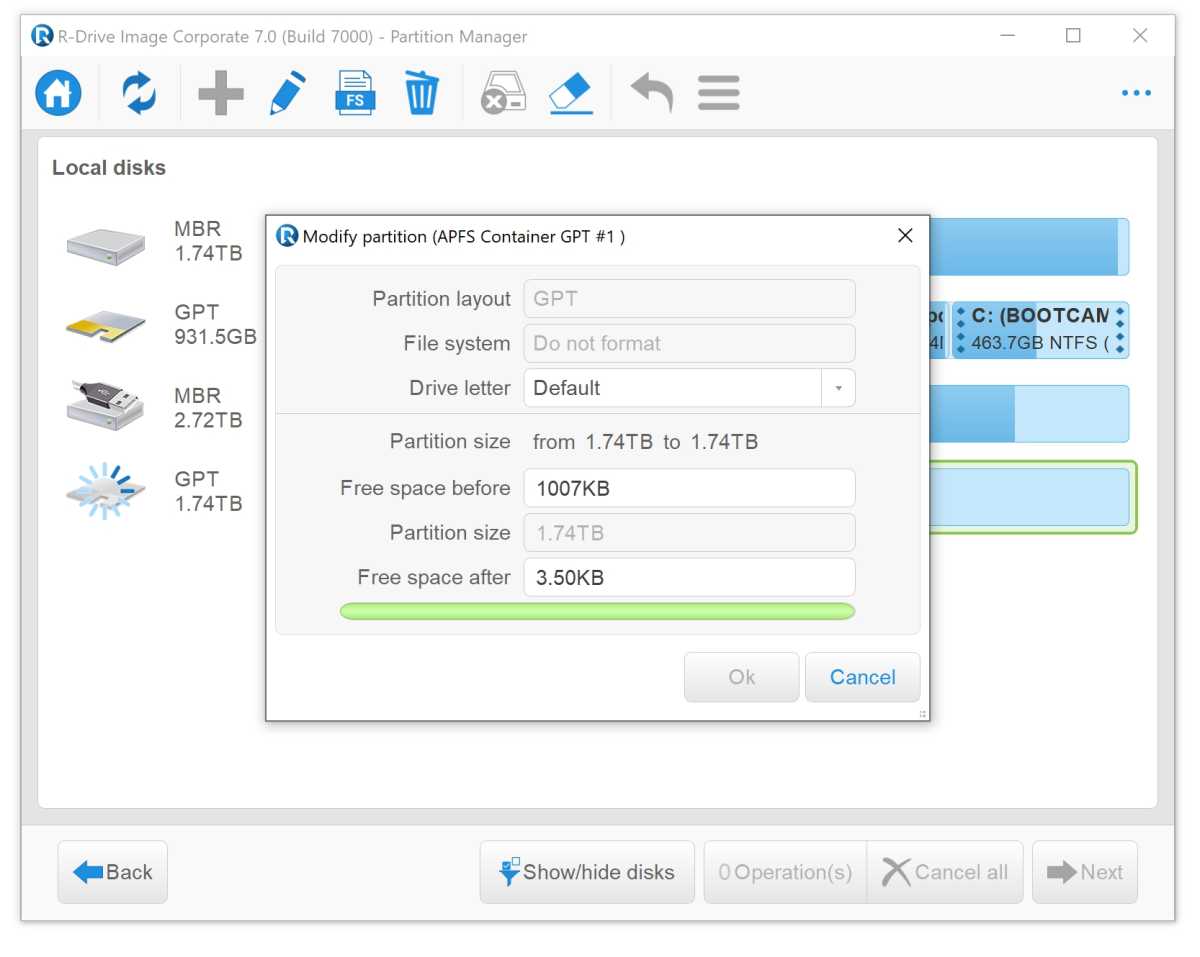 Next up is a partition manager, which allows you to delete, secure wipe, create, and re-size partitions without leaving the R-Drive Image interface. As mentioned, it's available only from the graphic interfaces (Windows and boot disk). Sigh.

Another welcome new feature is the ability to create images in the VMDK format used by Microsoft's Hyper-V. VMKD is easily convertible to Microsoft's older VHDX files which nearly all flavors of the operating system support.

Unfortunately, for most of you, VMDK creation is only available in the more expensive US$189 Corporate (tested), US$299 Technician, US$499 Commercial, and US$399 OEM versions (all were 20 percent off at the time of this writing).

I'd like to see R-Tools provide at least an ISO format for the US$45 standalone version. That said, I've never had an issue using R-Drive Image to mount one of its files. That function has been as bulletproof as the rest of the package.

Logs are now available directly from the user interface, file filtering is improved, and rotation is now supported in backup schemes. That last is, again, offered only in the pricier versions.

As I've said, R-Drive Image has been 100 percent reliable for me over the years. It can even skip bad sectors and copy what remains, though this can be an exceedingly long procedure if you have a lot of read failures. Aside from that, R-Drive Image is quite fast. It averaged around 90MBps reading, compressing, and writing 650GB of data to a SATA SSD in my testing, as well as to a network location.

Just FYI, R-Drive Image consistently over-estimates the time a job will take before the fact. Sometimes by a huge amount. No doubt it's assuming a worst-case scenario such as backing up non-compressible data to an old, slow hard drive. The reason for this caveat is so that you don't give up without pressing start and send me a nasty email about it. 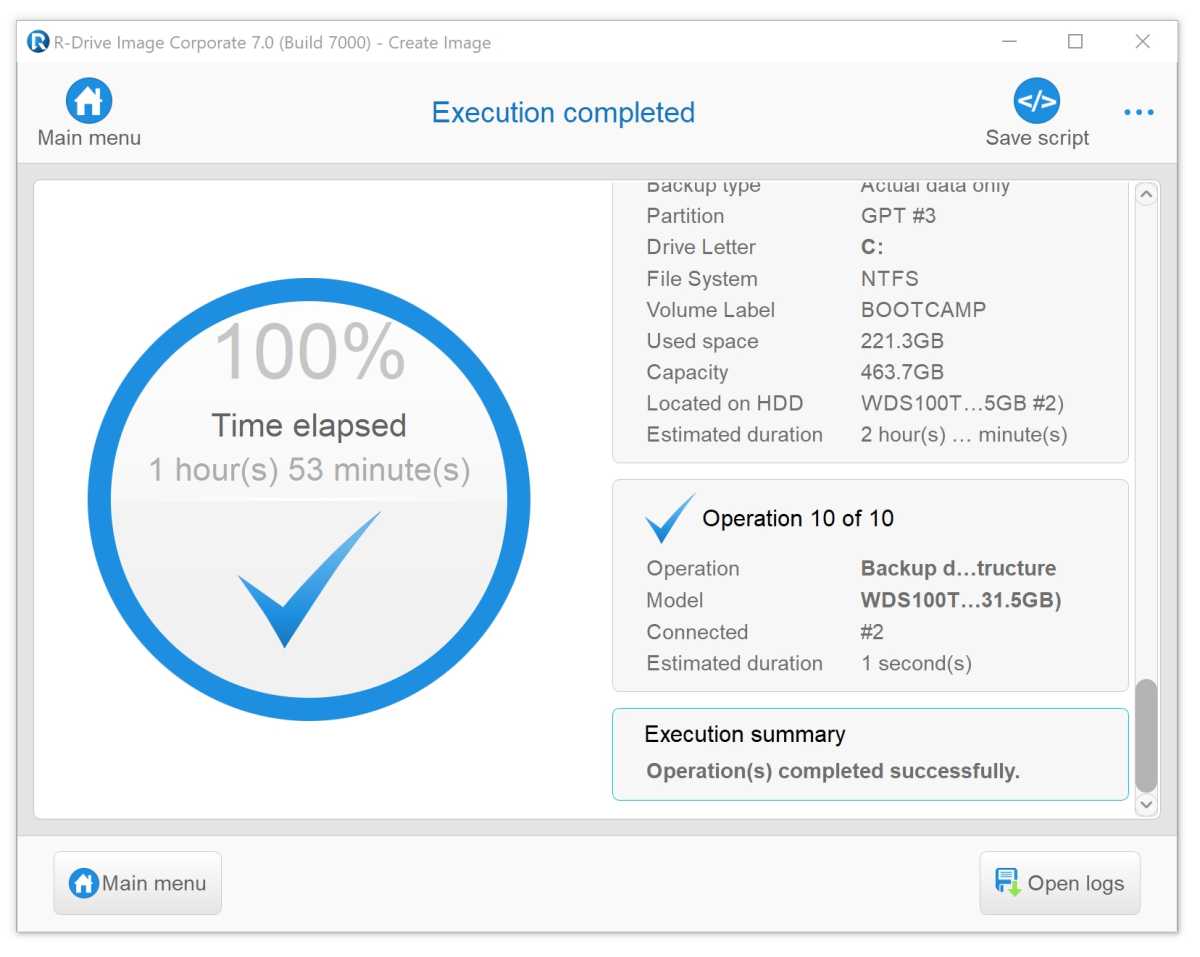 If you don't see this dialog, or something similar, it's probably your fault. I kid, but R-Drive Image has been extremely reliable for me over the years.

When I said R-Drive Image consumes few resources, I wasn't kidding. The minimum system requirement is only that said system be Intel-based. If you're using older hardware, R-Drive Image is by far your best bet. I wrote most of this article with a very large backup running on my 2015 iMac and forgot it was in progress. Note that the company's R-Studio supports Apple Silicon, so maybe there's ARM support in R-Drive Image's future.

Oddly enough, I did get my first-ever R-Drive Image error code (on the 7000 build) when selecting the modify function of the partition manager on an external, exFAT-formatted USB drive. But it was non-fatal, indicating superior error-checking, and R-Tools shipped me a fix (build 7001) almost immediately. Yes, the company is that dedicated and responsive.

My only other, extremely minor, gripe is that the program currently doesn't check for adequate free space on the destination disk. It will let you define a job and its destination, then fail when it runs out of space. I don't find this to be a big deal, as I always calculate the space required myself. But it's something that might affect less experienced users. The vendor agreed, and will likely add a warning in the near future.

As I've explained to many a new backup vendor with bugs in their program, peace of mind for this most important of tasks relies on total faith in the product. R-Drive Image has earned that faith.

Now friendlier; now nearly a one-stop solution; I was tempted to give it my first five-star rating. Best of the best. Enough said.