It lacks RGB lighting and Razer's highest DPI spec, but this mid-range mouse is still a great option for the price. 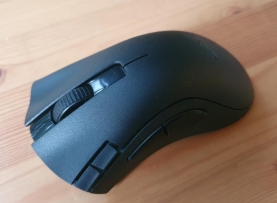 With a quick 14,000 DPI optical sensor, comfortable design and long battery life, the Razer DeathAdder V2 X Hyperspeed is an excellent mid-range wireless gaming mouse. It's also highly suitable as a productivity mouse thanks to its dual connectivity options and lack of RGB lighting. The upshot is you can segue between a gaming session and the boardroom in an instant.

Of course, with no RGB lighting, it's not the flashiest device, and may not appeal to hardcore gamers wanting an all-out RGB experience. It costs US$59.99 (AU$109), which isn't cheap, but considering its versatility, it could save you spending on two separate mice.

The DeathAdder V2 X Hyperspeed has a base weight of 2.78 ounces (79 grams) and increases to 2.89 ounces (102 grams) with a battery added, placing it in the mid-weight category for gaming mice.

There are seven programmable buttons, and everything is orientated for right-handed users. You get two main left and right buttons; two more on the left-hand side where your thumb sits; and two smaller buttons that cut into the far left side of the main left button. The center mouse wheel rounds out the list.

Even after extended use, the Death Adder V2 X Hyperspeed remains extremely comfortable. Its contoured, high-arched form nestled into my palm effortlessly, even without the rubberised side grips that you'll find in the step-up Razer V2 models. There's also plenty of room in the middle and at the far end to accommodate claw and fingertip grips. 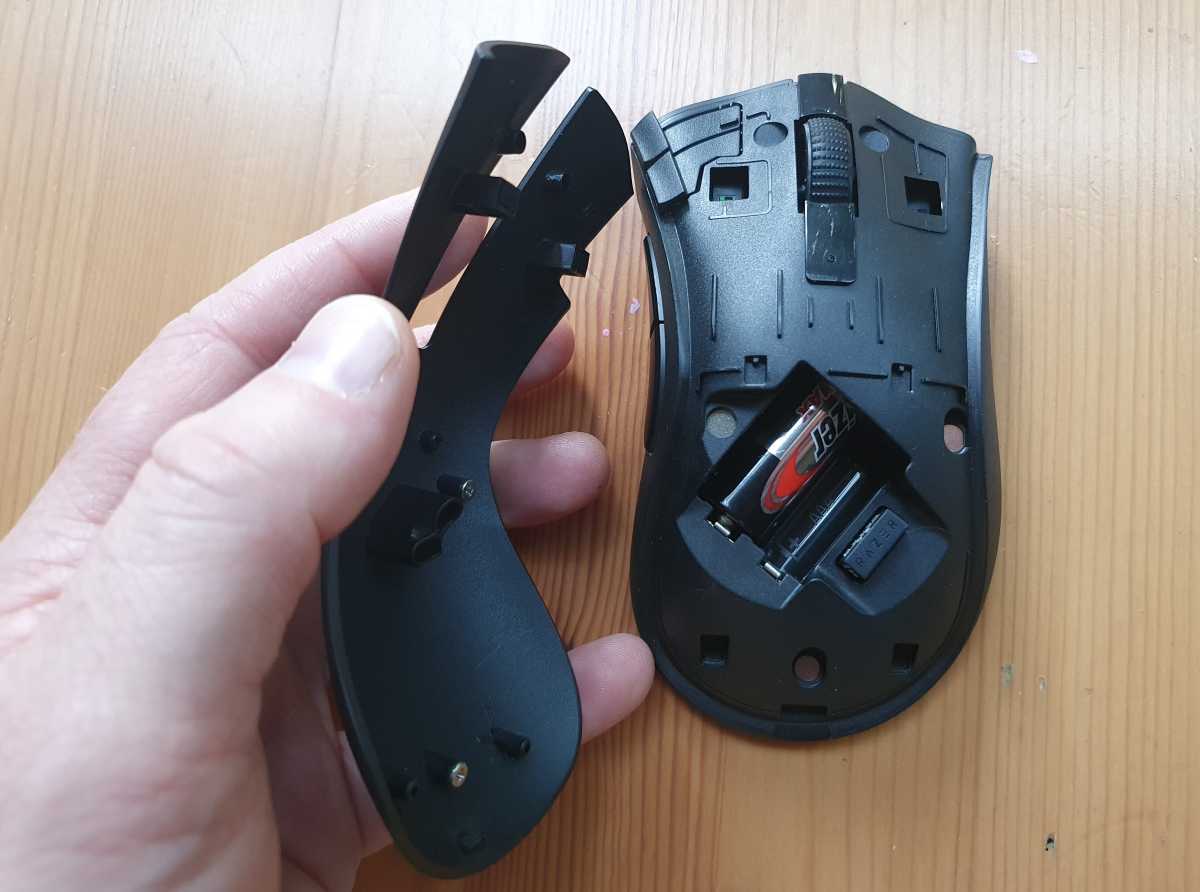 Remove the top of the DeathAdder V2 X Hyperspeed to insert either an AA or AAA battery. Image: Dominic Bayley/IDG

Razer has made changing the batteries super easy. Just by slipping my thumb into the groove at the back, the whole top section unclips easily. Inside, Wi-Fi dongle and battery slots are neatly arranged. Our review unit came with a single 1.5V AA battery, but there's also a slot for an AAA battery, which is highly convenient if, like me, you have a drawer full of extra batteries.

You'll want to protect the removable top while it's off, because it does feel quite flimsy without the structure and stability of the unit underneath it. Once you're finished swapping batteries, the top clicks back into place again without any fuss.

Since the Razer DeathAdder V2 X Hyperspeed supports dual connectivity—wireless connection via its 2.4GHz dongle and Bluetooth, too—it's highly useful for both gaming and work.

In regards to gaming, being the mid-range option in Razer's line-up means the V2 X Hyperspeed doesn't come with the most powerful 20,000 DPI optical sensor. Still, at only 14,000 DPI it's not underpowered either. It proved to be a decent performer in fast-paced games like Metro Exodus, where it was almost always quick and responsive. Tracing was also very accurate.

However, I did find that in some of my longer mouse movements—like when I had to quickly move all the way to the left or right of the screen to spin or face approaching foes—it performed a little slower than some more premium mice I've tested.

The buttons, which feature second-generation Razer mouse switches, registered clicks quicker and louder than some other gaming mice, including my old Razer Diamondback, which is much heavier and denser, and has a lower profile.

Using Bluetooth, the V2 X Hyperspeed is a little slower than when connected over Wi-Fi, but it's still fast enough to perform adequately in games. Switching between the Wi-Fi and Bluetooth modes is as simple as flicking a button on the mouse's underside.

In terms of AA battery life, the Razer DeathAdder V2 X Hyperspeed is rated to last for up to 235 hours when used in Wi-Fi mode and 615 hours in Bluetooth mode. This is a decent length of time for a single AA battery. 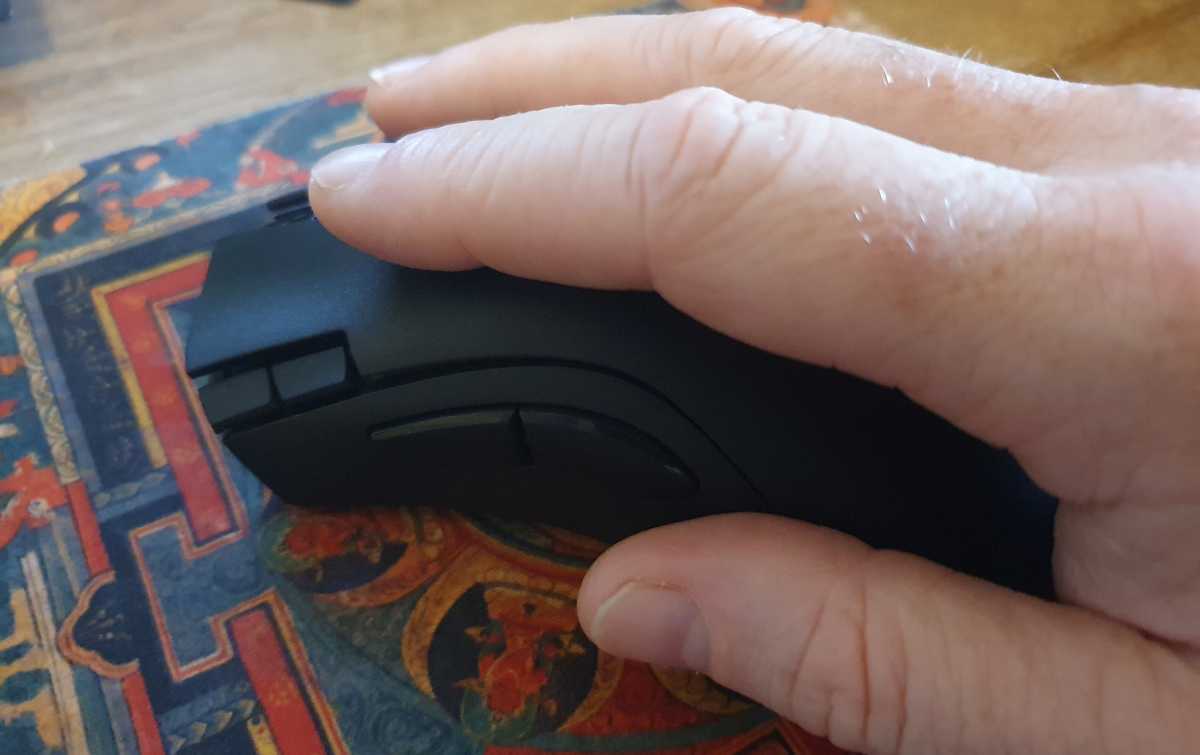 Even after hours of extended use, the DeathAdder V2 X Hyperspeed remains comfortable. Image: Dominic Bayley/IDG

Even though there's no RGB lighting to program, there are still plenty of options in Razer's Synapse software to tailor the DeathAdder V2 X Hyperspeed to suit your preferences. For example, you can change the sensitivity of the optical sensor to make it super-sensitive for fast-action games, or reduce its sensitivity for detail-oriented productivity work.

Assigning individual commands to its seven buttons proved extremely useful in games like Assassin's Creed where I was able to map weapons onto individual buttons. It also proved highly useful in MMOs where you sometimes need to cast multiple spells quickly.

Synapse also has a neat feature that allows you to assign a mouse button to switching profiles with one simple click. I found this to be a very useful feature that eliminated the trouble of reassigning keys between games.

Despite not having the fastest Razer sensor, the Razer V2 X Hyperspeed is still suitable for fast-paced gaming. Its dual connectivity options and lack of flashy RGB lighting make it a versatile mouse that won't embarrass you if you're doing a business presentation in front of old-school corporates types. But of course, if you're looking for a hardcore gaming mouse, the lack of RGB might be a problem.