Razer Phone Cooler Chroma review: It enrages me that this even exists

Every now and then a product comes along that is so ill-conceived it boggles the mind. Not every product is for everybody, but this product is for nobody. It's at least well-built and does indeed cool your phone, but the laundry list of downsides should preclude anyone from even considering a purchase.

We've all been there. You're busy playing a game on your phone (right by a power outlet, of course) and you're thinking, How is anyone going to know I'm a gamer if my phone isn't blasting RGB lighting out the back? How can I expect someone walking by to realize I've spent hundreds of dollars on predatory micro-transactions and in-app purchases if my phone doesn't sound like a frickin' jet engine?

Finally, you need suffer no longer. Razer has got your back…or rather, your iPhone's back, with its Phone Cooler Chroma. A product well-built but so ill-conceived on every level that it makes me mad just to know it exists. This is a solution in search of a problem; a product that is both expensive and useless. But don't worry, it also makes using your phone for anything at all a much worse experience, too!

Does your phone run hot?

If you've ever been using your iPhone and thought, Boy, it sure did get hot! then you might think a cooling device is the right answer. These days, phones mostly get hot when they charge rapidly, or sometimes during extended sessions playing high-end games. Simple games and everyday use really don't make your phone warm enough to want an external accessory to deal with it. Still, assuming you do want a thing to cool down your iPhone, this is not a good product.

Here's what the Razer Phone Cooler Chroma does: It attaches a massive puck-shaped cooler to the back of your iPhone via Magsafe, where it shines RGB lights and a small fan makes a ton of noise.

That's it. That's the product: A loud, bright, bulky, expensive, phone cooler. You might think that, since it attaches to the MagSafe magnets in your iPhone, it also acts as a wireless phone charger. It does not. 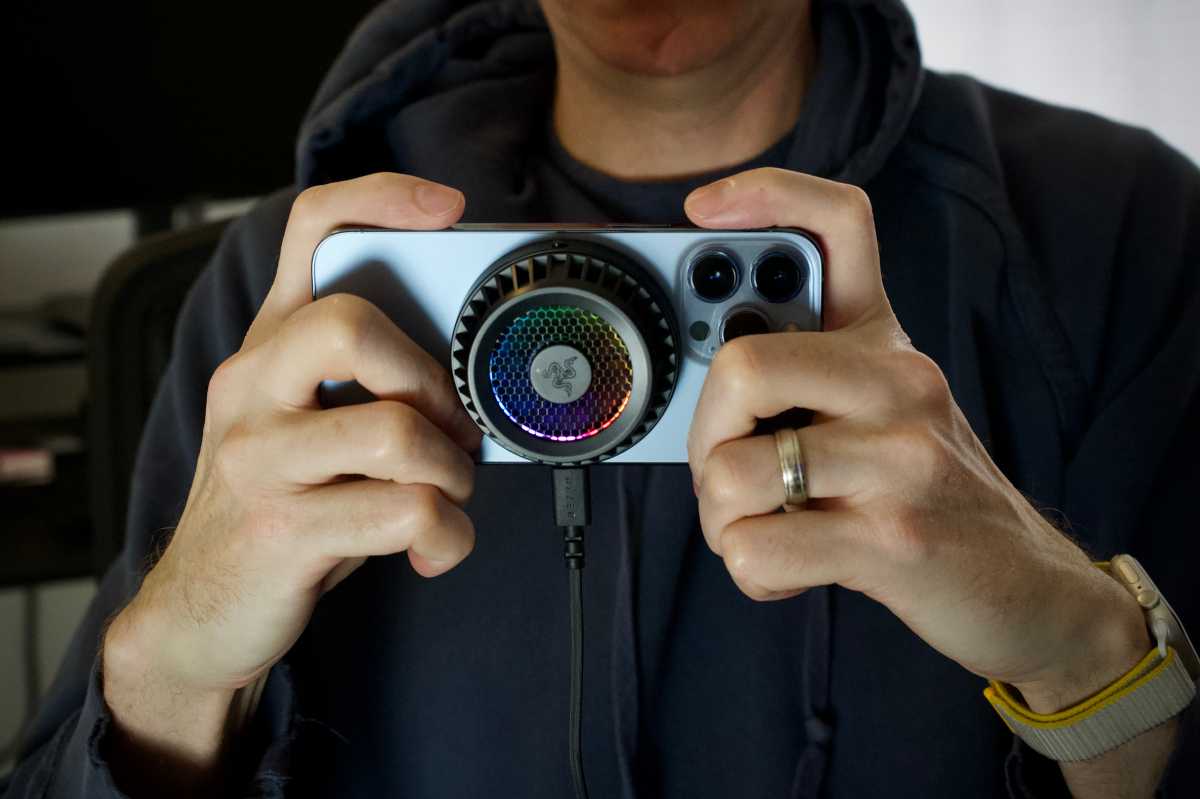 Playing games with this big thing attached to the back, and the cable hanging off it, is an absolute chore. Image: IDG

You also might think that it somehow runs off your phone's battery, or maybe has one of its own. It does not. You have to keep it plugged into a USB-C power cable, practically defeating the purpose of playing phone games. Razer includes a nice braided USB-A to USB-C power cable, but no power adaptor, so you'll have to supply your own.

The included cable is five feet long. You always play games on your phone within five feet of a power outlet, don't you? Oh and if you do want to charge your iPhone too, you'll have to plug in the Lightning port because this big ‘ol fan is on the back prevents wireless charging. So you'll have two cables running to it. Just what every gamer wants!

I won't fault Razer for stuffing twelve RGB LEDs into this obnoxiously large puck-shaped cooler. That's sort of Razer's whole thing, and a part of gamer culture these days. The phone app that controls the device's RGB lights and fan speed is simple and effective. 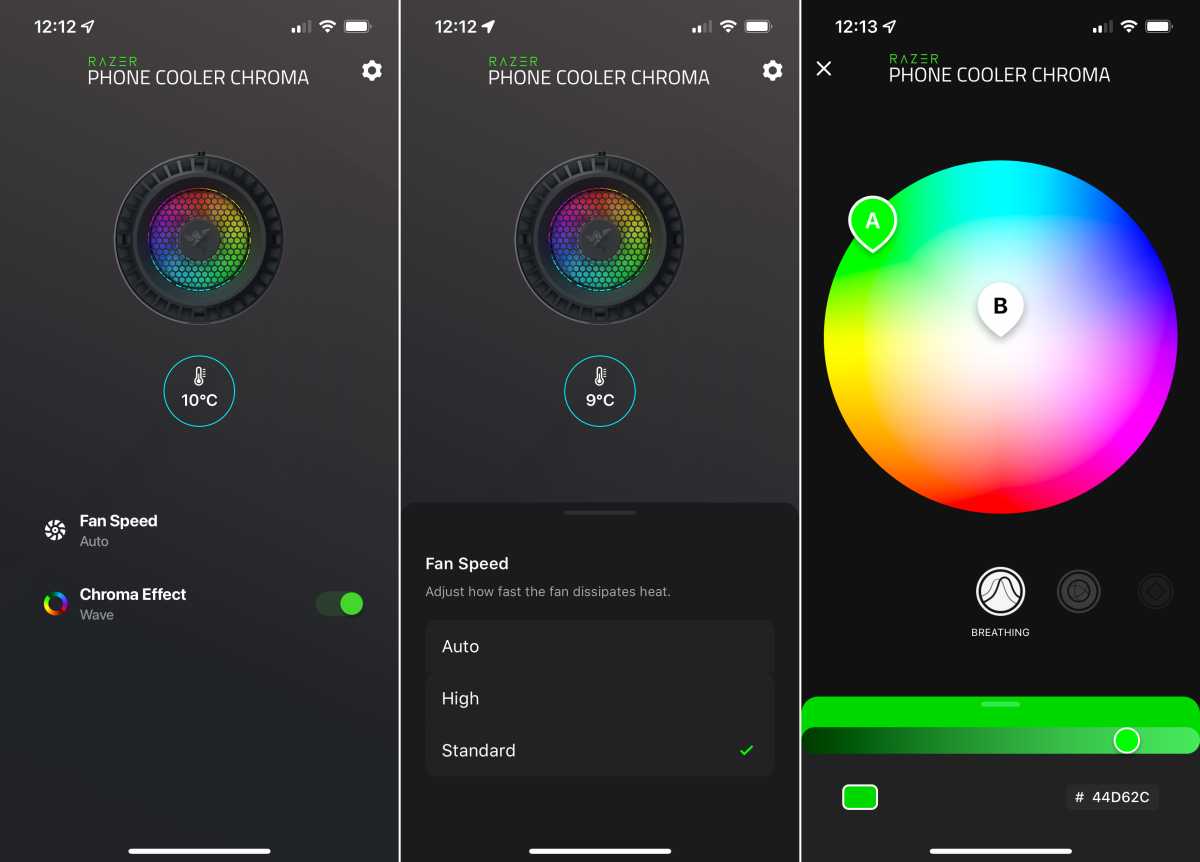 The app to control the fan and RGB lights is simple and effective. Image: IDG

But the fan is a disaster. The specs claim a quiet 30dB noise profile but that must be a sound measurement from 2 meters away or something because this thing is loud. The 7-blade fan is tiny and has three settings: Auto, High, and Standard. The quietest setting (Auto) produced a shockingly loud whirr, and the small fan size results in a rather high pitch.

The fan noise drops off with distance, and you wouldn't hear too much from across the room, but maybe someone should have informed Razer that phones are handheld devices.

Or at least, they usually are, when you don't have a giant hockey puck stuck to the back of it. The Phone Cooler Chroma is so bulky that it makes your iPhone physically difficult to grip.

Razer should be ashamed of itself

I have owned and used multiple Razer products over the years, and while I find the design language a little too edgy for its own sake for my personal taste, I've usually been impressed. Razer products generally work well, are built well, and do things customers really want. 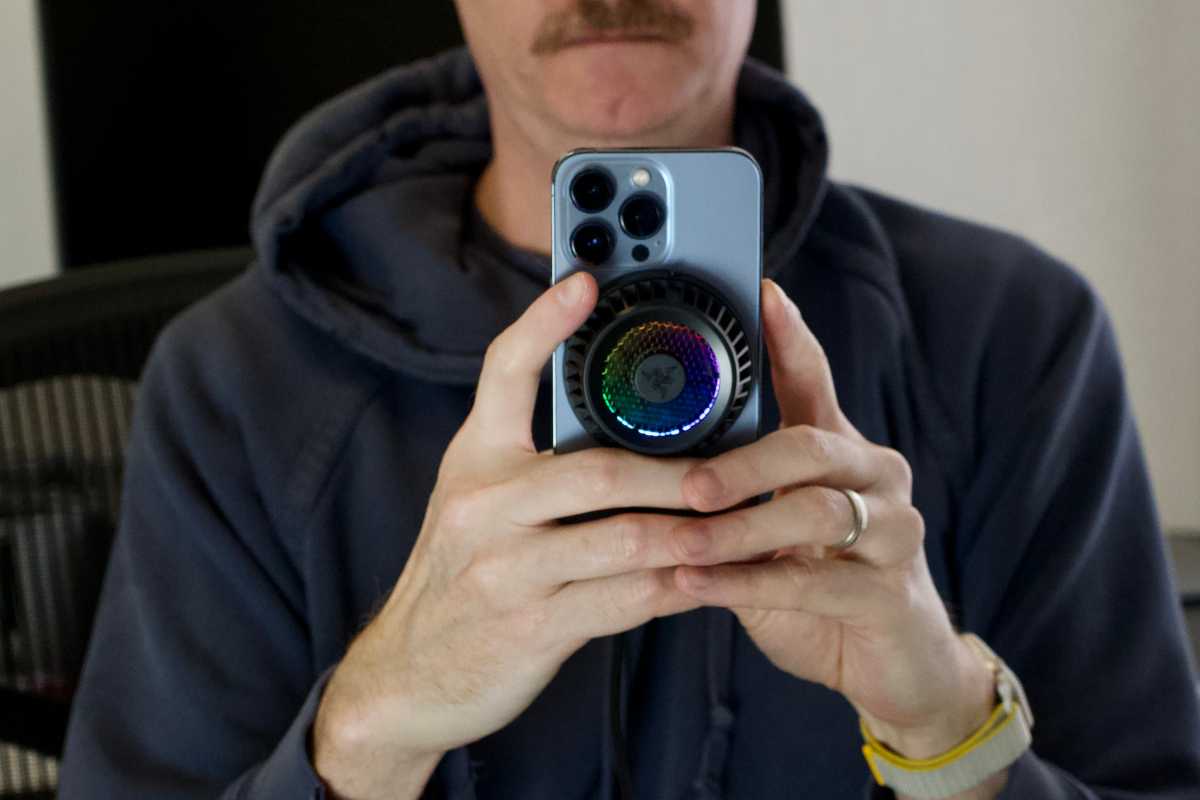 The huge fan gets in the way of your grip in any orientation. Image: IDG

Razer should be ashamed to have their brand associated with this shameless cash grab. It certainly does make your iPhone cool—cold, even!—though that doesn't seem to be a top-ten concern among mobile gamers. But everything else about it is a disaster.

Oh, and all this for only US$60. If my phone came with one of these attached, I'd pay US$60 to have someone remove it!

The Razer Phone Cooler Chroma does indeed cool your phone, but its plug requirement, bulk, noise, price, and confounding lack of phone charging capability make it a product where you're paying through the nose to making playing games (or doing anything else) on your iPhone worse. It's almost impressive, in a late-stage capitalism people will buy anything sort of way.