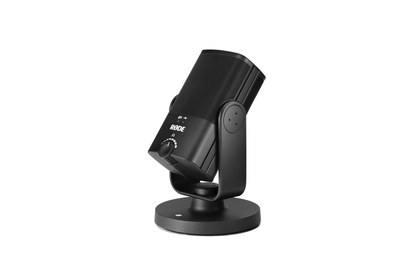 With gaming brands like Razer and HyperX expanding into the content creation hardware space, it was only a matter of time before more established audio brands like Rode pushed back.

The new Rode NT-USB Mini is very much that. Small but smart, it’s intended to steal the attention - and dollars - of aspiring streamers everywhere. Basically, if you want to do some studio-quality recording using your computer or tablet, Rode are pitching themselves as the easy-fix. After all, they’ve been doing this stuff for decades longer than the alternatives.

The Rode NT-USB Mini is an entry-level microphone that lives up to the legacy of the brand, even if it rarely surprises.

As far as the features go, the Rode NT-USB brings an impressive CV to bear. It’s got a directional cardioid pickup pattern optimised to reduce room sound, smooth frequency response, an in-built pop filter, an integrated 360-degree swing mount with a detachable magnet stand plus a studio-grade headphone amplifier.

Then, when it comes to design, the Rode NT-USB Mini keeps things simple to predictable but compelling effect. Where many of its competitors have opted to go big and evoke the aesthetics of bulky Hi-Fi hardware, the Rode NT-USB leans on the notion that less is more. Slim and rectangular in shape, the NT-USB Mini touts a matching set of LED lights that are used to convey and confirm its status. There’s also a solitary but approachable-looking dial perched on the chin of the microphone - which is used to adjust your gain as necessary.

Though hefty when handheld, there’s a sense of smart modernity to the look and feel of the NT-USB Mini that made it feel like a welcome addition to my crowded desktop. Better still, if you need to use it on the go, it’s extremely easy to just twist it off its magnetically-attached base and shove it in your bag.

Another thing I really like here is the fact that the microphone uses USB Type-C. Your mileage might vary but, for me, every extra bit of tech that uses this particular cable type means one less cable I need to worry about losing.

The plug-and-play appeal is strong here but if that's not what you're after, you might come away disappointed. As opposed to stuff Logitech's Blue Yeti X, the NT-USB Mini doesn't rely on any sort of proprietary software for advanced customisation or configuration. Unless you're running it through software that bridges that gap, what you see is what you get.

The only part of the baseline NT-USB Mini package I wasn’t thrilled with was how low to my desk the actual microphone sat. As opposed to something like the Razer Seiren or HyperX Quadcast, it often felt like I had to speak down towards the NT-USB Mini to get the best results. In that sense specifically, the aforementioned alternatives do have something of an edge on convenience.

Full disclosure, I’m not an audiophile or a full-time content creator. I’ve done a little streaming and podcasting here and there. However, I can’t necessarily vouch for the quality of this thing in the same way a phone like the Oppo Reno2 Z. Still, compared to my gaming headset mic, I found the audio quality significantly crisper and more warm in tone.

More than that though, the thing that stuck with me about the Rode NT-USB Mini was the sense of balance. For me, it made the idea of recording stuff on it feel like much less of an ask than it usually is.

Previously, Rode have had the pedigree for quality audio gear. Now, they've got a product that's affordable enough to plug that gap in your home or office-based content creation setup. Again, it’s not quite pro-grade - but if you’re expecting something that’s merely decent, you might be surprised.