The Rocket 4 falls well behind in synthetic benchmarks, but did very well in real world testing. It's a good cheaper option for your PC or PS5. 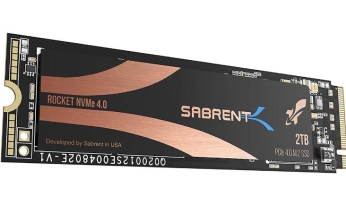 The Sabrent Rocket 4 is well behind the PCle 4 curve in benchmarks, but still delivers good real world performance. A cheap option for your PS5.

Sabrent's Rocket 4 was one of the first PCIe 4 SSDs out of the gate. It's not even close to newer PCIe 4 NVMe SSDs on sustained throughput benchmarks.

Don't let that fool you however. The Sabrent Rocket 4's real world performance is surprisingly good, even when compared to the top dogs. If you're looking for a cheaper PCIe 4 option, or an SSD that would pair nicely with your PlayStation 5, this might be a good choice.

We saw the 5GBps read performance Sabrent claimed, but we also experienced many significantly slower read runs over PCIe 4 (3.2GBps reading). Basically, with 10GB or less employed by our CrystalDiskMark or AS SSD testing software, we saw a hair over 5GBps. With the 32GB test that we normally run on CrystalDiskMark, we saw anywhere from 2.8GBps to 4.2GBps read performance.

This is likely a secondary caching issue (NAND as SLC) but it might also be the way the benchmark is set up. We included both the 8GB and 32GB tests below so you can see the issue. Note that the drives we compare it to are two of the three absolute fastest SSDs on the market (the other being Kingston's KC3000). 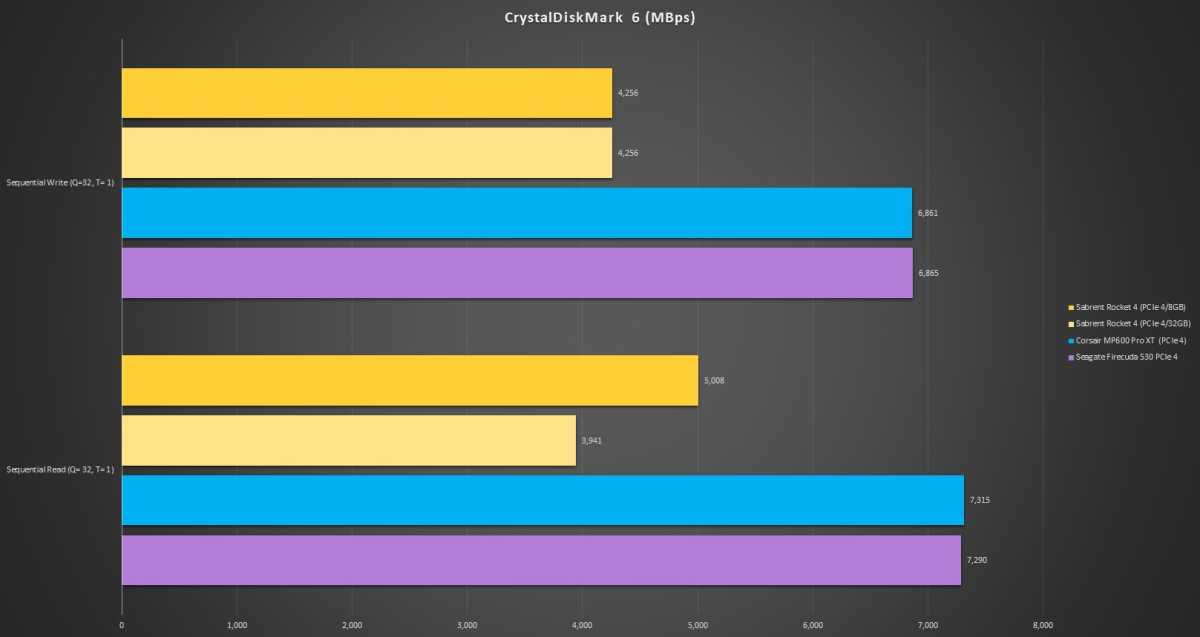 For some reason the Rocket 4 lost a bit of steam reading when we upped the CrystalDiskMark 6 data set from 8GB to 32GB. Normally, read performance doesn't vary at all. Longer bars are better.

After the benchmarks, the times in our 48GB real world transfers were a more than pleasant surprise. You might call them redemptive. This has a lot to do with the limits of operating systems. 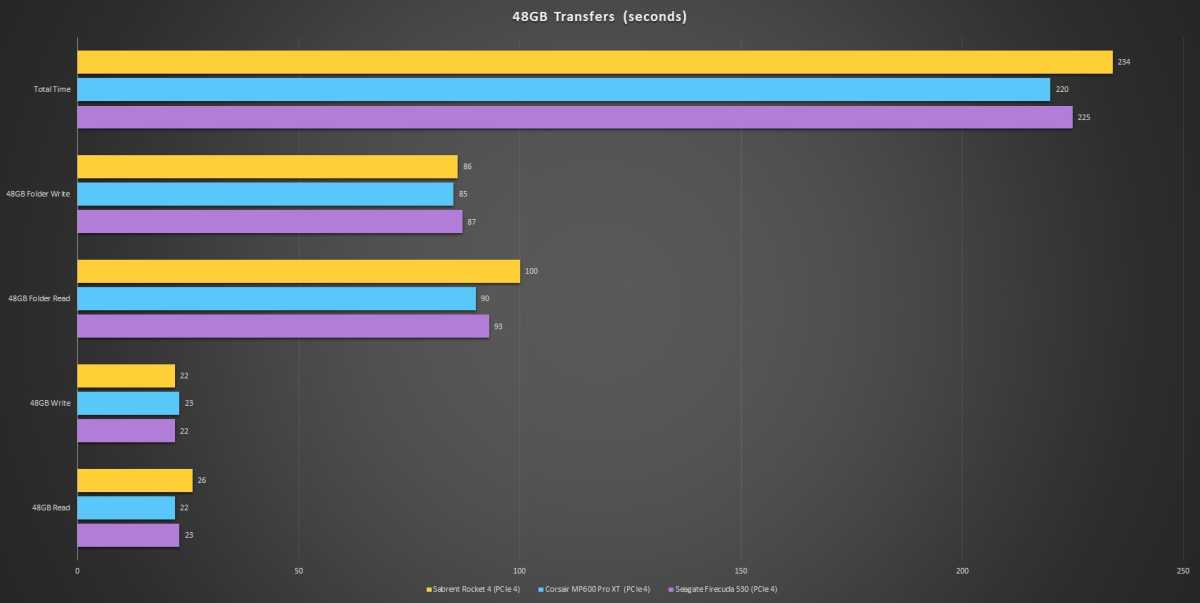 The Rocket 4 did quite well in our 48GB transfers, coming within shouting distance of two very fast competitors. Shorter bars are better.

Another pleasant surprise was the the Rocket 4's 450GB write time–the ninth fastest we've seen. This test reveals secondary cache issues, but the Rocket 4 was largely free of these.

Note that as the drive fills up, NAND for cache dries up and this type of test proceeds at the native speed of the NAND. 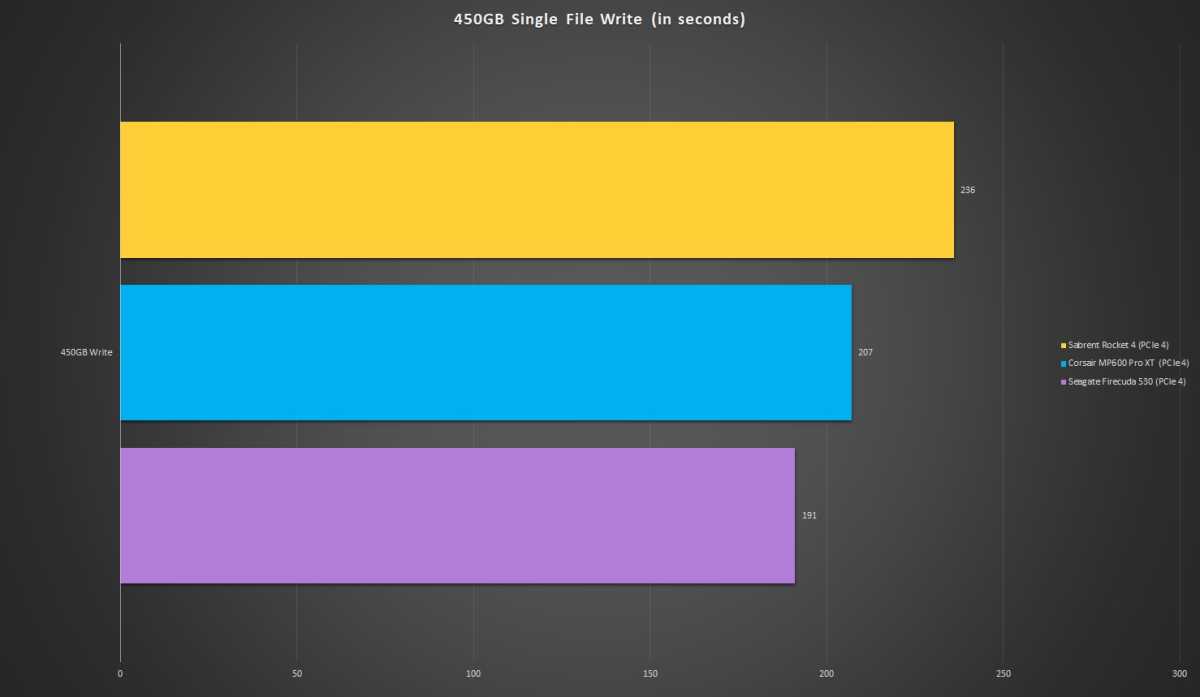 Though this looks less than impressive, the Rocket 4's time is actually the 9th fastest we've seen and continues the drives comeback in real world testing. Note that the Corsair and FireCuda 530 are both top three drives performance wise. Shorter bars are better.

There's no reason to spend this type of money if you're using PCIe 3. But just in case, the Rocket 4's performance was slightly above the PCIe 3 average.

The PCIe 4 testing was done on an MSI MEG X570 motherboard socketing an AMD Ryzen 7 3700X 8-core CPU, using the same Kingston DRAM, cards, and software. All testing is performed on an empty, or nearly empty drive that's TRIM'd after every set of tests. Performance will decrease as the drive fills up.

Note that some vendors have been swapping slower parts into their drive after reviews have posted. Sabrent states this will not be the case with the Rocket 4 or any of the company's drives. Still, our standard request is to please inform us if your drive's performance, given a similar hardware platform, varies significantly from what we saw.

A good drive with limits

The Rocket 4 didn't test well under our synthetic benchmarks in terms of sustained throughput, but it was quite agile in our real world tests and like all NVMe drives, has insanely low seek times. We trust the real world.

By all reports, the Sabrent Rocket 4 should do just fine as a cheaper option for you gaming/editing PC or your PlayStation 5. We'd recommend something faster such as the Corsair MP600 Pro XT or Kingston KC3000 for a PCIe 4 PC where pure, raw speed is the goal—but those drives cost much, much more.