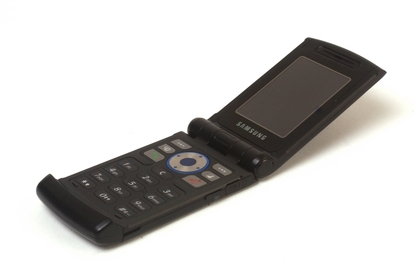 The razor thin Z510 is a fine entry into the 3G market and comes highly recommended. Although its poor camera and lack of memory expansion are hindrances, its design and user interface ensure it is still a hit.

Razor thin is the new fashion statement when it comes to mobile phones. Since the launch of Motorola's RAZR V3, we've seen an increase in this type of design and while Samsung's Z510 is similar, it has enough of its own characteristics to distinguish itself.

Aesthetically, the Z510 is quite striking for a 3G phone. Sporting a rotating camera and external display, the matt black finish combines well with its razor thin credentials. A dedicated camera button, external volume controls and three music buttons highlight the emphasis on multimedia functions. The Z510 slips easily into your pocket or bag, but being so thin a sacrifice had to be made and this was in sheer size; when flipped open, the Z510 is quite long and wide and is one of the larger handsets on the market. However, the Z510 feels extremely well built and our overall impression is one of a solid phone.

Display and Controls
Flipped open, the Z510 reveals a gorgeous 262K colour screen that occupies plenty of real estate. It's definitely one of the better displays available at the moment and complements the raft of multimedia functions the handset is capable of. Throughout testing the display was vivid and bright, but we felt it lacked the same characteristics in direct sunlight and its viewing angle is somewhat limited. It does attract unwanted fingerprints and smudges, but these faults are common in many handsets.

The external LCD displays colour wallpapers, reception indicator, battery life, time and date, and caller ID information. Like the internal display, the external screen is also a fingerprint magnet, but it is well positioned and is a fair size for this type of handset. The display also suffers the same problems as its internal brother; that is, a poor viewing angle and a weakness in sunlight.

One of the main issues with the RAZR V3 was the keypad; with illuminated backlight it may have looked good in the dark, but the design wasn't practical and the keys not raised enough. This made it difficult for typing long messages and put an unwanted strain on your fingertips. The Samsung Z510 keypad doesn't lack style, and although the Z510 keys are fairly flat, their gloss finish combined with excellent spacing between keys ensures the keypad is a hit. The keys could be raised a little, but we experienced no problems with messaging. Our only keypad complaint: the glossy surface on the keys does result in smudges and fingerprints.

The Z510 sports a 5-way navigational pad, two selection buttons, a Clear key, Answer and End call keys and dedicated buttons for video calling and application switching. We would have preferred less buttons, but they are well spaced out and aren't a hindrance in any way, so the end result is pleasing.

User Interface
Samsung has continued with the interface style seen on their D500, D600 and more recently, the D820. As you may already know, we are huge fans of this system as it is very easy to use and offers an animated, graphic intensive main menu. The Z510 is once again a standard 4 x 3 grid system, but an option in the settings menu allows you to change it to a flash based design. While the latter certainly brings out the best in the display, the grid system is more practical as you don't have to scroll through an entire list to access a single menu item. Selecting an item from the main menu item brings up a simple list format of options, all of which can be directly accessed using keypad shortcuts.

Imaging
The Z510 includes a rotating 1.3 megapixel camera and is used for both taking photographs and making video calls. The decision to run with a 1.3 megapixel lens is strange, especially when you consider the D600 utilised a 2 megapixel camera. In a newly released 3G handset this is definitely a let down. The camera can be rotated in a circular motion and is faced inwards for video calling and outwards for photos. Unfortunately images were fairly average; they look great displayed on the phone's screen, but when they are uploaded to your PC, the results are less than satisfactory. It's a shame, especially when you consider the multitude of multimedia features this handset possesses. The difference between a 1.3 and a 2 megapixel camera is most pronounced when images are taken in low light conditions - graininess is more prominent on the lower megapixel setting.

The camera has plenty of settings, including Mosaic and Multi Shot modes, Black and White, Sepia, Emboss, Aqua and Green effects, Frames, a Flash and a 5, 10 or 15 second Self-Timer. A dedicated camera button on the left side of the handset ensures it is easy to fire up and get snapping.

Other Features
The Z510 is packed with plenty of other features including MP3 playback capabilities, WAP 2.0, Voice recording functions, a Media Player, Java support and Bluetooth connectivity. Unfortunately the Media Player is hindered by two issues; a proprietary headphone jack and no expandable memory slot. The latter is a huge surprise and although the 138MB of internal memory is generous for a mobile phone, we were disappointed there was no memory slot.

There are also extensive PIM features including a Calendar, Calculator, World Clock, Currency Converter, Tasks and Memos. The Alarm function takes up a whole menu item on its own, with options for a Single, Daily and Wake Up alarms, all fully customisable. The Z510 provides support for SMS, MMS and email messaging and of course, T9 predictive text input is standard.

Battery Life
Samsung mobiles are well known for their below average battery life but with up to 200 hours of standby time and up to three and a half hours of talk time, we had no issues with Z510. We found that it needed a charge every three days or so, which is more than adequate considering the multimedia functions the handset provides.