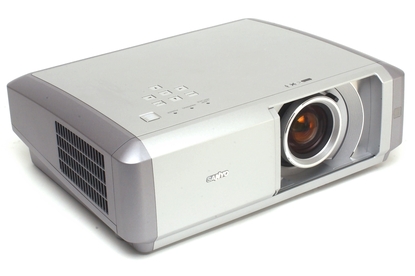 A good projector, but not quite as good as the Z3, and with a few minor annoyances.

The GoodGearGuide team has been eagerly anticipating getting our hands on the Sanyo PLV-Z4. We were fans of the Z3 and enjoyed the evolutionary leap it made from the early days of the Z2. However, the Z4, while reasonably good, isn't the outstanding performer we were hoping for and was no match for the Panasonic AE900, currently number one on our list of LCD projectors to drool over.

The Z4 has undergone some huge design changes. It has tossed aside its stylish visage in favour of a much boxier industrial design, reminiscent of many business projectors on the market. The front of the unit sports a large lens door which automatically slides open and closed when the projector is powered on and off. This feature was very impressive and added an air of sophistication to the unit. The left side of the Z4 has lens shift controls giving the user full control over the horizontal and vertical position of the image on the screen. Once the position is correctly adjusted, it can then be locked in place with another switch which disables the lens shift functions. This was an extremely useful and brilliantly implemented feature. The rear of the unit houses all the connections and the Z4 is far from short on those. It has a HDMI port and 15pin D-Sub, S-Video and RCA video inputs and two component video connections. There are no audio connections on the unit, but that is by no means a disadvantage. Most projectors with in-built audio offer appalling sound quality and most people buying a home theatre projector probably have a surround sound setup anyway.

As a whole, the image quality of the Z4 is quite good although we did find a few problems - some minor and others quite severe. Before our formal testing we ran the projector over a two week period in a home environment watching various DVDs and playing Xbox games. DVDs looked great with quite reasonable colour reproduction and brightness and video games worked quite well without much of the motion blurring usually seen on other projectors in the market. However, the Z4 seems to have an automatic dim feature which kicks in at odd and mostly inappropriate moments. The dimming seems to be attempting to compensate on-the-fly for image brightness but it seemed to do it in a very illogical manner. Rather than tone down whites in a bright image and brighten up darker elements, it seemed to do it in reverse, dimming when images became dark, making them harder to make out. It is also really noticeable when the whole picture gets darker in the middle of a scene then suddenly for no discernable reason becomes bright again a moment later. We searched for a way to turn this off but found no reference to it in the menu system. We attempted to compensate by choosing one of the pre-set image schemes but it made no difference.

The menu system on the Z4 is extremely simple to understand and quite powerful in its calibration options. It gives the user a series of pre-set image schemes such as vivid, natural, cinema and the like while also allowing calibration of brightness, contrast, colour temperature, individual colour channel tweaking and the like. Optimising the image to your home environment is very easy and possible for amateur projection enthusiasts and professionals alike.

We tested the HDMI and component connections using our Digital Video Essentials test DVD run on a Denon DVD player. While the HDMI connection looks slightly better than the component, the test results were consistent across both connections and as such we will discuss them here as one set of results.

We noticed some colour bleeding between certain colours in our colour block tests and SMPTE bat tests. In the block tests the defined edges of the green and purple blocks tended to bleed together forming a third colour, a mix of the two. This bleeding was also prevalent in the SMPTE pattern mixing yellow and red, purple and cyan and once again affecting green against purple. We also noticed a pulsating black square of pixels that would intermittently blink on and off within the purple blocks. We thought it may have been an aberration of that particular part of the screen or the signal from our source but found it happened in all instances of large amounts of purple even when playing the menu screens of our The Incredibles DVD via various source devices. This particular problem was specific to the component connection though as there was no incidents of it occurring via HDMI.

The black on white block tests were flawless and delivered rich blacks and bright whites which were soon thereafter dimmed by the projector. In grayscale the projector did well but we did notice a pink hue to the lighter gray registers.

We connected to the projector via D-sub to our test laptop and ran Display Mate Video Edition at 1280x1024 resolution to mixed results. The geometry and distortion tests were fine with no noticeable pixel draw inaccuracies in simple line geometry. However, in our Sharpness and Pixel Tracking tests, we noticed the projector has serious problems drawing complex geometries. We used a test pattern designed to test moire distortion which consisted of hundreds of vertical lines and tested the performance in all the primary and secondary colours, one at a time. The results were disastrous. In every colour the projector produced serious distortion of the lines, often dissecting them at three separate points and mis-aligning them to the right. The overall effect looked like serious banding in the shape of the famous Atari logo. This extended to all other tests where fine detail was required from the Z4.

The Z4 is not a bad projector by any means but it is not as good as its immediate predecessor or many of its competitors. It sits squarely mid-range. For the average user, it is ideal as it is simple to use and set up, but the dimming issue will annoy people especially those that are purists when watching their favourite movies. We were also happy that the exhaust didn't seem to give off as much heat as other projectors that we have tested and the power down cycle wasn't as long either. The cost is a little high for the quality of this projector but with street prices being how they are, you will more than likely be able to find it available for much less.