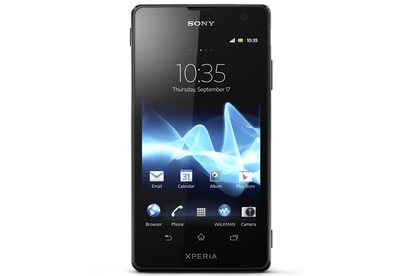 The Sony Xperia TX has an excellent display, some nice UI features and a distinctive arc-style design. However, it offers little that we haven't already seen on rival devices, making it a good smartphone that lacks any real wow factor. Given this is supposed to be James Bond's smartphone, it also feels a little cheap.

Sony is using its link with the latest James Bond flick to push its newest flagship Android phone, the Xperia TX. The "official smartphone of the James Bond movie Skyfall", the Sony Xperia TX has an excellent display, a good UI overlay and a distinctive arc-style design. However, it offers little that we haven't already seen on rival devices, making it a good smartphone that lacks any real wow factor.

Sony and Sony Ericsson before it has had limited success in the Android market, but the company certainly knows how to design a smartphone. The Xperia TX features Sony's almost iconic arc-style design, also seen on the previous Sony Xperia S. The design is simple yet elegant and features a flat front with a curved back in an arc-like shape. This unique shape immediately sets the Xperia TX apart from rival models and also makes the phone comfortable and easy to hold. The shape fits nicely in your hands and especially lends itself to one-handed use, though it annoyingly rocks from side to side when placed on a flat surface like a desk or table.

Weighing 127g and measuring 8.6mm thick at its thickest point, the Sony Xperia TX compares relatively favourably against the competition when it comes to dimensions. The top, bottom, back and sides of the Xperia TX feature a matte-style plastic finish that is very kind to fingerprints, though the same can't be said about the front of the handset which quickly becomes a glossy fingerprint magnet. The slightly raised, glossy edges surrounding the front are a nice touch and we also like the chrome strip that runs along the edges.

Oddly, Sony has positioned the small power key on the left side of the Xperia TX, towards the top. This layout significantly favours left-handed users over right handed ones. The only other buttons on the handset are a volume rocker and a dedicated camera key, both on the right side. We found the volume rocker a little too small, making it easy to accidentally press the wrong key, while the camera button is positioned a little too close to the bottom of the phone. The standard micro-USB port is positioned on the right side, which doesn't play nicely with in-car cradles (now a legal requirement in New South Wales).

Further, while we like its weight and ergonomics, the Xperia TX's plastic design doesn't feel as premium as we'd expect it to, especially given this is supposed to be James Bond's weapon of choice. It's a nice design but not one we could see any 00 agent using on a daily basis.

Perhaps the best feature of the Sony Xperia TX is its 4.6in display, which has a 720p resolution of 1280x720. It's bright, clear and displays very sharp text with no visible aberrations. It also has excellent sunlight legibility outdoors. We found it brighter than a Google Nexus 4 when compared side-by-side. The colours on the Xperia TX also appear more vibrant than its LG counterpart, though sometimes at the expense of oversaturation. The Xperia TX can't display the same deep blacks as the Nexus 4, though.

The 4.6in screen is shorter in width than the likes of the Nexus 4 and the Samsung Galaxy S III and this makes Xperia TX easier to hold and use single-handedly. We also like Sony's abolishment of physical shortcut keys. Instead, the Xperia TX uses on-screen back, home and multitasking buttons just like Google's stock Android user interface. These keys are responsive and change orientation when the phone is rotated into landscape mode.

The Sony Xperia TX initially comes with Google's 4.0 'Ice Cream Sandwich' version of Android, though Sony has promised an upgrade to the latest 'Jelly Bean' version in early 2013. The company has a very questionable track record when it comes to Android updates, so we can only hope it delivers on its promise as soon as possible.

The lack of the latest version of Android isn't a huge downside as the Xperia TX provides a pleasing user experience. It has five home screens for live widgets (though these annoyingly can't be removed or more added), a main menu that can quickly arrange apps in various orders, including most used and recently installed, and a lockscreen where new messages and missed calls can be opened directly by swiping them. The look and feel hasn't changed too much from Sony's previous Android phones, but the UI is relatively smooth and fast. We didn't experience any notable lag or slowdown during basic tasks.

The Xperia TX has a few new UI features. We like the toggles in the notifications window which allow you to activate sound profiles, Bluetooth, Wi-Fi and mobile data, though we'd have appreciated the ability to edit these. The "small apps" feature is also notable, allowing you to open basic pop-up apps like a calculator, timer, post-it notes and a voice recorder. These apps can sit on top of other apps allowing you to, for example, browse the Web or type a message with the calculator sitting on screen. Third-party developers can create further small apps, but at the time of review there was only two available in the Google Play Store.

We've been critical of Sony preloading its phones with bloatware, but the Xperia TX comes with a few apps we appreciate. The Walkman music player has a number of sound enhancement settings along with an attractive and clean interface. The new gallery app (called album) can sort image and video files by date or geotagged coordinates on a map and ties into the look and feel of Sony's UI overlay. We also like the Smart Connect app, which allows you to set rules when accessories are connected or at preselected times. As an example, you can set the phone to launch the Walkman app and immediately begin playing a certain music track whenever you connect your headphones. Other pre-loaded apps such as PlayNow, Timescape and Sony Select are simply a waste of space but they can easily uninstalled or disabled from the app menu in settings if you wish.

One thing we wish Sony didn't change was the on-screen keyboard.

One thing we wish Sony didn't change was the on-screen keyboard. It's functional and also has handy, Swype like functionality that allows you to draw over letters in a single motion to type words. However, it's word prediction isn't as accurate as Google's stock ICS keyboard and there's no option to switch to that keyboard. The spacebar also becomes too small when you switch on "extra" comma and full stop keys, which are a must.

Most our our indoor test shots suffered from excessive image noise.

The Sony Xperia TX comes with a 13-megapixel camera with single-LED flash and there's also a 1.3-megapixel front-facing camera for video calls. The rear camera takes decent quality images with notable detail levels and reasonable colour reproduction, but it works far better in outdoor lighting than indoors. Most our our indoor test shots suffered from excessive image noise and often appeared dull and dark. The Xperia TX's camera also records full HD 1080p video, though it is hard to keep a steady hand in order to avoid unstable recording.

One notable camera feature is the camera app itself, which is fast and functional. It takes little over a second to open the app from the lock screen (by pressing and holding the physical camera button) and the app itself has plenty of settings to tinker with including smile detection and a panorama mode. The camera key also works well and allows you to focus your shots with a steady hand. We did notice, however, that when you switch the camera to the maximum 13-megapixels (it's set to 10 by default) it takes almost a second longer to open from the lock screen.

The Sony Xperia TX isn't a 4G smartphone so it only works on Australian 3G networks. With most rival models now supporting 4G connectivity as a standard feature, this is a disappointing omission.

The Sony Xperia TX has a 1750mAh battery which does seem a little low for a device with a 4.6in display. We found battery life a little below average and struggled to push the phone through a full day of use. If you're a less frequent user you may be able to get closer to a full day of use, but the Xperia TX isn't going to win any awards for power consumption. The battery is removable and replaceable though, so users worried about power can easily purchase a second battery.

The Sony Xperia TX sells through Vodafone in Australia.