A flagship smartphone in a comfortable 4.3-inch body 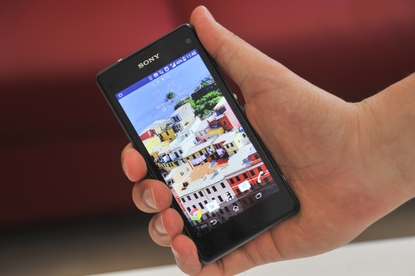 Sony has achieved something special with the Xperia Z1 Compact. The company has created an excellent phone — first. Then its added wonderful features to it, like the high resolution camera, exquisite display and its I’m-not-scared-of-water attitude. By no means is it disadvantaged by its smaller size; this simply makes it more enjoyable to use every day.

The Xperia Z1 was hailed as “the best of Sony in a smartphone”. Now the best of Sony is available in a smaller body and for a lot less with the new Z1 Compact. All of the features that make Sony flagships special are here, but with a little something extra.

Picture the Z1, albeit smaller, and you’ll have an accurate idea of what the Z1 Compact looks like. The minimalist styling of the front and back is crudely undermined by a cluster of ports on its right side. The tacky flaps covering them gives the impression the Z1 Compact's design was dictated by function and not beauty. The result is a smartphone that looks good, but by no means is it a show stopper.

This smartphone is all things

On its right is a micro-USB port, a micro-SD card slot, charging contacts and a micro-SIM slot. The left is a little less cluttered with its bespoke power button, volume rocker and shutter key.

Rival companies will have you believe the Z1 Compact’s 1cm thickness is an outrage. “It’s thicker than the 8mm Samsung Galaxy or LG G Pro 2”, they’ll say. In reality, Sony has found a sweet spot between screen size and comfort, and best of all the Z1 Compact doesn’t have to compromise on features in order to do so. This smartphone is all things.

What’s in a Compact?

A couple of points distinguish the Xperia Z1 Compact from its larger Z1 sibling, but the main distinctions concern the screen size and battery.

Whereas the original Z1 has a 5in, Full HD screen, the Compact variant settles for a 4.3in, 720x1280 resolution screen. The difference in experience is negligible as the Compact still benefits from a very healthy 342 pixel-per-inch density. Better yet, the smaller screen ensures the Z1 Compact consumes less power than larger ‘phablet’ alternatives.

Sony can afford to equip the more economical Z1 Compact with a smaller battery. It comes with an in-built 2300 milliamp-hour battery, which averaged a day of use under our heavy testing. This involved phone calls, messaging, social networking, web browsing (over Wi-Fi and 4G), constant music playback, some YouTubing and a non-stop Bluetooth connection to a Jawbone device we’re currently testing.

Sony smartphones feature technologies that don’t quite translate well on spec sheets. The company will often tout ‘Triluminous’ displays and ‘Exmor RS for mobile’ imaging technologies, but how do you measure the material value of this jargon?

This is what you need to know: Sony makes great televisions, cameras and gaming consoles, and the Xperia Z1 Compact incorporates mobile versions of these technologies. The word we would use to measure the difference these technologies make is “substantial”.

Rivals with the same specs are outperformed by the Z1 Compact. For example, photos taken of Sydney harbour captured subtle tonal variations in the evening twilight, and the screen displayed the scattered colours, busy atmosphere and flashes of light truthfully. We can’t measure how it does this better, but it does have something to do with the technologies the Z1 Compact has inherited from Sony’s other divisions.

A great deal of the Z1 Compact’s appeal stems from its comprehensive software. Sony’s custom software has reached a point of refinement where there are no tell-tale signs that they don’t actually make Android. Most of the customisations the company does make aren’t superfluous; most of them add real value.

Things we love include the customisable settings in the notification pane; the way the smartphone resumes music playback when we plug in headphones; how it manages to combine the stock Android task manager with its own widgets and still make it look like the two separate elements belong.

Sony’s theme isn’t perfect, but it complements the design of stock Android better than any other rendition we have seen yet.

Making powerful hardware available in a smaller form-factors is fraught with challenges. Shrinking components is more expensive and making sure the smartphone operates without overheating is even harder. And to top it off, for the Compact to be a faithful Xperia Z device, it would have to do all this and be waterproof.

It is harder to make a powerful smartphone small

The reality is it is harder to make a powerful smartphone small, and the fact that the Z1 Compact overcomes these obstacles makes it even more special.

Powering the smartphone is the same components found in the larger Z1; there’s a 2.2GHz quad-core CPU, 2GB of RAM, 16GB of internal storage and the option of expandable microSD storage. Up until now, it hasn’t been possible to find this kind of hardware in an Android smartphone the size of Sony's Xperia Z1 Compact.

Imaging is a real strong point for the Z1 Compact as it comes equipped with 20.7MP rear camera. There’s a transparency to the way it captures colours — what you see in real life is what’s displayed on the screen — and environments with complex lighting are handled with ease.

Most smartphone cameras struggle with high contrast situations, which are often found when there is a strong backlight. We went walk-about with the Xperia Z1 Compact and found it handles these situations better than most rival smartphones. Some detail in shadowing is lost, but overall, photos look great.

There’s even the luxury of blowing photos right up at native 20.7MP resolution when the lighting is ideal. The photo below has barely any noise, even when you look closely at the fully blown inset.

The Z1 Compact features plenty of shooting modes, but one in particular livened the office. An augmented reality mode generates animations of dinosaurs, fish, dwarves and other cool game-like animations. The camera takes a moment to focus, and then an animated overlay interacts with whatever is being framed. Sure, it is a superficial and silly feature, but it is one that can be enjoyed by children and adults alike.

One of the best phone cameras we’ve seen

Videos are recorded with the same diligence in Full HD (1080p) resolution. The camera continually focuses to ensure moving items are captured clearly, and it performs well in a wide range of lighting conditions.

The secondary front facing camera captures 2MP photos, and it too records video in Full HD resolution. A strong front-facing camera comes in handy for selfies and when holding videocalls over applications.

The Z1 Compact isn’t a smartphone that shies away from the elements. The smartphone has IP55 and IP58 certification, and that makes it waterproof and resistant to dust.

Jump in freshwater and the Z1 Compact can take pressure for thirty minutes at depths of 150 centimetres. A physical shutter key allows you to snap photos and record videos under water. When you’re done, simply wipe the smartphone dry and carry on with your day.

Admittedly we didn’t have the chance to go swimming with the Z1 Compact, but randomly dunking it in water made for a hilarious party trick. Each time we whisked it out, the Z1 Compact worked without faltering.

Sony has achieved something special with the Xperia Z1 Compact. The company has created an excellent phone — first. Then they’ve added wonderful features to it, like the high resolution camera, exquisite display and its I’m-not-scared-of-water attitude. By no means is it disadvantaged by its smaller size; this simply makes it more enjoyable to use every day.

The greatest compliment we can give the Sony Xperia Z1 Compact is this: if we were spending our own money, buying a Z1 Compact would be money well spent.