A rugged mobile phone designed to take a beating 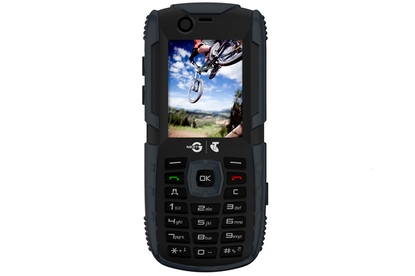 It may not be the most pleasing mobile phone to look at, b ut Telstra's Tough T90 does what it's designed to do – provide a solution to those who require a phone that can take some punishment. It's a little expensive, though.

Targeted at tradespeople or those with an active lifestyle, Telstra's Tough T90 mobile phone is designed to take a beating. Water- and dust-proof, and drop tested for shock resistance, the Tough T90 includes a number of handy features.

Like most ruggedised phones, the Telstra Tough T90's style won't appeal to those looking to make a splash in the fashion stakes. Manufactured by ZTE, it's like tradespeople: effective but certainly not pretty (no offence to tradies intended). The black and dark blue plastic casing is rock solid and capable of resisting some very harsh punishment. The screw on the bottom of the pack cover seals tightly when closed and can be twisted open using a coin. We even managed to play a round of soccer using the phone as the ball on a carpeted area and it survived virtually unscathed. (This isn't recommended everyday use of the phone.)

The Tough T90 includes a basic five-way navigational pad, two selection keys, answer and end call keys and dedicated calling list and clear keys. The keypad is large and each button is well separated. Aside from a rather loud clicking sound when a key is pressed, the buttons provide good tactility and there is an option in the phone's menu to activate audible key tones. We think the keys are a little small to be pressed with gloves, which is a situation that many tradespeople are likely to find themselves in.

The Telstra Tough T90 has an IP54 rating for dust and water resistance, though it's designed to withstand being splashed with water, not taken for a swim at the beach. We held it under a running tap for a few seconds and it worked without any issues.

Surprisingly, the Telstra Tough T90 mobile phone comes equipped with a reasonable display. It's bright, clear and crisp and is easy to see in direct sunlight, though it does reflect a little too much indoor lighting. It’s a little small for watching video content, but it does an adequate job when paired with Telstra's content and services, including Mobile Foxtel. That being said, watching videos or movies isn’t a key aspect of a ruggedised phone.

The Telstra Tough T90's user interface is straightforward and relatively zippy. Unlike many previous ZTE manufactured handsets there is no keystroke lag when scrolling through lists or typing messages. The simple grid main menu and list format submenus are easy to use.

The Tough T90's features won't wow, but there is a basic 2-megapixel camera, a music player and FM radio, Bluetooth and a voice recorder. A built-in GPS receiver is also present, though there is no preinstalled GPS application. A microSD card is located underneath the rear battery cover, but there is no 3.5mm headphone jack and the included headphones aren’t ideal for music as they lack bass and clarity. The Tough T90 works on Telstra's Next G network and is capable of speeds of up to 3.6 megabits per second.

The Telstra Tough T90 is BlueTick rated, meaning it has been recommended by the telco for use in rural and regional areas of Australia. Telstra also plans to release a dedicated car kit for the Tough T90, and this will utilise the direct connect RF port on the rear of the phone.