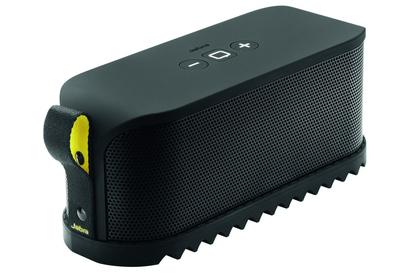 Portable Bluetooth speakers are a great idea for those who love to take their music with them on their travels. One of the best we've come across is the Jabra Solemate, a shock, dust, sweat and splash resistant device that has a quirky design.

The Solemate, as its name suggests, has been designed to look like the sole of a shoe. The bottom has a textured, rubber sole that immediately sets it apart from competing devices. The sole actually serves a purpose, too. When placed on a flat surface it prevents the speaker from slipping or sliding around.

The Jabra Solemate is shock, dust, sweat and splash resistant. The company says the Solemate's size and weight is comparable to a 500ml bottle of water and that's about spot on.

The Jabra Solemate allows up to eight Bluetooth devices to be connected to it including smartphones, tablets and Bluetooth equipped portable music players. It also features a standard 3.5mm audio cable connection for non Bluetooth devices, neatly stored in the bottom when its not being used.

Sound quality is reasonably impressive considering the size of the unit. The Solemate produces enough sound to fill a medium sized room with no problems, but raising the volume to near maximum level results in a tinny and distorted sound. Bass response is impressive.

Connecting the Solemate is an easy process, aided by audible voice alerts like "Solemate is connected". A voice button on top of the device also reads out battery alerts. Once an initial connection is made, the speaker will automatically connect to your device when it is turned on.

Jabra says the Solemate's internal battery will last for up to eight hours of continuous music playback before needing to be recharged.

A nice touch is the specially designed, durable sound bag that's included with the Solemate. It protects the speaker from the elements but its design allows the sound to get through.

The Jabra Solemate is sold through selected retailers in Australia for $199.