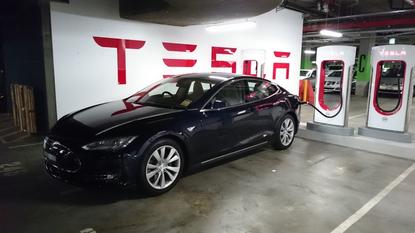 A Tesla Model S 85 charging at The Star casino, Sydney.

Dreams of driving a Model S from Brisbane to Melbourne are a little closer to becoming a reality with the latest developments made to Tesla’s Supercharger network.

The opening of a Supercharger station in Gudagai, a small town in New South Wales, has made it possible to drive a Model S from Sydney, through Canberra and to Melbourne, free from the costly burden of petrol.

It is part of a larger plan to have a network of charging infrastructure along the east coast of Australia. The Supercharger network was announced in 2014 and is expected to be completed in 2016.

The Gundagai Supercharger station is located on the Hume Highway alongside multiple eateries and can accommodate up to six Teslas at a time.

Up to 270km of charge can be replenished within 30 minutes, while customers eat, use the amenities and take a rest from the long drive.

The occasion was marked with a ribbon cutting ceremony and ‘supercharger rally’, where owners of a Tesla vehicle travelled in both directions from Melbourne and Sydney to Gundagai.