Setapp bundles over 200 Mac apps for a flat price that adds up to a bargain for many users. With the Mac, there are several ways to get software. There's the Mac App Store, or you can also get apps directly from developers through the internet, or you can get software through a third party. Then you can buy licenses with a relatively high upfront, one-time-only fee, or you can subscribe and pay a lower fee on a regular basis.

The Setapp subscription bundle seems to offer the best of all worlds for app users and software developers alike. The collection of over 200 Mac apps provides unlimited, ad-free access to a subscriber for as long as they're paying the relatively modest recurring fee. The real question with Setapp is whether the included apps that you choose to use total more than the $9.99-per-month ($107.88-per-year) subscription price. You should also factor in the utility of having so many apps at your fingertips while never having to manage or pay for upgrades with an active Setapp subscription. 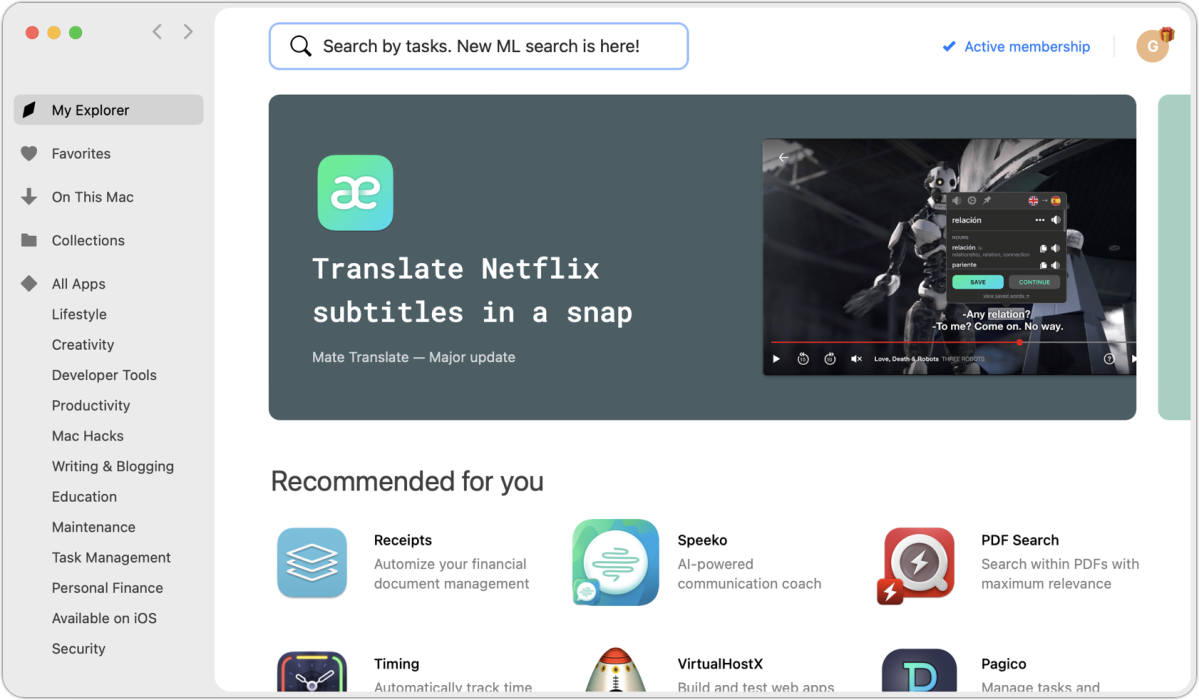 Setapp provides access to over 200 macOS apps through a simple search-and-browse interface.

What you get with a Setapp subscription

It wasn't clear at Setapp's launch in early 2017 whether developers would want to bundle software they could sell for more on their own and whether users would adopt the system. While the company doesn't disclose subscribers or financials, it continues to grow the numbers of apps in its collection, and fewer than 30 apps have dropped out. Setapp seems to have proven its viability.

Setapp includes a broad variety of apps. While I've never heard of a good portion, others are old standards, and many are highly recommended workhorses. Some apps, notably BusyCal and BusyContacts, nearly cover the subscription cost. Those two Busy Apps software packages are $49.99 each when purchased separately or $79.98 in a bundle. (Busy Apps includes 18 months of updates and perpetual use of a given version in its standalone licenses.) Setapp is a division of software firm MacPaw, and all MacPaw apps are also included, like CleanMyMac X, the Unarchiver, and Wallpaper Wizard.

You can subscribe to Setapp and proceed to install and use all of those macOS apps above and every one of the 200-odd others without paying an extra cent above the subscription price. This includes Bartender (menu-bar organization), Default Folder (improved file dialog management), Luminar (AI-powered photo editing), Hype (animated web content creator), Disk Drill (data recovery), NetSpotand WiFi Explorer (wireless network planning, deployment, and monitoring), and MarsEdit (blog-post writing software that works with most blog platforms). Many Setapp programs have received high marks in Macworld reviews or were recommended in articles like those linked in this paragraph.

Setapp comes in app form, naturally, with an interface that lets you search for apps, find suggested collections—such as for productivity or browser security—and install them with a click. Once installed, apps work just as they would if purchased directly from a developer. The Setapp app bumps you to its website for account management. 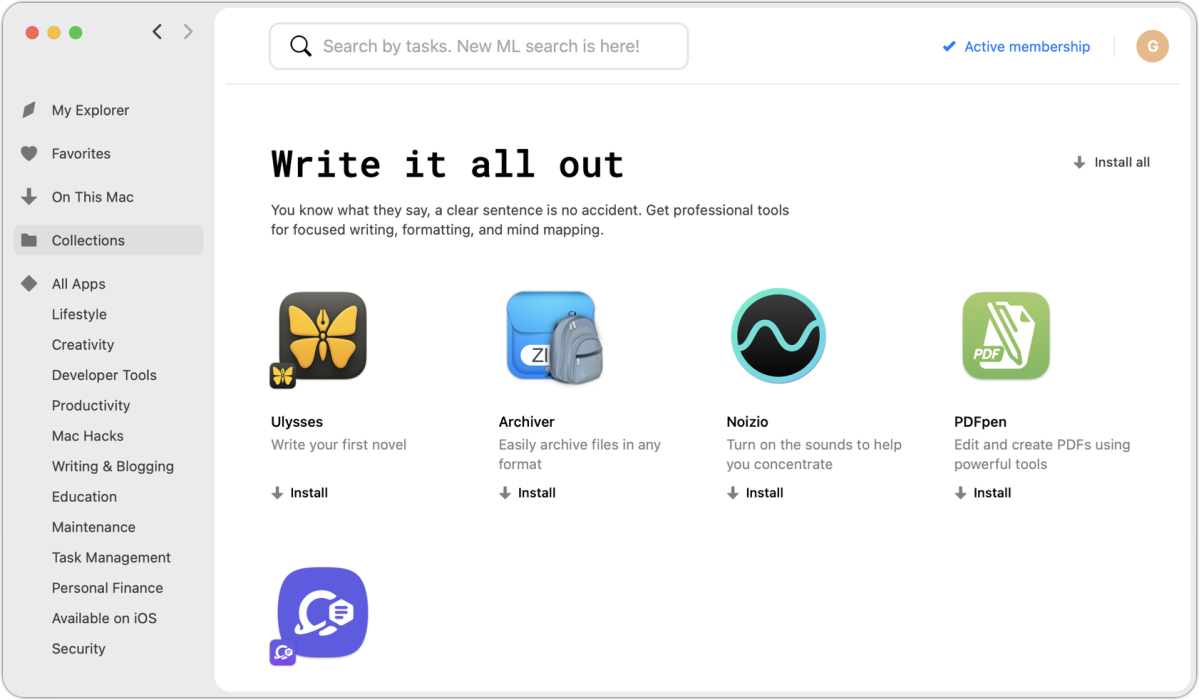 Collections in Setapp group together a set of apps that could provide a workflow for tasks or categories, allowing you to install them all at once with a click.

What it's worth to you

You can figure out if Setapp is a good choice for you by creating a quick spreadsheet. What apps do you already use? What apps have you considered purchasing? What updates haven't you purchased due to cost? And what gaps in your software needs do you have?

Search and browse the list of apps in Setapp's catalog and take a quick moment to visit the developers' websites to estimate the purchase cost, annual price, or update price for each. If you exceed $100 to $120 a year, you probably have your answer.

Because you can pay monthly or annually for just as long as you want, you can exit their approach without paying a penalty. Apps you installed via Setapp stop working after your subscription expires, and you may need to reinstall apps you already owned licenses to.

What of developers that decide to remove apps—would you be left high and dry? Credit Setapp for having a support document that provides two pieces of insight. First, installed apps remain working indefinitely, even when the app is no longer available to new users. You won't get updates, and you can't install on a new computer, but you will be able to keep using it as you have. Second, Setapp lists all the apps that were part of Setapp and are no longer. That's excellent transparency.

Though it has a simple all-you-can-install model, Setapp offers a few plans based on devices you want to use with a subscription, which I list by the company's name for each tier: 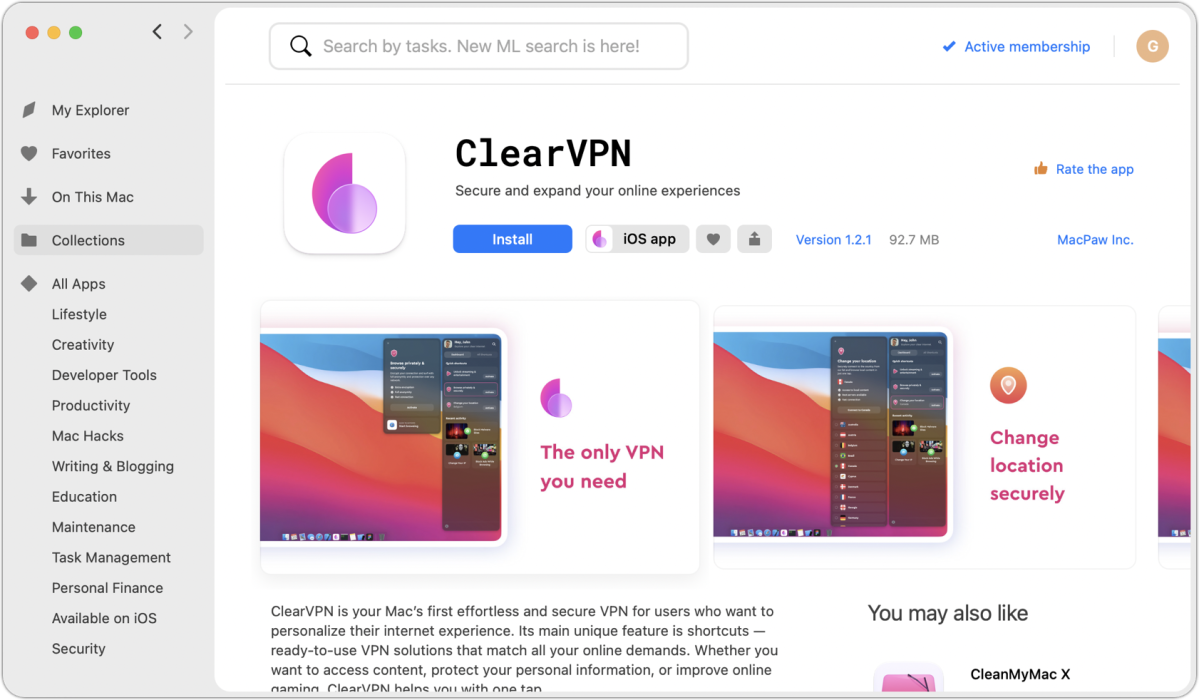 Installing apps requires just a click, after which the app remains available for as long as your subscription is active—even if the app's developer later decides to remove it from the Setapp subscription.

A middle course for users and developers

Setapp was launched in 2017 within the pincers of pricing tumult and purchaser discomfort rampant at the time. Developers could once price apps for consumers in the tens of dollars and for professional users in the hundreds—even thousands. That led to an annual dash to push out major updates to reap upgrade revenue, often producing buggy software with dubious improvements that took months to fix or even a full additional release.

A number of factors constrain what developers can charge, particularly for productivity and utility software. It's in that framework that Setapp has found an interesting path. You should enjoy the diverse array of software available. If you routinely use a lot of different software, you will likely find the roughly $10 per month cost neither offensively high or oppressively budget-busting. It might even offer significant savings.

While users don't need to care about developers' bottom lines per se, most of us want our favorite and most useful software to persist—and not accumulate 50 different yearly subscriptions. Setapp's middle path provides recurring revenue to developers and offers a consistent price and far less hassle to its subscribers.

It's hard to find win-win solutions in commercial situations, but Setapp appears to have done so. For many users, Setapp is a bargain that also helps ensure continued development for apps we rely on.