With the tagline Peek Performance, Apple's first event of 2022 contained a surprisingly robust array of new stuff. The third-generation iPhone SE was expected, but we also were introduced to an all new desktop Mac that has a new M1 Ultra processor and the Mac Studio display which has a camera, speakers, and USB ports.

Here's a brief list of everything Apple announced at its spring event, with highlights of each announcement and links to our more in-depth coverage.

Apple began the event by highlighting the critical success it has had with Apple TV+, particularly its original acclaimed movies CODA and The Tragedy of MacBeth. Then it previewed some new films such as Spirited and Lucky. We maintain a list of all the upcoming shows, series, and movies on Apple TV+.

But the big announcement was a new Friday Night Baseball feature. In partnership with the MLB, Apple TV+ subscribers (and for a limited time, non-subscribers) will be able to watch a live double-header on Friday evenings, complete with a live pre- and post-game show. Friday Night Baseball is free as part of Apple TV+ in eight countries, and fans in the US will also get MLB Big Inning, a live show with highlights and look-ins every weeknight. The US and Canada will get a new 24/7 live stream devoted to MLB replays, news, classic games, and more. All this baseball stuff starts as soon as the new MLB season does.

Last year, Apple gave us a purple iPhone 12. This year, it's two new green iPhone 13 models. The regular iPhone 13 and iPhone 13 mini are now available in green, while the iPhone 13 Pro and Pro Max are available in a new Alpine Green finish. Preorders start on March 12, with availability on March 18.

The next announcement from Apple was the one we all expected: a third-generation iPhone SE. It looks just like the second-gen model with an iPhone 8 body and display, only with the latest and greatest A15 processor inside. This means better performance and battery life, plus 5G capability–but only for sub-6GHz networks, not mmWave.

The iPhone SE has the same cameras as before, but the improved image processing of the A15 means better photos and videos (though it still doesn't have night mode). It starts at US$429 (AU$719). The iPhone SE goes up for preorder on March 12 and will be available on March 18. 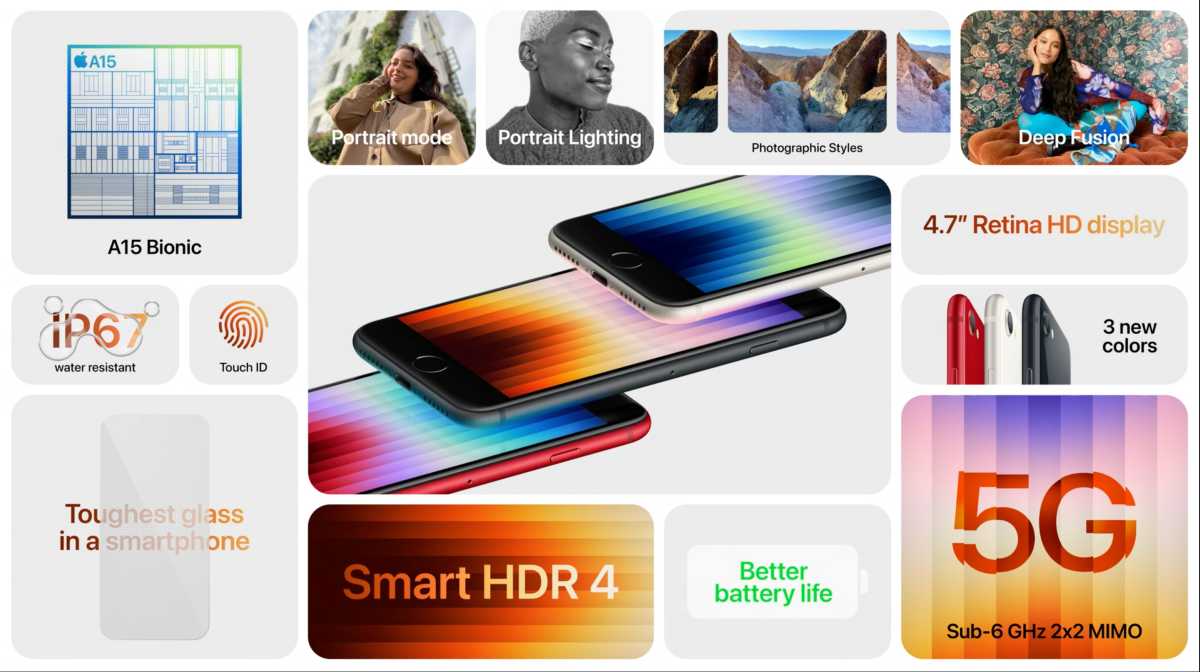 We also expected a new iPad Air update, and Apple didn't disappoint. Rather than step up from the A14 to the A15, Apple included the same M1 processor you'll find in the iPad Pro. The front camera gets an upgrade to the 12MP ultra-wide with Center Stage support, too.

The price is still US$599 (AU$929), but the cellular-equipped model, which now has 5G support costs AU$1,159. As with most of the products Apple announced, pre-orders begin on March 12 with availability on March 18.

M1, M1 Pro, M1 Max… and now M1 Ultra. That's right, Apple has a fourth variant of its M1 Apple Silicon, and it's essentially two M1 Max chips in a single package, connected by a custom high-speed interconnect. It appears to the operating system to be a single chip with 20 CPU cores, 64 GPU cores, and up to 128GB of memory. Everything else is double the M1 Max, too: double the Neural Engine for ML tasks, double the video engine, double the memory bandwidth. It's a monster of a chip, and an impressive technical feat. 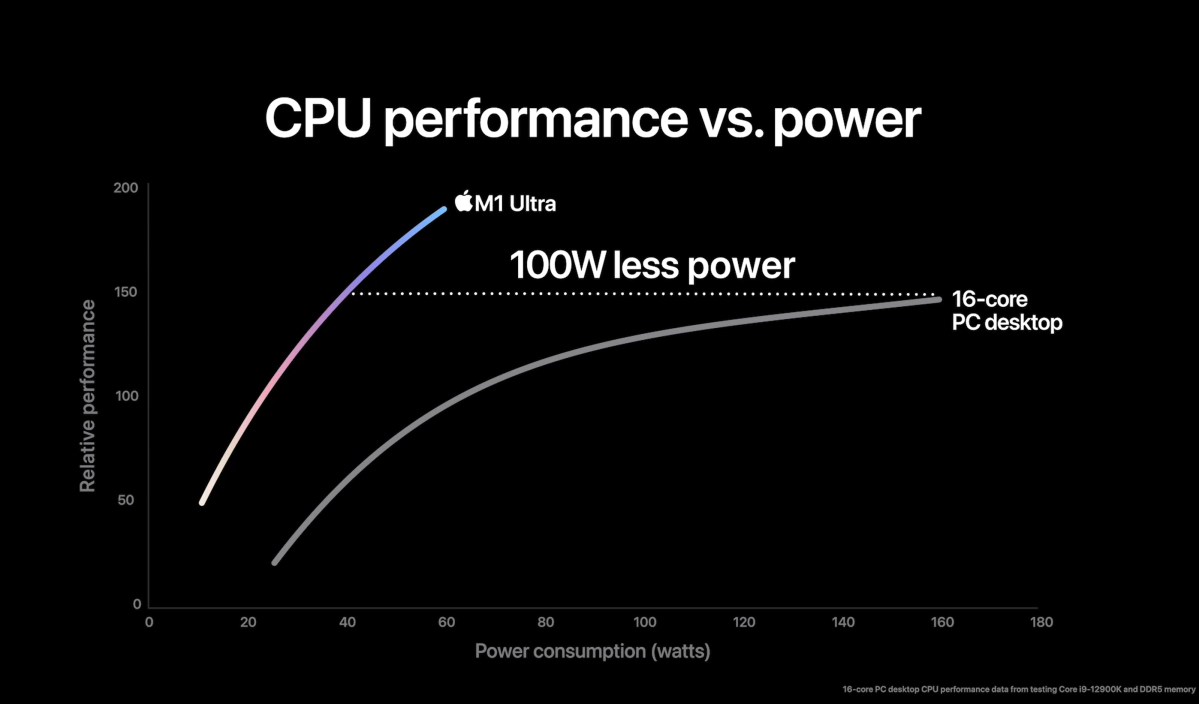 Apple says it delivers up to 90 percent more performance than the most powerful competing 16-core desktop CPU (a Core i9-129000K with DDR5 memory) when running at the same power envelope (roughly 60 watts). It can match the peak performance of said chip while using 100 watts less power.

The GPU, according to Apple, is about as fast as a GeForce GTX 3090 while using about 200 watts less power. 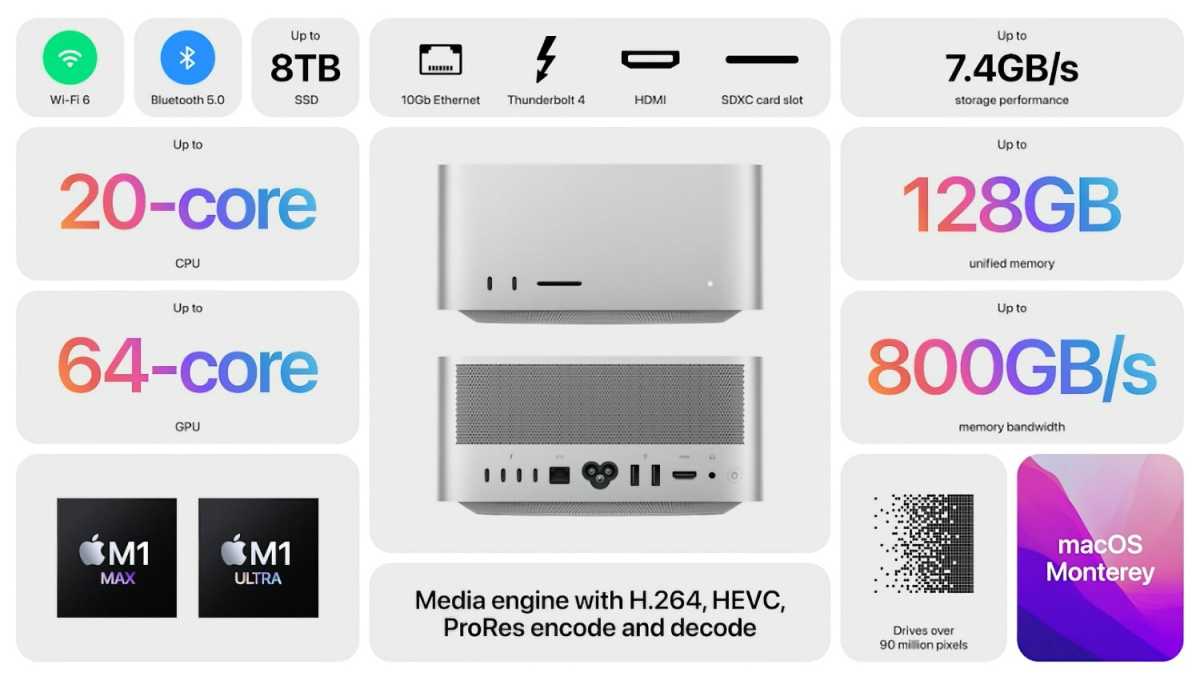 Last but not least, there's the Apple Studio Display, Apple's first new consumer display in over a decade.

The display part is almost identical to the display of the 27-inch iMac, but with much slimmer bezels: It's got the same 5k resolution, P3 Wide Color, and True Tone, but no HDR or 120Hz ProMotion.

That would hardly be enough to justify the US$1,599 (AU$2,499) starting price (you can spend more for a tilt-and-height adjustable stand or nano-texture glass), but the Studio Display is more than just a monitor. It's got an A13 inside to manage the 12-megapixel ultra wide webcam with Center Stage support, three-mic array, and six-speaker audio system with Spatial Audio. It's also got four USB-C ports (10Gb/sec) and a Thunderbolt 3 port (48Gb/sec) that can supply up to 96 watts to charge your MacBook.

Apple removed the 27-inch iMac from its lineup at this time; it's clear that the company intends those who want a bigger desktop experience than the 24-inch iMac to purchase an Apple Studio Display to go along with their Mac mini, Mac Studio, or MacBook.